Conchita Montenegro (1911-2007) was a sultry Spanish model, dancer, and stage and screen actress. She starred in several Spanish productions, but also in French, German and American films. 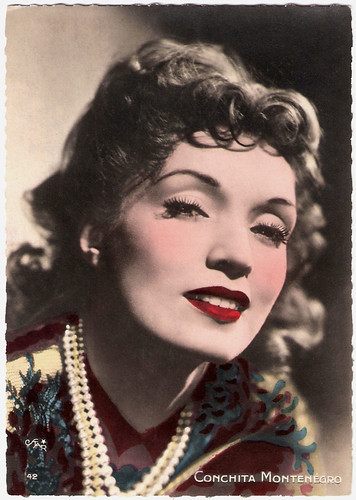 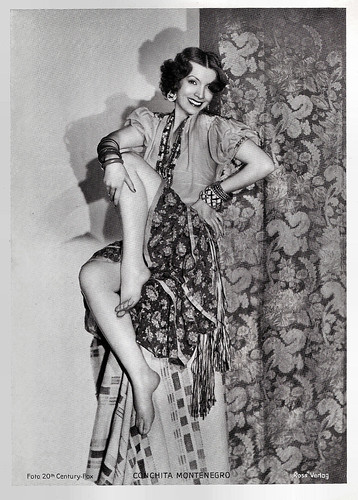 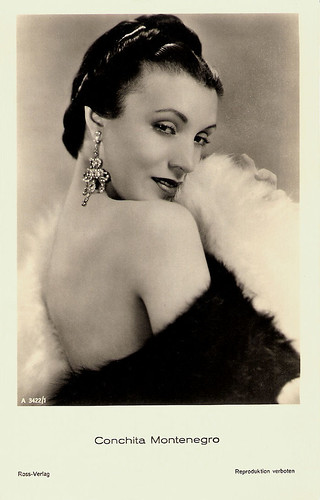 
Conchita Montenegro was born Concepción Andrés Picado in San Sebastian (Basque country) in 1911. She left her home town at the age of ten, moving to Madrid, where she was educated in a convent.

Conchita first worked as a model for the painter Ignacio Zuloaga y Zabaleta, and learned classical and Spanish dance. In her adolescence she went to Paris to follow dancing and acting lessons at the Opera school.

At her return in Spain she formed a dancing duo with her sister Juanita as Las Dresnas de Montenegro, to great acclaim in the capitals of Europe.She also toured with the Fanchon & Marco dance troupe. Montenegro supposedly revolutionised Spanish dance.

In his review at IMDb, Mario Gauci notes that Montenegro "has the requisite spunk and sensuous charge for the role". 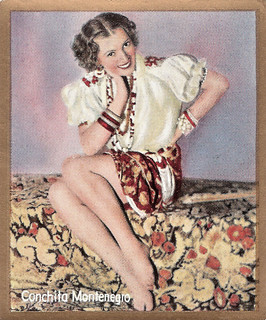 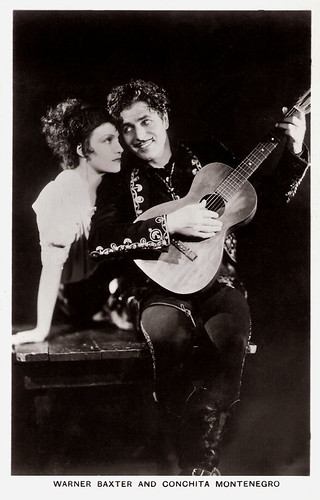 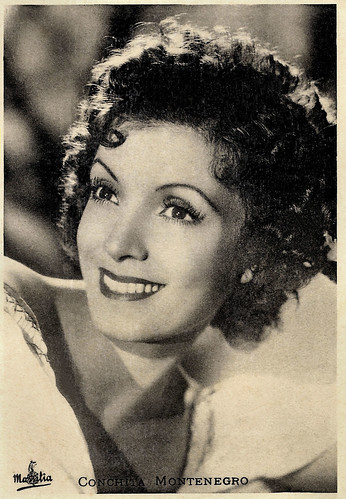 
In the summer of 1930 Conchita Montenegro went to the US when MGM offered her a contract. She was seventeen years old and could not speak English. Dubbing was not yet standard practice, so she was cast in several Spanish versions of MGM films, destined for Spain and Latin-America.

One anecdote from her Hollywood times goes that when during probing she refused to kiss Clark Gable, long-standing film expert Lionel Barrymore remarked: "That little girl [she was 18] will give us much playtime".

By mid-1931, Montenegro had left MGM and signed with Fox, where she stayed until 1935. Hans J. Wollstein at AllMovie: "Fox (...) made her a 'Fox Debutante' in 1931 along with Helen Mack and Linda Watkins. Unlike Mack and Watkins, however, the studio never really pushed Montenegro, who instead labored in stock assignments." In August 1931 she was nearly killed in a train crash near Yuma, Arizona, while en route with Warner Baxter and Edmund Lowe to shoot The Cisco Kid (1931) in Tucson.

She also acted in the Mascot Pictures production Laughing at Life (Ford Beebe, 1933) with Victor McLaglen and, again at Fox, in the French version of the film Caravan: Caravane (1934), both directed by Erik Charell and starring Charles Boyer and Annabella. Montenegro acquired the reputation of a social leader in the Spanish Hollywood film colony, leasing a large house and performing as hostess at many gatherings. 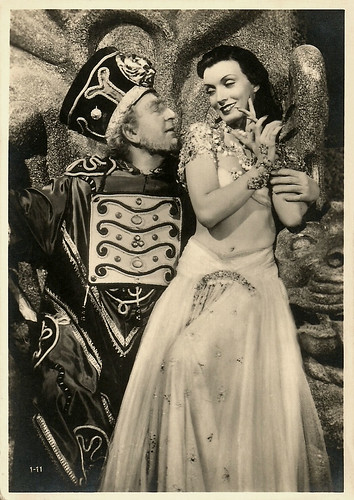 Italian postcard. Armando Falconi and Conchita Montenegro in the Italo-Spanish co-production La nascita di Salomè/The birth of Salome (1940), directed by Jean Choux, and shot in the Cinecittà studios in Rome. 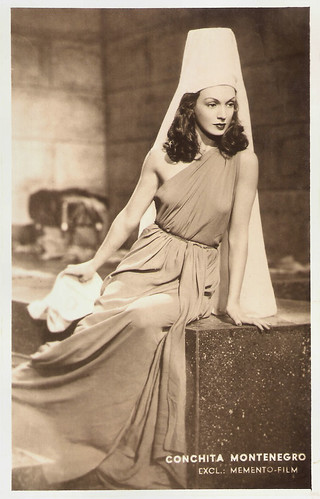 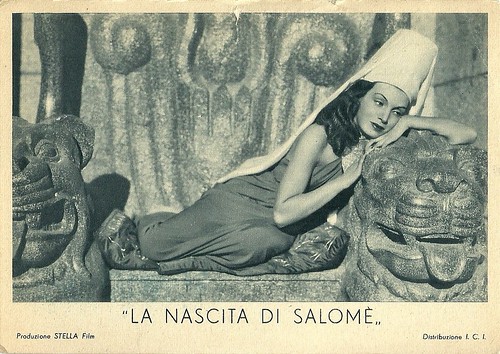 
In May 1935, at the peak of her career, Conchita Montenegro’s contract was not extended by Fox. She left for Europe, where she married Raoul Roulien in Paris in September 1935. The couple toured South America and produced a motion picture called Jangada (1936). The film dealt with the customs of primitive people in South America.

In 1939 Montegro and Roulien went to Argentine where he directed her in the Spanish version of the Brazilian film O Grito da Mocidade (directed by Roulien as well): El grito de la juventud (Raoul Roulien, 1939). Soon after they divorced.

In 1940 Montenegro went to France where she acted in L’or du Cristobal (Jean Stelli, Jacques Becker, 1940) with Charles Vanel and Albert Préjean.

In the historical biopic Melodie eterne/Eternal Melodies(Carmine Gallone, 1940), Gino Cervi starred as the young Wolfgang Amadeus Mozart and Montenegro played his unrequited first love, Aloisa Weber. The heavily fictionalised account of the life of the Austrian composer  was shot at Cinecittà in Rome.

The film Giuliano de’Medici (Ladislao Vajda, 1941) offended Benito Mussolini, as it too clearly criticised a dictator. The film was only permitted re-release after cuts and a change in ideology, while Vajda fled to Spain. In 1942 Montenegro moved on to Spain.

In Spain she returned as a big film star, after an absence of some 13 years. She played in Rojo y negro (Carlos Arévalo, 1942) with Ismael Merlo, Boda en el infierno (Antonio Román, 1942) with José Nieto, Aventura (Jerónimo Mihura, 1942) with José Isbert, and Ídolos/Idols (Florián Rey, 1943) with Juan Calvo. Ídolos about a French actress who meets a Spanish bullfighter, was made by CIFESA, Spain's largest film studio at the time.

In 1944, Montenegro married the Spanish diplomat Ricardo Giménez Arnau, a senior member of the Falangist party and ambassador to the Holy See. She henceforth refused any interviews or honors, so in 1990 she declined the Medal for Artistic Merit by the Ministry of Culture.

According to Spanish author José Rey Ximena in his book, El Vuolo de Ibis (The Flight of the Ibis), British actor Leslie Howard – whom Montenegro dated in 1931 after playing together in Never the Twain Shall Meet - used her to get close to Spanish dictator Franco, on instigation of Winston Churchill. Montenegro used her husband's influence to secure a meeting between the British actor and the Spanish dictator while Howard was in Spain on a lecture tour to promote film in May, 1943.

Shortly afterwards Leslie Howard lost his life when the civilian plane on which he was a passenger on a return flight to England was shot down by German Luftwaffe and crashed into the Bay of Biscay. "Thanks to him, at least in theory, Spain was persuaded to stay out of the war," Rey Ximena claims of Howard. 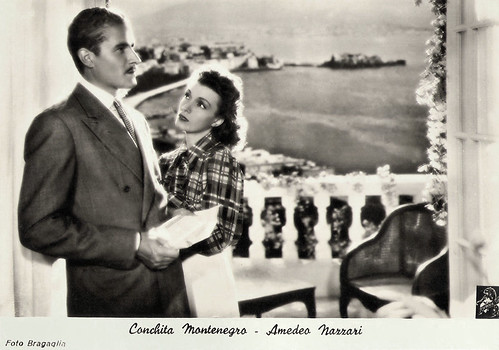 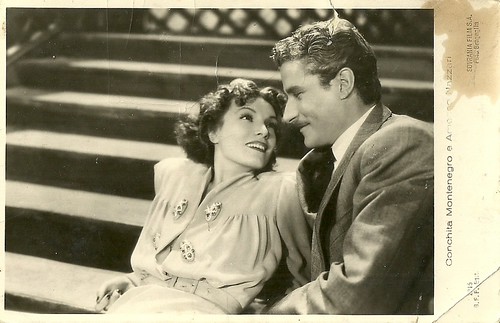 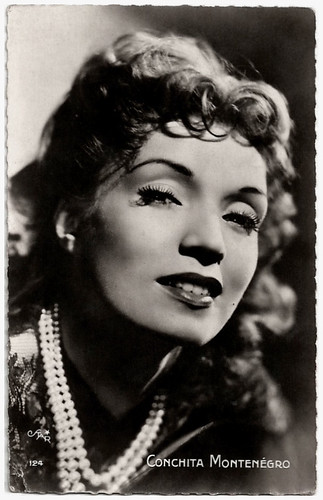