Film historian and EFSP contributor is still in Rome and today he gives a paper on the classic epic Cabiria (1914), which was the summit of the early Italian Antiquity films. Sadly, there are no postcards of this silent film, but there are many cards of its female star, Italia Almirante (1890-1941). With Cabiria, she became one of the divas of the Italian silent cinema, and worked with some of the most important Italian directors of the silent era, including Roberto Roberti, Augusto Genina and Giovanni Pastrone. From 1935 on she played on stage in Brazil, where she suddenly died when she was bitten by a poisonous insect. 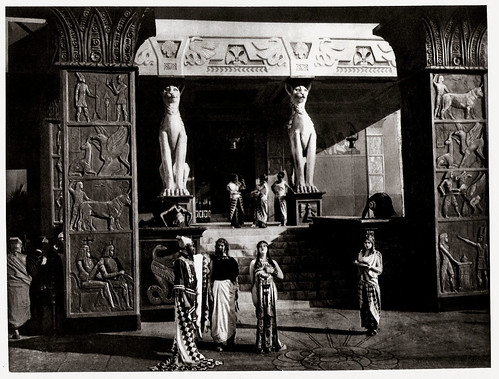 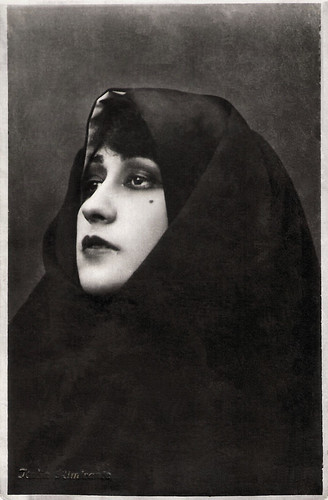 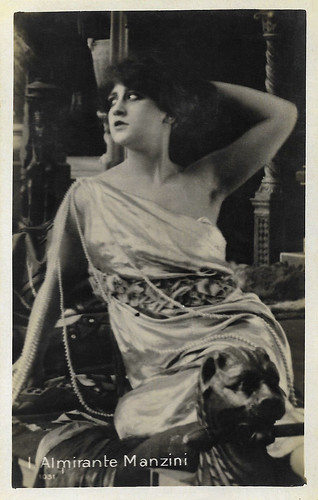 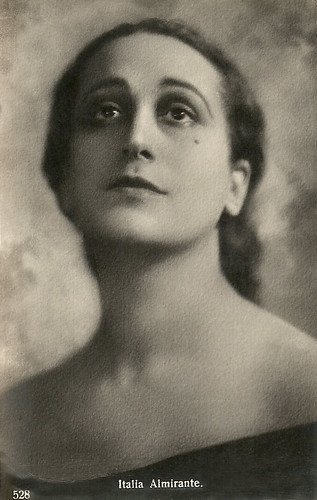 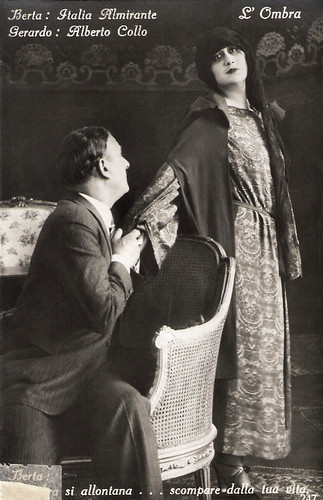 Italia Almirante was born in Taranto, Italy, in 1890. She was born into a family of theatre artists. Her father was the actor Michele Almirante, and her mother the actress Urania Dell'Este. One of her cousins was film actor Luigi Almirante.

Italia also began to appear on stage and in 1911 she made her film debut for the Cines studio in Rome, where she played the lead in Gerusalemme liberata/The Crusaders (Enrico Guazzoni, 1911) and San Francesco. Il poverello di Assisi/Saint Francis: The Poor Boy from Assisi (Enrico Guazzoni, 1911), both opposite Emilio Ghione.

She moved over to another pioneer film studio, Savoia Film in Turin. There she appeared in Sul sentiero della vipera/On the Trail of the Viper (Oreste Mentasti, 1912).

Two years later she had her breakthrough as the wicked Carthaginian queen Sofonisba in the influential costume epic Cabiria (1914). Director Giovanni Pastrone chose her for the role at the suggestion of author Gabriele D'Annunzio himself.

A million lira was budgeted for the film, a tremendous sum then, and location shooting was extended to Tunisia, Sicily and the Alps. The result was a tremendous success and it had a direct influence on D.W. Griffith's production of Intolerance (1916). 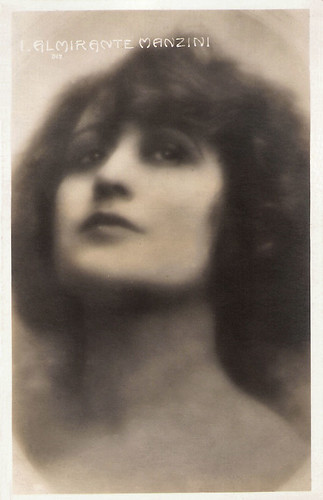 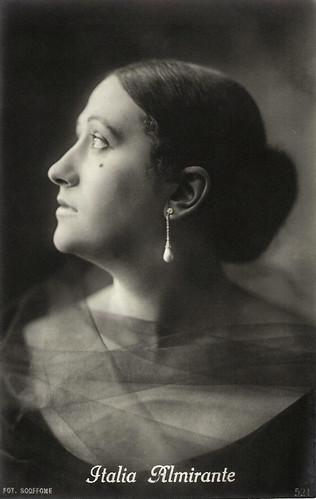 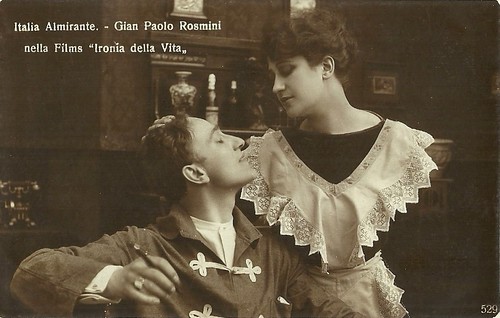 Italian postcar by Ed. A. Traldi, Milano, no. 529. Italia Almirante and Gian Paolo Rosmino in the Italian silent film L'ironia della vita (Mario Roncoroni, 1917). The film deals with Paolo who flees to the USA after a stock exchange scandal, leaving behind his wife Elena. After a year, Elena hears he died, so after another year she remarries. But then Paolo returns, having become rich as mine engineer... NB. the card writes Ironia instead of Ironie and Rosmini instead of Rosmino. 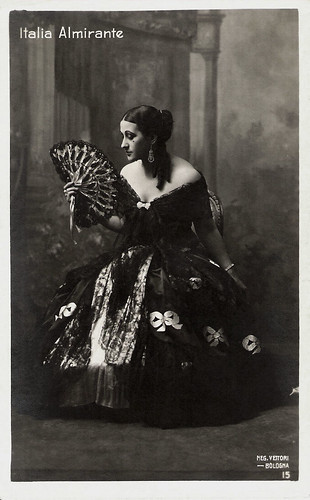 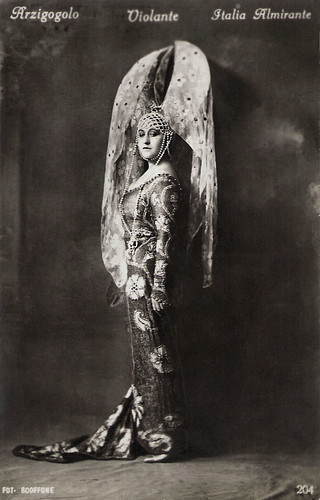 Italian postcard by Ballerini & Fratini, Firenze, no. 204. Photo: Scoffone. Publicity still of Italia Almirante Manzini as Violante in the film L'Arzigogolo (Mario Almirante, 1924), an adaptation of the play by Sem Benelli.

In particular between 1917 and 1922 Italia Almirante had an intense film career in Italy. She starred in films like Maternità/Maternity (Ugo de Simone, 1917), Femmina - Femina/Female - Female (Augusto Genina, 1918) and Hedda Gabler (Gero Zambuto, Giovanni Pastrone, 1920), based on the play by Henrik Ibsen.

She was a cousin of film director Mario Almirante who directed her in nine films between 1920 and 1926, including Zingari (1920) with Amleto Novelli and La statua di carne/The Statue of Flesh (1921) and L'ombra/The Shadow (1923). 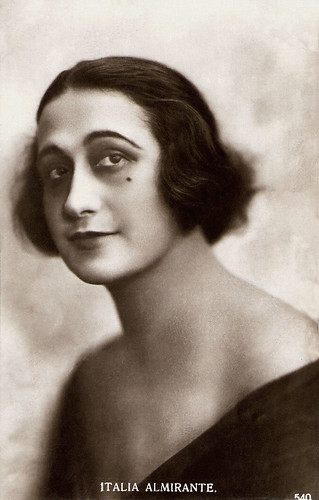 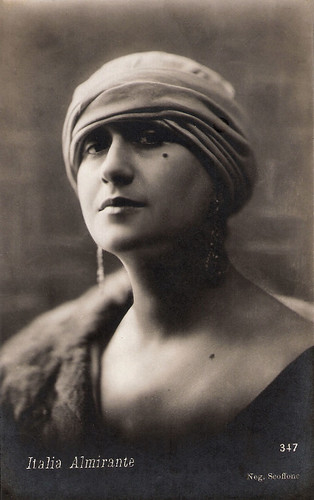 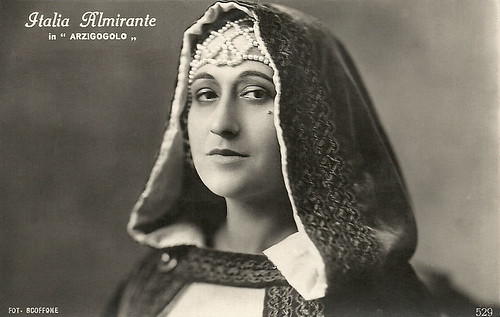 Almirante played Monna Violante, wed by her father to the rich merchant Floridoro (Oreste Bilancia), falls in love with Spallatonda (Annibale Betrone), the buffoon of count Giano (Alberto Collo), one of her suitors. After Giano has been killed by the hand of Spallatonda, the latter flees with Monna Violante.

After the mid-1920s she turned to the stage, returning to a film set only one more time, for the film L'Ultimo dei Bergerac/The Last of the Bergerac (Gennaro Righelli, 1934) with Livio Pavanelli. It would be her only sound film.

In 1935 she went on a stage tour across Brazil, and decided to stay there. In 1941 Italia Almirante Manzini suddenly died in São Paulo. The cause was a poisonous insect. She was only 51.

Recently, a book about the Almirante family was presented, Da Pasquale a Giorgio Almirante. Storia di una famiglia d’arte (Marsilio, 2016), written by one of the descendants of the family, Pasquale Almirante. 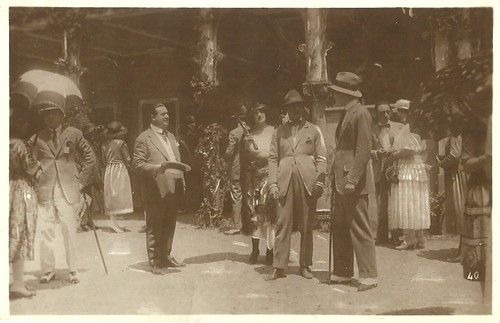 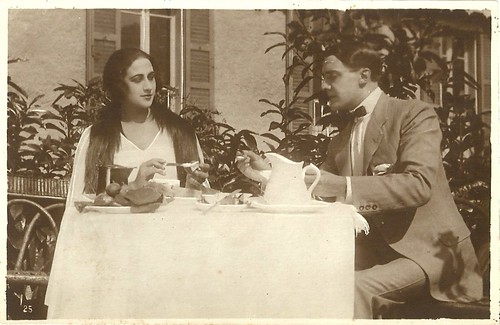 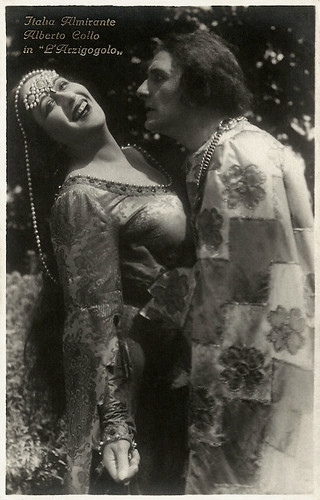 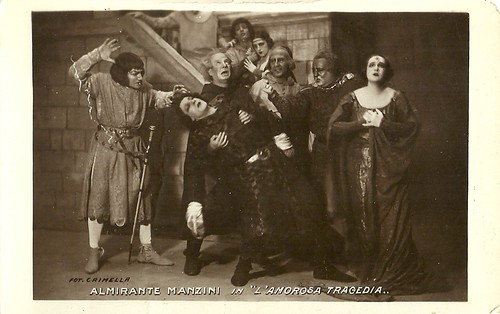 Italian postcard. Photo: Crimella. Italia Almirante in the Italian stage play L'amorosa tragedia (1925) by Sem Benelli and directed by Luigi Almirante. The play was staged by Almirante's own stage company. A young Vittorio De Sica acted in this play as well.

Great post. Had no idea Italia Almirante had died after being bitten by a poisonous insect. I wonder where in Brazil she was acting when that happened.

One minor correction about one of your links: O Falcao Maltes is in Portuguese, not Spanish.

Thanks. I'll change the mistake.