Scottish actress Maureen Swanson (1932-2011) was a pretty, elegant, brunette leading lady in British films of the 1950s. After her marriage in 1961, she retired and in 1969 she became Countess of Dudley. 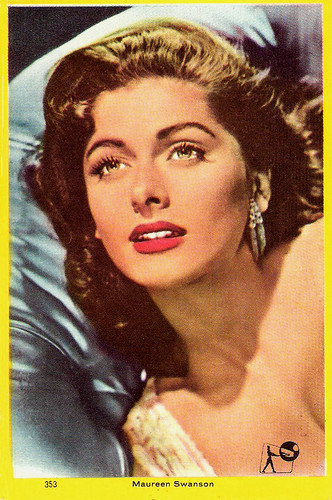 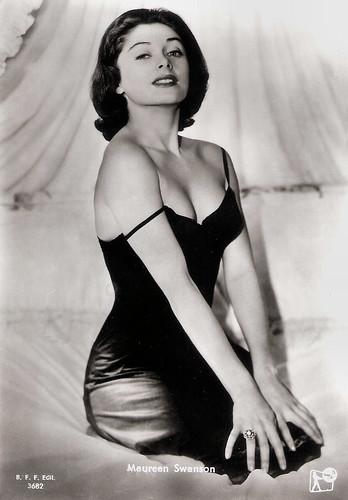 
Maureen Swanson was born in Glasgow, Scotland in 1932. Her father James Swanson was a businessman.

When her parents immigrated to South Africa, she decided to stay behind in Great Britain. She was educated at schools and convents in Scotland, before she went to Paris to study ballet.

She soon won a place at the Sadler's Wells Ballet School and then the company itself, for which she had a featured role in The Haunted Ballroom, choreographed by Ninette de Valois. This gave her the chance, aged 19, to take over the important dancing role of Louise in Rodgers and Hammerstein's Carousel at the Theatre Royal, Drury Lane, in 1951.

She made her film debut in John Huston’s drama Moulin Rouge (1952) which was shot at Shepperton Studios in England. She played the aristocratic girl who rejects a proposal of marriage from Henri de Toulouse-Lautrec (José Ferrer), telling him no woman will ever love him, which prompts him to leave his childhood home in despair to begin a new life as a painter in Paris.

In 1952 Errol Flynn gave her a much-publicised kiss at the London airport and there was talk of Flynn giving her a contract, but she said no. She appeared in MGM's first CinemaScope feature, the spectacular Knights of the Round Table (Richard Thorpe, 1953) starring Robert Taylor and Ava Gardner.

Swanson appeared in memorable films like The Valley of Song (Gilbert Gunn, 1953), and the British Film Noir Third Party Risk (Daniel Birt, 1954) opposite Lloyd Bridges. In 1955 she made her TV debut in Great Britain, although she had already acted and danced in a series of six films made for the American television. 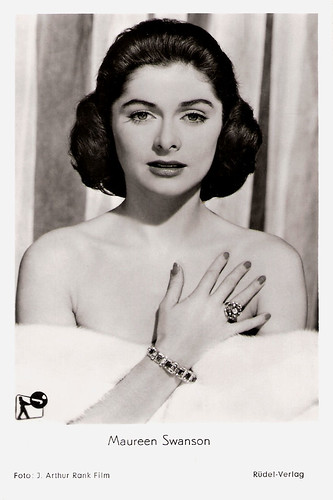 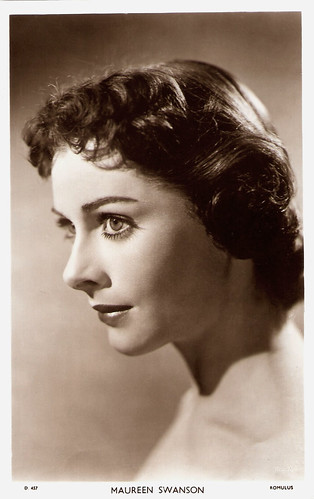 Up in the World


In 1956 Maureen Swanson appeared in four films. Her first film under contract to Rank, A Town Like Alice (Jack Lee, 1956) with Peter Finch and Virginia McKenna, was her best by far. It covers how a small group of women and children were force-marched through Malaysia by the Japanese during the second world war. In the film, Swanson, the youngest and prettiest of the women, flirts with any available man and even goes off with a Japanese officer.

She starred opposite Norman Wisdom in the comedy Up in the World (John Paddy Carstairs, 1956). She had a secondary role in Jacqueline (Roy Ward Baker, 1956). And in The Spanish Gardener (Philip Leacock, 1956) she appeared as the girlfriend Dirk Bogarde.

In 1956 she was also introduced to the Queen at the Royal Film Performance of The Battle at the River Plate at the Empire Theatre in London. Along with her were Marilyn Monroe, Victor Mature, Anthony Quayle, and others.

The following year she received good reviews for her role in the in Australia situated adventure film Robbery Under Arms (Jack Lee, 1957) starring Peter Finch, but it was to be her last feature film.

The following year, she only appeared further in a TV production of The Importance of Being Earnest (1958). 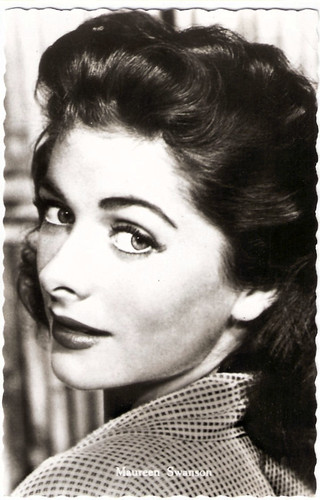 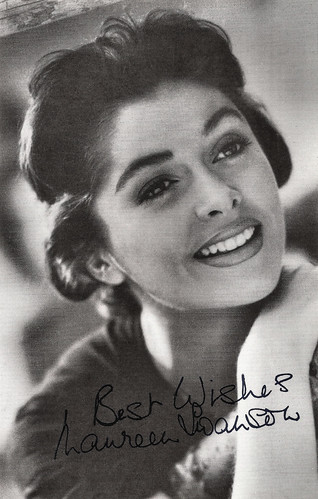 
In 1961 Maureen Swanson married William Ward, who in 1969 became the 4th Earl of Dudley. Their first child, a son named William, was stillborn in 1961. Later, they had six children, including documentary filmmaker Leander Ward (1971). Actress Rachel Ward is their niece.

As the Countess of Dudley, she managed the couple's homes in Cottesmore Gardens, Kensington, London and Devon. She also served as a lady in waiting to Princess Michael of Kent.

A few heavily publicised libel cases made sure she was not entirely out of the public eye. First, in 1987, the countess won £5,000 in libel damages from the Literary Review for a review of a book about ladies-in-waiting which, she claimed, had made her out to be a greedy and vulgar woman.

In 1989, she won again 'substantial' damages from the publishers of Honeytrap: the Secret Worlds of Stephen Ward by Anthony Summer and Stephen Dorril. The authors suggested that Swanson had been one of the 'popsies' whom Stephen Ward had procured for his influential friends.

Lady Dudley testified that she and Ward had an affair in the early 1950s. She became friends with the osteopath and artist when he was commissioned to draw her portrait in 1953, This was 10 years before he became one of the central figures in the notorious affair around former war minister John Profumo.

In 2002, the Countess of Dudley again accepted substantial libel damages from the publishers of Christine Keeler: The Truth At Last, Keeler's own account of the events surrounding her affair with John Profumo, in which she referred to Lady Dudley as having been 'one of Stephen’s girls'.


Norman Wisdom and Maureen Swanson in Up In The World (1956). Source: 0swproductions0 (YouTube).

Happy PFF ~ lovely card and I enjoyed the history too! Oooo if that card could talk! Have a great day!

Wish I had my collection of film star photos that I ordered through the magazines in the 50s. I had oodles of them, but they are long gone. I enjoyed your post.

Fabulous, but in france, Maureen is unknown.
But, your post is very interesting for the fan of cinema as I am.