Swedish actress Anita Björk was a leading lady of the Swedish theatre with more than 80 roles. Björk repeatedly worked for Ingmar Bergman, both onstage and onscreen. The slender, dark-haired beauty played in over 50 films and TV-series. Her international breakthrough came with the title role in Alf Sjöberg's Strindberg adaptation Fröken Julie/Miss Julie (1951) which won the grand prize at Cannes. Hollywood winked at ‘the new Garbo’, but when the studios learned that she was an unwed mother, they shied away. 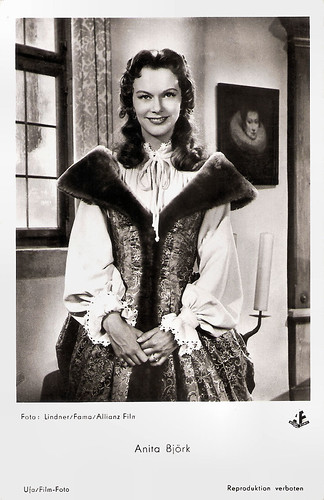 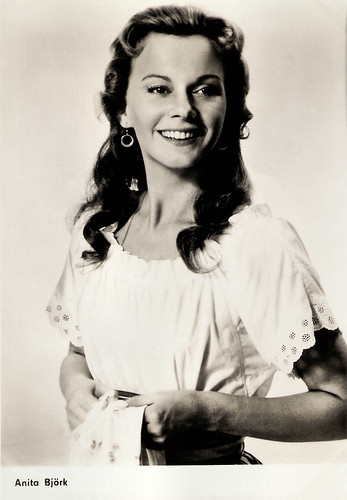 A cool aura not unlike that of Greta Garbo


Anita Barbro Kristina Björk was born in Tallberg, a town in central Sweden.

She was bitten by the acting bug in her teens and went to Stockholm. There she attended the acting school of the Royal Dramatic Theater, known as Dramaten, in 1942-45 with Mai Zetterling, the actress who later became Sweden's most recognized female film director.

Björk quickly got major roles. In 1942 she also made her film debut with a small role in the monumental classic Himlaspelet/The Heavenly Play (Alf Sjöberg, 1942), about a poor farmer (Rune Lindström) who makes a deal with devil. Other small parts followed in films like the thriller Det kom en gäst/A Guest Is Coming (Arne Mattsson, 1947).

In his obituary for Variety, Jon Asp writes: “Bjork was considered the leading lady of Swedish theater, with a cool aura not unlike that of Greta Garbo. Bjork's deep, self-restrained voice was impossible to confuse with anyone else's.”

She played in several films, including Kvartetten som sprängdes/The Quartet That Split Up (Gustaf Molander, 1950). Bjork's international breakthrough came with the title role in the film Fröken Julie/Miss Julie (Alf Sjöberg, 1951), based on the famous play by August Strindberg.

Narrias Thuresson writes at IMDb: “Anita Björk is able to use simple means to give depth and character to a role. She has a way of expressing any emotion just by raising an eyebrow or twitching her lips. This was something she used to a large extent in her best movie, Alf Sjöberg's Fröken Julie (1951) where she played the young lady at a country manor, planning to elope with Jean the butler.” The film won the grand prize at the Cannes Film Festival. 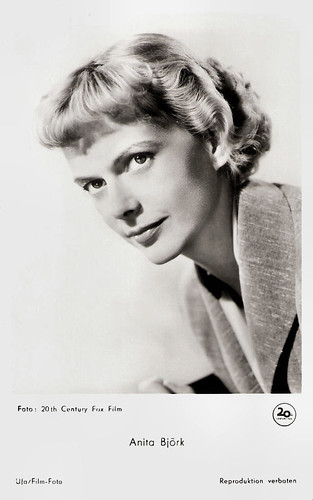 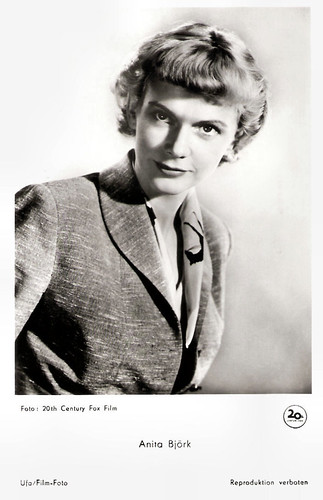 An invitation from Hollywood


After the success of Fröken Julie, Anita Björk was acclaimed by American newspapers as ‘the new Garbo’ and received an invitation from Hollywood. She was offered the female lead in Alfred Hitchcock's I Confess (1953), but suddenly the offer was withdrawn and the role was ultimately played by Anne Baxter.

Earlier, Björk had met and fallen in love with Stig Dagerman, one of Sweden’s most important writers. In 1951 she had given birth to their daughter Lo. The three of them had gone to Hollywood for Anita to negotiate the role in I Confess. But when word came out that Björk wasn't married to Dagerman, Hollywood immediately lost interest.

Dagerman’s divorce from his ex-wife wasn't final until 1953 and Hollywood did not accept a contract player who lived with someone married to somebody else and who was an unmarried mother. In 1953, Dagerman and Björk could finally marry.

For Twentieth Century Fox, Anita Björk then starred opposite Gregory Peck in the Cold War thriller Night People (Nunnally Johnson, 1954), shot in England and Germany. She also appeared with Karlheinz Böhm in the German production Die Hexe/The Witch (Gustav Ucicky, 1954). But when the films failed at the box office, so did her international career.

Björk soon moved back to Stockholm. At the end of 1954, her husband Stig Dagerman committed suicide. Björk decided to stick to the Royal Dramatic Theatre where she would appear in more than 80 roles through the years. 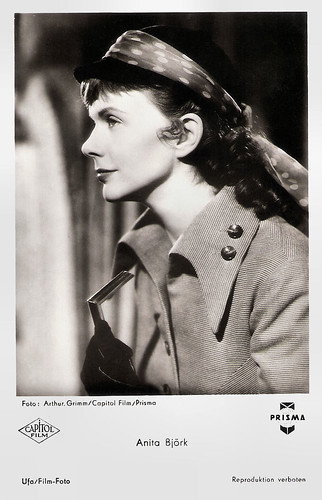 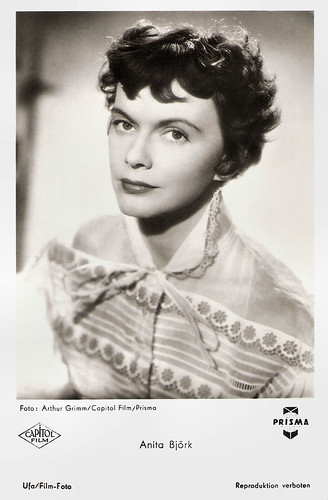 Björk performed in 12 productions by famous director Ingmar Bergman. First, she played in his film Kvinnors väntan/Waiting Women (Ingmar Bergman, 1952). And at the end of her career in 1998, she performed in his TV film Bildmakarna/The Image Makers (1998).

Bildmakarna was based on the play by Bergman’s son-in-law Per Olov Endquist. It is a fictionalized dramatization about the making of Bergman's favorite film, Körkarlen/The Phantom Carriage (Victor Sjöström, 1921). Bergman saw this classic of the silent Scandinavian cinema reportedly over 100 times, and the film prompted him to become a film-maker.

In Bildmakarna Björk offered a memorable interpretation of Swedish writer and Nobel laureate Selma Lagerlöf on whose novel Körkarlen/The Phantom Carriage was based. The play, also directed by Bergman, went on tour in Europe and also played the Brooklyn Academy of Music in New York.

In 2012, Anita Bjork died in her hmetown Stockholm. She was 89. Before Stig Dagerman, Björk had been married to actor Olof Bergström (1945-1951). Their son is actor Jonas Bergström. After Dagerman's death, she had a relationship with novelist Graham Greene.