Brunette, dark-eyed Austrian actress Maria Andergast (1912-1995) appeared in more than 60 films between 1934 and 1974. Nicknamed 'Mariandl' (after her biggest hit song), she starred in operettas, musical comedies, Heimatfilms and romantic melodramas, in addition to performing chansons and Lieder in cabaret. During the war she appeared in two Nazi propaganda films. 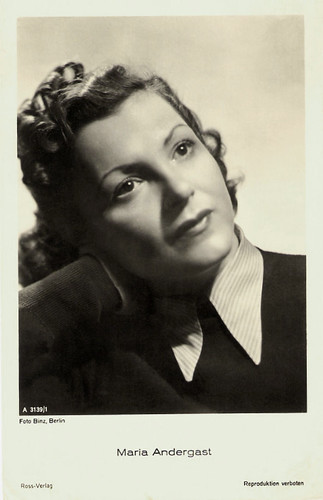 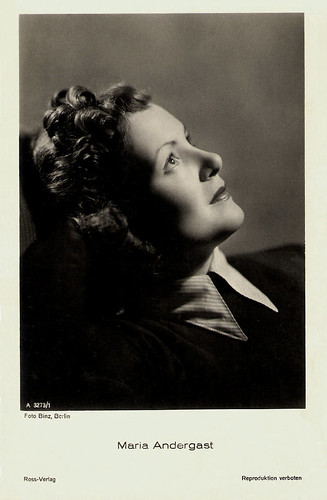 The bride faithfully waiting in her mountain village


Maria Andergast was born Maria Pitzer in 1912 in Brunnthal an der Alz, in Austria. At the age of 2, she lost her parents. She grew up with relatives in Vienna and took their names.

Maria took dance lessons with Grete Wiesenthal, but a serious traffic accident destroyed her dreams of a dance career. Instead, she took acting lessons with Josef Danegger at the Akademie für Musik und darstellende Kunst Wien.

In 1928, she had her first stage work in the city of Aussig (now Ústí nad Labem in the Czech Republic). At the Stadttheater Aussig she made her debut in the play Vater sein dagegen sehr. Later she worked at the German Landestheater in Prague and at the Theater in der Josefstadt in Vienna.

In 1932, Maria Andergast was discovered for the screen by actor-director Luis Trenker, but she had to cancel the role that he offered her in his film Der Rebell/The Rebel (Kurt Bernhardt, Edwin H. Knopf, Luis Trenker, 1932) because of scheduling problems. The collaboration with Trenker came in his masterpiece Der verlorene Sohn/The Prodigal Son (Luis Trenker, 1934), in which she embodied the bride, who faithfully waits in her mountain village for her wandering boyfriend.

In her second film, Abenteuer eines jungen Herrn in Polen/The Adventures of a Young Master in Poland (Gustav Fröhlich, 1934), she played a Russian countess, who must renounce her love for an Austrian officer (Gustav Fröhlich) under the political conditions of the First World War.

After that she was immediately given the opportunity to play further main roles in successful films like Der Vogelhändler/The Bird Seller (E.W. Emo, 1935) and Skandal um die Fledermaus/Scandal at the Fledermaus (Herbert Selpin, 1936) with Viktor de Kowa.

German Wikipedia: “She played sweet, simple, basic girl types, who, despite a certain inclination to melancholy, are prepared to fight for their happiness. That this happiness was usually quite conventional, and that the possibilities for action of these female figures were often limited to the option of an heroic renunciation, did not damage Maria Andergast's popularity.”

In 1936 Andergast married film director Heinz Helbig and she played leading roles in three of his films. She went with him to Berlin, where she continued to be engaged in the theatre. From 1939 onwards, she lived and worked mainly in Vienna, but as a stage actress she also travelled to Rome, Warsaw, Switzerland and Sweden.

During the Second World War, Andergast appeared in two Nazi propaganda films, Spähtrupp Hallgarten (Herbert B. Fredersdorf, 1941) and Sechs Tage Heimaturlaub (Jürgen von Alten, 1941). For the first time she also received an offer for an artistically interesting film role: in E.W. Emo's Der liebe Augustin/The Dear Augustin (1940) she could show a bit more of her acting talents as a friend of the title figure. 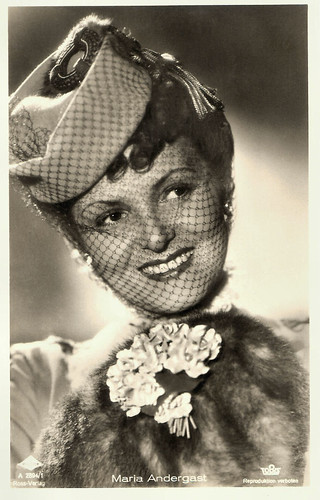 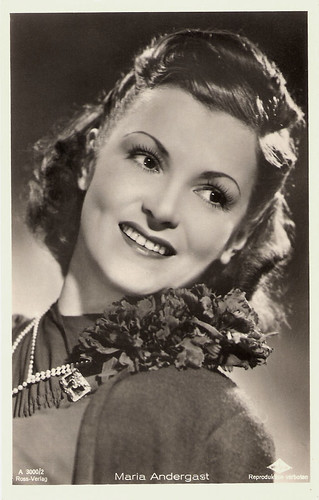 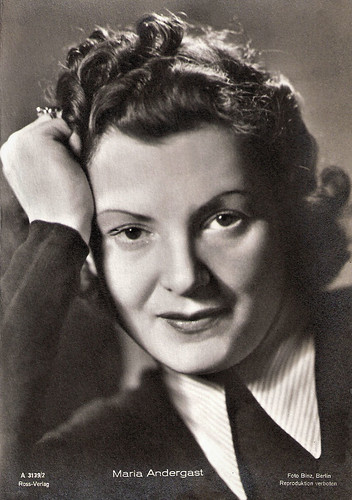 A second career as Schlager singer


After the end of the Second World War, Maria Andergast performed at the Theater in der Josefstadt and at the Residenztheater in Munich. Another interesting film role followed in 1946, when Andergast played the slanderous wife of a war hero (Rudolf Prack) in the first Austrian post-war film Der weite Weg/The Long Way (Eduard Hoesch, 1946).

In her next film, Der Hofrat Geiger/Counsellor Geiger (Hans Wolff, 1947), she performed the song Mariandl, composed by Hans Lang. This formed the starting point for a second career as a singer for Andergast. She also sang the Schlager Du bist die Rose vom Wörthersee (You are the rose of Lake Wörther) by Hans Lang in 1950.

Since then, she only appeared in supporting parts. After suffering serious injuries in 1966, she entered into a long professional break. Since the 1960s, Maria Andergast was occasionally seen in television productions. In 1972, she relocated from Munich to Vienna. In the following year, she was awarded the silver honorary needle of the State of Vienna.

In 1974, she made her final film, the Heimat-melodrama Der Gestohlene Himmel/The Stolen Heaven (Theo Maria Werner, 1974).

In 1995 she died of cancer. Parts of her estate are now in the Potsdam Filmmuseum. Maria Andergast was married three times: with the director Heinz Helbig, the actor Siegfried Breuer and the actor and director Richard Häußler (1958-1964, until his death). With the director Franz Antel, who staged five of her films from 1950 onwards, she was engaged for a long time. In 2002 the Maria-Andergast-Weg was named after her in Donaustadt, Vienna. 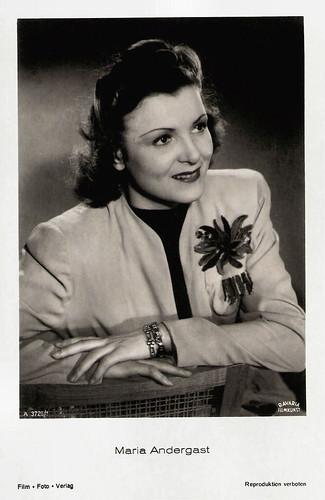 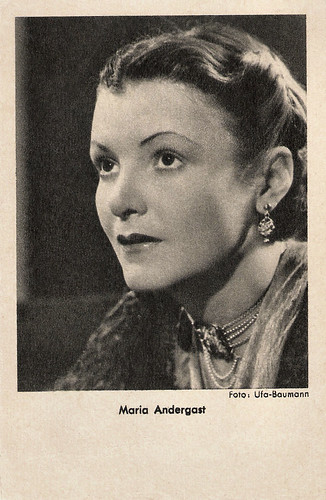 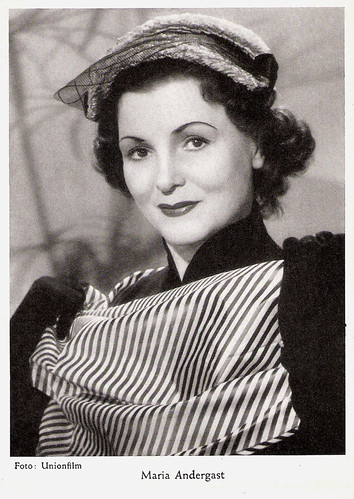