French actress Jeanne Moreau, one of biggest stars of the European cinema, has died today at the age of 89. Moreau was found dead at her home in Paris. The legendary film star was the personification of French womanhood and sensuality. Moreau (1928-2017) had a diverse career: she was a magnificent stage and film actress, a producer, screenwriter and film director, a successful singer with a substantial recording career, and a theatre and opera director. She combined off-kilter beauty with strong character in Nouvelle Vague classics as Ascenseur pour l'échafaud (1958) and Les amants (1959). Her role as the flamboyant, free-spirited Catherine with her devil-may-care sensuality in Jules et Jim (1962) is one of the greatest performances in the history of the cinema. Throughout her long career with more than 130 films, Jeanne Moreau worked with some of the most notable film directors ever. 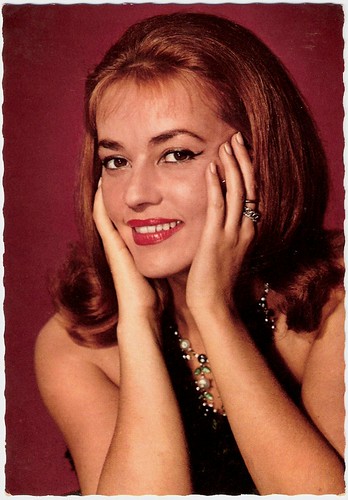 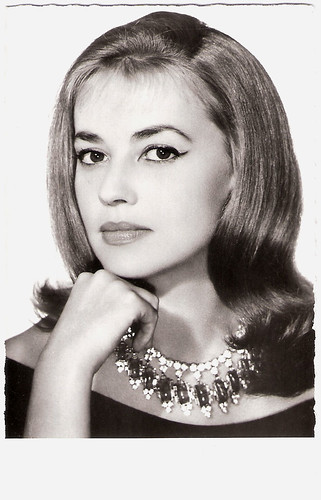 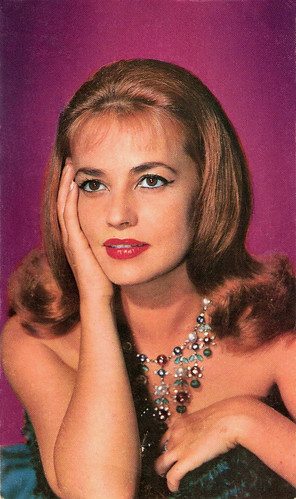 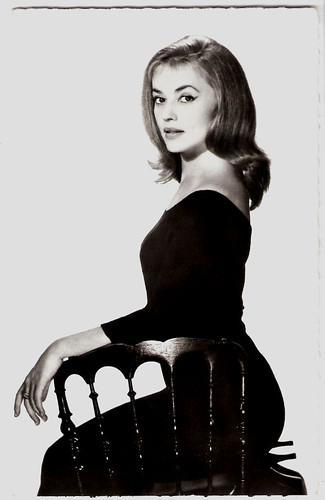 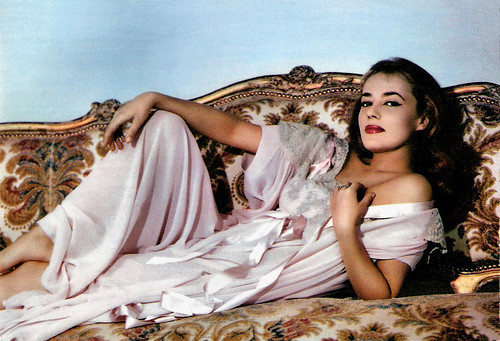 Jeanne Moreau was born in 1928, Paris, France. Her father, Anatole-Désiré Moreau, owned a restaurant in Montmartre, Paris. Her mother, Katherine Buckley, was an English dancer who had come to the Folies Bergère with the Tiller Girls.

When her parents divorced in the late 1940s and her mother returned to England, Jeanne remained with her father in Montmartre. Opposing her father's wishes, she decided to become an actress. She trained for the stage at the Paris Conservatoire, and made her theatrical debut in 1947 at the Avignon Festival.

In 1948, when she was only 20 years old, she became the youngest full-time member in the history of the Comédie-Française, France's most prestigious theatrical company. Her first play was Ivan Turgenev's A Month in the Country, directed by Jean Meyer. She soon was one of the leading actresses of the troupe and was recognised as the prime stage actress of her generation.

She left in 1951, finding the Comédie-Française too restrictive and authoritarian, and joined the more experimental Théâtre Nationale Populaire. 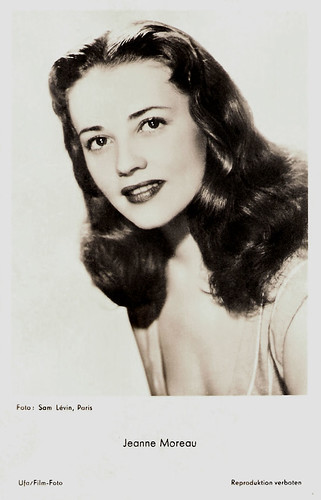 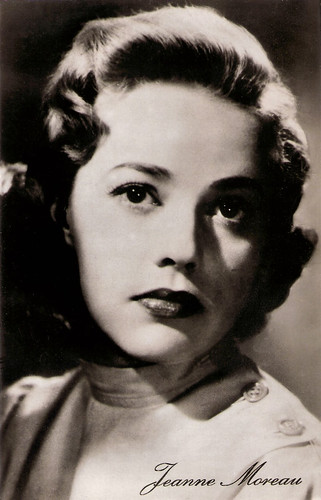 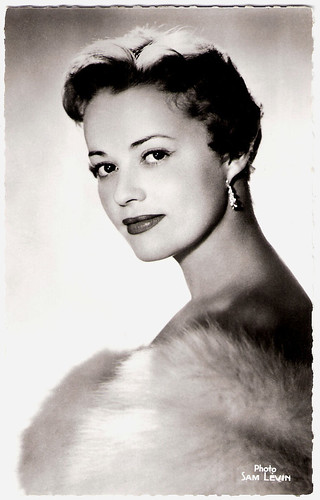 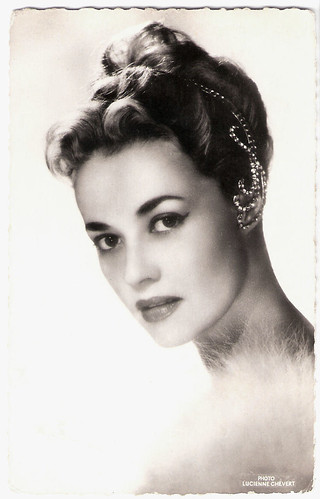 Jeanne Moreau was almost 30 before her film career really took off thanks to her work with first-time director Louis Malle. His murder mystery Ascenseur pour l'échafaud seemed to be in the same thriller genre as her earlier films, but after seeing the first week of dailies for Ascenseur the technicians at the film lab went to the producer and said: “You must not let Malle destroy Jeanne Moreau”.

Louis Malle later explained: “She was lit only by the windows of the Champs Elysées. That had never been done. Cameramen would have forced her to wear a lot of make-up and they would put a lot of light on her, because, supposedly, her face was not photogenic”.

This lack of artifice revealed Moreau's ‘essential qualities’: "she could be almost ugly and then, ten seconds later, she would turn her face and would be incredibly attractive. But she would be herself.”

Ascenseur pour l'échafaud/Elevator to the Gallows (Louis Malle, 1958) was immediately followed by the controversial Les amants/The Lovers (Louis Malle, 1958). Moreau starred as a provincial wife who abandons her family for a man she has just met. Her earthy, intelligent and subtle portrayal of the adulteress caused a scandal in France. 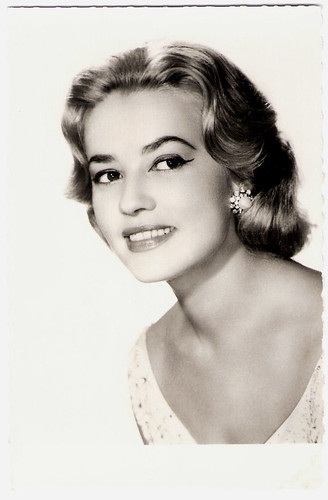 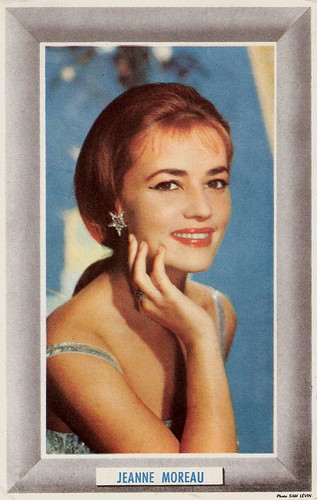 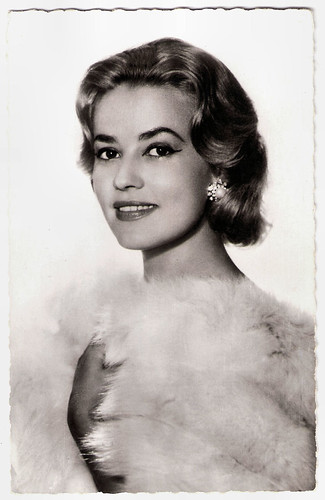 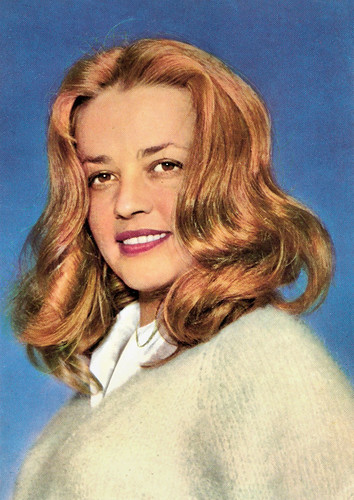 Italian postcard by Rotalcolor, Milano, no. 258.

Jeanne Moreau went on to work with many of the best known Nouvelle Vague (New Wave) and avant-garde directors. Her most enduring role is the flamboyant and magnetic Catherine in Truffaut's explosive Jules et Jim/Jules and Jim (François Truffaut), 1962.

Her teaming with Brigitte Bardot in Viva Maria! (Louis Malle, 1965) was one of the major media events of 1965. Thanks to the on-screen chemistry between the two top French female stars of the period, the film became an international hit. Five years after Jules et Jim, she worked again with François Truffaut, starring as an icy murderess in the popular Alfred Hitchcock homage La mariée était en noir/The Bride Wore Black (1967).

She won the Best Actress Molière Award (the French equivalent of the Tony) in 1988 for her acclaimed performance in Hermann Broch's Le récit de la servante Zerline, a huge theatrical success which toured 11 countries. Moreau also enjoyed success as a vocalist. She released several albums and once performed with Frank Sinatra at Carnegie Hall.

Her name has been often associated, both socially and professionally, to that of writer-director Marguerite Duras. Apart from their close friendship, Moreau starred in two films based on Duras' novels, Moderato cantabile/Seven Days ... Seven Nights (Peter Brooks, 1960) and The Sailor from Gibraltar (Tony Richardson, 1970). Duras herself directed Moreau in Nathalie Granger (1972), and she was the narrator in another Duras screen adaptation, L'amant/The Lover (Jean-Jacques Annaud, 1992). She even went on to portray Duras in the biopic Cet amour-là/This Love (Josée Dayan, 2001).

Other major literary figures among her close friends were Jean Cocteau, Jean Genet, Henry Miller, and Anaïs Nin. Jeanne Moreau was the president of Equinoxe, an organisation which supports new European scriptwriters. 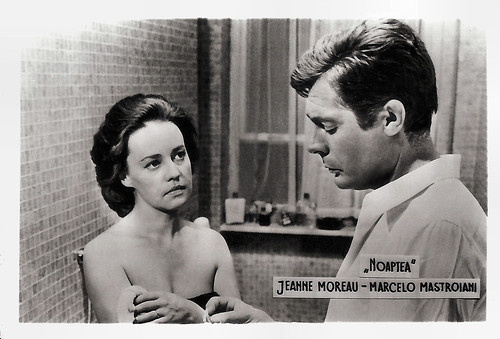 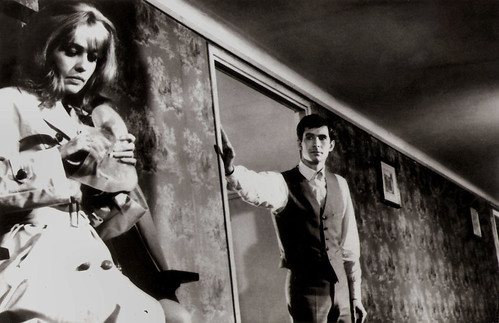 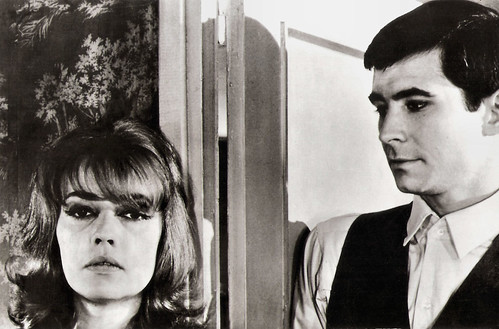 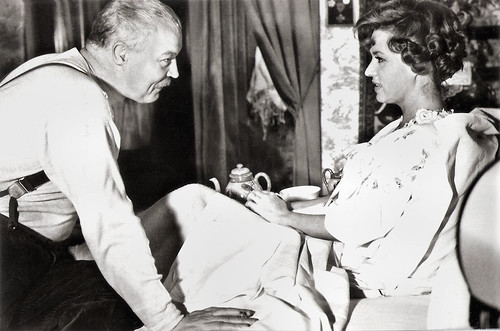 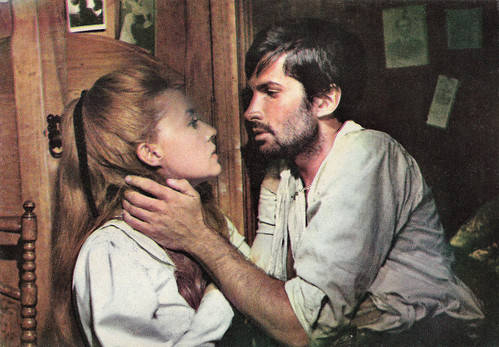 As her leading-lady days began to wane, Jeanne Moreau made a graceful transition to character parts. She used her standing in the French industry to foster the careers of young directors such as Bertrand Blier, in whose 1974 feature Les valseuses/Going Places, she gave a cryptic but memorable performance, and Andre Techiné.

In 1975 she made her debut as a director with Lumière/Light (1975), the story of several generations of actresses. She also wrote the script and played Sarah, an actress the same age as Moreau. She also helmed L'Adolescente/The Adolescent (1978), a semi-autobiographical tale of a girl sent to live with her grandmother in 1939, and Lillian Gish (1984), an homage to the silent screen heroine.

She was the only actress who has presided twice over the jury of the Cannes Film Festival (in 1975 and 1995) and she was president of the jury at the Berlin Film Festival in 1983. She has won a number of honours, including two BAFTA Awards, three Cesars (the French Oscar), a Golden Lion for career achievement at the 1991 Venice Film Festival and a 1997 European Film Academy Lifetime Achievement Award.

In 1998 the American Academy of Motion Pictures presented her a life tribute. She also was made a Fellow of the British Film Institute in recognition of her outstanding contribution to film culture. And she was chosen by Empire magazine as one of the 100 Sexiest Stars in film history (#76) in 1995.

Good Morning! I just wanted to tell you that I was having a little bit of trouble listening to the clips because a German clip is opening up automatically from somewhere. I scrolled through but couldn't find the source so that I could turn it off:) I really am wowing my in laws with all of my French film Star knowledge! Happy PFF!

what a seductress! by the way, i answered your barrage of questions in my blog, but i'll paste it here for your convenience. :)

the name "lady dive" really has a royal ring to it, doesn't it? hehe. the bus first drives you around downtown ottawa to see the landmarks, then you plunge into ottawa river to see the parliament from the water. the rideau canal is nearby but we didn't go there.

it's a fun ride, cost us $30CAN each. the tour guide we had was bilingual so he talked in french and english.

there are lots of souvenir shops across the parliament selling postcards, and in fact, the post office itself is near the parliament. being the capital city, lots of people there must do a lot of mailing...including the tourists.

i hope i satisfied your curiosity! :)

Excuses, Marie, for letting fubbed Ursula Andress in Dr. No disturbing the sound of the Jeanne Moreau clips. I've made her shut her mouth up, so you can enjoy Jeanne and Miles Davis fully now.

And thanks for all your answers, fortuitious faery. You really satisfied my curiosity thoroughly.

Hi Bob,
Another great post, she ceratinly is a beauty.
Debby

Never disappointing...I loved this post. Although I should know the name / the actress Jeanne Moreau, I don't recall ever seeing any of her work. She is quite lovely....
I shall have to go searching for a film or two. Thank you for sharing.

Have a beautiful weekend.

Jules et Jim was on American TV last night....
I always learn so much from your entries. thanks.

I loved Jeanne Moreau. She had fascinating lips...rather pouty.
Judy

Very interesting! I always learn so much from your posts!

your blog has so many interesting things! :) Jeanne Moreau is pretty, great post

have a good weekend xx

Your choices are always fascinating! I only wonder why you didn't feature Jeanne Moreau long before this.

Thanks everybody, and especially Marie, it was again a very good PFF.

To JamaGenie: yes, Louis Malle and Candice Bergen were married, from 1980 till his death in 1995.

And about my choice of the featured postcards and stars: it mainly depends on what I am able to show to you. All the cards are vintage cards from my own collection, or these from friends. I buy them on markets and on the net, but postcards of certain stars are hard to find. I was very happy to buy this card of Jeanne Moreau on a Paris flee market a month ago, and till now I never encountered a Catherine Deneuve postcard. But I'm always in for a request and if you want to send me a (scan of a) vintage postcard, please do so.

But I also guess it's more interesting - for everybody - to switch between known and unknown stars, between men and women, stars from different periods and countries. (For PFF I always choose a French star, because I originally thought Marie was French). I hope that the blog will give you a good overview of the European cinema till about 1970, about the stars and how the time affected their lives and careers. Especially the introduction of the sound film and the rise of the Third Reich caused terrible tragedies in so many people's lives. I enjoy to write about those forgotten stars and to show you their beautiful postcards.

I love the look of the first clip...so film noir. And the music....perfect choice for a moody background score.

I enjoy spending time here seeing, hearing and reading about people I never knew about, but who are utterly fascinating after getting to know them through you! Thank you

I just wanted to tell you too that I was looking at educational movies for kids and... tada!!! Jeanne Moreau was smiling up at me. She did a documentary for kids that explores the Louvre! I was so excited to know exactly who she was because of your post! Thanks again! Isn't that wild timing!

Wonderful, what I have seen of her work, I love, but I didn't know how little I knew of her career. More Moreau films to seek out!