Maria Orska (1893-1930) was a Russian-Jewish actress of the German stage and screen in the 1910s and 1920s. She was a darling of the public, but became the talk of Berlin when she became a morphine addict and did several suicide attempts. 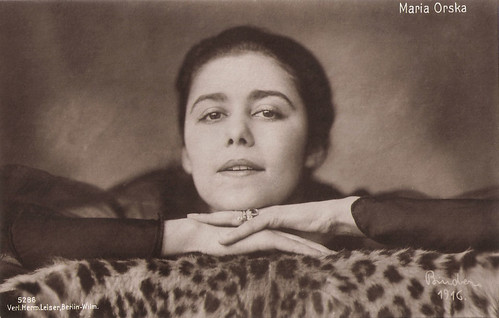 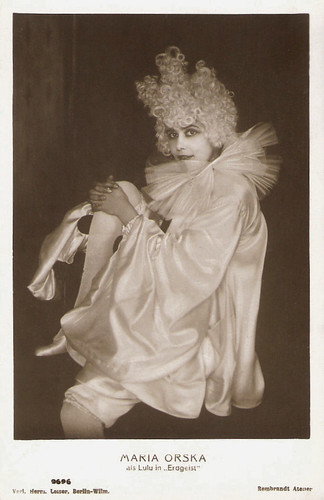 German postcard by Verlag Hermann Leiser, Berlin-Wilm., no. 9696. Photo: Rembrandt Atelier. Maria Orska in her role as Lulu in the stage play Erdgeist (Earth Spirit) by Franz Wedekind, directed in 1916 by Max Reinhardt.

The darling of the audience


Maria Orska was born Effi Rahel Blindermann in Nikolayev, Russian Empire (now Mikolaiv in Ukraine), in 1893. She was the cousin of the German actress Hedda Forsten and by her mother parented to the theatre impresario Eugen Frankfurter.

In 1910, she followed Gregori to the Mannheim court theater where she debuted as Daisy Orska and soon drew attention to herself in plays by August Strindberg and Arthur Schnitzler.

In 1911 she came to the Schauspielhaus in Hamburg, where she became the star of the company. In the season 1914/1915 Maria Orska, her stage name by now, moved to Berlin, where she performed at the Theater in der Königgrätzer Straße (today Hebbel-Theater) as well as Max Reinhardt’s Berlin stage. In the same year Edith Andreae was introduced to her, with whom she held a long lasting friendship.

In Berlin the exiled Russian artist became known as interpreter of the works by modern playwrights such as Oscar Wilde, Strindberg, Schnitzler, Frank Wedekind and Luigi Pirandello. She was a huge success in Wedekind’s Lulu in 1916.

The star was praised as "the unmatched interpreter of Strindberg's women, the most fashionable actress of today's Berlin". She was the representative of an "art entirely dedicated to nerves" (Der Film, no. 23, 01.07.1916). 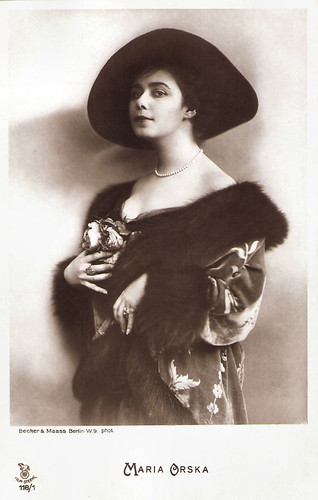 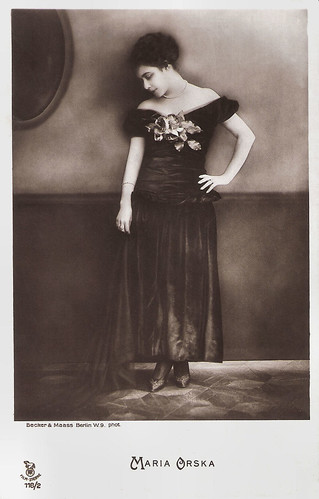 The centre of the so-called Berlin society


The ambitious Maria Orska maintained an elaborate lifestyle since her marriage in 1920 to her second husband, Baron Dr. Hans von Bleichröder jun., a grandson of the Jewish banker Gerson von Bleichröder. For a long time, Baroness von Bleichröder was at the centre of the so-called Berlin society, and also knew how to stage herself in private as an eccentric spectacle.

Her popularity was reinforced by the cinema. In 1915 she had begun a second career as a silent film star and soon she received top salaries. Maria Orska gave her screen debut at the Greenbaum-Film GmbH in Richard Oswald's melodrama Dämon und Mensch/Demon and Man (1915) and played the shady Lina, who wants to take a cleansed criminal (Rudolf Schildkraut) away from the path of virtue.

Her photographs appeared on covers of countless magazines, and postcards with her portraits were distributed all over Europe.

Maria Orska worked for the first time with the filmmaker and director Max Mack at Das tanzende Herz/The Dancing Heart (Max Mack, 1916), which effected in a six-part Maria Orska film series for the cinemas in 1916/1917, with Orska herself as protagonist in each film.

As a girl from the gutter she presented herself in Der Sumpf/The Gutter (Max Mack, 1916), but also in comedies such as Die Sektwette/The Champagne Bet (Max Mack, 1916) she was able to win the audience for herself.

Mack also directed her in Die schwarze Loo/Black Lu (Max Mack, Louis Neher, 1917) as a gypsy woman who becomes the talk of the town, and who almost wrecks the marriage of a musician (Bruno Kastner). Between push dancing and amorous intrigue, the film develops its highly dared action for those days in expressive images and pointed situations, in which with remarkable determination the stern morality of the late German Imperial Empire is shaken.

Die schwarze Loo was the last part of the Maria Orska-series, which Mack realised for Greenbaum-Film. Then Maria Orska took a break from the film business and for the next three years she focused on her stage work. 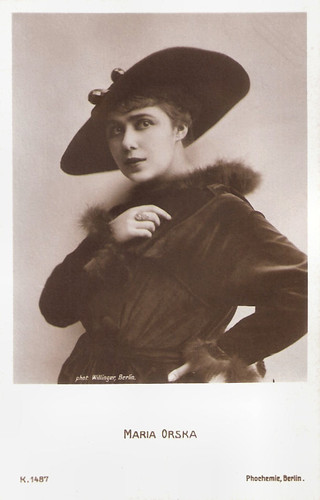 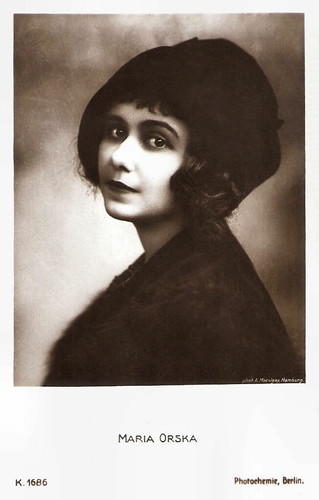 The talk of the town


Maria Orska’s attempt to become a stage actress in Paris failed. Disappointed, the celebrated artist returned to Berlin and accepted commitments at the Komödienhaus, the Deutsches Theater and the Lessing Theater. In 1927 for instance, Orska played the lesbian Ruth in Hans Kaltneker's mystery play The Sisters at the Theater in the Königgrätzer Strasse in Berlin.

More and more however, Orska’s health visibly deteriorated by her morphine addiction. Divorced since 1925 by her husband, Dr. Hans von Bleichröder, Maria Orska became the talk of the town because of her desire for death and her drug consumption. Nurses waited on the side stage with a syringe, directors dreaded every performance. Her suicide attempts - once she jumped off a train - soon became routine for the public. "They saw her already as a typical character, they were each time after a rest and detox pause in the sanatorium, which the demon hunted artist used to leave like a fury, in order to escape from a life that had become worthless for her", Emil Faktor wrote in 1930.

All rehab attempts by Orska proved failures. She finally poisoned herself by an overdose of Veronal. The actress was brought to the Viennese General Hospital, where she died on 16 May 1930, at the age of only 37 – she couldn’t cope with a pneumonia because of her weakened body.

Two years earlier Maria Orska's lover, the wealthy Jewish industrialist and geologist Julius Heinrich Koritschoner from Vienna, had shot himself in Constantinople in 1928. Before his death he had written a letter to Orska. His morphine addiction is thought to have made him suicidal.

The life of Orska's sister Gabryela had also ended tragically. Gabryela, born in 1894, had become Marchesa di Serra Mantschedda when she married an Italian aristocrat. In 1924 (or 1926), Gabryela hanged herself in a Viennese hotel. Wikipedia claims it was after a row with her sister Maria.

Their brother Edwin, an aviator in the Russian Imperial Army, survived the First World War, the Bolshevik revolution, the Nazis, and his sisters. In 1938 he emigrated from Germany to Ecuador where he married in 1938 and died in Quito in 1966.

The famous artist Oskar Kokoschka drew the actress in 1922. Lithographies after his work hang in various museums, e.g. the Staatlichen Kunstsammlungen Dresden.

Finally, Fritz Engel wrote: "Maria Orska was completely subordinate to the intoxication of the stage until it crushed her. Her strange appearance confirmed how difficult it is to understand the phenomenon of the stage actor. She seemed so enveloped in the air of the scene, but at the same time she remained so simple. She was a theatrical crowd-puller and a rhetorical star, such as Wilde’s Salome, and was also the most humble of Hedwig in Wildente (The Wild Duck) by Ibsen. She was hot and cold, she played and she lived". 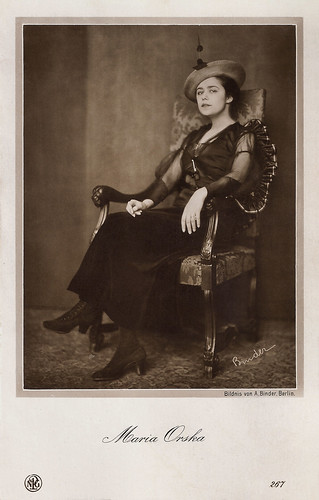 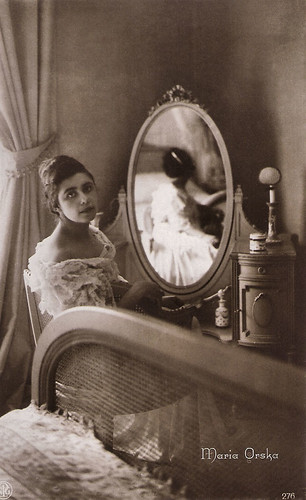 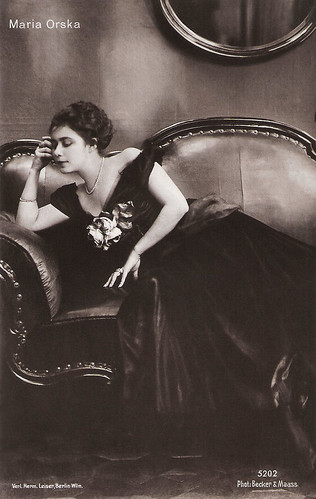