Yesterday, 11 August 2018, the pageview teller of European Film Star Postcards passed the 5,000,000. In the upcoming days, we'll update our five most popular posts of all times to commemorate this milestone. We start with number 5: an I.M. for Aïché Nana, which we posted at EFSP on 31 January 2014, two days after her death. This post had 8581 views, till now.

On 29 January, Lebanese actress and former belly dancer Aïché Nana (1940-2014) died. In 1958, a 'striptease' by the then 18 years old Nana at a Roman party caused an international scandal. Subsequently she became one of the icons of ‘La Dolce Vita’, the liberated era of sex, drugs and rock & roll as documented by Federico Fellini. Aïché Nana appeared in 15 European films between 1956 and 1985. 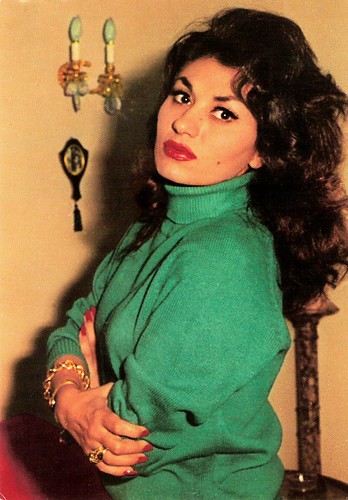 
Aïché Nana was born as Kiash Nanah in Beirut, Lebanon, in 1940.

She became a famous belly-dancer in Istanbul and soon also danced in Paris left-bank cabarets. She reportedly employed high-powered publicity to sell her act to European producers. In 1956 French newspapers reported her mysterious disappearance from a Paris cabaret after writing a single word on a paper in her dressing room: "Farewell”. After the French police was alerted and in the midst of all the publicity, she suddenly returned in good shape.

In 1958, the then 18 year old dancer caused a scandal that alerted the world to the luxurious and decadent lifestyle of the international jet-set in Rome that soon would become known as La Dolce Vita. Thanks to Cinecittà, the film production studios on the east side of the city, Rome had become a popular location for Hollywood films, and the foreign stars and writers began hanging out in the bars of Via Veneto.

On that historical November night, the Swedish actress Anita Ekberg danced barefoot at a party in the Rugantino, a trattoria in Trastevere before Aïché Nana stripped to her knickers. The public was a mix of playboys, film stars like Linda Christian and Elsa Martinelli, and aristocrats, who fled when the police arrived. To the police Aïcha claimed that merrymakers had ripped off her clothes.

The next day the striptease became a historical scandal when gossip columnist Victor Ciuffa published photo’s taken by Tazio Secchiaroli in his column in the newspaper, Corriere d'Informazione. Years later, Ciuffa would claimn to be the subject for the Marcello Mastroianni character in La Dolce Vita/The Sweet Life (Federico Fellini, 1960))

The published photos gave lie to Aïché Nana’s story to the police. Italian authorities threatened her with a three year jail sentence and she quickly returned to Paris where striptease was permitted at the time.

Following her moment of infamy, Nana became something of a celebrity. So, she stepped up to proper, secondary roles in the 1960s. The majority of her parts were in Euro-Westerns where her dark looks made her a natural at playing Mexicans. She appeared with bodybuilder Mickey Hargitay in the Spanish-Italian Western Lo sceriffo che non spara/The Sheriff Won’t Shoot (José Luis Monter, Renato Polselli, 1965).

She also appeared in the thriller A... come assassin/A… Like Assassin (Angelo Dorigo, 1966) starring Alan Steel (aka the Italian actor Sergio Ciani) and was the leading lady of another Italian thriller Due occhi per uccidere/Two Eyes To Kill (Renato Borraccetti, 1968).

In the 1980s followed roles in two big budget productions. In Marco Ferreri’s Storia di Piera/The Story of Piera (1983) she supported a star cast including Isabelle Huppert, Hanna Schygulla and Marcello Mastroianni. Her final film was the British-American Bible epic King David (Bruce Beresford, 1985) starring Richard Gere as the King of Israel who took on Goliath.

Aïché Nana was married to director Sergio Pastore (1932-1987), who had directed her in Crisantemi per un branco di carogne