On 27 June, 86-years old Bud Spencer has died in Rome, Italy of natural causes. The huge Italian actor with his trademark black beard was the popular star of many Spaghetti Westerns and low-budget action films of the late 1960s and 1970s. In 18 films he co-starred with his long time film partner Terence Hill. In his youth, Spencer (then: Carlo Pedersoli) was the first Italian to swim 100 metres in less than a minute. He also had a degree in law, and he registered several patents. 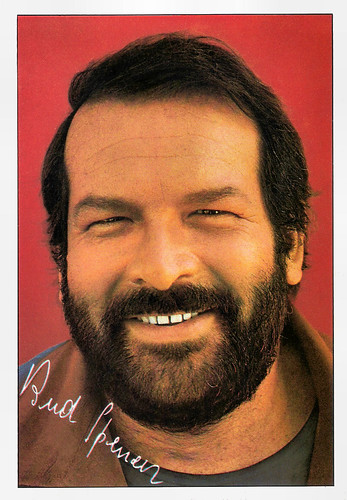 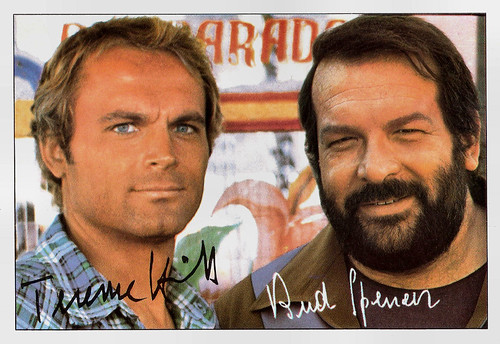 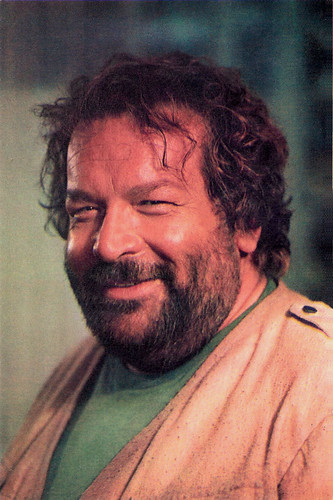 Bitten By the Acting Bug


Bud Spencer was born Carlo Pedersoli in Santa Lucia, a historical part of the city of Naples, in 1929. He was educated as an attorney and he even got a Juris Doctor degree, but Carlo was bitten by the acting bug.

His first film role was as a member of the Praetorian guard in the MGM epic Quo Vadis (Mervyn Leroy, 1951), shot in Italy. During the 1950s, he appeared in minor parts in various films made for the Italian market. Italian director Mario Monicelli gave him his first big role in Un eroe dei nostri tempi/A Hero of Our Times (Mario Monicelli, 1955) with Alberto Sordi.

Pedersoli was also a successful swimmer. In 1950, he was the first Italian to swim the 100 m freestyle in less than one minute (59.5 seconds). In the 1951 Mediterranean Games, he won a silver medal in the same 100 m freestyle event.

Pedersoli appeared in some more Italian films such as the Peplum Annibale/Hannibal (Carlo Ludovico Bragaglia, Edgar G. Ulmer, 1959) starring Victor Mature, but for most of the 1960s his film career would stay minor league. 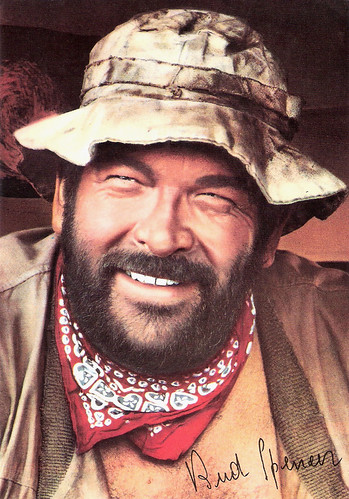 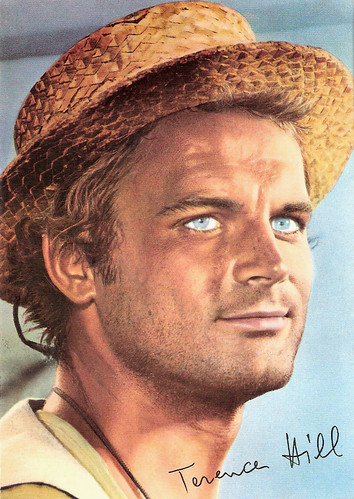 
In 1967 Carlo Pedersoli changed his screen name to Bud Spencer. Reportedly he chose this pseudonym to pay homage to Hollywood star Spencer Tracy as well as to his favourite Czech-American beer, Budweiser. Other sources report that he found it funny to call himself ‘Bud’ despite his weight and his height at 1.94 m, which made him beloved as 'the big friendly giant' of the screen.

With Terence Hill a.k.a. Mario Girotti, he appeared in the Spaghetti Western Dio perdona... Io no!/God Forgives... I Don't! (Giuseppe Colizzi, 1967). Their pairing was a coincidence while a foot injury had forced lead actor Peter Martell (Pietro Martellanza) off the picture. Terence Hill took over the part of the pistolero Cat Stevens, and the rest is history.

Dio perdona... Io no!/God Forgives... I Don't! wasn’t their first film together. Both had also appeared in the Peplum Annibale/Hannibal (1959). After the success of Dio perdona... Io no! followed such Westerns as I quattro dell'Ave Maria/Ace High (Giuseppe Colizzi, 1967) with Eli Wallach, and La collina degli stivali/Boot Hill (Giuseppe Colizzi, 1969) with Woody Strode.

Then they played two brothers in Lo chiamavano Trinità.../They Call Me Trinity (Enzo Barboni a.k.a. E.B. Clucher, 1970), a comedic spoof of the Spaghetti Western genre. They Call Me Trinity became Italy’s top-grossing title.The enormous success lead to the sequel ...continuavano a chiamarlo Trinità/Trinity Is STILL My Name! (Enzo Barboni, 1971) with Harry Carey Jr., which became an even bigger success.

Most of these films have alternate titles, depending upon the country and distributor. Some films have longer Italian versions that were edited for release abroad. Hill and Spencer also appeared together in other action genres, such as in the pirate adventure Il corsaro nero/Blackie the Pirate (Lorenzo Gicca Palli, 1971), the action film ...Altrimenti ci arrabbiamo!/Watch Out, We're Mad (Marcello Fondato, 1974) with Donald Pleasence, and another actioner I due superpiedi quasi piatti/Crime Busters (Enzo Barboni, 1977).

Practically all of Bud Spencer's films have him playing the role of a bearded, balding, and brawny omnipotent who usually ends a fist fight by striking a hammer-like blow on the top of his opponent's head. 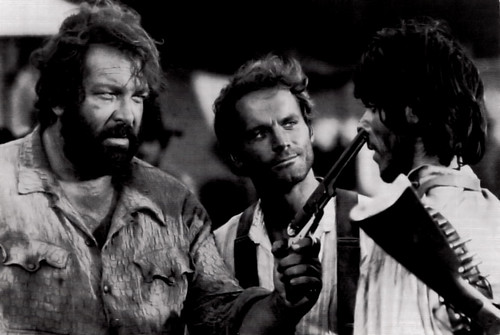 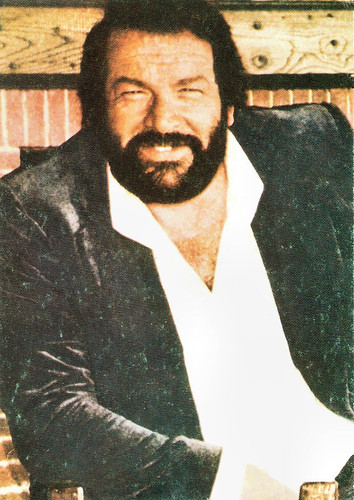 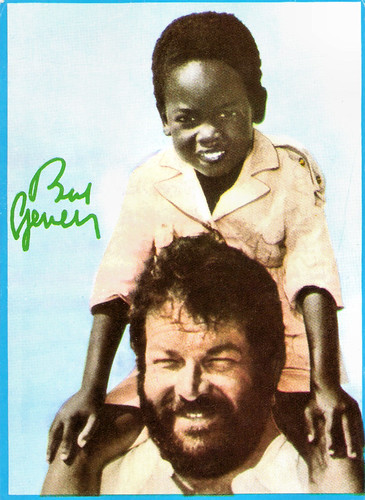 Spenver made a rare entry in the horror genre in 4 mosche di velluto grigio/4 Flies on Grey Velvet (Dario Argento, 1971) with Mimsy Farmer. Then he played a dramatic role as a man innocently kept in prison in Torino nera/Black Turin (Carlo Lizzani, 1972) with Françoise Fabian as his wife.

Later films include the action-packed potboilers Piedone lo sbirro/Piedone, the cop (Steno, 1973), and Lo chiamavano Bulldozer/They Call Him Bulldozer (Michele Lupo, 1978) with Raimund Harmstorf. Spencer also wrote the complete or partial screenplay for some of his films.

His feature film career slowed down after 1983, shifting more toward television. He also became a jet airplane and helicopter pilot in 1972. He established Mistral Air in 1984, an air-mail company that also transported pilgrims. He later sold it to Poste Italiane to buy a textile mill that produced clothes for children. He also has registered several patents.

In the 1990s he acted on TV in the comic action series Extralarge (Enzo G. Castellari, 1990-1993) and Noi siamo angeli/We Are Angels (Ruggero Deodato, 1997), both with Philip Michael Thomas, best known from the 1980s TV hit Miami Vice. His final film with Terence Hill was Botte di Natale/Troublemakers (Terence Hill, 1994).

After he made a film with internationally renowned Italian director Ermanno Olmi, Cantando dietro i paraventi/Singing Behind Screens (2003), Spencer confessed that was perhaps the first time he felt he was an actor. “I always said that I was only a character” as opposed to an actor, he said. The adventure-drama is loosely inspired to real life events of Chinese pirate Ching Shih. The film won three David di Donatello and four Nastro d'Argento Awards.

In 2005, Pedersoli briefly entered politics. Then-Prime Minister Silvio Berlusconi asked him to run as a regional councilor in Lazio for the centre-right Forza Italia party, but he was not elected. That same year he was awarded with the Caimano d'oro (Gold Caiman) by the Italian Swimming Federation. Two years later, he received swim and water polo coach diplomas from the Italian Swimming Federation's president Paolo Barelli.

Bud Spencer continued to appear on TV, and could be seen in the Italian Giallo-comedy television series I delitti del cuoco/Recipe for Crime (Alessandro Capone, 2010) and in an episode of the American comedy series Ninja the Mission Force (2013).

Pedersoli passed away “peacefully” in Rome on 27 June 2016, his son Giuseppe  said in a media statement. Spencer said sports taught him humility. “One day you wake up and someone goes better than you. And you’re not anyone anymore. It’s the same way in cinema.”