The pageview teller of European Film Star Postcards passed the 5,000,000 on 11 August 2018. We commemorate this milestone with updates of our five most popular posts of all times. Today number 2, Marina Vlady, last updated on 7 July 2012. It had 13,785 page views. This summer, Ms. Vlady attended a screening of one her first films, Giorni d'amore/Days of Love (Giuseppe de Santis, 1954), at Cinema Ritrovato in Bologna, where we took a snapshot which we added to this post.

Sensual and alluring French star Marina Vlady (1938) had the makings of just another blonde bombshell, but in 1963 she stunned everybody with her performance in L’Ape Regine/The Conjugal Bed. At the Cannes Film Festival the feline beauty won that year the Golden Palm for Best Actress. 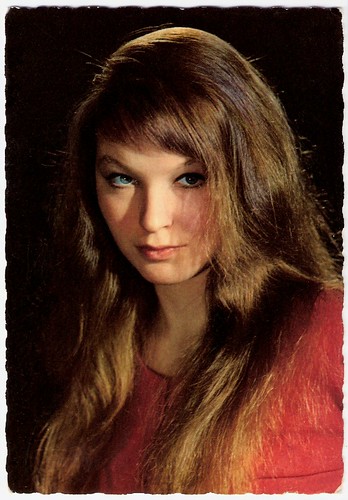 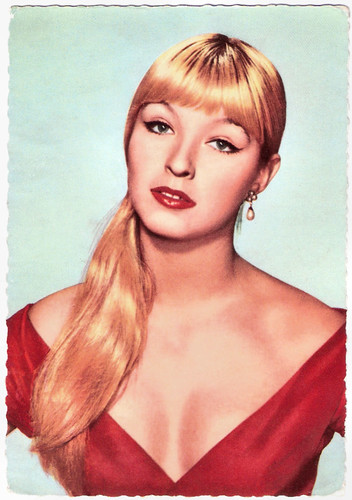 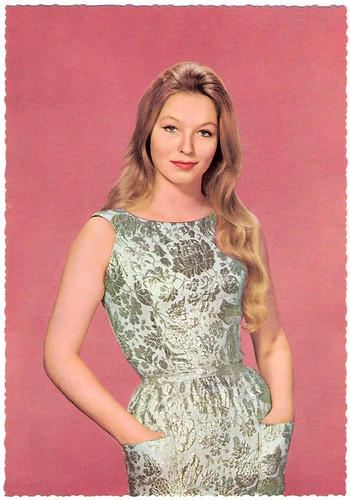 
Marina Vlady was born Marina De Poliakoff-Baidaroff in Clichy, France, as the daughter of a noted, Russian born painter and opera singer Vladimir de Poliakof and star dancer Militza Envald. She is the youngest sister of the actresses Odile Versois, Hélène Vallier, and Olga Baïdar-Poliakoff.

Like her siblings, she began acting as a child and for a while she pursued a ballet career. Marina and Olga both made their minor film debuts in Orage d'été/Summer Storm (Jean Gehret, 1949) which featured their sister Odile.

Marina caught the eye of talent agents. She was a vision of loveliness alongside Marcello Mastroianni in the touching WW II drama Penne nere/Black Feathers (Oreste Biancoli, 1952).

In 1955, at the ripe young age of 17, Vlady met and married actor-writer-director Robert Hossein, who featured her prominently and seductively in a number of his films.

With her sensual and alluring image Marina Vlady gained international renown. The marriage with Hossein lasted only a few years. 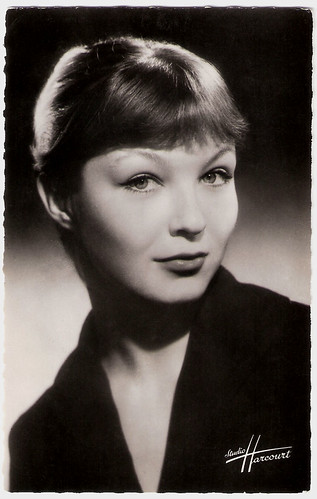 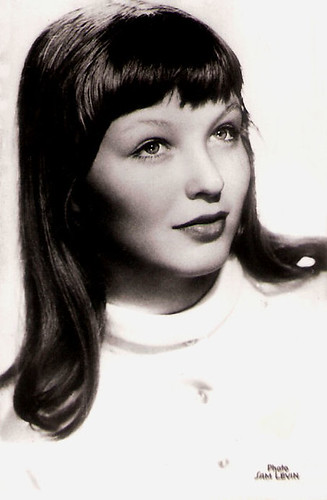 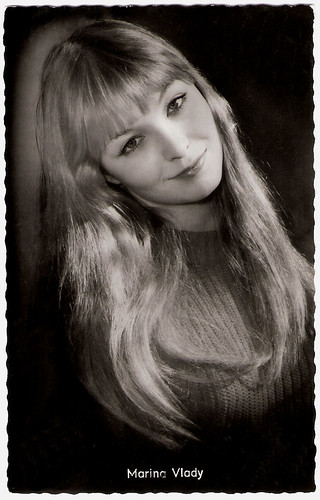 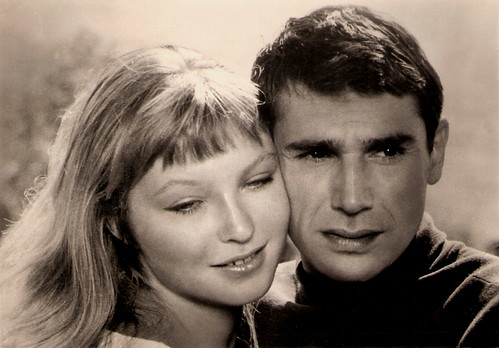 
Marina Vlady could have ended up in the film history annals as merely a second-rate Brigitte Bardot, but the provocative sex kitten proved that she was capable of much more.

In 1961 her role in the costume drama La Princesse de Clèves/Princess of Cleves (Jean Delannoy, 1961) at the side of Jean Marais was reviewed favorably.

In 1963 she gave a stunning performance as the sexually insatiable wife in L’Ape Regine/The Conjugal Bed (Marco Ferreri, 1963) opposite Ugo Tognazzi. She was nominated for a Golden Globe, and won the Best Actress Award at the 1963 Cannes Film Festival.

She also starred in Godard’s essay on Paris, prostitution and cinema, 2 ou 3 choses que je sais d'elle/Two or Three Things I Know About Her (Jean-Luc Godard, 1967). 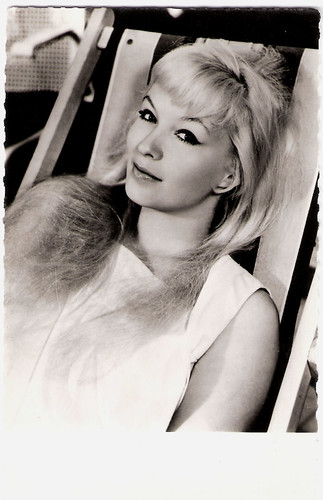 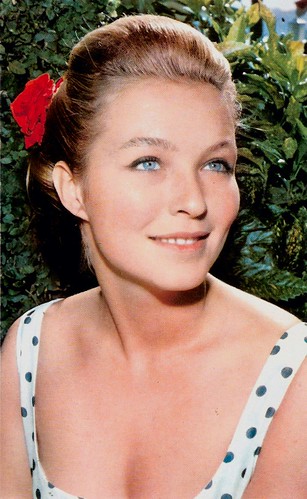 French postcard by Editions P.I., Paris, no. 1093. Photo: Ektachrome Anders. This postcard was offered by Corvisart (a biscuit factory), Epinal. 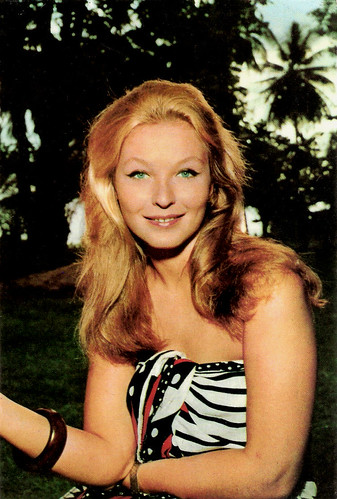 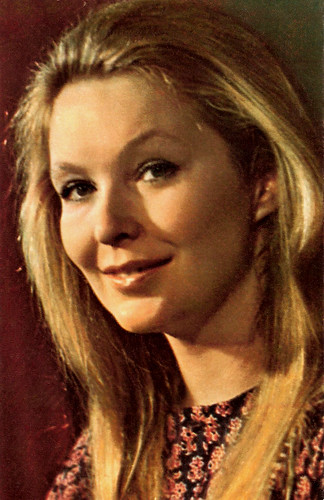 Russian postcard by Izdanije Byuro Propogandy Sovietskogo Kinoiskusstva, no. 3624, 1975. This postcard was printed in an edition of 200.000 cards. Retail price: 5 kop.


Gracing both French and Italian productions throughout most of her career, Marina Vlady was not shy at playing unsympathetic, even caustic characters, and proved adept at both saucy comedy and edgy drama.

One of her rare English roles was Kate Percy in the William Shakespeare adaptation Campanadas a medianoche/Chimes at Midnight (Orson Welles, 1965).

In 1967 she played at the Théâtre Hébertot in Paris with her three sisters, Hélène Vallier, Odile Versois, and Olga Poliakoff, and they had 250 performances.

In 2011 she returned to the screen in the French-Algerian film Quelques jours de répit/A Few Days of Respite (Amor Hakkar, 2011). It competed in the World Cinema section at the 2011 Sundance Film Festival. Recently, she could be seen in the short film, L'air d'un oubli/Maxence & Clara (Olivier Fely-Biolet, 2016) and gave her voice to another short, La lettre à Noémie/The Letter to Noémie (Micheline Abergel, Natasha Mashkevich, 2017).

Marina Vlady was married four times. She has two sons with Robert Hossein, Igor and Pierre Her second husband was Jean-Claude Brouillet.

In 1969 (or 1970 - the sources differ about the date) she married Russian poet, song-writer and actor Vladimir Vysotsky, who died in 1980 of a drug overdose aggravated by chronic alcoholism. About their love affair she wrote the memoir Vladimir, or the Aborted Flight. Her fourth husband, doctor Léon Schwartzenberg, passed away in 2003. 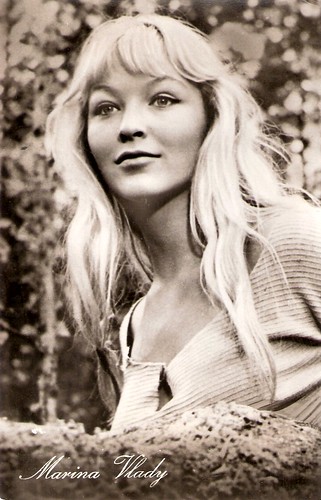 East-German card by VEB Progress Film-Vertrieb, Berlin. Photo: Les Films Metzger & Woog und Productions Iena, no. 1/457. Still from La Sorcière/The Blonde Witch (André Michel, 1956). In this film Marina Vlady plays Ina, a Swedish nature-girl, who meets Brulard, a French civil engineer on assignment in Sweden for a lumber company. They fall in love, and have an affair. He tries to convert her to 'civilization', but ends up getting her killed by superstitious villagers instead. 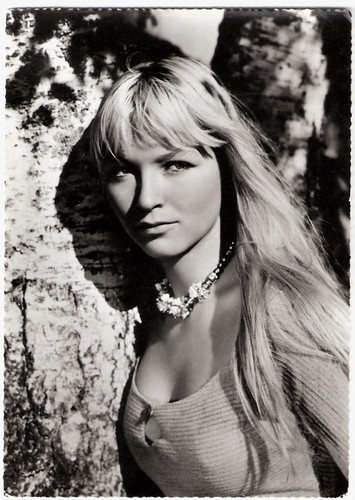 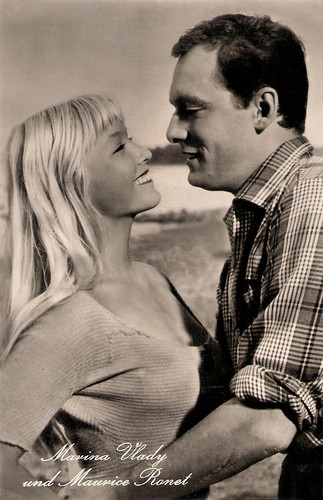 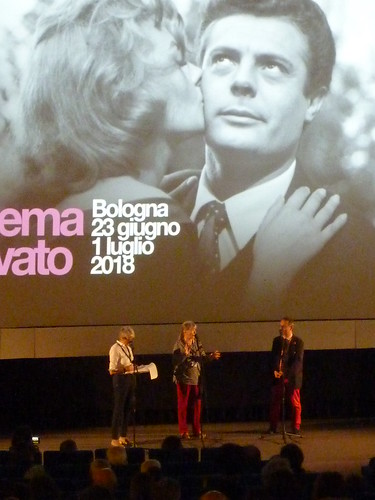 Marina Vlady was one of the guests at Cinema Ritrovato 2018. Here, she is interviewed by festival director Gian Luca Farinelli before the screening of Giorni d'amore/Days of Love (Giuseppe de Santis, 1954) at the Cinema Arlecchino. She was funny and very alert and looked amazing.

She is a vision of lovliness! I love her cat like arched eyebrows! Getting a cup of coffee so that I can watch the video:)

She's very beautiful. With that bone structure I wasn't surprised to read she was the daughter of a Russian.

She is beautiful. I have to admit, I think she's most beautiful with darker hair.