Porcelain pretty Yoko Tani (1928–1999) was a French-born Japanese actress and a sensual nightclub entertainer too. She appeared in many French films, but also played starring roles in Japanese, British, American, Canadian and even East-German productions. 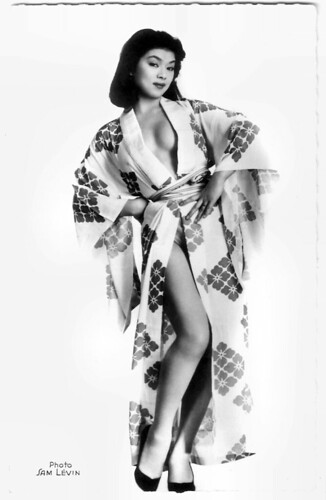 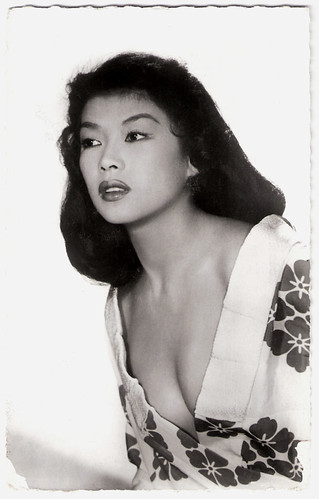 Yoko Tani was born as Itani Yōko (猪谷洋子) in Paris, France in 1928. She was the daughter of the Japanese ambassador in France and she had a younger sister, Aiko.

She has occasionally been described as 'Eurasian', 'half-French', 'half-Japanese', and even 'Italian-Japanese'. Wikipedia claims that all these descriptions are incorrect: "According to contemporary French sources, her father and mother were attached to the Japanese embassy in Paris, and Tani herself was conceived en route during a shipboard passage from Japan to Europe in 1927, hence given the name Yōko, one reading of which can mean ‘ocean-child.’

Japanese sources indicate that the family returned to Japan in 1930, when Yoko still was a toddler, and she did not return to France until 1950, when her schooling was completed". The Wikipedia author doubts this while there were severe restrictions on Japanese travelling outside Japan directly after WW II. However, the Japanese sources state that Itani had attended an elite Catholic girls' school in Tokyo, and through it secured a Catholic scholarship to study at the University of Paris.

Installing herself in Montmartre, she developed an immediate attraction to cabarets, nightclubs, and music-halls. Setting herself up as an exotic oriental beauty she quickly established a reputation for her provocatively sexy ‘geisha’ dances, which generally ended with her slipping out of her kimono.

It was here she was spotted by famous director Marcel Carné, who took her into his circle of artistic friends, including French actor Roland Lesaffre, whom she would marry in 1956.

As a result, she began to get bit parts in films - starting as a Japanese dancer, in Le port du désir/House on the Waterfront (Edmond T. Gréville, 1954) starring Jean Gabin - and on the stage, with a role as the blue lotus in la Petite Maison de Thé (a French adaptation of The Teahouse of the August Moon) at the Théâtre Montparnasse. 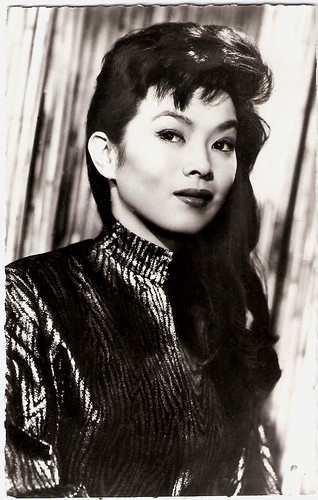 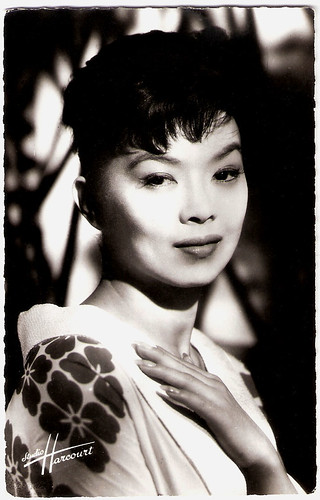 Yoko Tani's involvement with cinema was, up to the mid 1950s, limited entirely to that of portraying stereotyped Orientals in French films.

With the end of the US occupation of Japan in 1952, however, postwar Japanese cinema itself burst upon the French scene, culminating in the years 1955 and 1956 when a total of six Japanese films, including Ikimono no Kiroku/I Live in Fear (Akira Kurosawa, 1955), were entered at the Cannes film festival.

At Cannes, Tani made contact with directors Akira Kurosawa and Hisamatsu Seiji, which led to a trip to Japan in 1956 by Tani and Lesaffre, and their joint appearance in the Toho production Fukuaki no seishun/Barefoot Youth (Taniguchi Senkichi, 1956). It was originally intended that the film would be directed by Kurosawa himself, but in the end it fell to his Toho colleague Taniguchi Senkichi. Tani and Lesaffre's ambition was to bring the film back to France and release it in the French market, an aim which was never achieved.

During the same trip, and also for Toho, Tani took a small role in Jōshû to tomo ni/Women in Prison (Hisamatsu Seiji, 1956), in which she played a westernised Japanese Catholic named Mary. This film, now virtually unobtainable, starred the legendary Japanese stars Hara Setsuko and Tanaka Kinuyo.

She had her breakthrough in English-language cinema came with the war-time love story The Wind Cannot Read (Ralph Thomas, 1959). Gary Brumburgh at IMDb notes about her performance: “The cameras displayed a lovely, quiet beauty in the 1950's and she was absolutely beguiling”. The film had originally been a project of the British producer Alexander Korda, and was to have been directed by David Lean, who in 1955 travelled to Japan with author Richard Mason and cast Japanese actress Kishi Keiko as the female lead. At a very advanced stage, the project fell apart, and a few months later Korda died.

The pieces were eventually picked up by the Rank Organisation, and it was decided to produce the film using the script and locations already set out by Lean, with one of Rank's big stars, Dirk Bogarde, in the male lead as a British POW in a Japanese camp. Tani played his ill wife.

The film was a modest commercial success, and lead to further roles in British co-productions - as the Inuit Asiak in the Anglo-French-Italian The Savage Innocents (Nicholas Ray, 1959) with Anthony Quinn, and as the ingenue Seraphina in the crime drama Piccadilly Third Stop (Wolf Rilla, 1960). 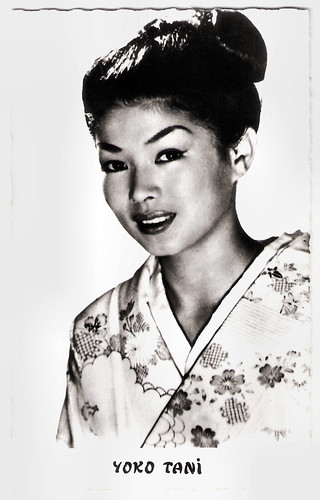 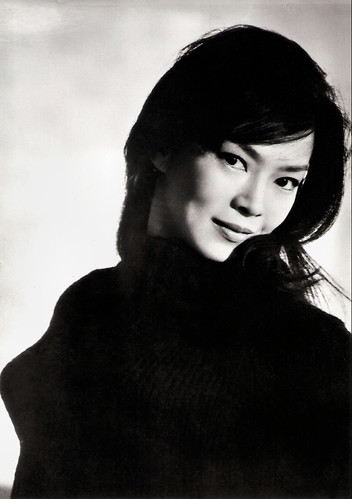 Aside from The Quiet American, Yoko Tani’s only other Hollywood roles were in the comedy My Geisha (Jack Cardiff, 1962) starring Shirley MacLaine and Yves Montand - shot, however, on location in Japan - and the lively sex-comedy Who's Been Sleeping in My Bed? (Daniel Mann, 1963) with Dean Martin as a womanising soap-opera star.

Perhaps even more unusual (for the time) was her trip to the Vancouver Islands in Canada to play the role of Mary Ota in The Sweet and the Bitter (James Clavell, 1962-1967), which treated the aftermath of the wartime internment of Canadian Japanese and the loss of their properties and their businesses.

In 1962, she returned to France. Her marriage to Lesaffre, who maintained an ongoing, homosexual liaison with Marcel Carné, was childless. It ended in divorce in 1962.

From this point on, she was to be more strictly Europe-based and to take on work mainly as a femme fatale in Eurospy films as OSS 77 – Operazione fior di loto/OSS77 – Operation Lotus (Bruno Paolinelli, 1967) with Dominique Boschero, and in the final two episodes of the popular British TV series Danger Man/Secret Agent, featuring Patrick McGoohan. These episodes – filmed in colour - were combined into one feature-length film, Koroshi (Michael Truman, Peter Yates, 1967) that was released theatrically in several countries.

Despite her involvement with film, Tani never abandoned her attachment to nightclub and cabaret. She worked as a stripper in the well-known Le Crazy Horse de Paris and other girlie clubs. Even as late as 1977, she had a small role in the Brazilian sexploitation thriller O Estripador de Mulheres/The Women Ripper (Juan Bajon, 1977). That year she also starred in a transvestite show in downtown São Paulo.

In later life Tani remarried, wedding Roger Laforet, a native of the seaside village of Binic in Brittany. A wealthy industrialist, Laforet was an associate of Baron Marcel Bich, co-founder of the BIC consumer products empire. Tani's declining years were spent between Paris and their house in Paimpol overlooking the sea. Gary Brumburgh adds at IMDb: “In later years she enjoyed painting and was devoted to her religion and her dog that she named ‘Toto’.”

Yoko Tani died of cancer in 1999 in Paris, after a long illness. She is buried in Binic, together with Laforet. Their tomb carries the Breton inscription «Ganeoc'h Bepred» (roughly, "Always With You"). Her late husband, Ronald Lesaffre, is buried together with Marcel Carné in his grave in the Cimetière Saint-Vincent in Montmartre. 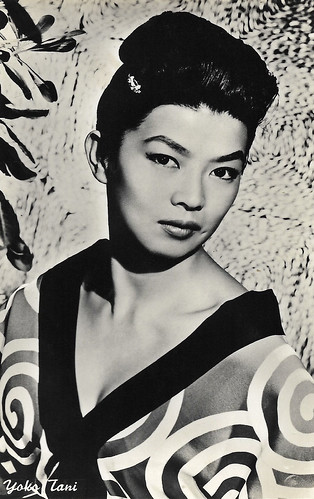 Italian postcard by Bromofoto, Milano, no. 1391. Sadly the edges above and at right of the card were cut off by a former owner.