Saint-Granier (1890-1976) was a French journalist, singer, (song)writer, actor, director, and radio star. Between the two wars he was one of the great personalities of the French cabaret. He was also the director of Paramount Pictures in France in the early 1930s. 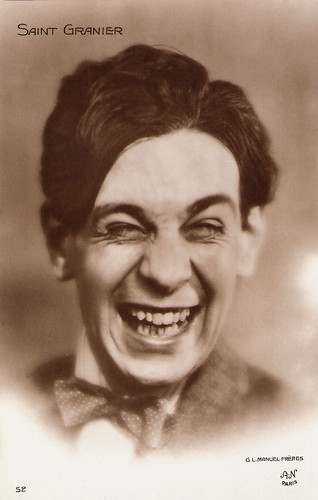 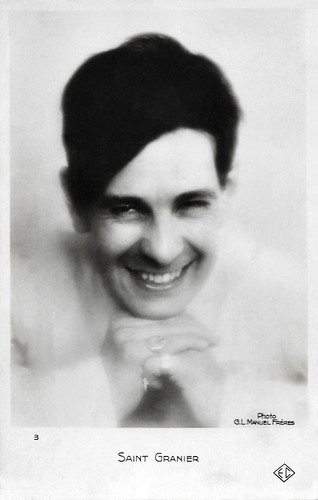 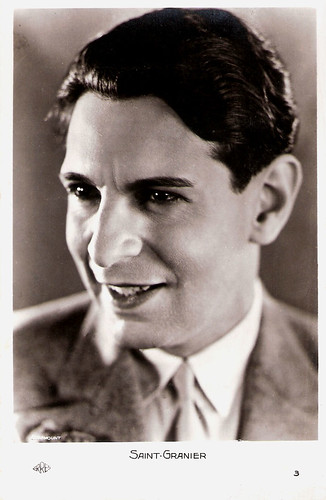 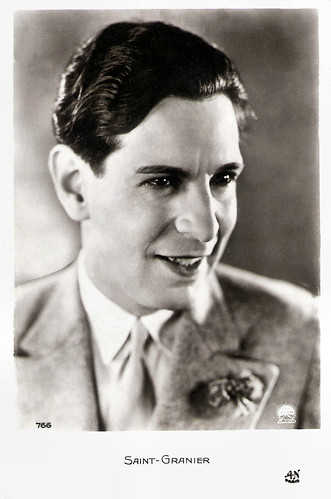 Hush you, it's crazy

Saint-Granier was born as Jean de Granier de Cassagnac in Paris in 1890. Among his aristocratic family were many journalists and MP’s.

He studied at the Lycee Condorcet in Paris, where he met Jean Cocteau and Alexandre Stavisky. He had to break up his studies in 1907, when his mother died. With the help of his family, he became a stockbroker from 1908 till 1912.

During this period he regularly attended the cabarets of Montmartre, where he heard Yvette Guilbert, Harry Fragson (his favourite) and Damia (who called herself Carmen at the time).

It stimulated him to become a satirist for such magazines as Le Charivari, l'Indiscret and Bravo, but he also wrote for such prominent newspapers as Le Matin and Le journal. He wrote newspaper columns about Parisian artistic life, and till the end of his life he considered himself a journalist.

In 1913 he embarked on the stage of the cabaret Le Porc Épic (the Porcupine) to sing his own texts. His status as a journalist led him to choose topics related to current events. In 1914 he wrote his first revue in collaboration with Yves Meralli, Tais toi, c'est fou ! (Hush you, it's crazy), which was presented at the venue Le Little Palace.

Some of his songs became hits such as Billet doux (Love notes), C'est jeune et ça n'sait pas (It is young and does not know it) popularised by Maurice Chevalier, Yo t'aime yo t'adore (Yo love you yo adore), Marquita and finally Ramona. They were echoed by several famous performers till today and he would be associated with them throughout his life and against his will.

Parallel to these activities, he continued to sing and perform in cabarets such as Le Grillon (the Cricket), Le Moulin de la chanson (the Mill of the song), Le Caveau de la République (the Cave of the Republic), and then sang exclusively at La Pie qui chante (the singing Magpie).

He also performed in his own revue on which collaborated Willemetz Albert, Rip or Jacques Charles. His success earned him the derisive nickname ‘demi-mondain’ because of his origins and his upscale dating. Because of his seductive smile he was also called ‘singe Granier’ (monkey Granier). 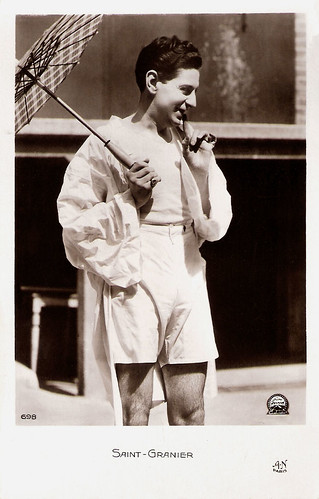 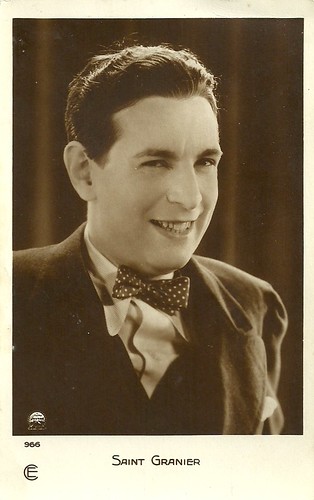 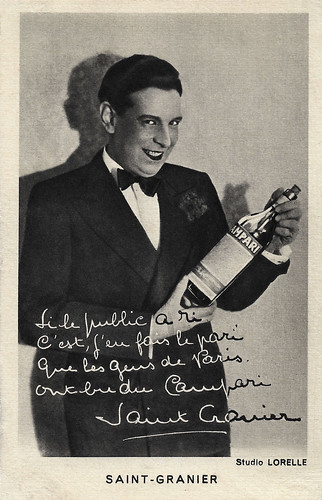 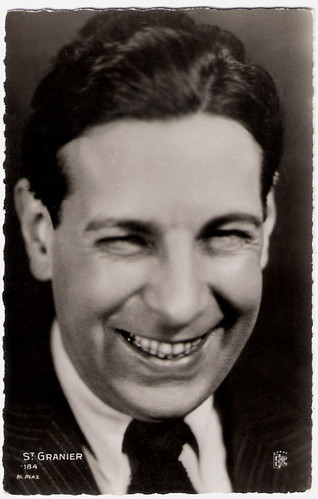 In 1921, Saint-Grenier made his film debut in Villa Destin/Villa Fate (Marcel L'Herbier, 1921), an Oscar Wilde adaptation in which he co-starred with Alice Field.

Then he sang Ramona in the French version of the Hollywood sound production Ramona (Edwin Carewe, 1928) starring Dolores del Rio. He also worked on Champagner/Champagne (Géza von Bolváry, 1929), the German version of Alfred Hitchcock’s Champagne (1930) with Betty Balfour starring in both versions.

Then Saint-Granier extended his activities for the cinema and became the director of Paramount Pictures for France from 1930 to 1932. During this period he also appeared in Paramount en parade/Paramount on Parade (Charles de Rochefort, 1930) with Maurice Chevalier, Chérie (Mona Goya, Louis Mercanton, 1930), and Maquillage/Make-up (Karl Anton, 1932) with Edwige Feuillère.

Then he went to the radio where he had made his debut in 1930. Seven years later he became the producer at Radio Cité, the most famous French radio station in the 1930s. There he produced with Jacques Canetti the first radio column, La minute du bon sens (The minute makes sense) later renamed by the public as La minute de Saint-Granier (The minute of Saint-Granier).

Incidentally he could be seen in the cinema, such as in the comedies Tartarin de Tarascon/Tartarin of Tarascon (Raymond Bernard, 1934) with Raimu, and Un coup de rouge/A glass of red wine (Gaston Roudès, 1937).

After the war he continued with his radio columns and made On chante dans mon quartier (The Songs of My Neighbourhood) (1945) with the legendary opening song by Francis Blanche, Ploum ploum Tralala.

He also continued to appear in films, such as in the musicals Destins/Fates (Richard Pottier, 1946) with Tino Rossi, Boîte de nuit/Hotbed of Sin (Alfred Rode, 1951) with Junie Astor, and as a presenter in the comedy Bébés à gogo/Babes a GoGo (Paul Mesnier, 1956) with Jane Sourza.

In the 1950s, he made the television show La joie de vivre (The joy of living). The success of the show lead to more jokes against him and he was nicknamed ‘the Marquis’ or ‘Saint-Ploum ploum’. In this period he decided to take a step back, and to continue only the radio column to keep in touch with the public.

Saint-Granier passed away in 1976 in Neuilly-sur-Seine, France, at the age of 88. He was the father of actor Jean Grenier. 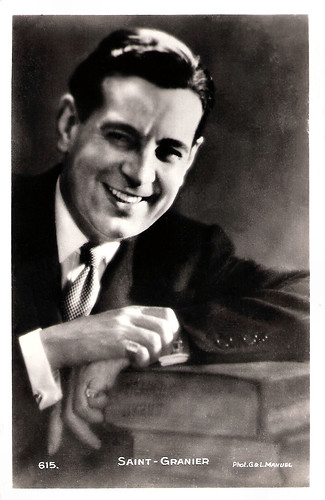 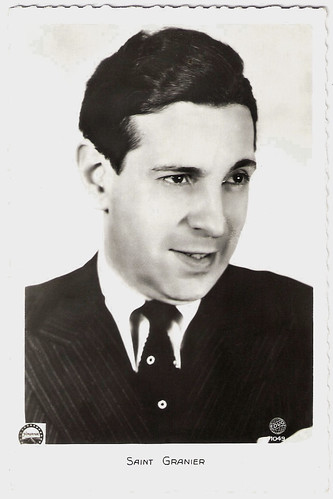 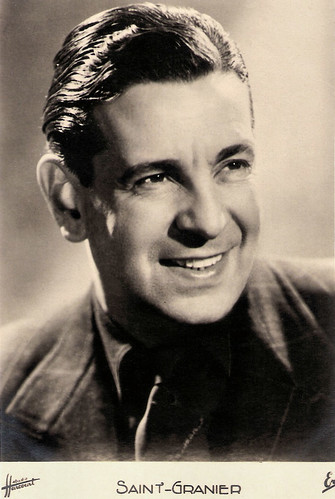 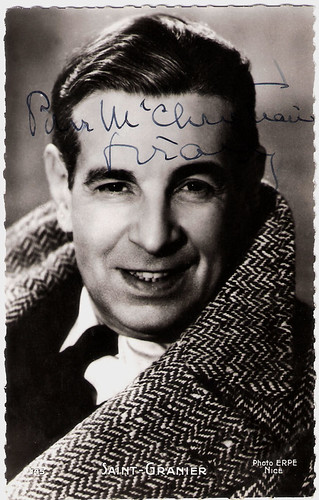