Ermete Zacconi (1857-1948) was a monstre sacré of the Italian theatre. He also acted in various Italian silent and sound films. 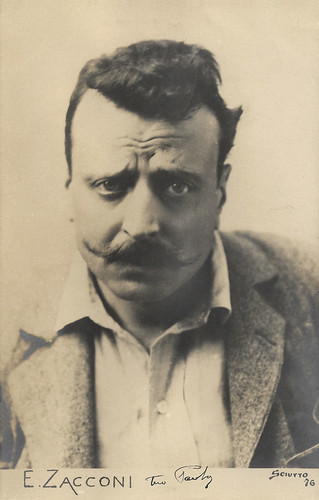 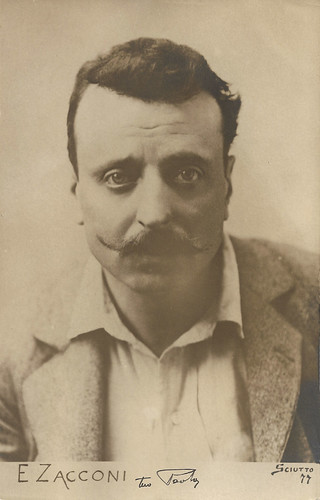 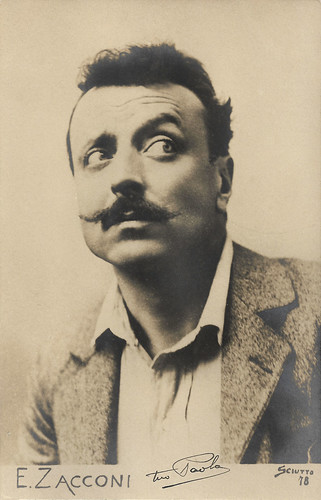 
Ermete Zacconi was born in Montecchio, Italy in 1857. He made his stage debut as a child, performing with his parents.

Over a period beginning in the 1880s, he held a leading position in troupes directed by G. Emmanuel, G. B. Marini, and V. Marini.

Zacconi developed as an actor during the period when naturalism was established in the Western European theatre. He became one of its most important representants. Following Emile Zola’s naturalism, this also included that he studied psychopathology, theories on the effects of heredity, and related subjects.

He did this in order to understand the psychology of man, in particular the clinical symptoms of an unhealthy psyche, which he reproduced with perfection. Zacconi’s most famous role was that of Oswald in Henrik Ibsen’s Spettri/Ghosts, reaching the maximum of realism with a shocking performance of the symptoms of the growing paralysis of the protagonist.

In Il cardinale Lambertini by Alfredo Testoni he did his most famous interpretation, showing a witty humour. His repertory also included the roles of Nikita in Lev Tolstoy’s The Power of Darkness, Kusovkin in Ivan Turgenev’s The Boarder, and Corrado in Paolo Giacometti’s La morte civile/Civil Death.

After engagements with other companies, Zacconi organised his own troupe in 1894. He was worldwide appreciated, thanks to tours to France, Egypt, South-America and Russia.

At Eleonora Duse’s invitation, he performed with her troupe in 1899, 1901, and 1921. Zacconi’s leading actresses were his wife Ines Cristina Zacconi and Paola Pezzaglia. 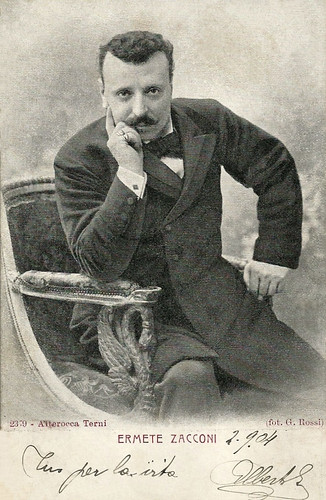 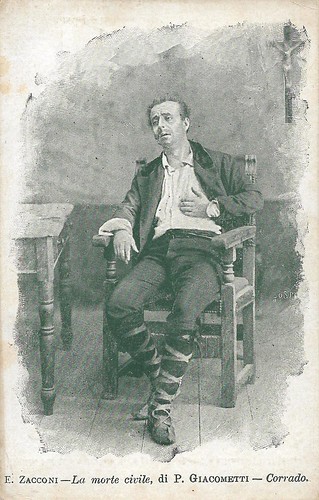 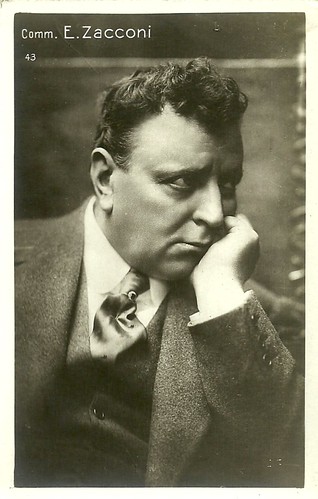 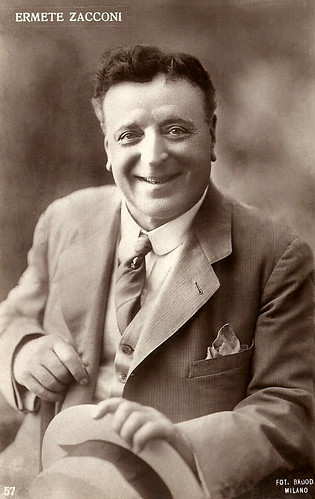 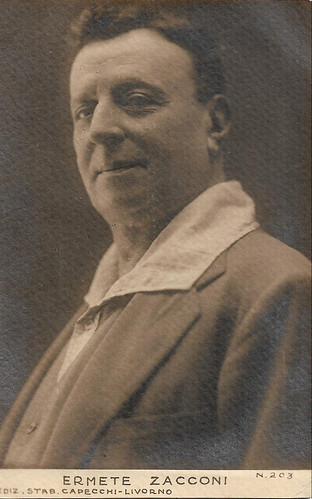 
In 1912, Ermete Zacconi was won for the cinema. He made his film debut debuting with the spectacular melodrama Padre/Father (Dante Testa, Gino Zaccaria, 1912), based on a play by August Strindberg.

Padre narrates the story of an unjustly imprisoned businessman (Zacconi), who escapes and plots revenge on the culprit, his competitor. But he discovers the other has raised the convict’s daughter as his own, while the other man’s son is in love with the girl. The poor protagonist lets go, he even saves the culprit when a terrible blaze menaces to kill him. The other repents while dying, and indicates the girl her real father.

Padre was a success, inspiring other films with Zacconi such as Lo scomparso/The Dread of Doom (Dante Testa, 1913) and L'emigrante/The Emigrant (Febo Mari, 1915), the latter on the emigration of Italians to the United States. 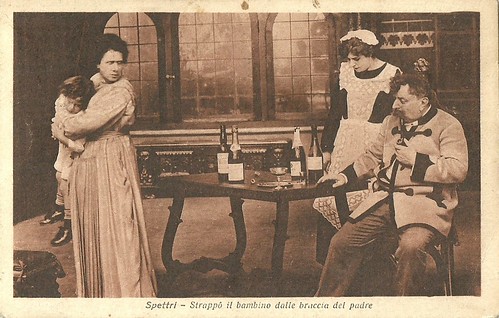 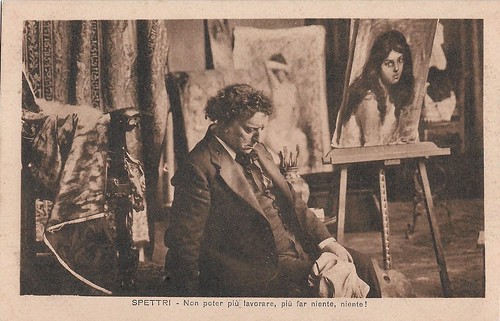 Italian postcard. Ermete Zacconi in the Italian silent film Spettri/Gli spettri (A.G. Caldiera, 1918), adapted from Henrik Ibsen's Ghosts (Gengangere, 1881). Caption: Not being able anymore to paint, to do anything, nothing! 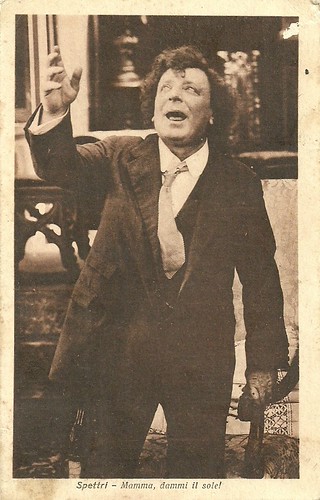 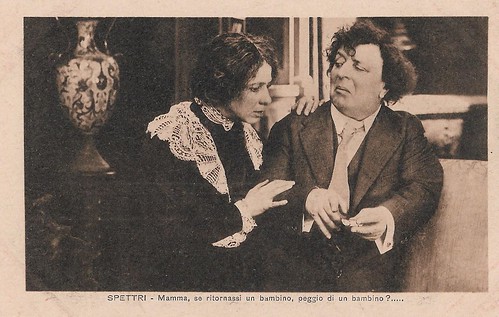 Italian postcard. Ermete Zacconi and Ines Cristina-Zacconi in Spettri/Gli spettri (A.G. Caldiera, 1918). Caption: Mama, what if I would become a child again, or even worse as a child? 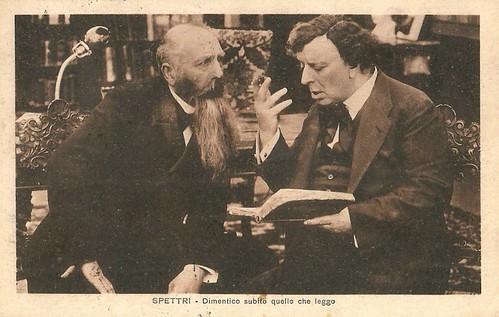 Italian postcard. Ermete Zacconi in Spettri/Gli spettri (A.G. Caldiera, 1918). Caption: I immediately forget what I have read. On the right Ermete Zacconi as Oswald/Osvaldo Halving. The man on the left could be Pastor Manders (Giovanni Grassi).

Sources: The free dictionary.com, Wikipedia (Italian and English), and IMDb.