English film actor Walter Byron (1899-1972) appeared in 66 films between 1926 and 1942. Most notably he starred opposite Gloria Swanson in the legendary 'lost' film Queen Kelly (Erich von Stroheim, 1929). Though handsome, he was rather uncharismatic and never quite made the grade as a star. 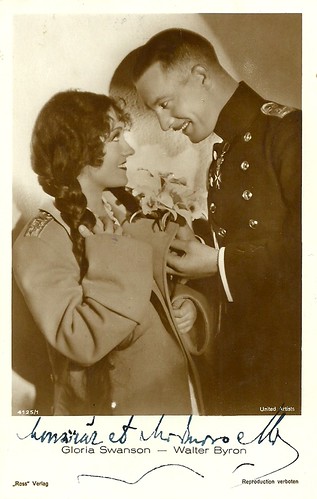 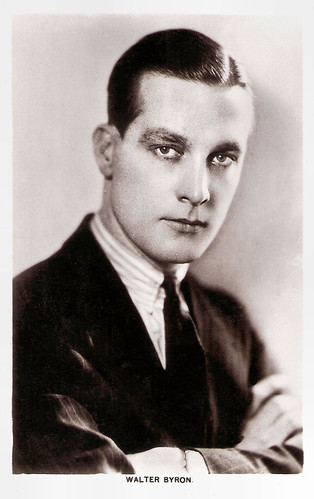 British postcard in the Picturegoer series, London, no. 331. 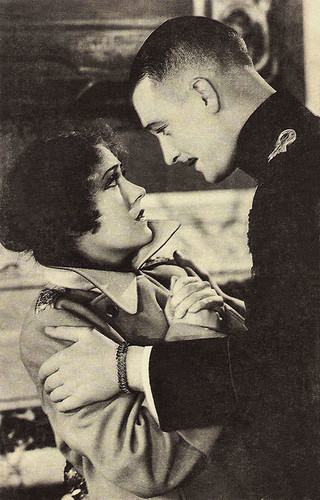 
Walter Byron was born Walter Clarence Butler in 1899 in Leicester, England. He made his film debut as Walter Butler in the lead role of the English short film Dream Faces (Hugh Croise, 1926). In France, he made the comedy Croquette (Louis Mercanton, 1928) opposite Betty Balfour.

Walter's brother, Jack Byron, appeared in Hollywood films from the early 1920s on and Walter joined him in 1928. The handsome young actor got a contract with Samuel Goldwyn. He soon got leading roles in silent films such as the romantic drama The Awakening (Victor Fleming, 1928) opposite Vilma Bánky, now credited as Walter Byron.

His Hollywood career seemed to go uphill when he was cast opposite Mega-star Gloria Swanson in the costume drama Queen Kelly (Erich von Stroheim, 1929). He played Prince Wolfram, the betrothed of mad Queen Regina V of Kronberg (Seena Owen). As punishment for partying with other women, he is sent on manoeuvres. He sees Kitty Kelly (Swanson) walking with other convent students and flirts with her. She is embarrassed when he makes a comment after seeing that her underwear is visible, so she takes it off and throws it at him, to the horror of the nuns, who punish her for her 'indecency'.

Enthralled by her beauty, he kidnaps her that night from the convent, takes her to his room and professes his love for her. When the Queen finds them together the next morning, she whips Kelly and throws her out of the castle. Regina then puts Wolfram in prison for not wanting to marry her.

Swanson complained about the direction the film was taking. Though the already filmed European scenes were full of innuendo, and featured a philandering prince and a sex-crazed queen, the coming scenes set in Africa were grim and, Swanson felt, distasteful. Original plot was that Kelly goes to German East Africa to visit her dying aunt and is forced to marry a repulsive man named Jan.

The aunt dies after the wedding and Kelly refuses to live with him, instead becoming the madam of her aunt's brothel. Her extravagances and style earn her the name 'Queen Kelly'. In later interviews, Swanson claimed that she had been misled by the script which referred to her character arriving in, and taking over, a dance hall. When she was looking at the rushes, it was obvious the 'dance hall' was actually a brothel. 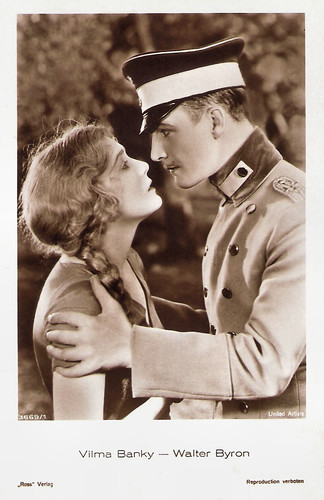 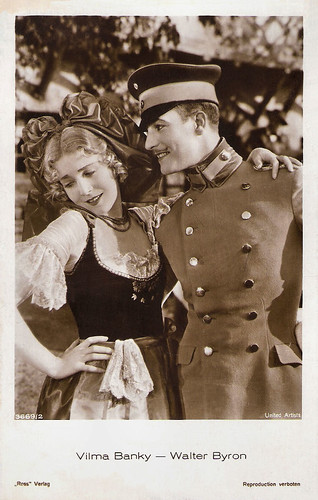 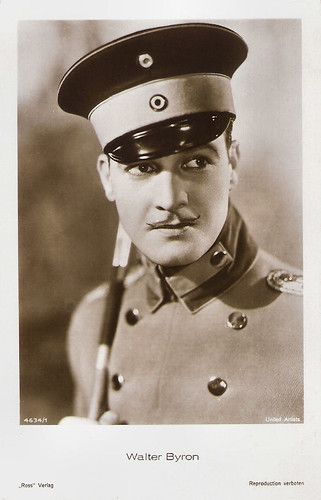 
On 9 December 1929, synchronised sound retakes were shot for Queen Kelly. Franz Lehár was hired, at one stage in the rewrite stage, to compose music for the film, but that work was never completed or used. On 24 November 1931, a rewritten ending in which the prince discovers that the desperate Kelly has successfully committed suicide by drowning was after her humiliation at the hands of the Queen was shot by cinematographer Gregg Toland.

This version was released in 1932 in runs that were limited to Europe and South America due to a clause in Erich von Stroheim’s contract. In 1933, von Stroheim submitted a script called Poto Poto to MGM. Though it was never produced, the script contained several elements recycled from the African story of Queen Kelly.

A short extract of Queen Kelly appears in Sunset Boulevard (Billy Wilder, 1950), representing an old silent picture Swanson's character Norma Desmond - herself a silent movie star - had made. Von Stroheim is also a primary character in Sunset Boulevard, as her ex-director, ex-husband, and current butler. By some accounts, Von Stroheim suggested the clip be used for its heavy irony.

This was the first time viewers in the US got to see any footage of the infamous collaboration. A restoration of the film was produced by Dennis Doros of Kino International in 1985. Kino International restored two versions: one that uses still photos and subtitles in an attempt to wrap up the storyline, and the other the European 'suicide ending' version.

On IMDb, reviewer jrd-73 writes about the restoration: "The Swanson cut is a good movie, with a weak ending. However, it does work as a movie, if a somewhat stunted one. There is a beginning (lovers meet), a middle (lovers spend an enchanted night together), and a quick ending. Along the way, the film conjures some wonderful scenes: Queen Regina with her cat descending upon Prince Wolfram and his dog, Kelly meeting the Prince and losing a piece of clothing, Kelly in the church sanctuary bathed in candlelight, and the climatic meeting between Kelly and the Queen.

By contrast, the restoration is problematic because it fails to go anywhere. There is a beginning, the start of a middle, and then a bunch of scenes, great masterful scenes, but scenes that do not pay off. Then the film ends with an epilogue explaining what the viewer might have seen had the film finished shooting and had then been edited and released the way von Stroheim intended (not a guarantee considering what happened with Greed which was all filmed).

I can appreciate Kino's dilemma. The found, unused scenes from the film feature some of the most astounding visuals and drama of any American silent film. The brothel setting oozes ornamental decadence. Film fans owe a lot to whomever preserved these scenes. Yet, I don't think the restoration works as a self-contained film. The found footage plays like a fascinating twenty minute trailer for a grand epic that no one will ever get to see. By taking out Swanson's ending and putting in this footage, the restorers end with an unfinished film and a frustrating viewing experience."

Walter Byron's career went downhill after Queen Kelly. He was the leading man in lesser Hollywood productions, and could only find supporting or minor roles in A-pictures like Vanity Fair (Chester M. Franklin, 1932) with Myrna Loy, and If You Could Only Cook (1935) with Herbert Marshall and Jean Arthur.

At the end of the 1930s, his parts were often so small he did not get a credit. His final film appearance was as a Ringside Telegrapher in Gentleman Jim (Raoul Walsh, 1942) starring Errol Flynn. In 1972, Walter Byron passed away in Signal Hill, California, USA. He was 72. 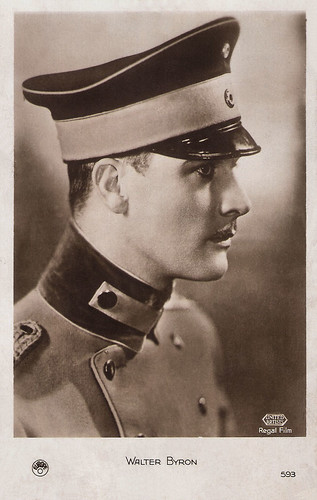 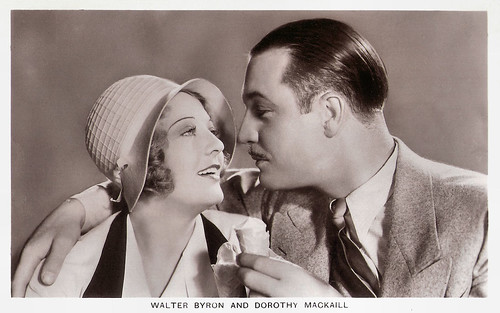 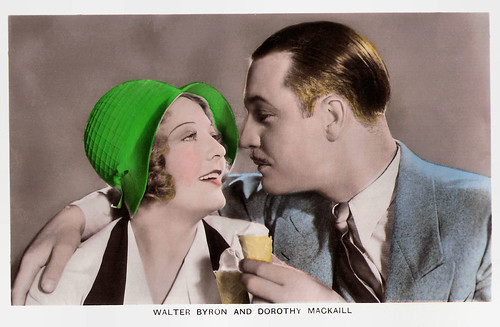 Thank you! We enjoyed this one very much.