Today, 1 October 2018, Armenian-French singer, songwriter, actor, public activist and diplomat Charles Aznavour has passed away. Besides being one of France's most popular and enduring singers, he was also one of the most well-known singers in the world. The ‘Frank Sinatra of France’ was known for his characteristic short figure and unique tenor voice. He has appeared in more than 60 films, composed about 1,000 songs, and sold well over 100 million records. Aznavour was 94. 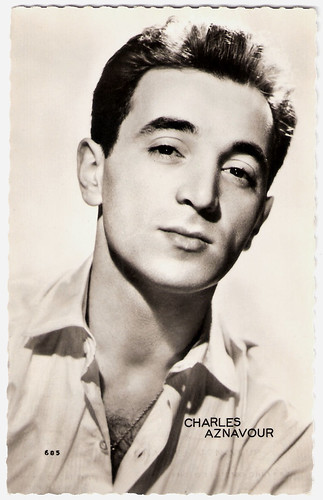 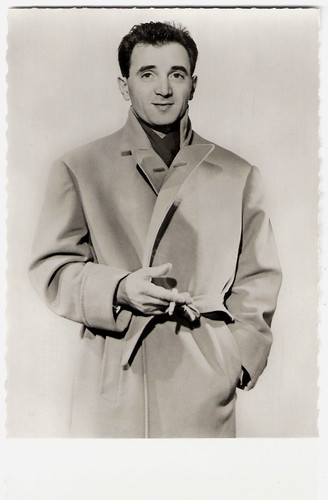 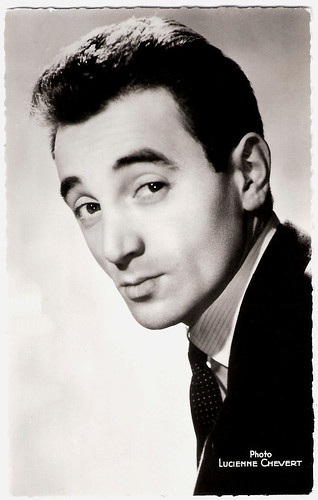 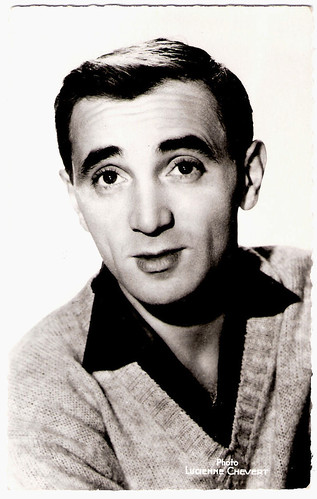 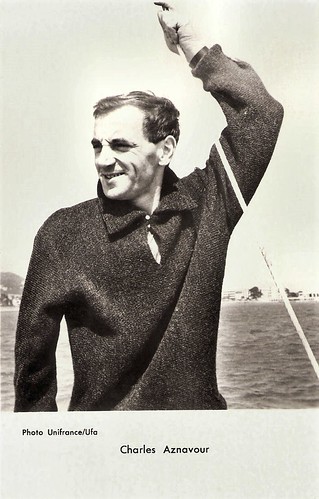 
Charles Aznavour was born Shahnour Vaghenag Aznavourian in Paris in 1924. He was the son of Armenian immigrants Michael Aznavourian and Knar Bagdasarian who fled to France following the Turkish massacre.

His mother was a seamstress as well as an actress and his father was a baritone who sang in restaurants. They introduced him to the world of theatre at an early age. He dropped out of school at the age of nine, already aspiring to the life of an artist.

Ar age 9, he took his first theatrical bow in the play Emil and the Detectives by Erich Kästner and within a few years he was working as a film extra. He made his film debut in La Guerre des gosses/Generals Without Buttons (Jacques Daroy, 1936). He toured France and Belgium as a boy singer/dancer with a travelling theatrical troupe while living the bohemian lifestyle.

A popular performer at the Paris' Club de la Chanson, it was there that he was introduced in 1941 to the songwriter Pierre Roche. His big break came when the singer Édith Piaf heard him sing and arranged to take him with her on tour in France and to the United States. For Piaf he wrote the French version of the American hit Jezebel.

In 1950, he gave the bittersweet song Je Hais Les Dimanches (I Hate Sundays) to chanteuse Juliette Gréco, which became a huge hit for her.

He made several successful tours while scoring breakaway hits with the somber chanson songs Sur ma vie (About My Life) and Parce que (Because) and the notable and controversial Après l'amour (After the Love). Often described as the ‘Frank Sinatra of France’, his unique tenor voice is clear and ringing in its upper reaches, with gravely and profound low notes.

In 1974 Aznavour became a major success internationally when his song She went to number one in the charts of several countries. His other internationally well-known song was Dance in the Old Fashioned Way. Elvis Costello recorded She for the hit comedy Notting Hill (Roger Michell, 1999) with Hugh Grant and Julia Roberts. 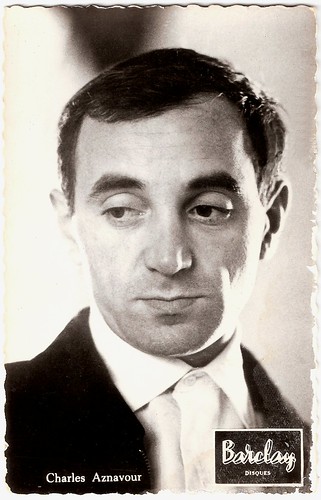 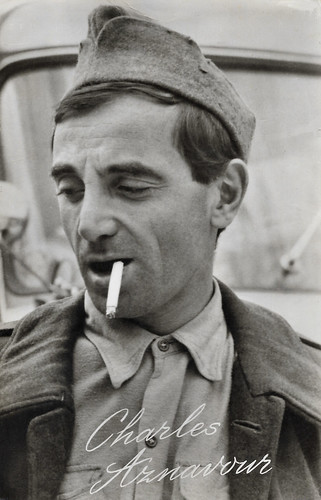 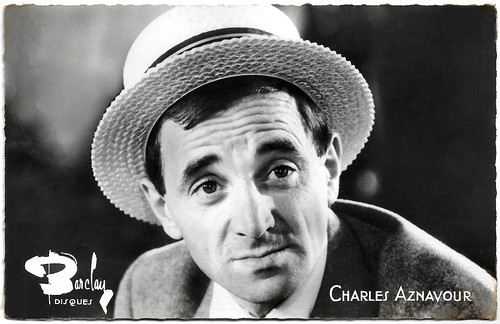 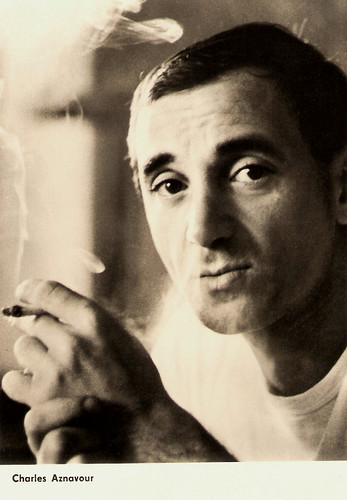 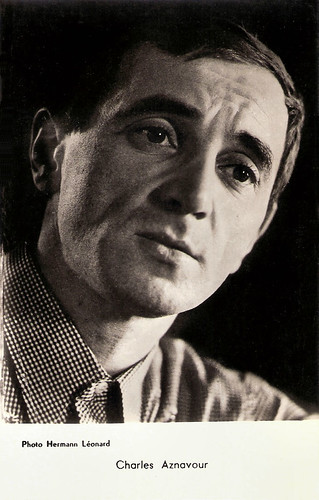 
Charles Aznavour has had a long and varied parallel career as an actor, appearing in over 60 films. In the post-WW II years he began appearing in films again. One of them as a singing croupier in Adieu chérie/Goodbye Darling (Raymond Bernard, 1946) starring Danielle Darrieux.

In the late 1950s, Aznavour began to infiltrate films with more relish. Short (he stood only 160 cm) and stubby in stature and excessively brash and brooding in nature, he was hardly leading man material but embraced his shortcomings nevertheless. Unwilling to let these faults deter him, he made a strong impression with the comedy Une gosse sensass' (Robert Bibal, 1957) and with Paris Music Hall (Stany Cordier, 1957).

He was deeply affecting as the benevolent but despondent and ill-fated mental patient Heurtevent in La tête contre les murs/Head Against the Wall (Georges Franju, 1959).

Aznavour acted in films outside of France with more dubious results. While the sexy satire Candy (Christian Marquand, 1968), with an international cast that included Marlon Brando, and the Harold Robbins adaptation The Adventurers (Lewis Gilbert, 1970) were considered huge misfires upon release, it still showed Aznavour off as a world-wide attraction.

He also put in a critically acclaimed performance in Ein unbekannter rechnet ab/And Then There Were None (Peter Collinson, 1974), an umpteenth film version of Agatha Christie's Ten Little Indians. Aznavour had an important supporting role in Die Blechtrommel/The Tin Drum (Volker Schlöndorff, 1978), winner of the Academy Award for Best Foreign Language Film in 1979. 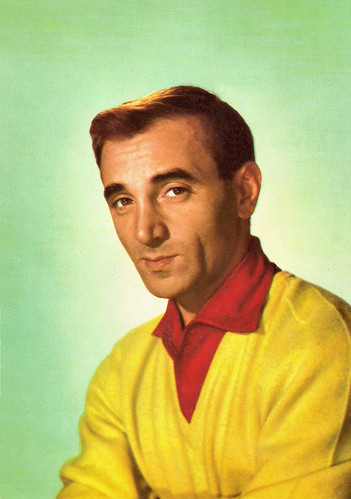 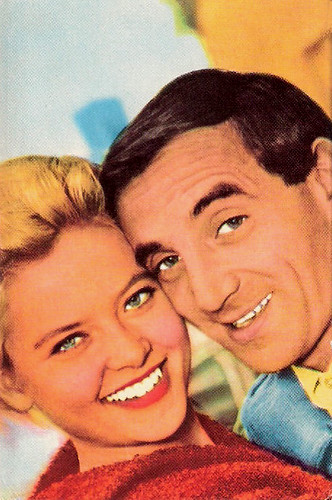 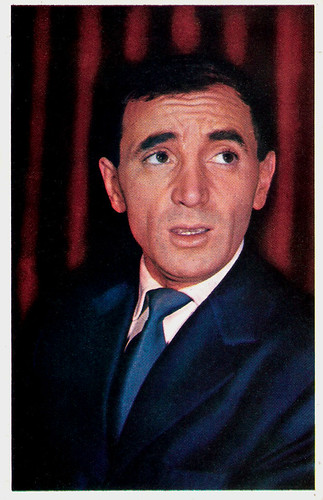 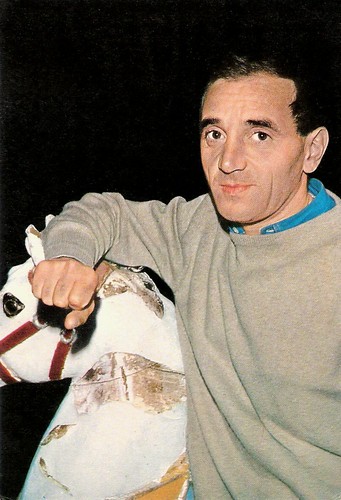 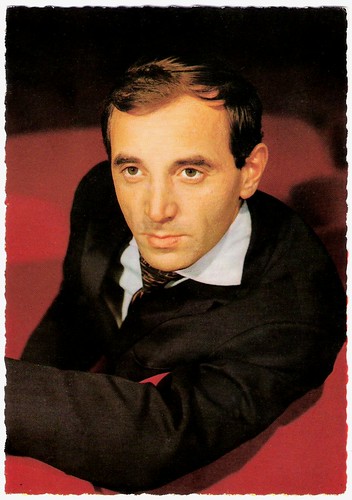 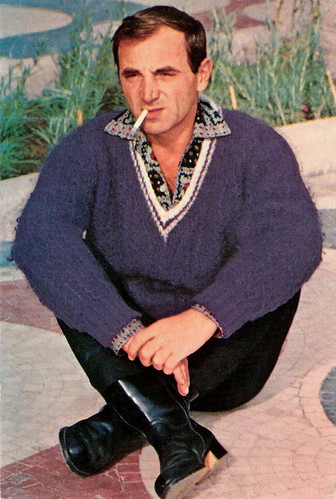 
His music kept Charles Aznavour in the international limelight. He received thirty-seven gold albums in all. His most popular song in America, Yesterday When I Was Young has had renditions covered by everyone from Shirley Bassey to Julio Iglesias.

Since the 1988 earthquake in Armenia, he has been helping the country through his charity, Aznavour for Armenia. Together with his brother in-law and co-author Georges Garvarentz he wrote the song Pour toi Arménie, which was performed by a group of famous French artists and topped the charts for 18 weeks.

He also played a role in the Canadian-French production Ararat (Atom Egoyan, 2002), a contemporary story of the making of a historical epic about the Armenian genocide between 1915 and 1918. In 2004, Aznavour received the title of ‘National Hero’ of Armenia for his humanitarian work, Armenia's highest award.

In 2006, Aznavour initiated his farewell tour, performing in the US and Canada, and earning very positive reviews. He started 2007 with concerts all over Japan and Asia. The second half of 2007 saw Aznavour return to Paris for over 20 shows at the Palais des Congrès in Paris, followed by more touring in Belgium, the Netherlands, and the rest of France.

He continued his film career and starred in Mon colonel/The Colonel (Laurent Herbiet, 2006), a murder-mystery and a metaphor for the Algerian War of Independence (1954-1962), and more recently he could be heard as the French voice of Carl Fredricksen in the Pixar animation film Up (Pete Docter, Bob Peterson, 2009).

In December 2011 he gave a concert in Moscow State Kremlin Palace that attracted a capacity crowd. The concert was followed by a standing ovation which continued for about 15 minutes. On 19 September 2018, his last concert took place in NHK Hall, Osaka.

On 1 October 2018 Charles Aznavour died at his home in the village of Mouriès in the south of France. Charles Aznavour was married three times, to Micheline Rugel, Evelyn Plessis and his widow Ulla Thorsell. Six children were produced by these marriages: Séda, Charles, Patrick, Katia, Mischa, and Nicolas. 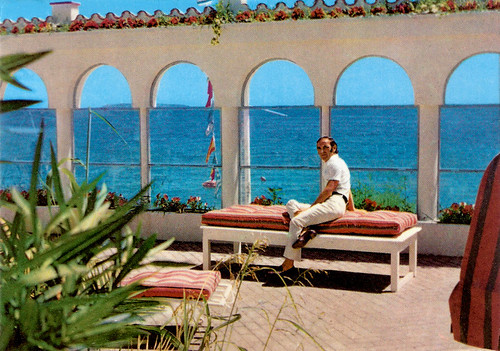 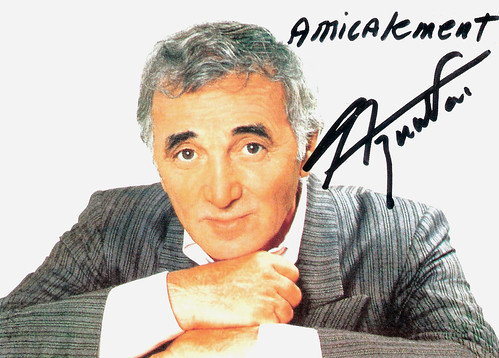 
Trailer for Ein unbekannter rechnet ab/And Then There Were None (1974). Source: John Wayne Freak (YouTube).

Ah yes, I remember that song, "She," from the film "Notting Hill." Happy PFF!

...and he's still touring today! he was in rome just last month!

Thanks so much for this! I have to admit, I didn't know anything about him until I read your post. I immediately looked on iTunes to listen to some of his music, before i realized that you had included the youtube clip. Wonderful! I particularly liked il faut savoir.

What a familiar face, although I'm not sure I've seen any of the movies he was in. Thanks for an incredibly interesting and wonderful (from a new follower and PFF participant - PFFP?)

Wow! Thanks for all the info. Happy PFF.

What a wonderful face. What a beautiful voice. Thank you for bringing these long-gone performers to mind...I feel quite rich for having read your blog.

For some reason I have a lasting memory of Charles Aznavour on early morning television being asked to sing his latest, and he refused!

Thank you for your comments. Till next PFF!