This week, EFSP follows Le Giornate del Cinema Muto, the 37th edition of the world’s leading international silent-film festival in Pordenone. One of the programmes is John Collins at Edison. Screened today will be The Slavey Student (1915) with American film actress Viola Dana (1897-1987). She was Collins's wife and the lead actress of many of his films. After his death by the 1918 flu pandemic, Dana became very successful in Hollywood. 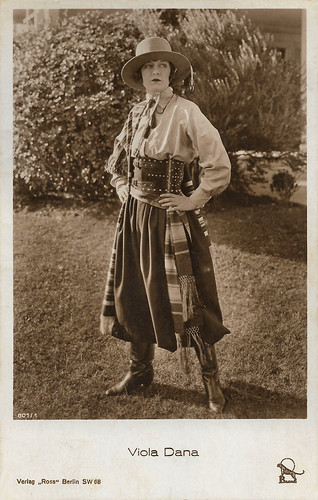 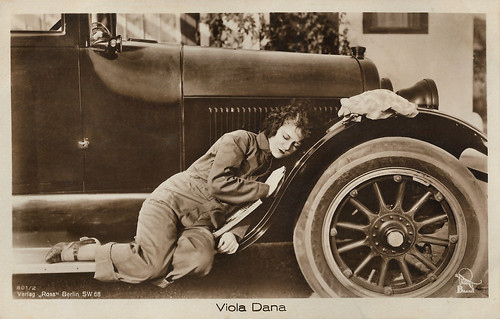 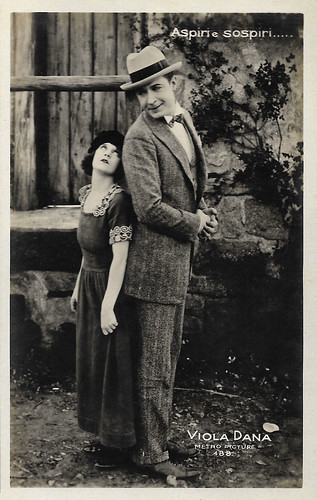 Viola Dana born Virginia Flugrath in 1897 in Brooklyn, New York, USA. She was the middle sister of three sisters: the other two were actresses Edna Flugrath and Shirley Mason. The girls' mother had dreams of her daughters being actresses and enthusiastically sought stage work for them.

Viola appeared on the stage at the age of three. Much of her and her sisters' young lives was spent performing with touring companies, at Coney Island, Elks Clubs or anywhere else employment could be found. She read William Shakespeare and particularly identified with the teenage Juliet.

Dana entered films in 1910. Since the Flugraths lived near the Edison studios, it was only natural that their mother would seek out jobs for them there. For the Edison Manufacturing company, she appeared in A Christmas Carol (J. Searle Dawley, Charles Kent, Ashley Miller, 1910), based on the Charles Dickens story and with Marc McDermott as Ebenezer Scrooge.

Between 1910 and 1912, she made three more small appearances in the emergent film industry in New York, using her own name Viola Flugrath. She began also performing in vaudeville with Dustin Farnum in The Little Rebel and played a bit part in The Model by Augustus Thomas.

In 1913, she won the title part in the David Belasco stage production of The Poor Little Rich Girl and the hit show enjoyed a long run at the Hudson Theatre in Manhattan. Her breakthrough movie was Molly the Drummer Boy (George Lessey, 1914). She became a star with the Edison Company, working at their studio in the Bronx, a former riding academy on West 61st Street.

There, she fell in love with Edison director John Hancock Collins and they married in 1915. Collins had come to Edison in 1904 and performed all sorts of tasks, including handyman, until he was finally promoted to director. After marrying Viola, he became her director and wrote many of her films.

William K. Everson writes in his study American Silent Film (1978) that Collins's films were some of the best to come out of the Edison studio: "Despite extremely perceptive and laudatory reviews for his films of 1914-1918, he is an ignored and unknown figure to most American historians". He goes on to note that Collins' lack of recognition is due in part to the perception that no directorial talent ever came out of the Edison studios. "Collins' films show that not only were we wrong about him but that it is quite possible that other directors of his calibre lie buried with the unseen Edison films."

The success of the films by John H. Collins with Viola Dana encouraged producer B. A. Rolfe to offer the couple lucrative contracts with his company, Rolfe Photoplays, which released through Metro Pictures Corporation. Dana and Collins accepted Rolfe's offer in 1916.

Dana left before Collins, who was finishing work at the studio; however, Collins contracted influenza which rapidly turned into pneumonia and died in a New York hotel room. 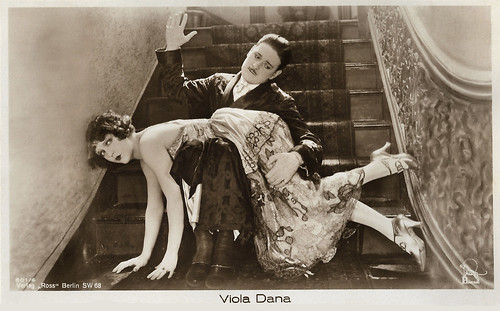 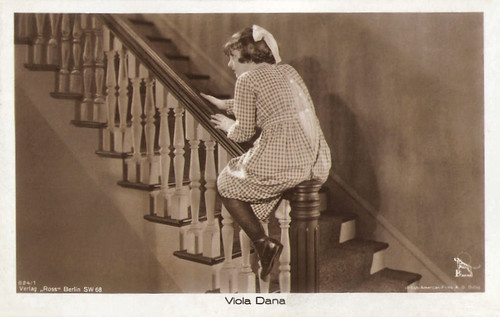 Viola Dana had a romantic relationship (1919-1920) with daredevil Hollywood pilot Ormer Locklear, who was married at the time. His skills as an aviator made him perfect movie material, and, in 1920, he was making The Skywayman for Fox.

The filming called for night flying scenes over oil fields in the Los Angeles area. Locklear was to take his plane into a tailspin heading dangerously toward the ground. Sunlight arcs were directed at the plane so it would show up against the night sky. The blinding lights were to be shut off just as Locklear reached the level of the oil wells indicating that he should straighten out the plane. However, whoever was in charge never took the lights off him, and he crashed.

Viola was present a the time of the incident and would not fly again for 25 years. In 1925 she married Yale football star and actor Maurice 'Lefty' Flynn, but they divorced in 1929.

For Metro, Dana continued to turn in great performances in light comedies, particularly as Katie O'Doone in Bred in Old Kentucky (Edward Dillon, 1926). She became one the best paid stars of Metro, which of course became part of Metro-Goldwyn-Mayer. In 1926, she moved from MGM to Paramount. Throughout the 1920s she continued to act, but her popularity gradually waned when sound film was introduced.

One of her last important roles was in Frank Capra's first film for Columbia Pictures, That Certain Thing (1928) with Ralph Graves. According to Wikipedia, she was unable to make the transition to sound films. According to the Chicago Tribune, her voice was not suited for sound pictures.

By the time she made her final film appearance in 1933, she had played in over 100 films. In 1930 she had married actor and professional golfer Jimmy Thompson. After a brief stint in vaudeville she retired to tour with her husband, Jimmy Thomson.

In 1945, the marriage with Thomson dissolved in a divorce.Dana briefly came out of retirement to appear on television in small part on the TV series  Lux Video Theatre (1956) and My Three Sons (1963). Dana became a volunteer aide at the Motion Picture Country House before moving there permanently in 1979.

More than 50 years after her retirement from the screen, Viola Dana appeared in the documentary TV series Hollywood (Kevin Brownlow, David Gill, 1980), discussing her career as a silent film star during the 1920s. Footage from the interview was used in a later documentary series on Buster Keaton, Buster Keaton: A Hard Act to Follow (1987), also by Kevin Brownlow and David Gill.

At the age of 90, Viola Dana passed away in 1987 at the Motion Picture & Television Country House and Hospital in Woodland Hills, Los Angeles. In 1990, she was the subject of a documentary short by Anthony Slide, Vi: Portrait of a Silent Star, in which she talks of her life and career. 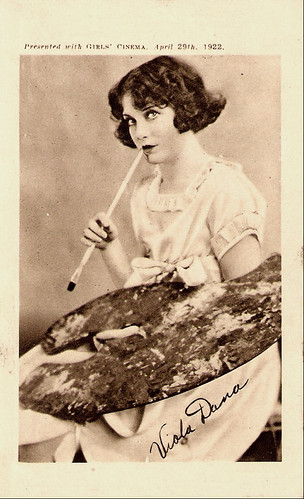 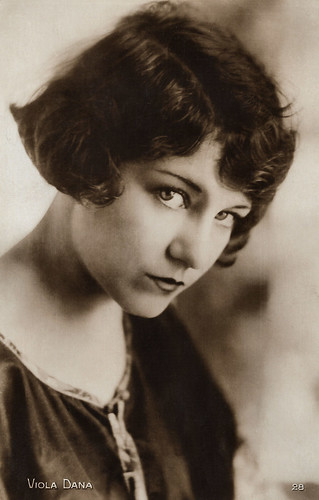 French postcard by Cinémagazine-Edition, Paris, no. 28. 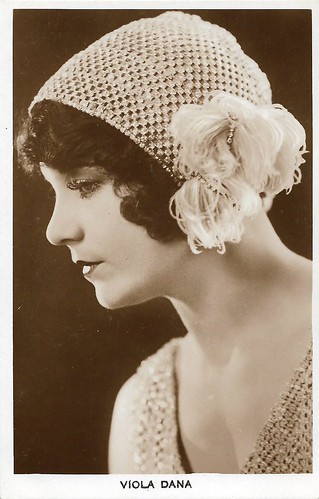 See for more vintage postcards of Hollywood stars our albums at on Flickr: Vintage B&W Hollywood and Hollywood Colour Postcards.