Wheeler & Woolsey were an American comedy double act. They performed together in slapstick comedy films for RKO from the late 1920s until Robert Woolsey's death in 1938. Curly-haired Bert Wheeler (1895–1968) played an ever-smiling innocent, who was easily led and not very bright, but who would also sometimes display a stubborn streak of conscience. Bespectacled Robert 'Bob' Woolsey (1888–1938) played a genially leering, cigar-smoking, fast-talking idea man who often got the pair in trouble. Wheeler & Woolsey made 21 films together, a series that often pushed the boundaries of taste and logic. 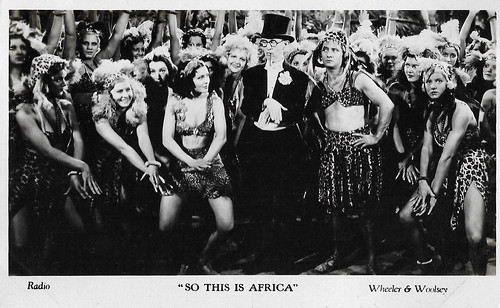 British postcard in the Filmshots series by Film Weekly. Photo: Radio. Publicity still for So This Is Africa (Edward F. Cline, 1933). The Columbia Pictures release So This Is Africa was made during a contract dispute of Wheeler and Woolsey with RKO. 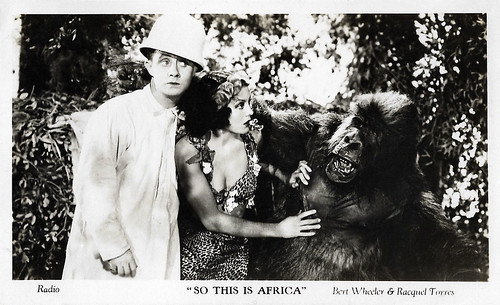 British postcard in the Filmshots series by Film Weekly. Photo: Radio. Publicity still for So This Is Africa (Edward F. Cline, 1933) with Bert Wheeler and Raquel Torres.

Albert Jerome Wheeler was born in 1895 in Paterson, New Jersey, USA. His mother died at the age of 17, when Bert was a baby. After becoming an orphan, he was raised by his father and aunt, and later by a step-mother.

Wheeler went to New York, where he tried to break into showbiz. He got his first break with Gus Edwards. Later, he worked as an actor in several shows, including The Gingerbread Man and When Dreams Come True.

During When Dreams Come True, he met his first wife, Margaret Grae, with whom he formed up a successful vaudeville team. Although being asked several times to make films, Wheeler stayed with vaudeville. In 1926 the couple divorced and Grae soon married another actor.

In 1927 Wheeler was signed by Florenz Ziegfeld Jr. for his show Rio Rita, where he was teamed with Robert Woolsey. They clicked and when Ziegfeld sold the screen rights of Rio Rita to the newly formed RKO studio as their official debut, they were the only actors in the cast who repeated their stage roles in the film version.

Rio Rita (Luther Reed, 1929) starring Bebe Daniels, was a success and this convinced them to become a permanent team. From 1930 until 1937, they made a series of 20 very popular comedy feature films, all for RKO Radio Pictures - with the exception of the Columbia production So This Is Africa (Edward F. Cline, 1933).

Bob Woolsey was often the huckster, his big cigar and waggling eyebrows wafting him into the direction of a gigantic but adoring woman. Bert Wheeler was a bit more conventional, but specialised in a special line of willful innocence that sometimes went to extremes; his specialty was singing and eating at the same time.

David Boxwell in the film journal Bright Lights: "Exhaustively citing all the sexual innuendo in Wheeler and Woolsey’s best films would be virtually impossible, but here are a few choice examples. In Diplomaniacs, the sexually aggressive Fifi tries to assassinate Woolsey’s character by kissing him to death, but he survives and causes the vamp to drop to the ground, her body smoking. Wheeler asks him: “Hey, where’s your cigar?” Woolsey confidently claims: “She swallowed it.” Sometimes a cigar is just a cigar, but never in a Wheeler and Woolsey film." 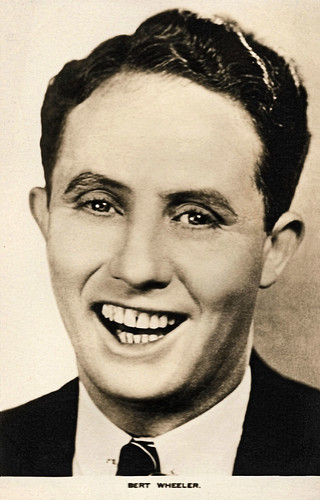 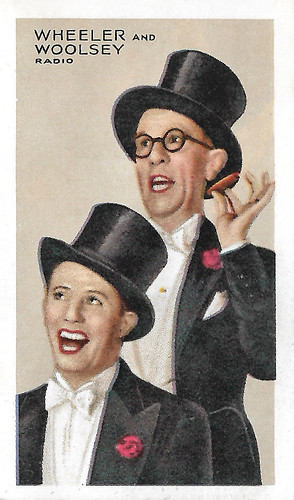 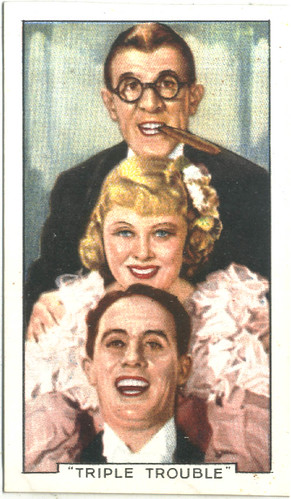 Robert Rolla Woolsey was born in 1888 in Oakland, California, USA. At the age of 7, his father died, leaving his mother and their six children in poverty. Four of the children died in their early years. To earn some money to support the family, Bob took odd jobs, before becoming a jockey. This career ended when the horse, Pink Star, the future Kentucky Derby winner of 1907, fell and broke Bob's leg.

Woolsey then went to work as a bellboy at the Hotel Sinton in Cincinnati, Ohio, where he came in contact with actors who saw possibilities for him as a comic in the theatre. He joined several vaudeville companies, and toured not only North America, but also the British Empire. In 1917, he married an eccentric dancer, Mignone Park Reed. The couple stayed together till his death.

In 1922, Woolsey appeared with W.C. Fields in The Blue Kitten, and he also wrote some plays. He hit it big, when he was signed for Florenz Ziegfeld Jr.'s Rio Rita in 1927, where he teamed up with Bert Wheeler. Due to their success, they were teamed up again in The Cuckoos (Paul Sloane, 1930), based on the Broadway show The Ramblers. It was another box office hit. Double-entendre gags were a hallmark of their comedies, although they were severely curtailed after the reconstitution of the Production Code in 1934. Dressing in drag and other forms of gender inversion were also staples of their films.

David Boxwell in Bright Lights: "Wheeler and Woolsey didn’t invent drag, but more than any other early sound comedy stars they cross-dressed with complete aplomb, and to hilarious effect. Wheeler often, but not always, plays femme to Woolsey’s butch, so he’s in drag more than the guy with the cigar, but Woolsey is dressed as a 'native girl' in a fetching leopard skin two-piece at the end of So This Is Africa — as he is abducted by a beefy “Tarzan” and taken into a hut for what will be a bout of unseen sex."

Mark Sandrich directed them in Hips Hips Hooray (1934) and Cockeyed Cavaliers (1934), both co-starring Thelma Todd and Dorothy Lee. After Sandrich was promoted to the Fred Astaire-Ginger Rogers musicals, he was replaced by George Stevens. Stevens directed them in Kentucky Kernels (1934) with Mary Carlisle, and The Nitwits (1935) with Betty Grable. After Stevens left the series, the quality of Wheeler & Woolsey's output dwindled. In some of these later films, Wheeler and Woolsey didn't even appear as a team, but as strangers who encounter each other by chance.

Robert Woolsey's health deteriorated in 1936, and after struggling to complete High Flyers (Edward Cline, 1937) with Lupe Velez, he was no longer able to work. Bob Woolsey died on 31 October 1938 of kidney disease. After his death, Bert Wheeler continued to work off and on through the 1960s, mostly on the stage, but sometimes also on television. In later years he formed a team with a new, young partner, Tommy Dillon, with whom he worked in Las Vegas and Manhattan's Latin Quarter.

Despite their great popularity in the 1930s, Wheeler & Woolsey are little known today. IMDb: "One of the reasons likely is the fact that their films were not packaged and sold to television in the 1950s, unlike The Three Stooges and Laurel & Hardy, who then went on to entertain new generations of fans. (...) Their shorts were geared towards adults, and even in the 1930s, they were considered vulgar, and thus would have been inappropriate on television in the 1950s as the comedy shorts of the Stooges and Laurel & Hardy were programmed for children." 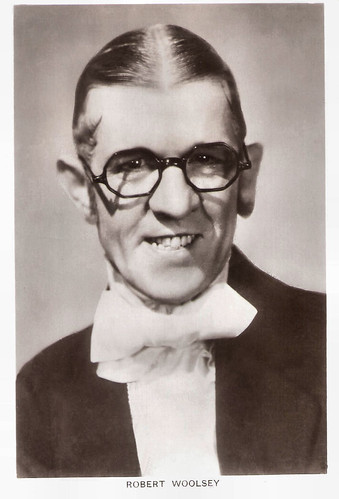 Robert Woolsey. British postcard in the Picturegoer Series, London, no. 514. 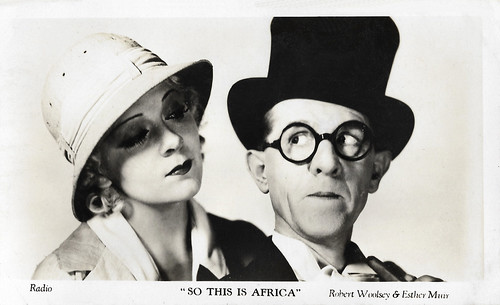 British postcard in the Filmshots series by Film Weekly. Photo: Radio. Publicity still for So This Is Africa (Edward F. Cline, 1933) with Esther Muir and Robert Woolsey.