No one could do better that particular thing British actor Rex Harrison (1908 - 1990) did: the quizzical, elegant, sexually predatory man-about-town. He is best known for his portrayal of Professor Henry Higgins in the classic musical My Fair Lady (1964). 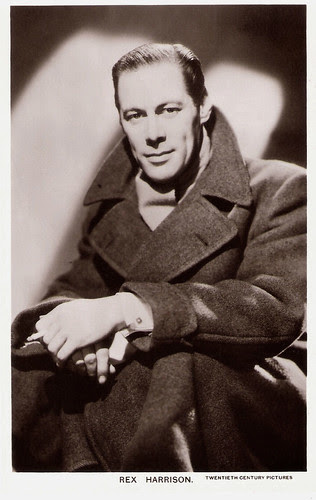 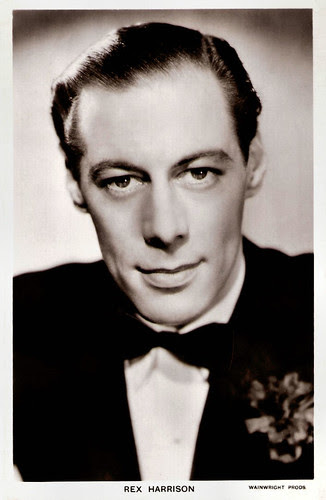 Dinner jackets
Reginald Carey Harrison was born in 1908 in Huyton, England, a granite-quarrying town six miles east of Liverpool. His parents were William Reginald Harrison, a cotton broker, and Edith Carey Harrison. As a young boy, he changed his name to Rex knowing it was the Latin word for King. He never had any acting lessons when he started out on his theater career at age 18, but he soon landed roles in the West End. Brian McFarlane notes in the Encyclopedia of British Film that Harrison wore a lot of dinner jackets in 1930's British theatre. French Without Tears (1937), a play by Terence Rattigan, proved to be his breakthrough role. Noel Coward said "Rex Harrison is the greatest interpreter of high comedy in the world ... next to Me". Rex was not considered for the 1940 film version of French Without Tears since he was unknown in Hollywood. His film debut had been in The Great Game (1930, Jack Raymond), and other films he appeared in were Storm in a Teacup (1937, Ian Dalrymple, Victor Saville) with Vivien Leigh, Sidewalks of London (1938, Tim Whelan) with Charles Laughton, The Citadel (1938, King Vidor) starring Robert Donat, Night Train to Munich (1940, Carol Reed) opposite Margaret Lockwood, Major Barbara (1941, Gabriel Pascal) with Wendy Hiller, based on the novel by G.B. Shaw, and the fantastical comedy Blithe Spirit (1945, David Lean) based on the play by Noel Coward. Having divorced his first wife Collette Thomas in 1942, Harrison married German actress Lilli Palmer in 1943. They would appear together in many plays and films, including The Rake's Progress (1945, Sidney Gilliat). 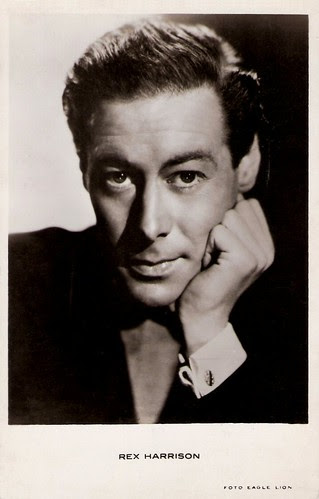 Sexy Rexy
Rex Harrison attained international fame when he portrayed the King in Anna and the King of Siam (1946, John Cromwell), his first American film. His next film, The Ghost and Mrs. Muir (1947, Joseph L. Mankiewicz), was another big hit. From then on he was more likely to be filming in Hollywood than Britain. He became known in the press as 'Sexy Rexy' for his philandering ways and magnetic charm. After a sex scandal, in which starlet Carole Landis apparently committed suicide because he ended their affair, the relationship with wife Lilli became strained. The scandal also damaged his career and his contract with Fox was ended by mutual consent. He began a relationship with British actress Kay Kendall and divorced Lilli to marry the terminally ill Kay with hopes of a re-marriage to Palmer upon Kay's death. The death of Kay affected Harrison greatly and Lilli never returned to him. On stage he alternated appearances in London and New York, winning a Tony Award in 1949 for his appearance as Henry VIII in Anne of the Thousand Days. He was best known for his portrayal of Henry Higgins, the sharp-tongued professor of phonetics in My Fair Lady, the musical by Frederick Loewe with lyrics by Alan Jay Lerner, based on George Bernard Shaw's play Pygmalion. He was in the original production of 1956, won the Tony for the play in 1957 and an Oscar for the 1964 film version by George Cukor. When he accepted his Academy Award for My Fair Lady, he dedicated it to his 'two fair ladies', Audrey Hepburn and Julie Andrews. Andrews had played cockney flower girl Eliza Doolittle in the Broadway production, but was passed over for the film version in favor of Hepburn. 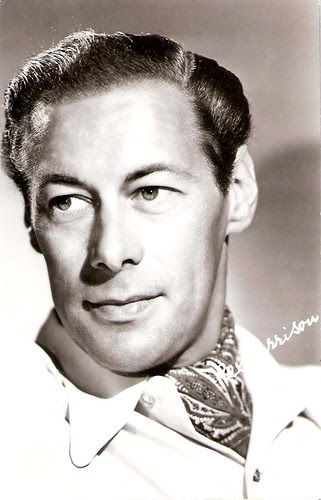 The Quizzical, Elegant, Sexually Predatory Man-about-town
No one could do better that particular thing Rex Harrison did: the quizzical, elegant, sexually predatory man-about-town. The film that enshrines the persona most vividly is The Rake's Progress (1945, Sidney Gilliat), in which he plays the caddish philanderer who redeems himself in World War II. (He himself had served in the RAF). Although he excelled in comedy, he attracted favourable notices in dramatic roles such as his witty, cynical portrayal of Julius Caesar in Cleopatra (1963, Joseph L. Mankiewicz) starring Elizabeth Taylor. For his role, he was nominated for an Academy Award in 1963. Famous critic Bosley Crowther wrote in The New York Times: "Caesar is no fustian tyrant. Played stunningly by Rex Harrison, he is a statesman of manifest wisdom, shrewdness and magnanimity. And he is also a fascinating study in political ambiguities. Mr. Harrison's faceted performance is the best in the film." Harrison reived more acclaim for his part as Pope Julius II in The Agony and the Ecstasy (1965, Carol Reed), opposite Charlton Heston as Michelangelo. He also appeared as an aging homosexual opposite Richard Burton as his lover in Staircase (1969, Stanley Donen). Harrison retired from films after making The Fifth Musketeer (1979, Ken Annakin) and A Time to Die (1982, Matt Cimber), but he continued to act on stage and television. In 1981 he returned to the role of Professor Higgins, to repeated standing ovations, in a 1981 Broadway revival of My Fair Lady, in which he was given total artistic control. He starred again on Broadway in a revival of Somerset Maugham's comedy The Circle until three weeks before his death. At 82, Rex Harrison died of pancreatic cancer in 1990 at his home in Manhattan. He was married six times. In 1962 he had married actress Rachel Roberts. This union and the one following it to Elizabeth Harris (Richard's ex) also ended in divorce. In 1978 Rex met and married Mercia Tinker. They remained happily married until his death. She was also with him in 1989 when he was knighted by Queen Elizabeth II at Buckingham Palace. He was the father, with Lilli Palmer, of novelist/playwright Carey Harrison, and the father, with Collette Thomas, of actor/singer Noel Harrison. He had five grandchildren, including actress Cathryn Harrison. Harrison's autobiography, A Damned Serious Business: My Life in Comedy, was published posthumously in 1991.


Rex Harrison asks the question Why Can't a Woman Be More Like a Man? in My Fair Lady (1964). Source: Bravo Divine (YouTube).

What a wonderful site. I could spend days looking sround here. Thank you for all your hard work.

Thanks for stopping by. I read your post on Fraulein. Can't wait to see it.

Oh... that looks like a fun film...Wonder if it's on DVD.﻿ Anything with Margaret Rutherford is great.