Pauline Frederick (1883-1938) was an American stage and film actress. Frederick made a name for herself in the theatre and had already passed thirty when she became successful in Hollywood. In the era of the silent film she was one of the most powerful actresses in the film industry. 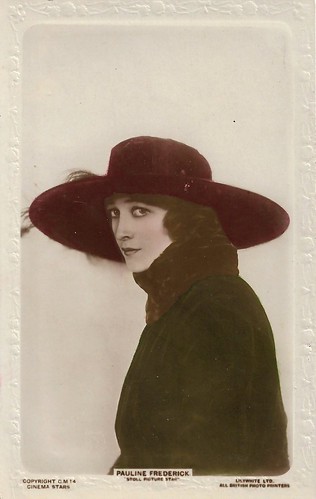 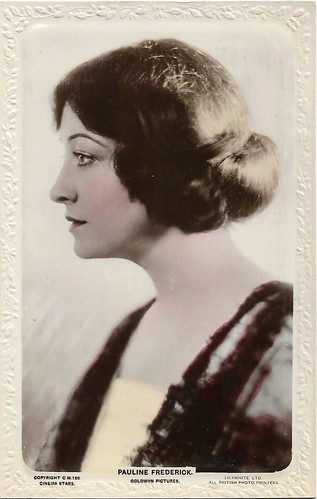 
Pauline Frederick was born Pauline Beatrice Libbey in 1883 in Boston, USA, as the daughter of a prosperous couple, Richard O. and Loretta C. Libbey.

Her father worked as a yardmaster for the Old Colony Railroad before becoming a salesman. Her parents separated when she was a toddler and Frederick was raised primarily by her mother to whom she remained close for the remainder of her life.

As a child, Frederick was already interested in show business. Inspired by the theatre, she took singing lessons, and at the age of 19, she was accepted at the Boston Music Hall. When she got the thread, she packed her suitcases and moved with her mother to New York City.

Then known as Pauline Libby, she changed her surname to 'Frederick'. All this to the displeasure of her father, who got his daughter removed from his will in revenge. She legally changed her name to Pauline Frederick in 1908. In New York, Frederick started as a choir girl, but soon she made her debut on Broadway. Her first breakthrough came in 1904 when as an understudy she had to replace the lead actress in It Happened in Norland.

Frederick's heart lay with melodramas, and in the end she chose to neglect the opera. In 1908, Frederick became infertile because of a serious car accident. A year later she married Frank Mills Andrews. During this two-year marriage she stopped acting. In 1913, she secured her success when she returned to the stage with the leading role in Joseph and His Brethren.

In 1914, Pauline Frederick was hired by the film studio Famous Players and made her film debut in The Eternal City (Hugh Ford, Edwin S. Porter, 1915), a religious drama that was shot in Rome just before the outbreak of the First World War. Frederick saw the film industry as a temporary get-away, but encouraged by the success of The Eternal City she signed a contract.

Although she had already passed 30, she became one of the biggest stars in the silent film period. She played mainly sophisticated or demanding, classy women and femme fatales.

On the set of Nannette of the Wilds (Joseph Kaufman, 1916), the film that critics have renamed the worst of her career, she met actor Willard Mack. They fell in love and married in September 1917. 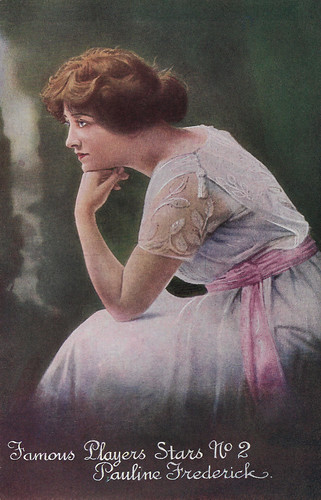 British postcard in the Famous Players Stars Series, no. 2. 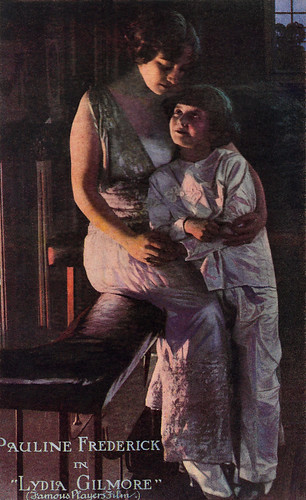 A role model and style icon for elder women


In 1919, Pauline Frederick signed a contract with Goldwyn Pictures. Critics agreed that she was assigned roles here that were more suitable for her. The budget of her films was larger and the films were better received in terms of quality. Although her career ran smoothly, her private life was a disaster. Mack was a violent alcoholic and drug addict who regularly mistreated his wife. In 1919 she applied for a divorce.

As a result of the relocation of Goldwyn, Frederick moved to California in 1920. That same year she played in Madame X (Frank Lloyd, 1920), the film she became best known for. Despite the success she enjoyed at Goldwyn, she left the studio for a contract with Robertson-Cole, where she received a fixed salary of $7,000 per week. Her move to Robertson-Cole was a misstep in her career. Most films flopped and reviewers spoke negatively about them. In 1922 her contract was terminated and she returned to the stage.

In 1924, she was hired by the Vitagraph Company, where she achieved success in films such as Three Women (Ernst Lubitsch, 1924) with May McAvoy and Marie Prevost, and Smouldering Fires (Clarence Brown, 1925) with Laura La Plante and Malcolm McGregor. Frederick became a role model and style icon for elder women. After a short time she left the studio to go on tour. In March 1927, she received some of her better reviews when she appeared in the play Madame X in London.

After her return to Hollywood, she did not manage to become as successful as before, but the film roles kept on coming. In 1928, Frederick's first sound film, On Trial (Archie Mayo, 1928), was released. Her voice was poorly received, but film historians blame this on the bad sound techniques. Technological progress went smoothly and eventually the actress made a good transition to the new film medium. She was cast as Joan Crawford's mother in This Modern Age (Nick Grinde, 1931). In spite of this, Frederick lost her prestige. Actors were massively exchanged for new talent. Similarly for Frederick, who managed to get film roles only with difficulty.

In the 1930s, Frederick underwent one setback after another. She returned to Broadway in 1932 in When the Bough Breaks, but because of the Great Depression she had trouble getting roles. Frederick filed for bankruptcy in 1933. She was in several short-term marriages and in the autumn of 1934 her fifth husband, Joseph Marmon, died of cancer. In the meantime she took care of her mother, whose health seriously deteriorated.

After her last theatre appearance in New York in 1936, she returned to Hollywood. Her final film was Thank You, Mr. Moto (Norman Foster, 1937) with Peter Lorre in the title role. Her mother died in February 1938 and Frederick suffered from severe asthma attacks. She did not recover from this and passed away in September 1938 at the age of 55.

Greta the Groat writes about her: “Pauline Frederick is one of the most interesting and individual stars of the American silent screen. In an era of gentle and sweet heroines--even among the 'emotional actresses', Frederick stood out with her dramatic looks, commanding presence and worldly characters. While never a top box office draw, Frederick was always something of a connoisseur's star, and her subtle and cinematic acting technique was widely admired both by audiences and within the industry. Unfortunately for modern audiences, only a handful of her many silent films survive. Those survivors, however, appear to have been among her best and most memorable, though they give us a somewhat skewed and limited view of her career.” 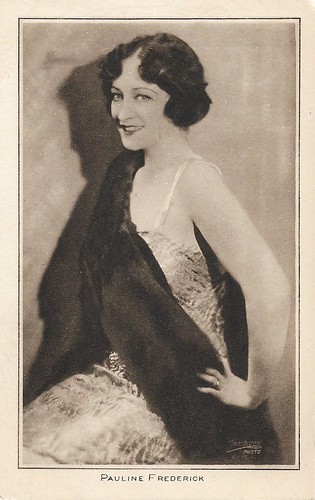 British postcard in the 'Pictures' Portrait Gallery, no. 106. 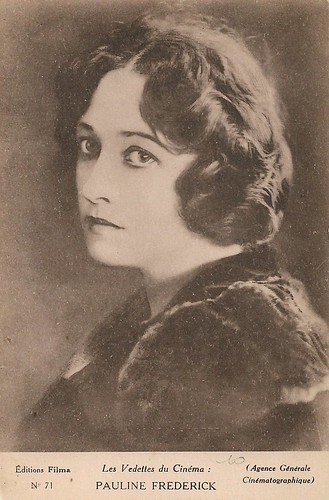 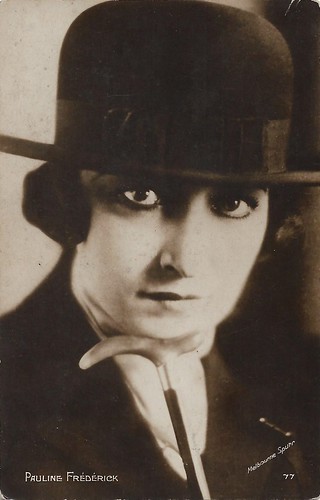