American actress and producer Michelle Pfeiffer (1958) was one of the most popular and talented Hollywood actresses of the 1980s and 1990s. Her rare beauty inspired countless platitudes and an almost-permanent place on People's Fifty Most Beautiful list. But Pfeiffer has since become particularly known for portraying nuanced and unglamorous, emotionally distant women as well as strong female characters with intense sex appeal. 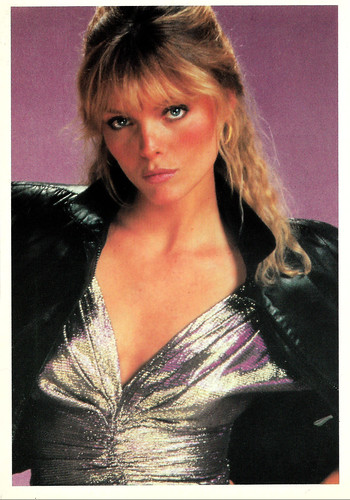 Spanish postcard in the Collección 'Estrellas cinematográficas', by CACITEL, no. 44, 1990. Michelle Pfeiffer in Grease 2 (Patricia Birch, 1982). 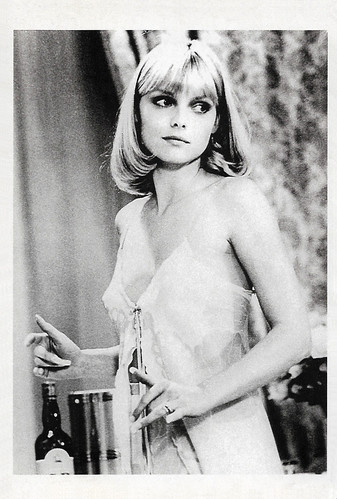 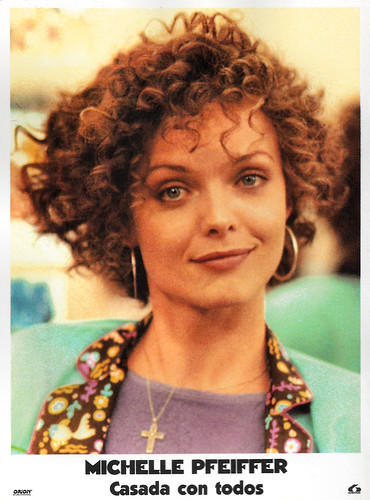 
Michelle Marie Pfeiffer was born in 1958 in Santa Ana, California, to Donna Jean (Taverna) and Richard Pfeiffer, a heating and air-conditioning contractor. She graduated from Fountain Valley High School in 1976, and attended one year at the Golden West College, where she studied to become a court reporter. But at age 19, while working as a supermarket checker at Vons, a large Southern California grocery chain, she had an epiphany of sorts while a woman was complaining about the cantaloupe. She entered a beauty contest, seeking a ticket out of retail.

In 1978, Pfeiffer won the Miss Orange County beauty pageant, and participated in the Miss California contest the same year, finishing in sixth place. She auditioned for commercials and modeling assignments while she attended acting school. She made her acting debut in a one-line role on the TV series Fantasy Island (1978), and played several other minor roles in television series and films.

Her first leading role was in the musical film Grease 2 (Patricia Birch, 1982) opposite Maxwell Caulfield. It was the sequel to the popular hit film Grease (Randal Kleiser, 1978) and takes place two years after the original film at Rydell High School, set in the 1961–1962 school year. Although the film was poorly received, it increased public interest in Pfeiffer.

On her early screen roles, she asserted in a 1995 interview in The New York Times: "I needed to learn how to act ... in the meantime, I was playing bimbos and cashing in on my looks." Frustrated with being typecast as the token pretty girl, Pfeiffer actively pursued more serious material. She received strong reviews for her breakout performance as cocaine-addicted trophy wife Elvira Hancock in the crime film Scarface (Brian De Palma, 1983) opposite Al Pacino. The violent film became a commercial hit and gained a large cult following over the years.

Following Scarface, she played Diana in John Landis' comedy Into the Night (1985), with Jeff Goldblum, Isabeau d'Anjou in Richard Donner's fantasy adventure Ladyhawke (1985), with Rutger Hauer and Matthew Broderick. Her performance as one of the three women bedevilled by Jack Nicholson - the other two being Cher and Susan Sarandon - in the dark fantasy The Witches of Eastwick (George Miller, 1987) proved to be one of her first box office successes.

Pfeiffer then was cast against type as a murdered mobster's widow in the Mafia comedy Married to the Mob (Jonathan Demme, 1988). For the role of big-haired and gum-smacking Angela de Marco, she donned a curly brunette wig and a Brooklyn accent. She received her first Golden Globe Award nomination as Best Actress in a Motion Picture Musical or Comedy, beginning a six-year streak of consecutive Best Actress nominations at the Golden Globes.

In Dangerous Liaisons (Stephen Frears, 1988) based on Christopher Hampton's play Les liaisons dangereuses,  she played the virtuous victim of seduction, Madame Marie de Tourvel, opposite with Glenn Close and John Malkovich. Her role garnered her an Academy Award nomination for Best Supporting Actress.

Then followed her sultry performance as a hard-edged former call girl turned lounge singer, Susie Diamond in The Fabulous Baker Boys (Steve Kloves, 1989) with Jeff and Beau Bridges. She underwent intensive voice training for the role for four months, and performed all of her character's vocals. Classic is her scene in which the lounge singer drapes herself over a piano cooing a heart-stopping rendition of 'Making Whoopee'. Susie would be the most critically acclaimed role of her career and she got another Academy Award nomination, now for Best Actress. 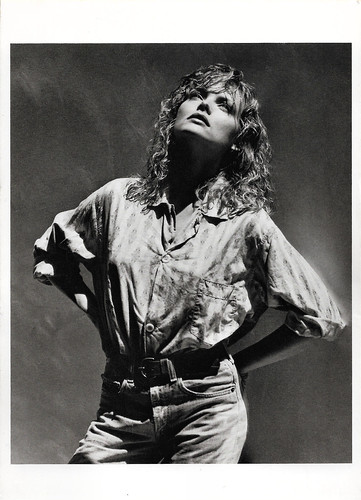 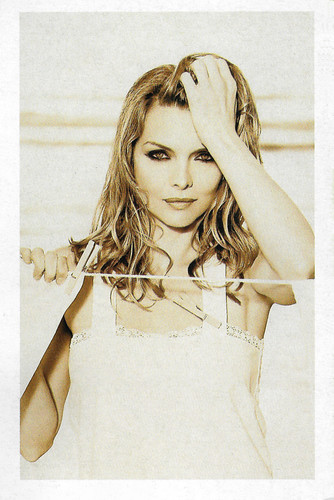 The definitive portrayal of Catwoman


In 1981, Michelle Pfeiffer had married actor/director Peter Horton, known as Gary in the television series Thirtysomething. They were later divorced, and she then had a three year relationship with actor Fisher Stevens. When that did not work out, Pfeiffer decided she did not want to wait any longer before having her own family, and in March 1993, she adopted a baby girl, Claudia Rose. Later the same year, she married lawyer-turned-writer/producer David E. Kelley, creator of such series as Ally McBeal and Boston Legal. In 1994, their son John Henry was born.

The 1990s proved to be a good decade for Pfeiffer. She starred opposite Al Pacino as the mousy, severely damaged waitress Frankie in the romantic comedy Frankie and Johnny (Garry Marshall, 1991). She achieved widespread recognition as Catwoman / Selina Kyle in Tim Burton's superhero film Batman Returns (1992). For the role, she trained in martial arts and kickboxing. Her stitched-together, black patent leather costume, based on a sketch of Burton's, remains the character's most iconic look, and Pfeiffer's growling, fierce performance is widely regarded as one of the most definitive portrayals of the comic book character.

She earned a third Academy Award nomination for her role as a frustrated housewife in the virtually unseen Love Field (Jonathan Kaplan, 1992), before starring in the critically acclaimed The Age of Innocence (Martin Scorsese, 1993) with Daniel Day Lewis. She portrayed a Countess in upper-class New York City in the 1870s. It was followed by the romantic horror film Wolf (Mike Nichols, 1994) with Jack Nicholson, the supernatural horror film What Lies Beneath (Robert Zemeckis, 2000) with Harrison Ford, and White Oleander (Peter Kosminsky, 2002). From 1990 till 1999 she also produced a series of films under her production company Via Rosa Productions.

After a five-year hiatus from film acting in order to spend more quality time with her children and family, Pfeiffer appeared in Hairspray (Adam Shankman, 2007), the film adaptation of the Broadway musical of the same name. She starred with John Travolta, Christopher Walken, Zac Efron and Queen Latifah, in the role of Velma Von Tussle, the racist manager of a television station.

Then followed Colette's Chéri (Stephen Frears, 2009), as ageing retired courtesan Léa de Lonval, with Rupert Friend in the title role, and Kathy Bates as his mother. Pfeiffer reunited with Tim Burton in Dark Shadows (Tim Burton, 2012), based on the Gothic television soap opera of the same name. In the film, co-starring Johnny Depp, Eva Green, and Helena Bonham Carter, she played Elizabeth Collins Stoddard, the stern and strict, but loyal and devoted family matriarch.

Recently, Michelle Pfeiffer received her first Emmy Award nomination for portraying Ruth Madoff in the HBO television film The Wizard of Lies (Barry Levinson, 2017). Robert De Niro played her husband, disgraced financier Bernard Madoff. She garnered further critical acclaim for her role in Where Is Kyra? (Andrew Dosunmu, 2017) with Kiefer Sutherland. Pfeiffer also appeared in the ensemble films Murder on the Orient Express (Kenneth Branagh, 2017) and Ant-Man and the Wasp (Peyton Reed, 2018). Later this year, she can be seen in the superhero film Avengers: Endgame (Joe Russo, Anthony Russo, 2019). 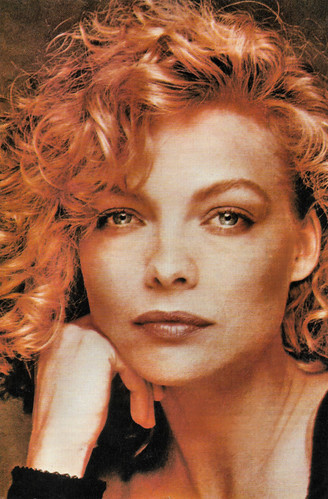