American actress Shelley Winters (1920-2006) appeared in dozens of films, as well as on stage and television. She was a major film presence for six decades, and turned herself from a Blonde Bombshell into a widely-respected actress who won two Oscars, for The Diary of Anne Frank (1959) and A Patch of Blue (1965). Less known, Winters also appeared in several European films, including Alfie (1966) and Roman Polanski's Le Locataire (1976). 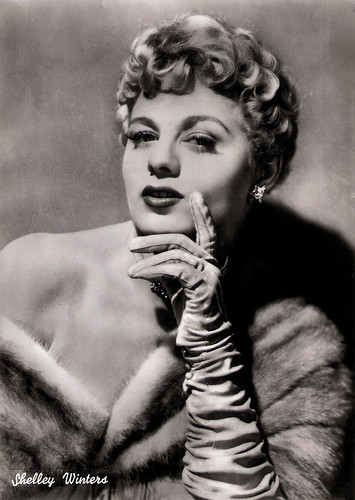 Italian postcard by Bromofoto, Milano, no. 273. 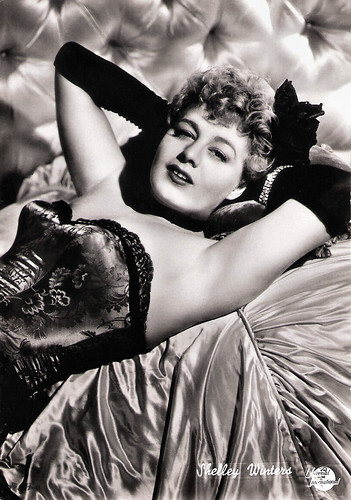 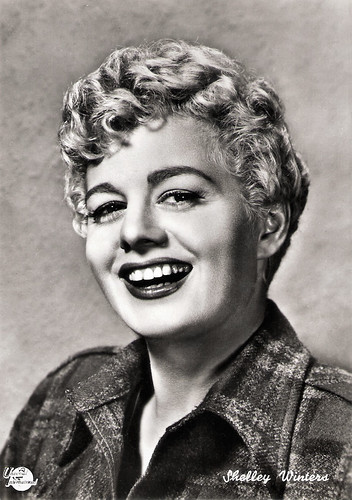 The limitations of the Blonde Bombshell role


Shelley Winters was born Shirley Schrift in St. Louis, Missouri, in 1920. She was the daughter of Rose (née Winter), a singer with The Muny, and Jonas Schrift, a designer of men's clothing; her parents were Jewish immigrants. Her family moved to Brooklyn, New York when she was three years old.

Winters studied at The New School in New York City, where she appeared in high school plays. Her first film was What a Woman! (Irving Cummings, 1943) starring Rosalind Russell. Throughout the 1940s, she mostly played bit roles and studied in the Hollywood Studio Club.

In the late 1940s, she shared an apartment with another newcomer, Marilyn Monroe. Winters achieved stardom with her breakout performance as the the party girl waitress who ends as the victim of insane actor Ronald Colman in A Double Life (George Cukor, 1947).

She quickly ascended in Hollywood with leading roles in The Great Gatsby (Elliott Nugent, 1949) with Alan Ladd, and Winchester 73 (Anthony Mann, 1950), opposite James Stewart. Universal Pictures built her up as a Blonde Bombshell but she quickly tired of the role's limitations.

She washed off her makeup and played against type to set up Elizabeth Taylor's beauty in A Place in the Sun (George Stevens, 1951), still a landmark American film. Her performance brought Winters acclaim and a nomination for the Academy Award for Best Actress.

Throughout the 1950s, Winters continued to star in films, including Meet Danny Wilson (Joseph Pevney, 1952) as Frank Sinatra's leading lady, and most notably in Charles Laughton's Night of the Hunter (1955), with Robert Mitchum and Lillian Gish.

In Great Britain she played in the Christopher Isherwood adaptation I Am a Camera (Henry Cornelius, 1955) opposite Julie Harris and Laurence Harvey, and in Italy in Mambo (Robert Rossen, 1954) opposite Silvana Mangano and her second husband Vittorio Gassman.

She also returned to the stage on various occasions during this time, including a Broadway run in 'A Hatful of Rain' (1955–1956), opposite future, third husband Anthony Franciosa. Although she was now in demand as a character actress, Winters continued to study her craft. She attended Charles Laughton's Shakespeare classes and worked at the Actors Studio, both as student and teacher. 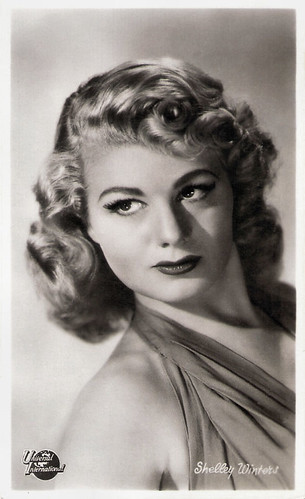 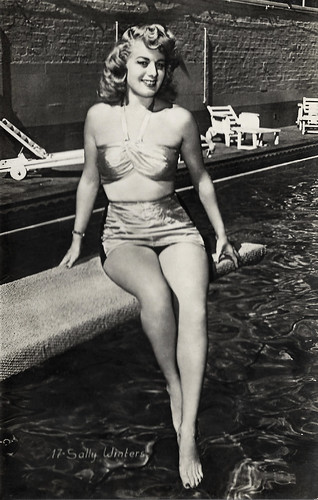 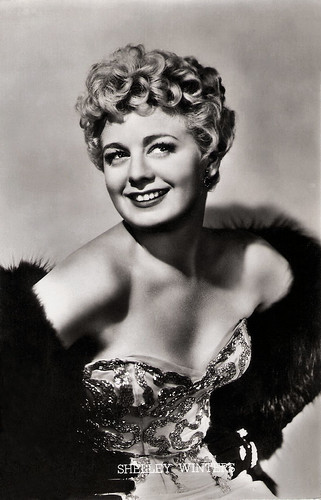 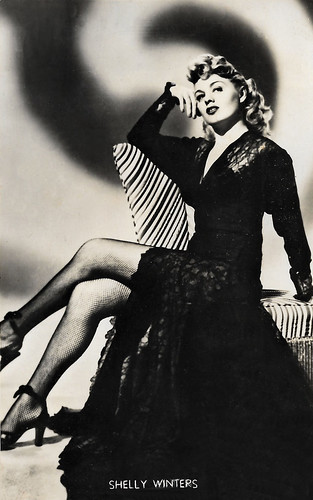 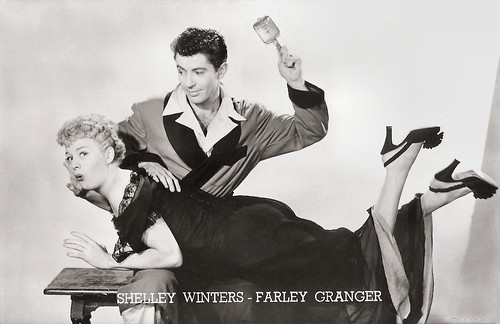 The following decade she could be seen in The Poseidon Adventure (Ronald Neame, 1972) as the ill-fated Belle Rosen (for which she received her final Oscar nomination), and in Next Stop, Greenwich Village (Paul Mazursky, 1976).

She also returned to the stage during the 1960s and 1970s, most notably in Tennessee Williams' 'Night of the Iguana'. She appeared in such cult films as Wild in the Streets (Barry Shear, 1968), Bloody Mama (Roger Corman, 1970) and Whoever Slew Auntie Roo? (Curtis Harrington, 1971). She also starred in the Broadway musical 'Minnie's Boys' (1970) as Minnie Marx, the mother of Groucho, Harpo, Chico, Zeppo, and Gummo Marx.

During her 50 years as a widely known personality, Winters was rarely out of the news. Her stormy marriages, her romances with famous stars, her forays into politics, and feminist causes kept her name before the public. She delighted in giving provocative interviews and seemed to have an opinion on everything.

That led to a second career as a writer. She recalled her conquests in her autobiographies, like 'Shelley Also Known As Shirley', and wrote of a yearly rendezvous she kept with William Holden, as well as her affairs with Sean Connery, Burt Lancaster, Errol Flynn, Farley Granger and Marlon Brando.

Winters gained significant weight later in life, but lost much of it for (or before) an appearance at the 1998 Academy Awards telecast, which featured a tribute to Oscar winners past and present. In a recurring role in the 1990s, Winters played the title character's grandmother on the ABC sitcom Roseanne.

Her final film roles were supporting ones: she played a restaurant owner and mother of an overweight cook in Heavy (James Mangold, 1995), with Liv Tyler and Debbie Harry, and as an aristocrat in The Portrait of a Lady (Jane Campion, 1996), starring Nicole Kidman and John Malkovich. Her final film was the Italian comedy La bomba (Giulio Base, 1999) with her former husband Vittorio Gassman (whose last film this was too) and his son Alessandro Gassman.

Winters was married four times; her husbands were: Captain Mack Paul Mayer, whom she married on New Year's Day, 1942; they divorced in October 1948. Winters wore his wedding ring up until her death, and kept their relationship very private. In 1952, she married Vittorio Gassman. They divorced in 1954 and had one child, Vittoria (1953), a physician, who practices internal medicine at Norwalk Hospital in Norwalk, Connecticut. She was Winters' only child. Later husbands were Anthony Franciosa (1957-1960) and long-time companion Gerry DeFord, whom she married hours before her death in 2006.

Shelley Winters died at the age of 85 on 14 January 2006, of heart failure at the Rehabilitation Centre of Beverly Hills. 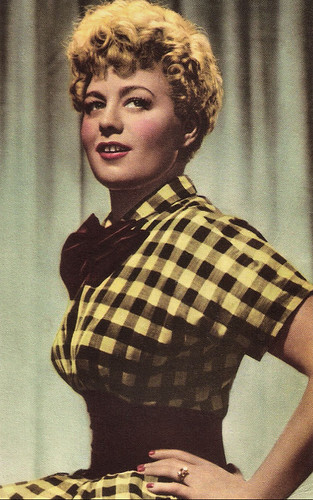 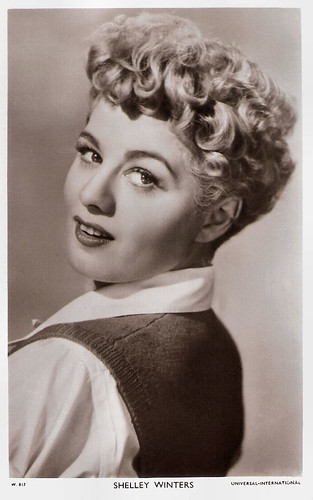 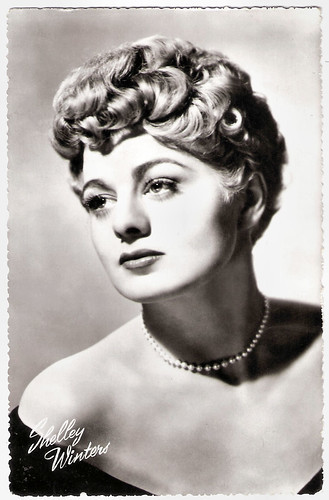 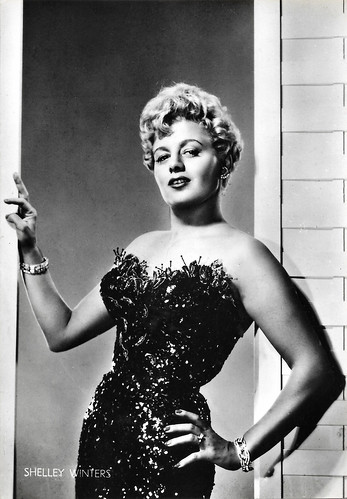 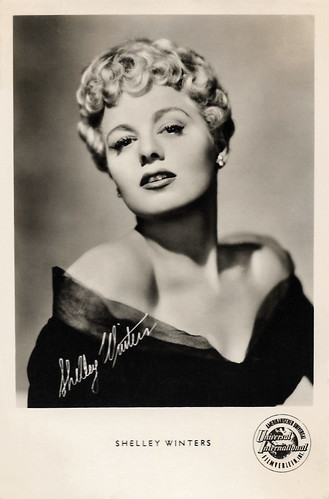