Temperamental and beautiful Viviane Romance (1912-1991) played dozens of flirts, femme fatales and fallen women in black & white classics of the French cinema of the 1930s and 1940s. 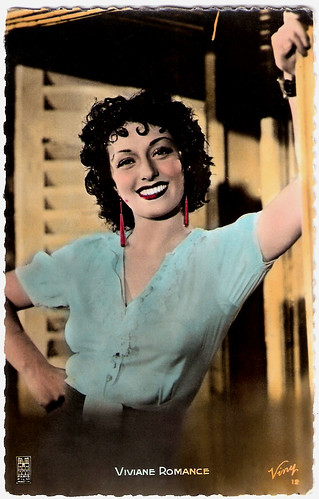 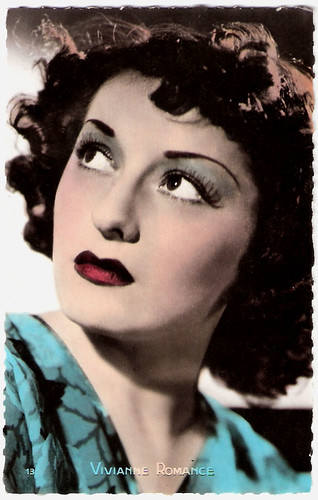 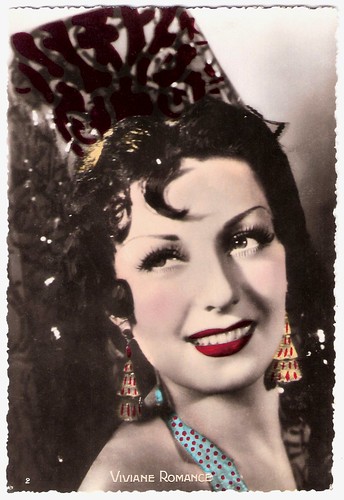 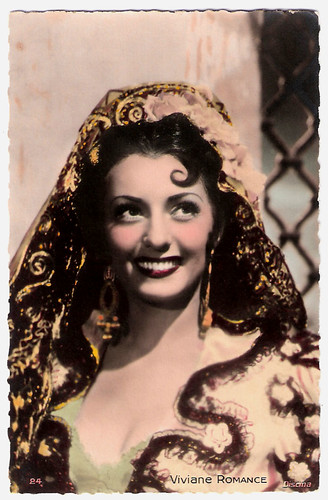 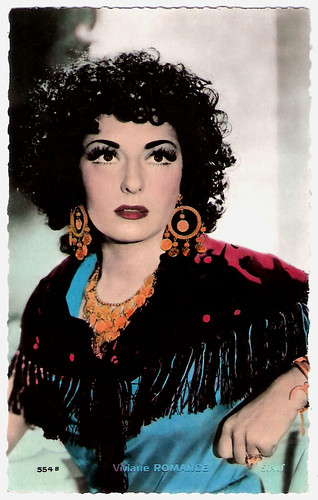 At 13, she made her debut as a bit player at the Théâtre Sarah-Bernhardt, then did some modelling work, and at 14, she joined the troupe at the Moulin Rouge in Paris. She also performed the 'Can-can' at the legendary Parisian nightclub Bal Tabarin. In 1930, Viviane was elected Miss Paris, and caused a small scandal because she had a child.

She made her film debut with a cameo role in Paris-girls (Henry Roussell, 1929) with Fernand Fabre. She appeared in several films over the next few years, including La Chienne/The Bitch (Jean Renoir, 1931), Liliom (Fritz Lang, 1934), and Zouzou (Marc Allégret, 1934). Opposite Jean Gabin, she played in La Bandera/The Bandage (Julien Duvivier, 1935).

Princesse Tam Tam/Princess Tam Tam (Edmond T. Gréville, 1935) was a French adaptation of G.B. Shaw's Pygmalion with Josephine Baker as a beautiful native African woman, who is ‘westernised’ by a handsome writer and then introduced to high society as an exotic princess.

Viviane Romance made a strong impression in La belle équipe/The Good Crew (Julien Duvivier, 1936) as the sensual Gina who plots the destruction of Jean Gabin’s character because he refuses to make love to her. La belle équipe constituted a milestone in the French Cinema. From this time on Romance was regarded as one of France's leading film actresses and an insurance at the box office. 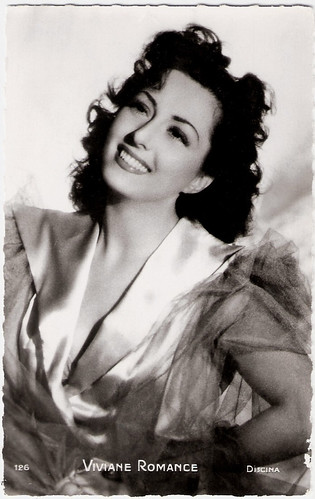 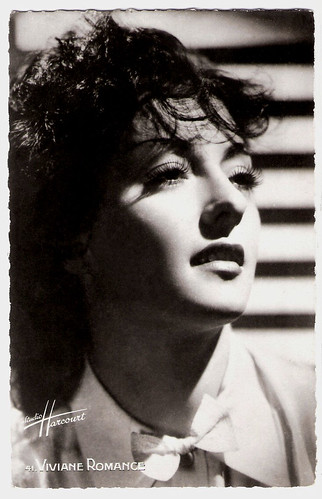 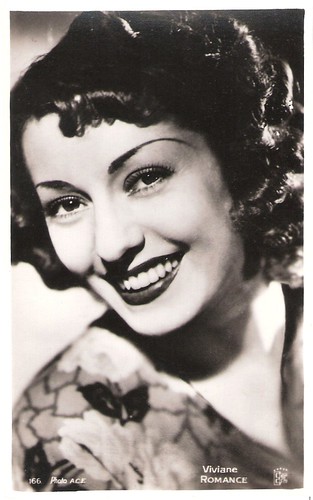 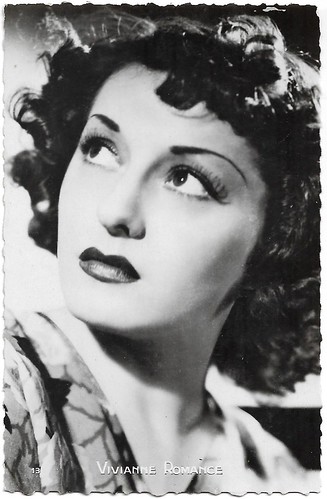 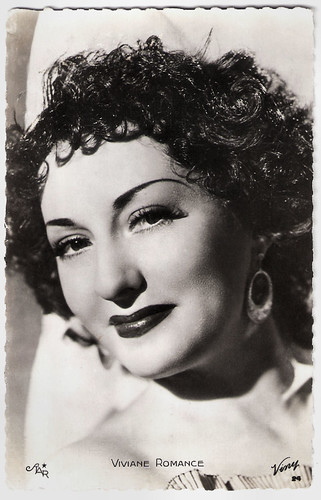 Fallen Women With Hearts of Gold


Viviane Romance reportedly was offered a Hollywood film contract, but she rejected. She preferred to make films in her native France and many noted directors asked her to. However, she also resided for many years in Italy where she made several Italian language films in the 1950s.

Throughout her career she played dozens of exotic femme fatales, courtesans, vamps and fallen women with hearts of gold. Among her best films during the occupation of France were Angélica/Blood Red Rose (Jean Choux, 1940), and the excellent melodrama Vénus aveugle/Blind Venus (Abel Gance, 1941). She also starred in the title role of Carmen (Christian-Jaque, 1944), a French-Italian version of the famous opera by Georges Bizet.

After the war followed the dark thriller Panique/Panic (Julien Duvivier, 1946) based on a novel by Georges Siménon, Passion (Georges Lampin, 1951) and the anthology film Les Sept péchés capitaux/The Seven Deadly Sins (Yves Allégret, 1952). Her last film from this period was Pitié pour les vamps/Pity for the Vamps (Jean Josipovici, 1956).

She went into production with her then-husband Clément Duhour, but without much success. After 1956 her acting roles were few, and she suffered considerable financial hardship. In 1962, she starred with Jean Gabin in the suspenser Mélodie en sous-sol/Any Number Can Win (Henri Verneuil, 1962).

Eventually she re-appeared on television in the early 1970s. In 1973 she made one final film appearance in the thriller Nada/The Nada Gang (Claude Chabrol, 1974), answering a special request by director Claude Chabrol. It was her 65th film.

She published her memoirs, Romantique à mourir in 1986. Viviane Romance died of cancer in 1991 in Nice, France. She had married and divorced three times. Her spouses were actor Georges Flamant, actor Clément Duhour and director Jean Josipovici. 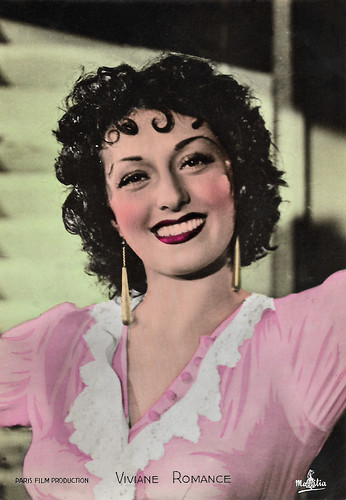 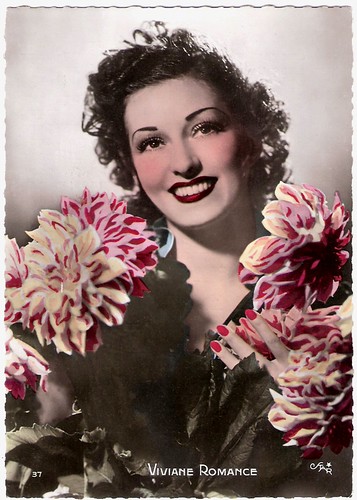 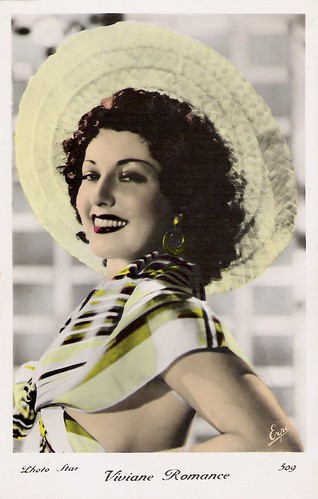 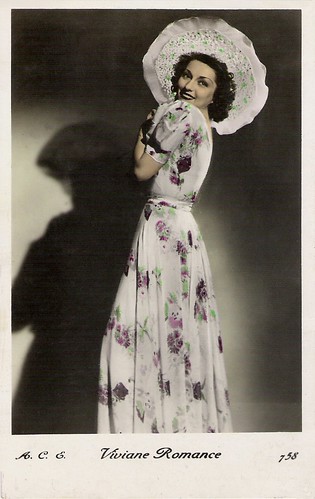 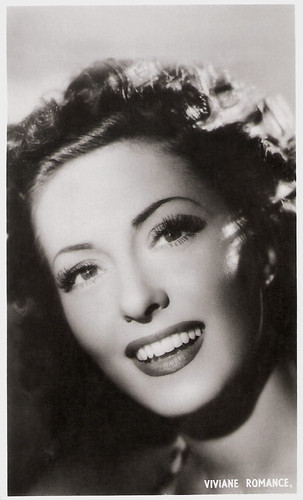 Vintage collectors card, no. A 62. 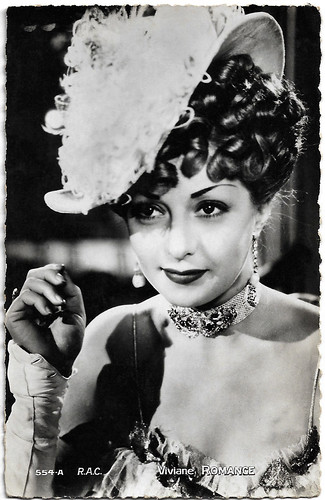 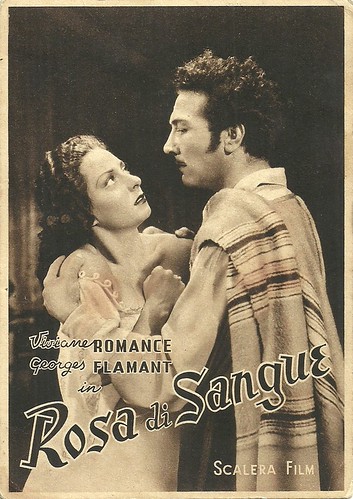 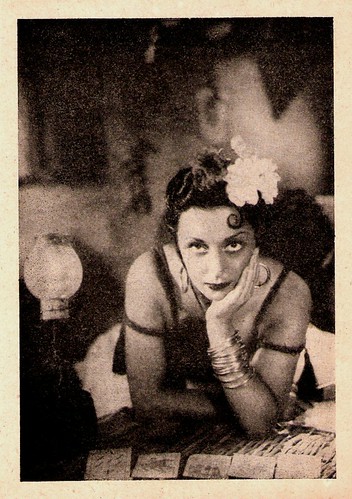 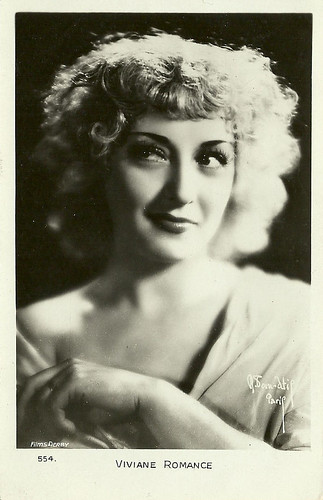 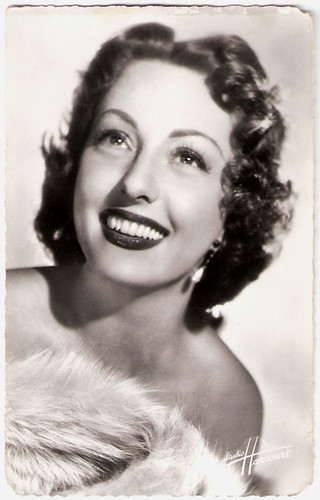 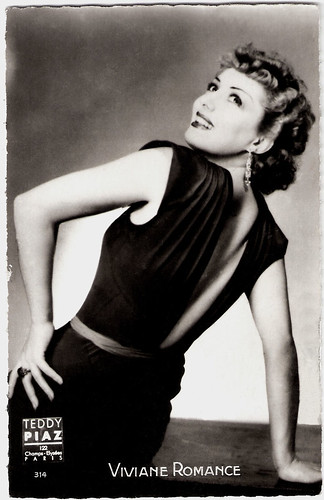 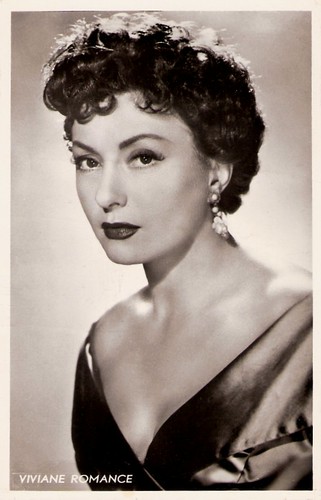 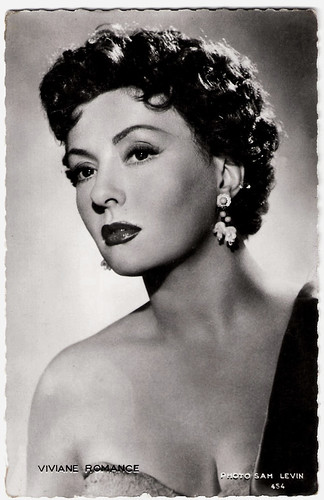 Another interesting French actress! Loved the Nada clip. Also, the reference to Georges Simenon brought back happy memories of watching Maigret on B&W TV many many years ago. Happy PFF.

I had no idea that the "fallen woman with a heart of gold" cliché dated as far back as this!

What a lovely woman. I'm sorry to hear she died of cancer. Awful stuff. What a brilliant career she had. Thank you for sharing her story. I read every word.

Thanks for the interesting info on Romance. Her stage name is very telling, isn't it?

Bob, another beauty and oh, so interesting. Thanks for sharing.
debby

What a heart throb! She has such a fresh and vivacious beauty! I want to read her juicy memoirs now:) Happy PFF ! I like your new slideshow too!

She really is quite stunning, and it sounds to me as though she had quite a personality.

She really is beautiful, isn't she?
A very impressive background too. Thanks for sharing this.

Have a beautiful weekend

What a beautiful woman.

I love reading the stories behind the people. Very interesting.