After achieving modest fame as an ice skater in her native Czechoslovakia, Vera Hruba (1923-2003) was brought to Hollywood by Republic Pictures head Herbert J. Yates, who hoped to turn her into the next Sonja Henie. After featuring her in two Ice-Capades films, he added 'Ralston' to her name and tried to pass her off as a leading lady. 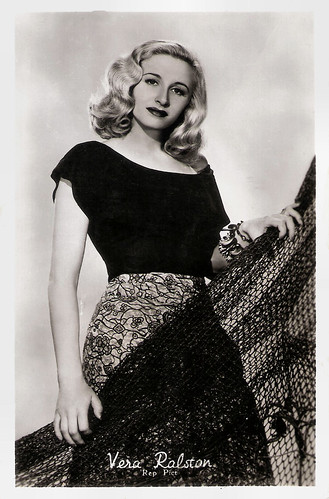 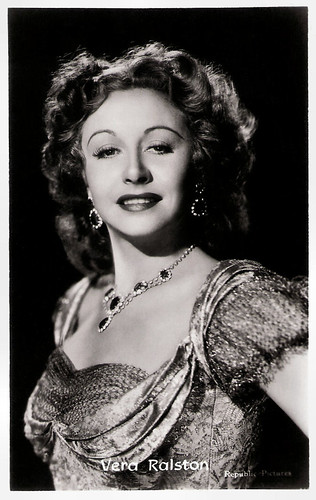 Věra Helena Hrubá was born in Prague, Czechoslovakia (now Czech Republic) in 1923. Her age and date of birth were often uncertain; various sources gave her birth year as 1919, 1920, 1921, and 1923. Her accurate date of birth is 12 July 1923, as verified by the social security death index as well as her burial records at Santa Barbara Cemetery, Santa Barbara, California.

Her father, Rudolf Hruba, was a wealthy jeweller and president of the Jewels Association. Her brother later became a film producer in the United States under the name of Rudy Ralston. Vera studied ballet as a child and turned to ice skating when she was 10 years old.

In 1937, she toured the United States in ice revues. RKO offered her a screen test, but she refused because she was getting married. Her engagement to a half-Jewish boy dissolved when his parents did not consent to his wedding a Catholic.

Vera Hruba escaped her native Czechoslovakia in March 1939 on the last plane out before the Nazis closed the borders in Czechoslovakia. Via Paris, she and her mother travelled by ship to New York. Later her brother and father followed them. In 1946 she would become an American citizen.

Hubra became part of the 'Ice Vanities' and toured America. When the show came to California, Republic Pictures representatives saw the show and loved it. Republic put everyone under contract and made Ice-Capades (Joseph Santley, 1941) which was so successful they made a follow-up, Ice-Capades Revue (Bernard Vorhaus, 1942), the following year. 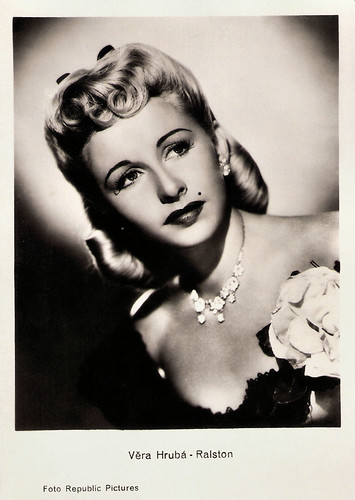 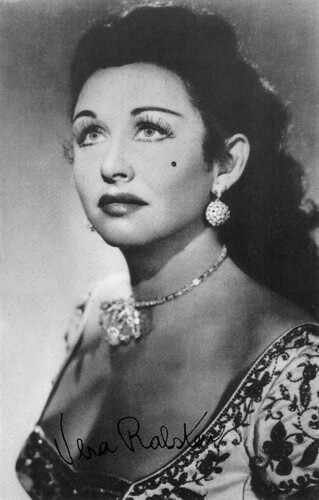 Vera Hruba moved to Hollywood with her mother and signed a long-term contract in 1943 with Republic Pictures. She chooses Ralston, from the breakfast cereal, as her screen name. She was advertised by Republic as skating “out of Czechoslovakia into the hearts of America.” During her early film career she was known as Vera Hrubá Ralston and later as Vera Ralston.

Ralston’s films weren’t just skating musical comedies. Her first film under the new contract was the Sci-Fi thriller The Lady and the Monster (George Sherman, 1944) with Erich von Stroheim and Richard Arlen. It was the first version of Curt Siodmak's often filmed Science Fiction novel 'Donovan's Brain', about the living brain of millionaire Donovan who possesses the mind of scientist Richard Arlen to clear his illegitimate son who has been wrongly convicted of murder. Critics said Ralston was wooden and complained of her Czech accent.

Late 1947, Republic studio head Herbert Yates leaves his wife and four adult children to be with her. He's 67; she's 27. Her father doesn't approve of the relationship and returns to Prague. In 1952 Ralston married Yates. He used his position to obtain roles for Ralston, such as in A Perilous Journey (R.G. Springsteen, 1953) with David Brian, and Fair Wind to Java (Joseph Kane, 1953) with Fred MacMurray. In 1956, he was sued by two studio shareholders for using company assets to promote his wife and having given her brother producer status at a salary far beyond industry worth.

Vera Ralston retired from films in 1958, the year Yates was deposed as head of the studio. Reportedly only 2 of her 20 films had made money. The 85-year-old Herbert Yates died in 1966, leaving his $8 million estate to Ralston (other sources say the estate was $10 million or more and she inherited half of it). She suffered a nervous breakdown shortly thereafter, then remarried in 1973 to Charles L. Alva, a Santa Barbara businessman, and lived quietly in southern California.

Vera Ralston died in 2003, in Santa Barbara, California, after a long battle with cancer. She was 79. The authors of the book 'The Golden Turkey Awards' nominated her for the dubious honour of 'The Worst Actress of All Time', along with Candice Bergen and Mamie Van Doren. They all lost to Raquel Welch. 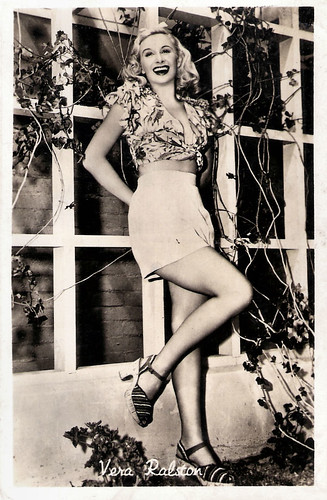