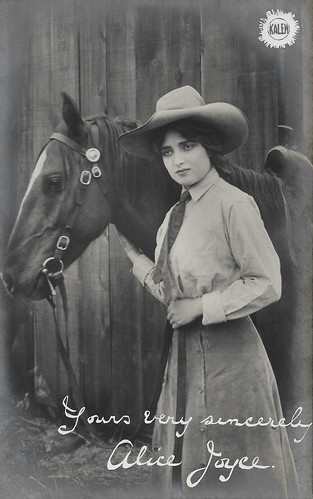 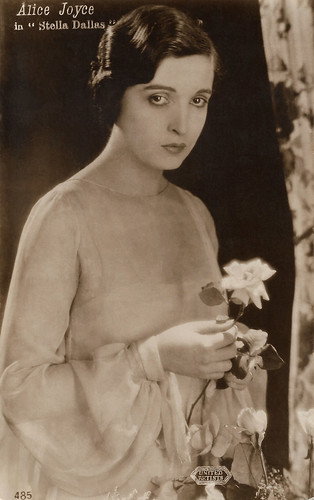 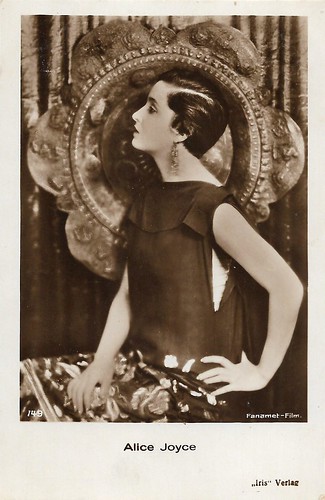 Well-behaved ladies of the better society

Alice Joyce was born in Kansas City, Missouri, in 1890. Her parents were John Edward Joyce, a smelter worker, and Vallie Olive McIntyre Joyce, a seamstress. She had a younger brother, Francis 'Frank' Joyce, who later became an entertainment manager.

She began her career at 13 as a telephone operator, modeling on the side in the summer when business was slow. Due to her striking looks, she became one of the top models for commercial artists in Kansas City.

She obtained a try-out at Biograph Pictures but was rejected by D.W. Griffith. It was director Sidney Olcott at the Kalem Company in New York City who gave Alice Joyce her first chance, casting her in his  production, The Deacon's Daughter (Sidney Olcott, 1910).

Joyce quickly rose to become one of the biggest stars of Kalem Studios. Jon C. Hopwood at IMDb: "Kalem was one of the first companies to break the movie industry practice of not crediting its performers, and it began to feature Alice in its publicity and advertising. By April 1911 she was already being cited by name in reviews, and she soon became well-known. Returning to New York in the summer of 1912, Joyce was now a popular screen favorite and Kalem's biggest star. She even appeared as herself in Rube Marquard Wins (1912), a two-reeler featuring the future baseball Hall of Famer, who had set a major-league record with 19 straight wins that year for the pennant-winning New York Giants."

Alice played mostly well-behaved ladies of the better society in melodramas, comedies and occasionally crime stories. She was eventually sent to work under director Kenean Buel on the West Coast after Kalem acquired the old Essanay Studios property in East Hollywood in October 1913.

The leading man for many of her films in this period was Tom Moore, one of a famous family of Irish actors. Eventually, Tom and Alice fell in love and were married in 1914, while on location for The Girl and the Stowaway (Kenean Buel, 1914) in Jacksonville, Florida.

In the middle of 1914, Kalem launched the two-reel 'Alice Joyce Series', releasing a new film of hers every two weeks. The studio transferred Moore to another film unit to co-star with Marguerite Courtot, while Guy Coombs was made Joyce's new leading man.

With the merger of Kalem with Vitagraph in 1916, the popularity of Joyce increased. Feature films had pushed one- and two-reelers out of the marketplace as nickelodeons were replaced by converted vaudeville houses and movie cathedrals. Joyce was cast into two of J. Stuart Blackton's films: Whom the Gods Destroy (1916), a near-contemporaneous tale of the Easter Rebellion in Ireland, and the patriotic potboiler Womanhood, the Glory of the Nation (1917).

Her biggest hit was Within the Law (William P.S. Earle, 1917), the film version of Bayard Veiller's vastly popular stage melodrama, in which she played Mary Turner, a young shopgirl unjustly convicted of a crime and sentenced to prison. There she studies the law and comes to the conclusion that there are many ways to break the law. 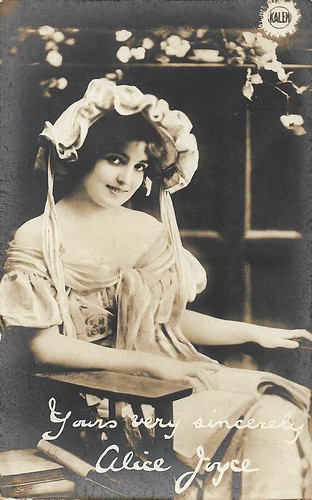 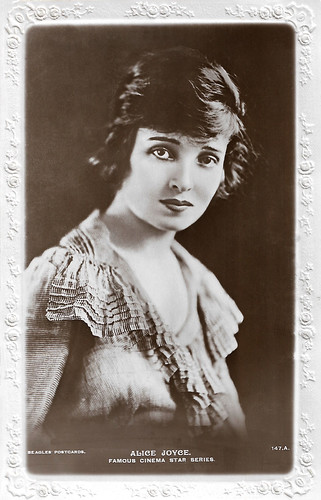 British postcard in the Famous Cinema Star Series by Beagles & Co, Ltd, no. 147.A. 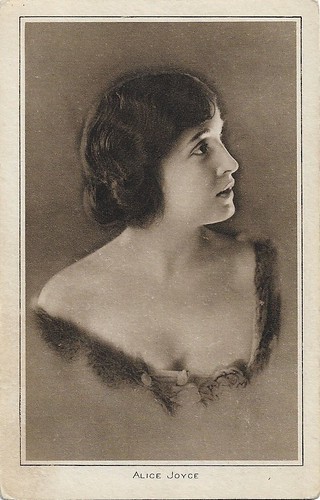 British postcard in the "Pictures" Portrait Gallery, no. 125. 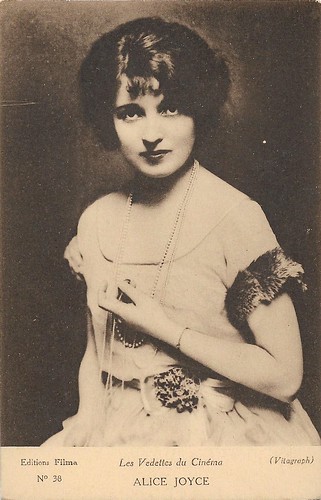 A well-endowed contract with First National

Alice Joyce was known as 'The Madonna of the Screen' for her striking features and presence. Until 1921, Joyce played mostly naive ingénue roles for Vitagraph, but slowly as she started to work independently, she also took on some more mature roles.  She appeared in The Green Goddess (Sidney Olcott, 1923) opposite the great stage actor George Arliss.

In 1924 she acted opposite Clive Brook in the British production The Passionate Adventure (Graham Cutts, 1924). The screenplay was co-written by a young filmmaker named Alfred Hitchcock, who also served as art director.

1925 was one of her most productive years. She played opposite Percy Marmont in Frank Borzage's Daddy's Gone A-Hunting and was Stella's rival Helen Morrison in Henry King's Stella Dallas.

Five months later she played Clara Bow's mother in Dancing Mothers (Herbert Brenon, 1926). She played a woman who is denied any pleasure in life by her heartless husband and thoughtless daughter. It was one of Joyce greatest successes. She also played a princess opposite W.C. Fields in the comedy So's Your Old Man (Gregory La Cava, 1926).

In 1927 Joyce signed a well-endowed contract with First National, where she received a few substantial film roles, as in The Squall (Alexander Korda, 1929), starring Myrna Loy and Loretta Young, and based on the 1926 play The Squall by Jean Bart.

Joyce made a smooth transition from silent film to sound film and co-acted with George Arliss in The Green Goddess (Alfred E. Green, 1930), the remake of a film in which both stars had had a success in 1923. Arliss was nominated for an Academy Award for Best Actor in a Leading Role for his performance.

In 1930, she also made her last film, Song o' My Heart (Frank Borzage, 1930), after which she and ex-husband Tom Moore worked a late vaudeville circuit for a time. A lengthy heart disease (Louise Brooks claimed that it was an alcohol problem) forced her into private life. She declared voluntary bankruptcy in 1933.

Finally she married director Clarence Brown in 1933, a six-time Oscar nominee who was one of the studio's top directors. Joyce was active in San Fernando Valley women's organisations. She did book reviews and made sketches for friends. In 1946, after her divorce from Brown, Joyce was seriously injured in a traffic accident. Clarence Brown remained with her for nine hours and paid her medical bills.

The actress was ill for several years before her death from a blood and heart ailment at Hollywood Presbyterian Hospital. Alice Joyce died in 1955 at the age of 65. Joyce was interred next to her mother, Vallie, in the San Fernando Mission Cemetery in Mission Hills, Los Angeles, California.

Next to Mary Pickford and Lillian Gish, she was one of the few stars who was a star from the beginnings of commercial cinema, when it was still called Nickelodeon, right up to the sound film days. 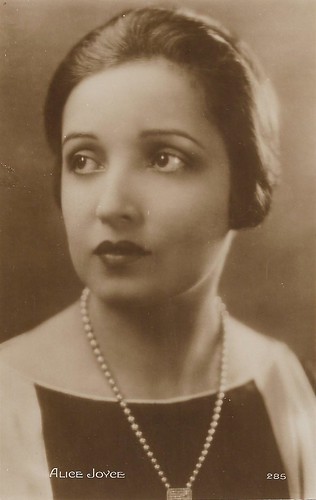 French postcard by Editions Cinémagazine, no. 286. 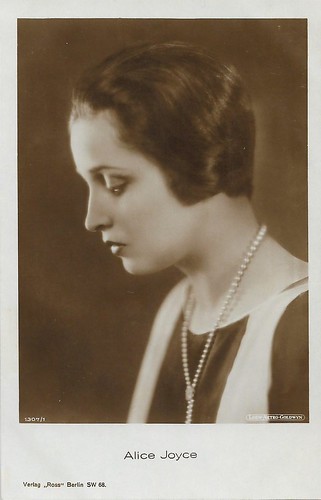 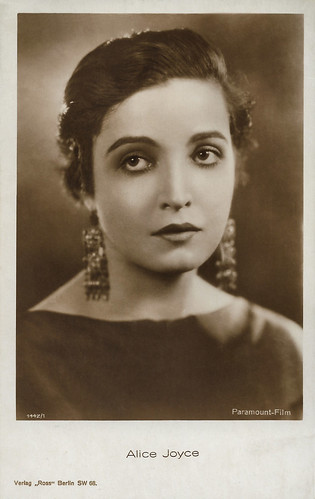 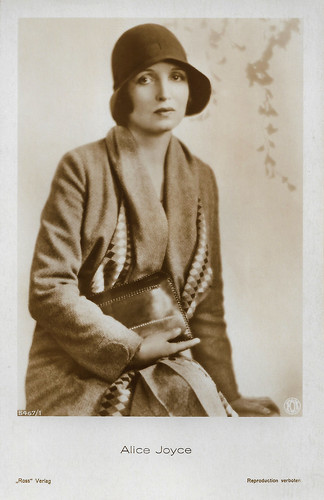