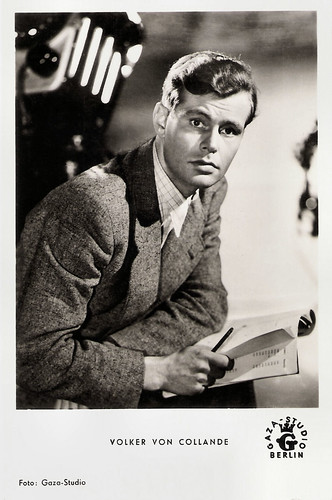 
Volker Hubertus Valentin Maria von Mitschke-Collande was born in Dresden in 1913 in a Silesian noble family. He was the son of the painter Constantin von Mitschke-Collande and his first wife Hilde Wiecke, whose father Paul Wiecke was an actor and theatre director in Dresden. His younger sister Gisela von Collande became a well known actress.

Collande started his career as a bricklayer apprentice and then completed an architecture degree at the State School Dresden. Only then did he take acting lessons and he made his stage debut in 1933 at the Deutsches Theater Berlin as Valentin in 'Faust'. In the same year he started to work as an assistant director and radio announcer in Stuttgart.

He became a member of the NSDAP, the Nazi party. From 1933 on, he performed in over 30 feature films. He played supporting parts in the Karl Valentin comedy Donner, Blitz und Sonnenschein/Thunder, Lightning and Sunshine (Erich Engels, 1936), and the drama Waldwinter/Winter in the Woods (Fritz Peter Buch, 1936) starring Viktor Staal and Hansi Knoteck.

He directed his first film in 1942: the romantic comedy Zwei in einer großen Stadt/Two in a Big City (Volker von Collande, 1942) starring Claude Farell, Karl John and Marianne Simson. A German soldier on leave in Berlin goes looking for his pen pal who he has never met called Gisela. He meets instead a woman with the same name and falls in love with her.

A hit was his next film, the comedy Das Bad auf der Tenne/The Bath in the Barn (Volker von Collande, 1943) starring Will Dohm and Heli Finkenzeller. In the meanwhile, he worked as a stage actor in Berlin, and as a director of radio plays. 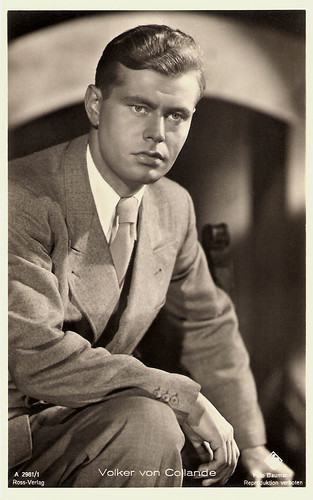 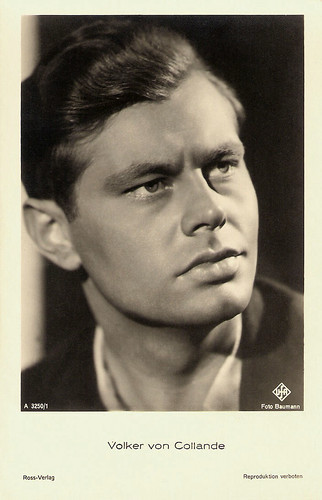 
From 1947 on, Victor von Collande worked for the theatre in Saarbrücken and during the 1950s he performed at the Deutsches Schauspielhaus in Hamburg.

He continued to work in the cinema. He appeared in such comedies as Absender unbekannt/Unknown Sender (Ákos Ráthonyi, 1950) starring Henny Porten. Among the films he directed were such light entertainment films as Ich warte auf dich/I'm Waiting for You (Volker von Collande, 1952, with Hanna Rucker and Joachim Brennecke.

J. Steed at IMDb: "Although in principal it did not matter much who sat in the director's chair, this part with its already weaker story (than that of part 1) is not helped much by Volker von Collande's uninterested direction. It is a good thing that Fritz Arno Wagner was behind the camera, although he could not prevent that when finally something resembling a plot is starting (with the arrival of Hans Nielsen as the financial saver), the story telling becomes untidy."

Von Collande was married four times. From 1936 till 1938 he was married to actress Ingeborg Hertel. In 1939, he married the dance teacher Gisela Hartwig gen. von Naso. They divorced in 1942. In 1944, he married the ballet master Isabella Vernici Modler, which marriage also ended in a divorce in 1950. Finally, he wed in a fourth marriage the voice therapist Irene Nathusius. Their daughter Nora von Collande became an actress and author.

Volker von Collande passed away in Hannover in 1990. He was buried at the Ohlsdorf cemetery. 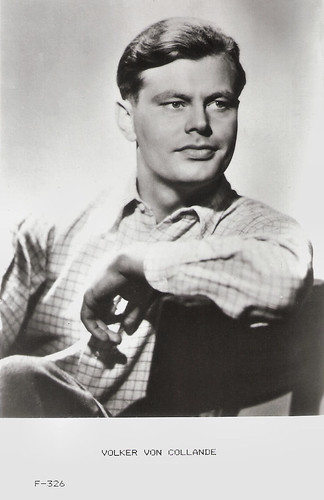 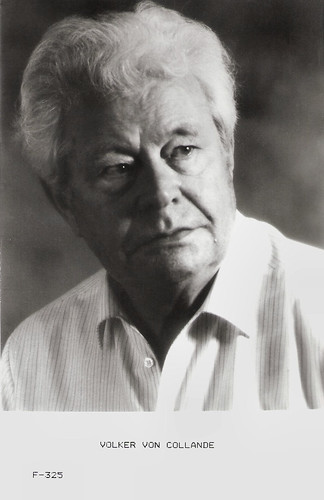