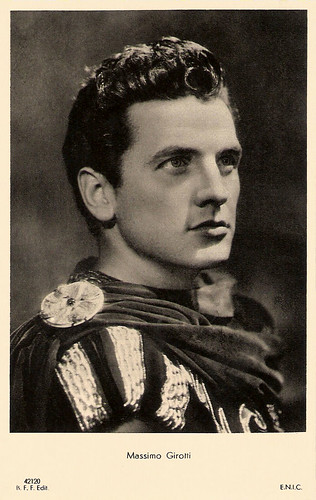 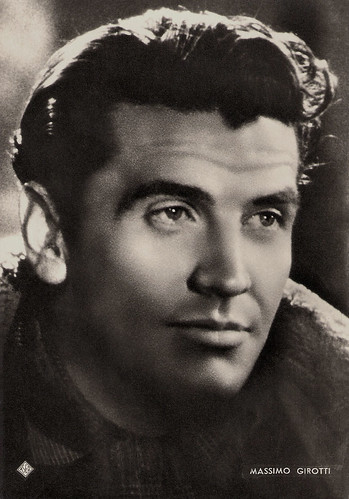 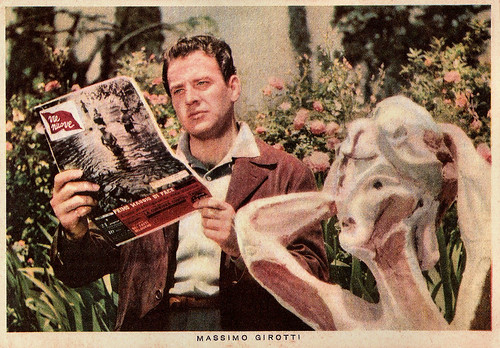 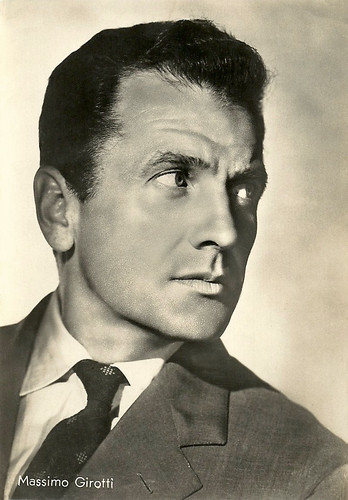 
Massimo Girotti was born in Mogliano, Italy in 1918.

He was an engineering student, who thanks to his athletic physique - he was a champion swimmer and polo player - was noted by writer Mario Soldati. Soldati offered him a small part in his first feature as a director, Dora Nelson (Mario Soldati, 1940) featuring Assia Noris.

He also played a small part in Tosca/The Story of Tosca (Jean Renoir, Carl Koch, 1941) with Imperio Argentina, for which Luchino Visconti was an assistant-director.

Girotti had a bigger part in Alessandro Blasetti's mythological extravaganza La corona di ferro/The Iron Crown (1941). He took the double role of the fairytale King, killed in the prologue, and his Tarzan-like son Arminio, who has been nurtured by lions in the forest. Blasetti's film made him a popular star.

Roberto Rossellini cast him in his next film, the war drama Un pilota ritorna/A Pilot Returns (Roberto Rossellini, 1941), written by Benito Mussolini's son Vittorio Mussolini, who was then head of the Italian film industry. In this film Girotti plays a pilot shot down over Greece and captured by the British. After a love affair with the daughter of an Italian doctor, he manages to escape and return.

In 1943 came a turning point in his career when Luchino Visconti cast him opposite the torrid Clara Calamai in Ossessione/Obsession (Luchino Visconti, 1943), the unauthorised Italian version of James M. Cain's steamy novel The Postman Always Rings Twice.

In Ossessione the camera's eye on Girotti's Gino shows Visconti's predilection for the actor. In his published memoirs Girotti confessed he felt embarassed about Visconti's amorous attention for him, not very clear to viewers then but quite clear to us now. Although Girotti was happily married for most of his life, his relationship with Visconti was reportedly not completely platonic. Girotti would go on to cooperate several more times with Visconti, both on stage and in films. The combined sexiness of Girotti and Calamai in Ossesione was provocative for the times - as was the daring earthiness of the story.

The film marked the birth of what was later known as Neo-realism. Robert Firsching writes at AllMovie: "the movie began to feature some of neorealism's defining characteristics: above all, an emphasis on outdoor shooting and natural light and a relentless focus on the lives of the poor. Ossessione caused a sensation not just because of its lurid subject matter but also because Visconti's realist style makes you practically feel the heat and dirt and sweat of the film's environment." When the fascists saw the film, it was hurriedly withdrawn. 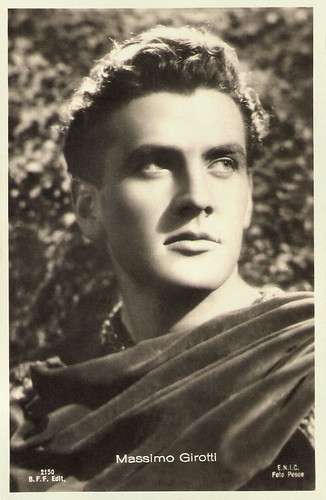 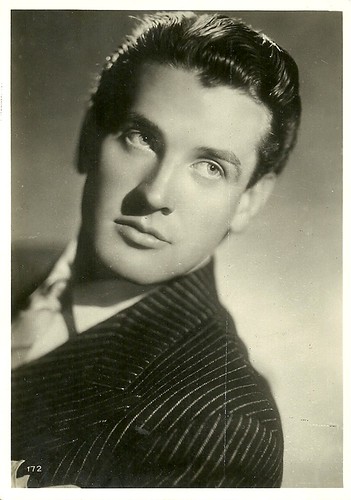 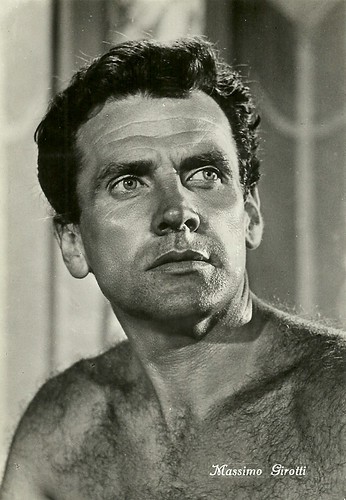 Italian postcard by Vetta Traldi, Milano, no. 100. Postcard probably for the epic Fabiola (Alessandro Blasetti, 1949), in which Girotti played (Saint) Sebastian, the Head of the Pretorian Guard, who dies as a Christian martyr. Could also be for Spartaco (Riccardo Freda, 1953). 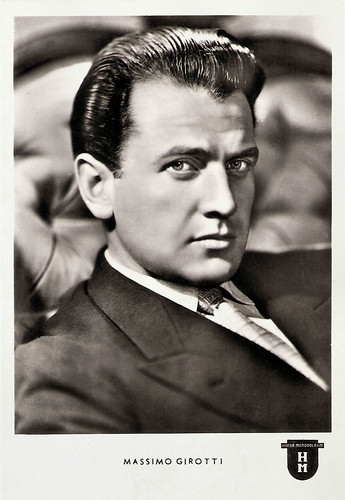 
During the German occupation, Massimo Girotti played in La porta del cielo/The Gate of Heaven (Vittorio De Sica, 1944) with Marina Berti, a film funded with Catholic money and also set in a Catholic environment. The film was released after the liberation, in the autumn of 1944.

He also starred opposite Lucia Bosé in the modernist drama Cronaca di un amore/Story of a Love Affair (Michelangelo Antonioni, 1950). Antonioni's feature film debut is the story of two lovers who plot to kill her husband, set among the Milanese rich.

Michael Hastings reviews the film at AllMovie: "Michelangelo Antonioni's first narrative feature is a stark, minimal interpersonal drama that would establish many of the themes and techniques that would recur in his work for the rest of his career. (...) Filled with stark, empty compositions, unpredictable camera movements, and static, self-obsessed characters, Story of a Love Affair would mark Antonioni as a maverick among the prevailing neorealists of the post-war Italian film community."

From the early 1950s on, Girotti also played in various epic films, such as Fabiola (Alessandro Blasetti, 1949) with Michèle Morgan, as slave-turned-leader Spartacus in Spartaco/Sins of Rome (Riccardo Freda, 1953), and Romolo e Remo/Duel of the Titans (Sergio Corbucci, 1961) featuring Steve Reeves.

In 1954 he returned to Visconti to play in Senso/Livia (Luchino Visconti, 1954), giving perhaps the finest performance of his career as the noble and passionate patriot Ussoni who is defeated by the Austrians. 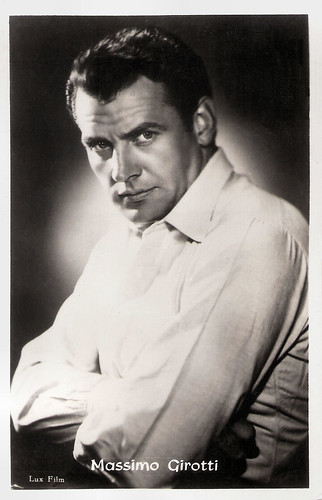 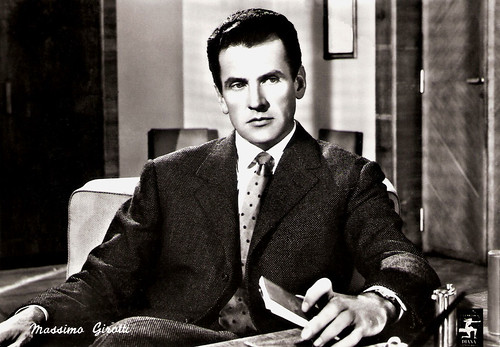 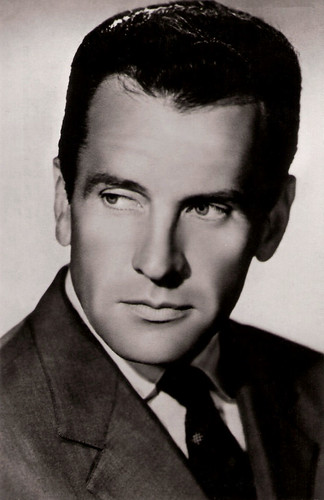 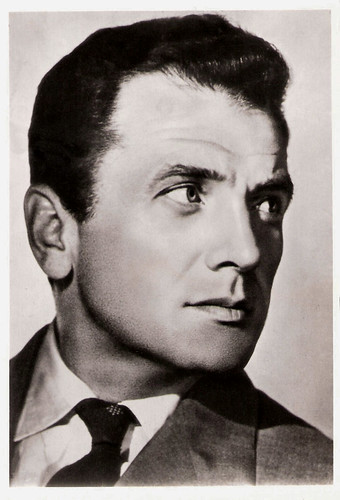 
In his later career Massimo Girotti appeared in a large number of mainly Italian films for directors such as Carlo Lizzani, Mauro Bolognini, Vittorio Cottafavi, and Alberto Lattuada.

As Gary Brumburgh writes at IMDb: "in the 60s, however, Girotti was reduced to support roles in swashbuckling adventure and badly-dubbed sand-and-spear spectacles".

His most memorable roles in this decade were the bourgeois industrialist in Pier Paolo Pasolini's Teorema/Theorem (1968), who, like the rest of his family, is seduced by Terence Stamp, and at the end strips in a train station and walks into the desert, and King Kresus/Creonte opposite Maria Callas in Medea (Pier Paolo Pasolini, 1970).

Massimo Girotti's last role was a mysterious old wanderer - an old Gino? - in La finestra di fronte/Facing Windows (Ferzan Ozpetek, 2003). He proves to be a Jewish homosexual baker who is tormented his whole life by sacrificing his lover to save the Jews from the Roman ghetto.

Massimo Girotti died of a heart attack in Rome, in 2003, just after finishing the film. He was 84. 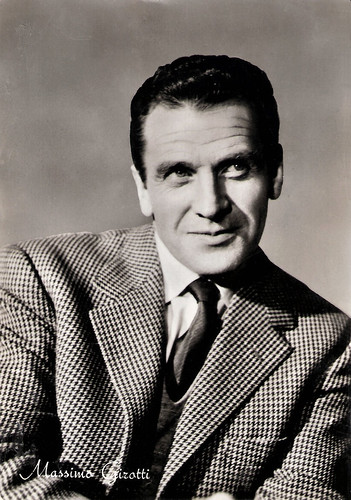