Laura La Plante (1904–1996) was an American actress, best known for such silent films as Smouldering Fires (Clarence Brown, 1925), Skinner's Dress Suit (William Seiter, 1926), and The Cat and the Canary (Paul Leni, 1927) with Creighton Hale. In the 1920s she acted in over 60 films, mostly for Universal, including the two part-talkies The Love Trap (William Wyler, 1929) and Showboat (Harry A. Pollard, 1929). During this period she was Universal's most popular star, and almost always enjoyed top billing. 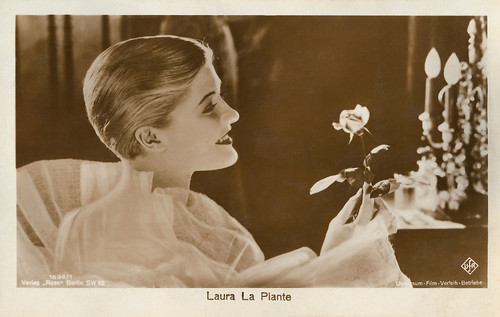 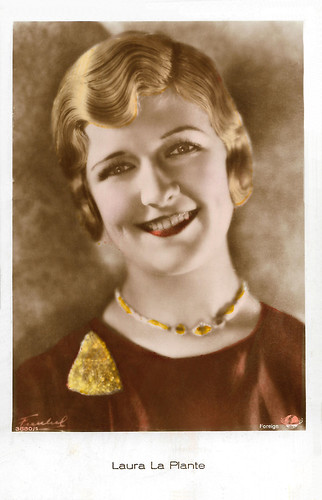 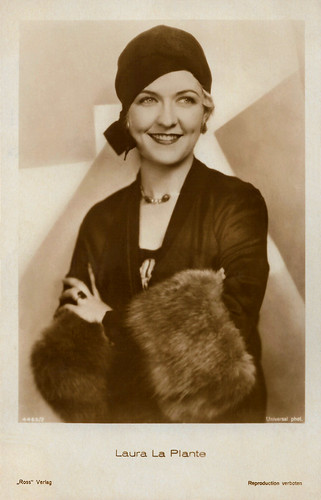 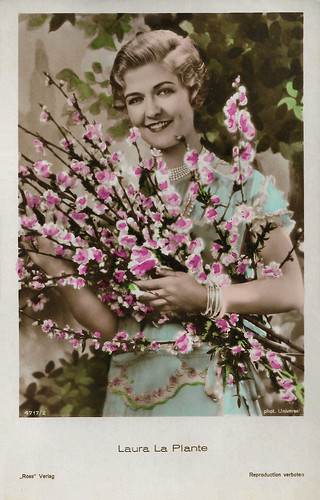 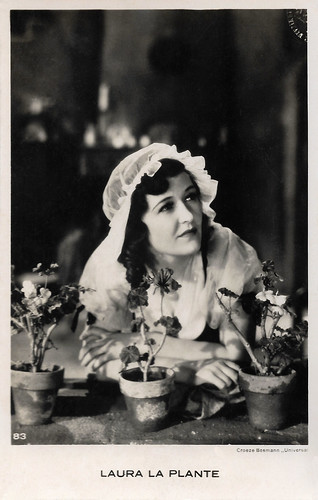 Laura was 15 years old when she was discovered by film producer Al Christie and entered films as a Christie Comedy Bathing Beauty.

By 1921, she had played a number of roles including a Tom Mix Western called The Big Town Round-Up (Lynn Reynolds, 1921) for Fox and The Old Swimmin' Hole (Joseph De Grasse, 1921) opposite Charles Ray for First National.

Laura, now 17, next signed with Universal, where she appeared in shorts, serials and many supporting roles. Over the next few years, she would become one of the leading stars at Universal and acted in in dramas, mysteries and comedies. 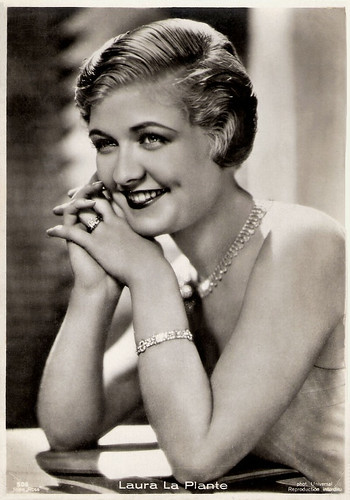 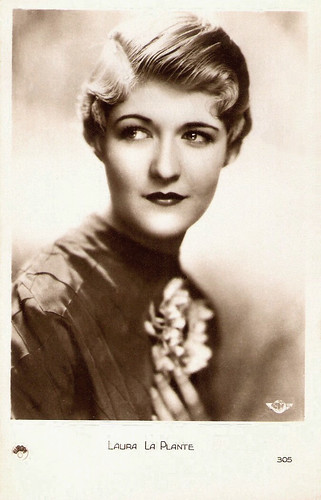 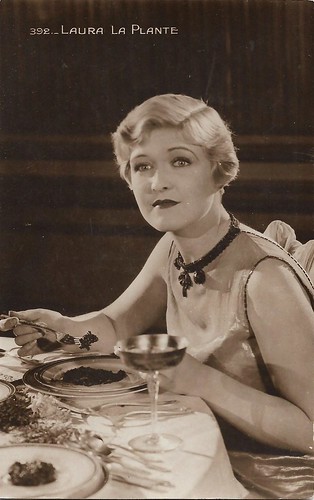 French postcard by Editions Cinémagazine, no. 392. 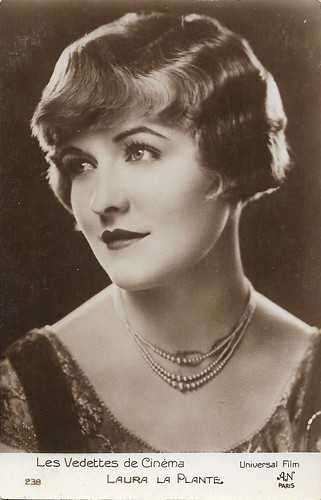 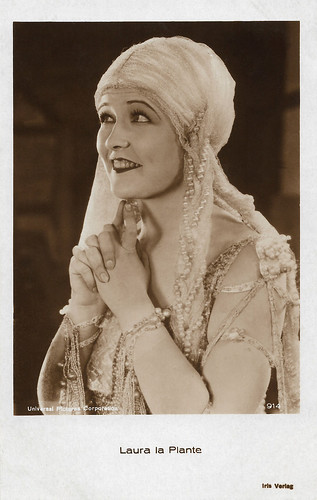 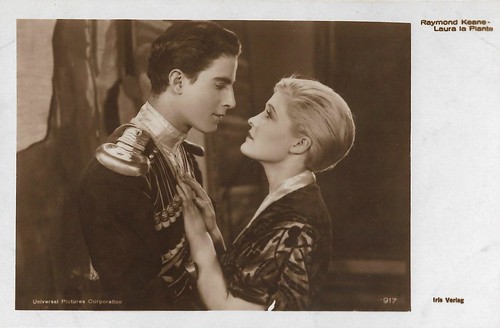 One of the most stylish films of the silent era

Laura La Plante married in 1926 director William A. Seiter, who directed her in the successful comedy Skinner's Dress Suit (William A. Seiter, 1926), again opposite Reginald Denny. John Howard Reid at IMDb: "I enjoyed the way the script cleverly turned the tables, and I'm not at all surprised the film was so popular on first release."

Another hit was the mystery The Cat and the Canary (1927), directed by German director Paul Leni. Relatives of an eccentric millionaire gather in his spooky mansion on the 20th anniversary of his death for the reading of his will. GFT Biloxi at IMDb: "In term of cinematography, CAT is a remarkably imaginative film, using a series of over-lapping images, close-ups, and dissolves to astonishing effect. In a visual sense it is easily one of the most stylish films of the silent era."

When sound came to Universal, La Plante was one of the silent film stars who made the transition. She played a leading role in the part-sound film Show Boat (Harry A. Pollard, 1929) opposite Joseph Schildkraut, and adapted from . Although it was an adaptation of the novel of the same name by Edna Ferber and not of the famous musical also adapted from the 1926 novel, some songs from the play were tossed into the film as box-office insurance. La Plante did not actually sing in the film. To her surprise her singing was dubbed by Eva Olivetti, one of the first instances in which this was done in a film.

La Plante made her first all-talking picture with Hold Your Man (Emmett J. Flynn, 1929). La Plante was a natural and appealing presence in early talkies but the huge wave of new stars in those years overshadowed her. By 1930, she decided that she had enough and left Universal, which terminated her contract. Her last appearance for Universal was in the Technicolor musical King of Jazz (John Murray Anderson, 1930).

She appeared for Warner Bros in God's Gift to Women (Michael Curtiz, 1931) co-starring Frank Fay and Joan Blondell, and for Columbia in the drama Arizona (George B. Seitz, 1931), co-starring alongside a young John Wayne.

Laura La Plante went to England, where she worked at Warner Brother's Teddington Studios. The company had faced criticism for the low quality of its 'quota quickies', and her arrival coincided with an attempt to make more expensive productions. She starred in Man of the Moment (Monty Banks, 1935), with Douglas Fairbanks, Jr. She returned to Hollywood in 1935, where she again retired from the screen.

She made only two later films. In 1954 she appeared as a contestant on the TV show You Bet Your Life under the name Laura Asher. Host Groucho Marx was told he might recognise her, and he realised she was Laura La Plante within minutes of being introduced. Her final film was Spring Reunion (Robert Pirosh, 1957) starring Dana Andrews.

She was extremely private and didn't care to speak about her Hollywood career. When David Gill and his crew arrived at her Rancho Mirage home in 1977 to interview her husband Irving Asher for his documentary series, she hid in her kitchen pleading not to be interviewed.

La Plante was married twice. Her first husband was director William A. Seiter (1926-1934). After their divorce, she married producer Irving Asher with whom she had two children: Tony and Jill. Irving passed away in 1985.

In 1996, Laura La Plante died of Alzheimer's disease in Woodland Hills, Los Angeles, California, USA, at the age of 91. La Plante was cremated by Valhalla Memorial Park Cemetery in North Hollywood, California with her ashes scattered at sea. 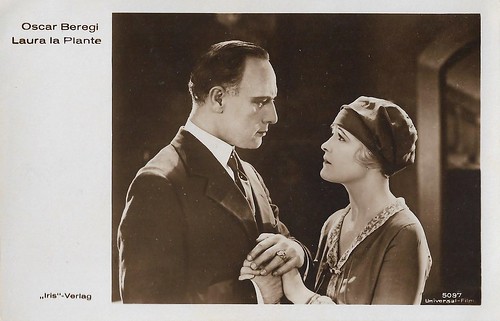 Austrian postcard by Iris-Verlag, no. 5097. Photo: Universal-Film. Laura La Plante and Oscar Beregi in Butterflies in the Rain (Edward Sloman, 1926). 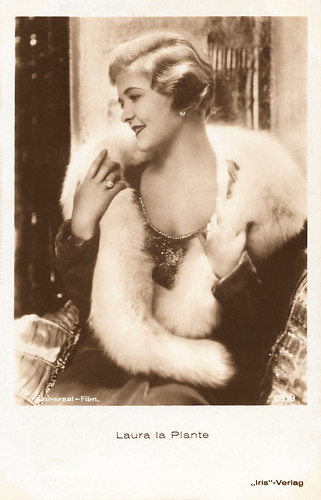 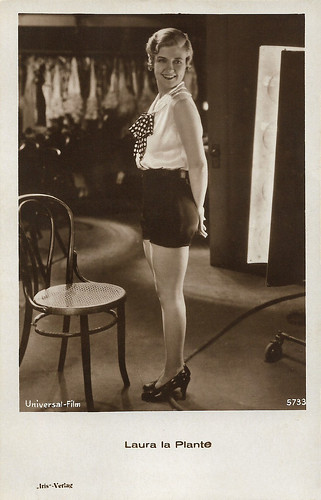 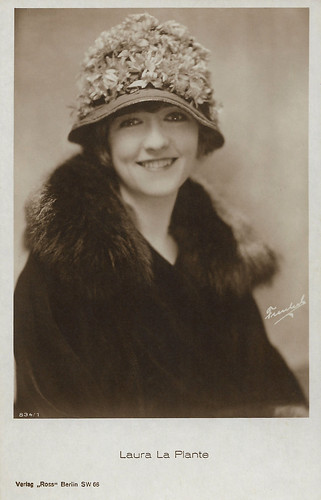 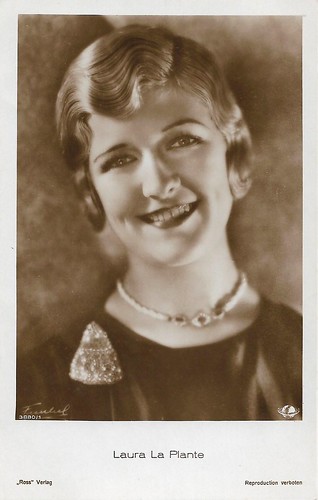 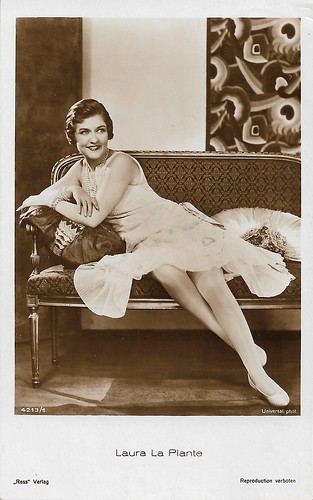 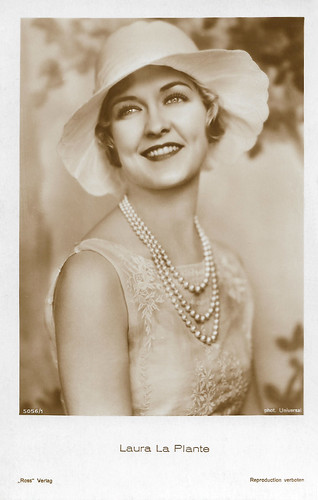