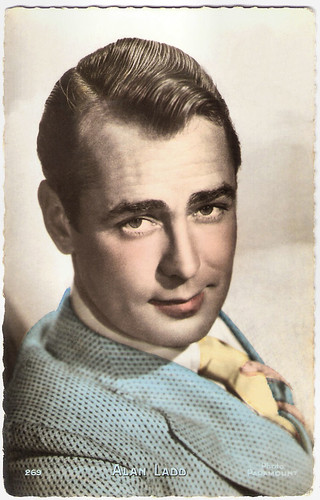 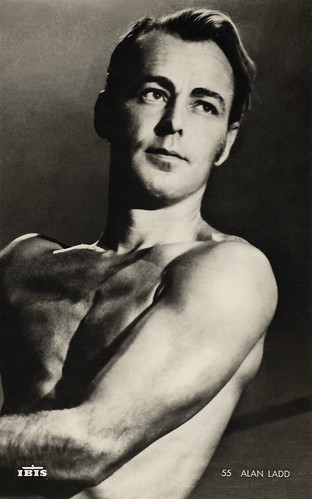 Vintage postcard by IBIS, no. 55. Publicity still for Two Years Before the Mast (John Farrow, 1946). 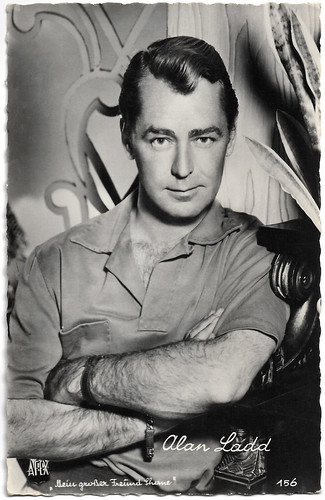 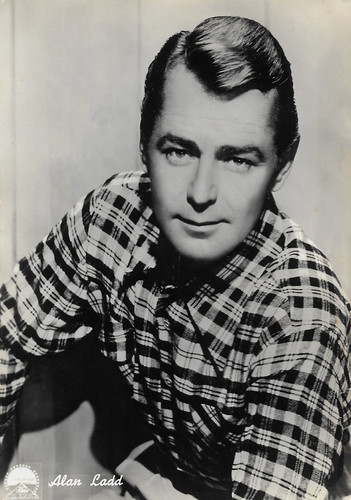 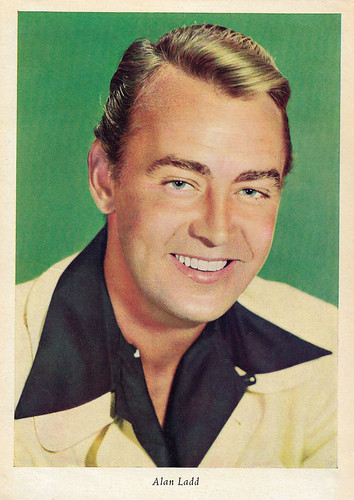 Psychotic hitman with a conscience

Alan Walbridge Ladd was born in Hot Springs, Arkansas, USA in 1913. His mother, Ina Raleigh (also known as Selina Rowley), had emigrated from England at age 19, and his accountant father, Alan Ladd, died when his son was only four.

At age five, Alan burned his apartment playing with matches, and his mother moved them to Oklahoma City, where she married Jim Beavers, a housepainter. Alan was malnourished, undersized and nicknamed 'Tiny', and an economic downturn led to Ladd's family moving to California. Alan picked fruit, delivered papers, and swept stores.

In high school he discovered track and swimming. By 1931 he was training for the 1932 Olympics, but an injury put an end to those plans. His diving skills led to his appearance in an aquatic show, 'Marinella' in July 1933. He also worked as a studio carpenter (as did his stepfather) at FBO.

Ladd's performance in his high school show of 'The Mikado' was seen by a talent scout. In August 1933 Ladd was one of a group of young 'discoveries' signed to a long-term contract with Universal Pictures. The contract had options which could go for seven years, but they were all in the studio's favor. Ladd appeared unbilled in a film, Once in a Lifetime (1933), but the studio eventually decided Ladd was too blond and too short and dropped him after six months.

He opened a hamburger stand called Tiny's Patio, but it was not a success. In another attempt to break into the film industry, Ladd went to work at Warner Bros. as a grip, and ended up staying two years. He was injured falling off a scaffold and decided to quit.

Alan married his friend Marjorie Jane 'Midge' Harrold in 1936, but couldn't afford her, so they lived apart. In 1937, they shared a friend's apartment. They had a son, Alan Ladd Jr., and his destitute alcoholic mother moved in with them, following the breakup of a relationship. A few months later, she asked Ladd for some money to buy something at a local store. Ladd gave her the money, thinking it was for alcohol. She purchased some arsenic-based ant paste from a grocer and committed suicide by drinking it in the back seat of Ladd's car.

Ladd worked hard at radio. Ladd's rich, deep voice was ideal for that medium and in 1936 he ended up being signed by station KFWB as its sole radio actor. He stayed for three years at KFWB, working as many as twenty shows a week.

There talent scout and former actress Sue Carol discovered him early in 1939. She enthusiastically promoted her new handsome client in films as well as radio. Ladd's first notable part under Carol's management was the film Rulers of the Sea (Frank Lloyd, 1939), starring Douglas Fairbanks Jr. and Margaret Lockwood. Ladd played a character named 'Colin Farrell' at $250 a week. He also received attention for a small part in Hitler – Beast of Berlin (Sam Newfield, 1939), one of the most popular 'hiss and boo' films of the World War II era.

He appeared in a string of bit parts in B-pictures - and an unbilled part as a newspaper reporter in Orson Welles' classic Citizen Kane (1941). Ladd's career gained extra momentum when he was cast in a featured role in a wartime drama made at RKO, Joan of Paris (Robert Stevenson, 1942) with Michèle Morgan. It was only a small part but it involved a touching death scene which brought him attention within the industry.

Late in 1941, he got his big break when he tested for This Gun for Hire (Frank Tuttle, 1942) based on the novel by Graham Greene. Director Frank Tuttle was struggling to find a new actor to play the role of 'Raven', a psychotic hitman with a conscience. Ladd's ausition was successful and Paramount signed him to a long-term contract. His fourth-billed role as psychotic hitman Raven made him a star. 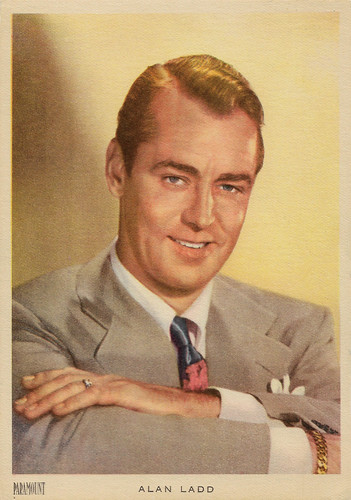 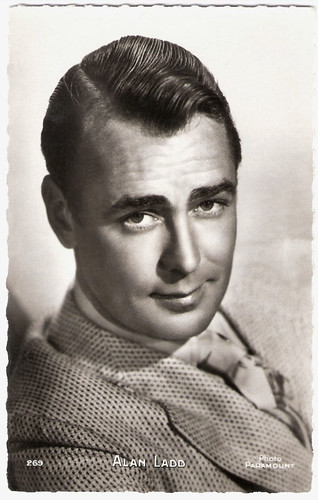 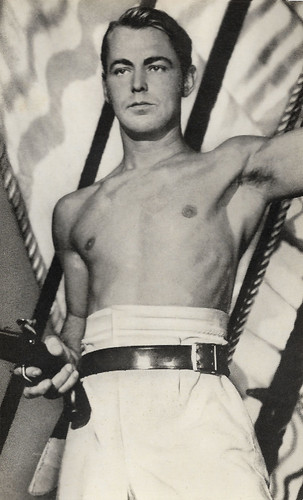 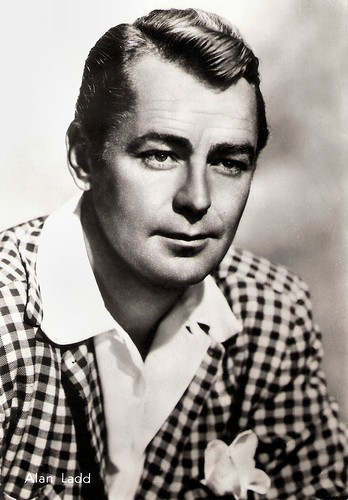 Italian postcard by Bromostampa, Milano, no. 82. 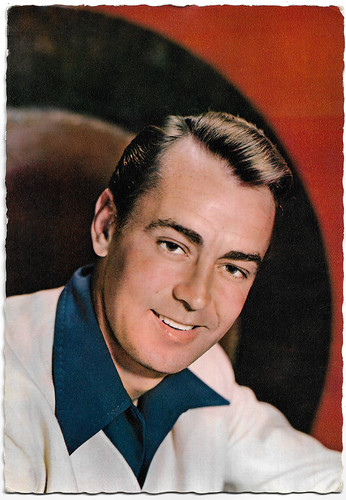 Alan Ladd and his co-star in This Gun for Hire, Veronica Lake, then made The Glass Key (Stuart Heisler, 1942). The adaptation of Dashiell Hammett's story was another hit. The New York Times reported that Alan Ladd "in the brief period of a year and with only four starring pictures to his credit... had built up a following unmatched in film history since Rudolph Valentino skyrocketed to fame."

Ladd was drafted in January 1943 and discharged in November with an ulcer and double hernia. He went on to star in films. His cool, unsmiling tough-guys proved popular with wartime audiences, and Alan Ladd became one of the top box office stars of the decade.

With Veronica Lake, he made seven films together. These included the Film Noir The Blue Dahlia (George Marshall 1946), and Saigon (Leslie Fenton, 1948). Then he made his first Western since he became a star and first film in colour, Whispering Smith (Leslie Fenton, 1948). In an adaptation of Scott Fitzgerald's The Great Gatsby (Elliott Nugent, 1949), Ladd had the featured role of Jay Gatsby.

Four years later he appeared in what many regard as his greatest role, Shane (George Stevens, 1953) opposite Jean Arthur and Van Heflin. The film was nominated for five Academy Awards, including Best Picture. It led to Ladd being voted one of the ten most popular stars in the country in 1953.

From then on he was performing in lucrative but unrewarding films. By the end of the 1950s liquor and a string of so-so films had taken their toll. In November 1962 he was found unconscious lying in a pool of blood with a bullet wound near his heart. At the time, Ladd said he thought he heard a prowler, grabbed a gun, and tripped over, accidentally shooting himself. This was accepted by the police investigating.

In 1963 Ladd's career looked set to make a comeback when he filmed a supporting role in The Carpetbaggers (Edward Dmytryk, 1964) with Carroll Baker, which became one of the most popular films of the year. He would not live to see its release.

In January 1964, Alan Ladd was found dead, apparently due to an accidental combination of alcohol and sedatives. Ladd was only 50. He was married twice. After his divorce from Marjorie Jane Harrold in 1941, he married former film actress Sue Carol in 1942, who was also his agent and manager. The couple had two children, actors Alana Ladd and David Ladd. He was the grandfather of actress Jordan Ladd. His first son, Alan Ladd, Jr., is a film executive and producer and founder of the Ladd Company. David Ladd, who co-starred with his father as a child in The Proud Rebel, was married to Charlie's Angels star Cheryl Ladd (née Stoppelmoor), from 1973 till 1980. 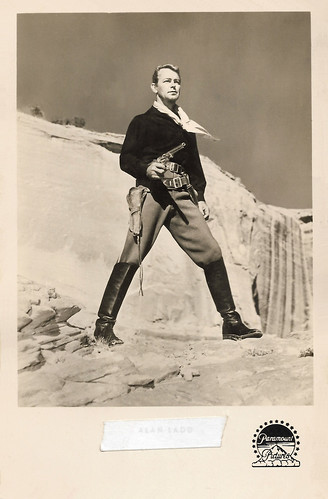 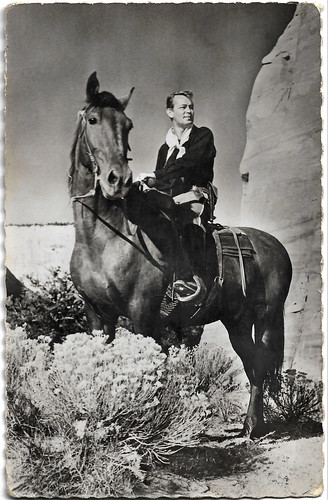 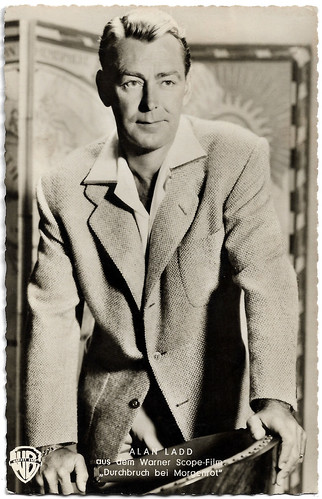 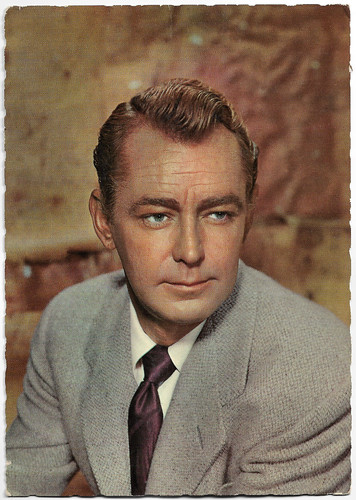