Yesterday, 14 December 2019, the queen of the Nouvelle Vague, film actress, singer and director Anna Karina has passed away. French, but Danish-born Karina was the muse of director Jean-Luc Godard and starred in eight of his films. “Today, French cinema has been orphaned. It has lost one of its legends,” culture minister Franck Riester tweeted. Anna Karina was 79. 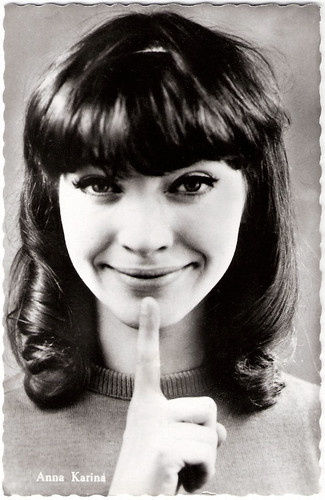 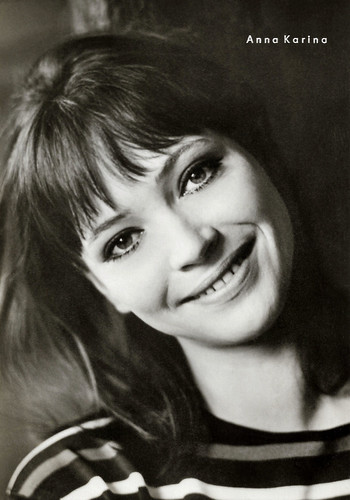 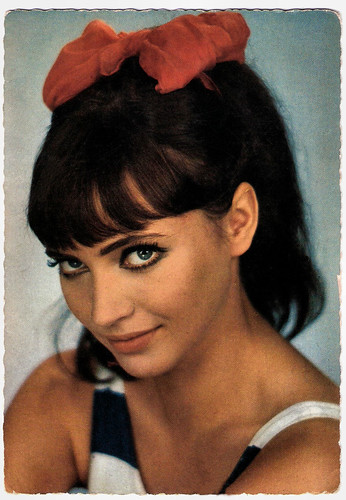 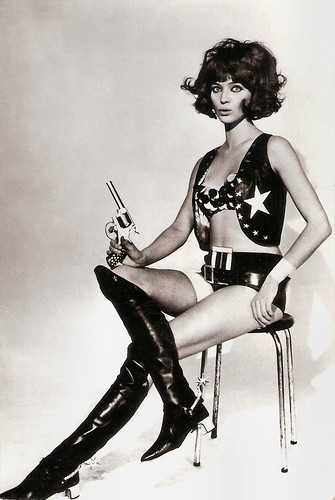 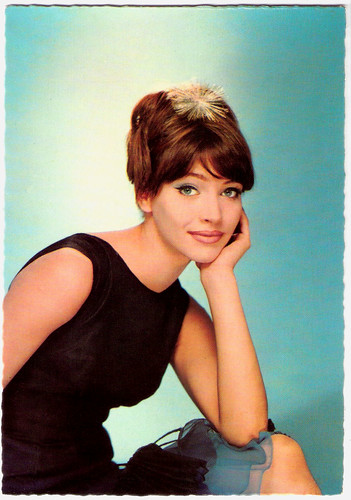 
Anna Karina was born Hanne Karen Blarke Bayer in Solbjerg, Denmark, in 1940. Her mother was a dress shop owner and her father a ship's captain. Before she turned one, her father had left her mother.

First she was raised by her maternal grandparents, where she stayed until the age of four. Then she spent time in and out of foster homes, before returning to live with her mother from the age of eight. She has described her childhood as 'terribly wanting to be loved' and as a child, she made numerous attempts to run away from home.

She began her career in Denmark, where she sang in cabarets and worked as a model playing in commercials. At age 14, she appeared in the Danish short film Pigen og skoene/Girls and Shoes (Ib Schedes, 1954-1959), which was presented at the Cannes Film Festival 1959 and won a small award. She studied dance and painting in Denmark and for a while made a living selling her paintings.

In 1958, after a row with her mother, she hitchhiked to Paris. She had a break when, sitting briefly at the cafe Les Deux Magots, she was approached by a woman from an advertisement agency who asked her to do some photos. Hanne became a rising fashion model, and met Coco Chanel and Pierre Cardin. Chanel advised her to use as a professional name Anna Karina.

She made a series of Palmolive ads in a bath covered in soapsuds, and was noticed by Jean-Luc Godard, then a film critic for Cahiers du cinéma. Godard was casting his debut feature film, À bout de souffle/Breathless (1960) starring Jean-Paul Belmondo. He offered her a small role, but she refused when he mentioned that there would be a nude scene.

However, she eventually accepted his offer to play a major role in his second film, Le Petit Soldat/The Little Soldier (1960) with Michel Subor. Karina, who was still under 21 had to persuade her estranged mother to sign the contract for her. 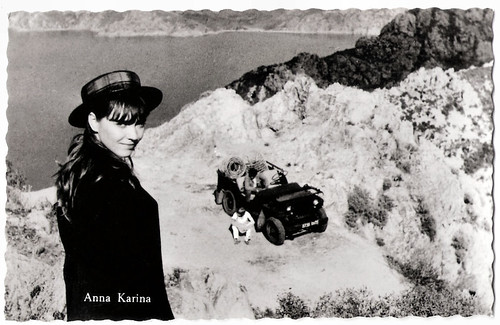 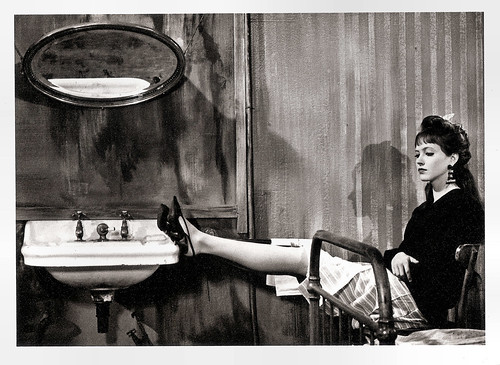 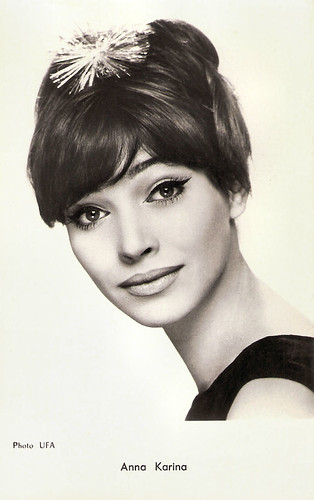 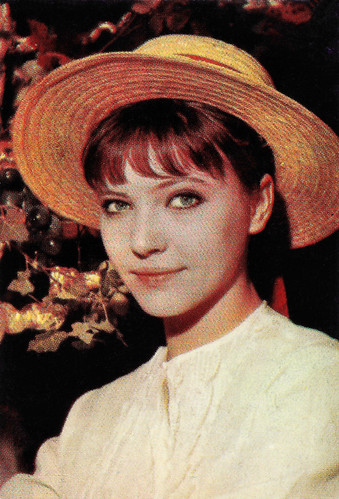 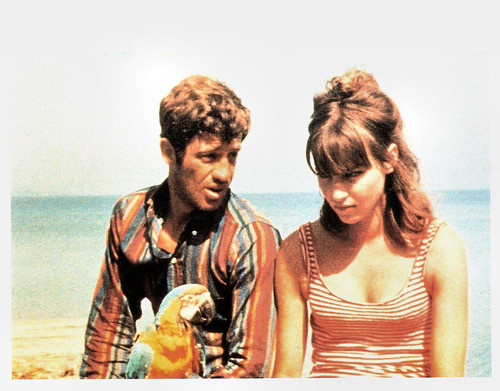 
Anna Karina and Jean-Luc Godard married during the shooting of their next film, Une femme est une femme/A Woman Is a Woman (1961) with Jean-Paul Belmondo and Jean-Claude Brialy. It is a tribute to American musical comedy and the first film which Godard shot in colour and Cinemascope.

Judd Blaise at AllMovie: "Rather than the sometimes alienating, dense intellectualism of later Godard works, Une femme est une femme offers aesthetic pleasure through luxurious visuals and a charming musical score by Michel Legrand. Against this bright backdrop, Karina proves particularly fetching, capturing the film's frolicsome mood in an unforced manner. While not one of Godard's most groundbreaking or influential films, Une femme est une femme is one of his most appealing and pleasurable efforts."

J. Hoberman at Criterion: "Mainly, A Woman Is a Woman is a valentine to Karina, who became pregnant during the course of the movie’s production; she and Godard were married in March 1961, an event that made the cover of Paris Match." At the Berlin Film Festival in 1961, Anna Karina was awarded as Best Actress for Une femme est une femme.

Though their cinematic collaboration seemed harmonious, their relationship was tumultuous and bitter behind the scenes. It was made all the more difficult by the fact that their relation was under constant public scrutiny. Their three-year marriage ended in 1964, though they continued to work together until 1966. In 1967, Godard and Karina divorced. 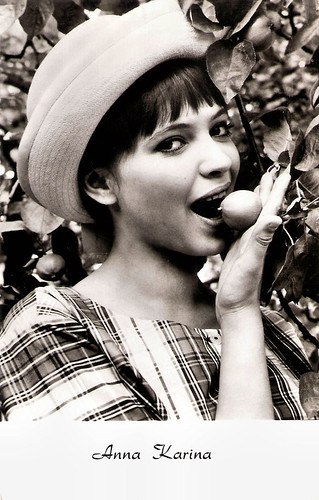 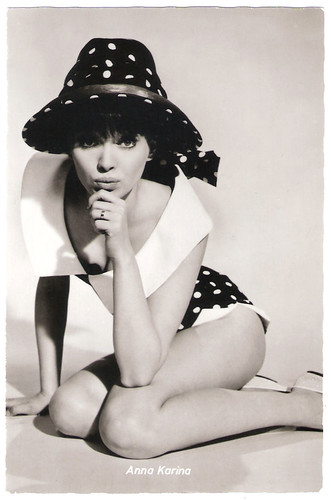 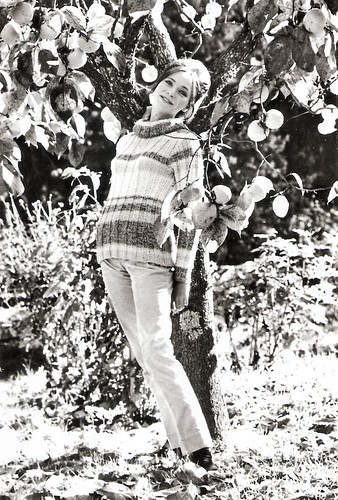 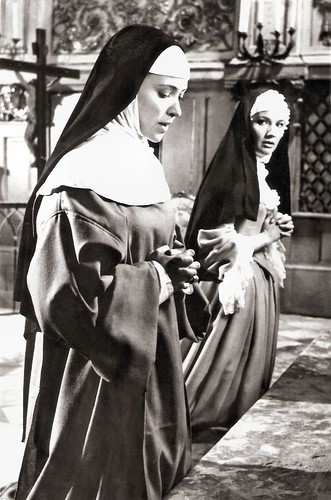 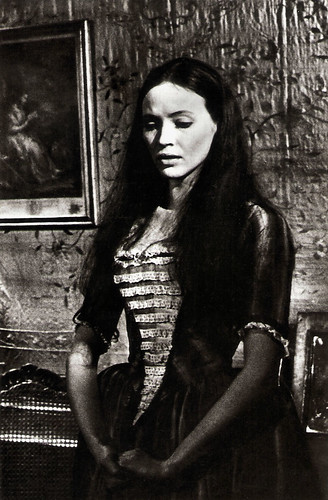 
Hal Erickson at AllMovie: "From all reports, Karina and Godard's relationship was symbiotic; it is certainly no coincidence that both actress and director went into a temporary artistic eclipse after their 1967 breakup."

Anna Karina's acting career was not, however, limited to Godard's films, and she had a successful collaboration with other well-known directors. Some consider as her best performance her role in La Religieuse/The Nun (Jacques Rivette, 1966) in which she plays an intelligent, freedom-loving woman who is forced into a convent against her will.

Karina also maintained a singing career and scored hits with Sous le soleil exactement and Roller Girl. Both songs, which Serge Gainsbourg had especially written for her, were taken from the TV musical Anna (Pierre Koralnik, 1967). 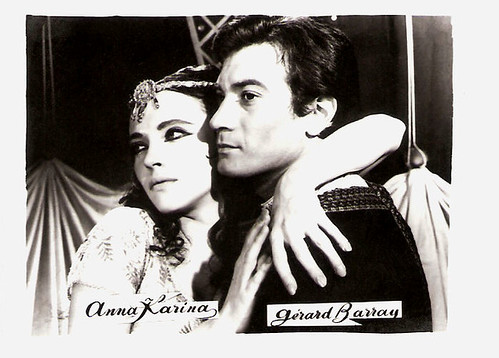 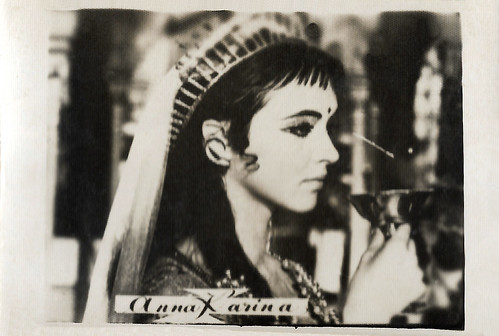 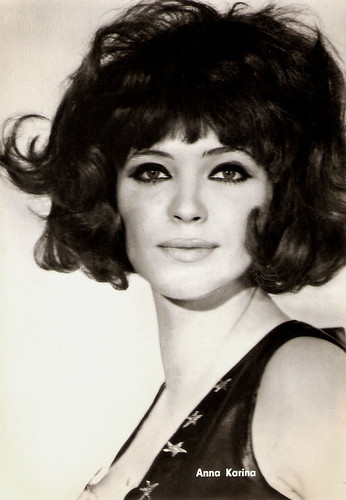 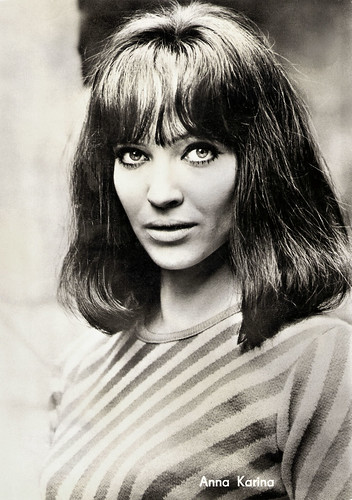 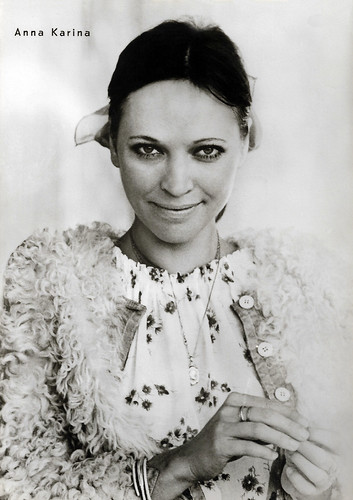 
Anna Karina acted in but also wrote, produced and directed Vivre ensemble/Living Together (1973). She has also written three novels and made several appearances on television. In 2005 she released 'Chansons de films', a collection of songs sung in films.

Karina's final film as a director was Victoria (2008) in which she also starred. Mark Deming at AllMovie: "Thirty-five years after directing her first feature film, iconic actress Anna Karina once again steps behind the camera for this charming comedy-drama shot in Canada. Jimmy (Emmanuel Reichenbach) and Stanislas (Jean-Francois Moran) are a pair of nightclub performers who play second-rate gay nightclubs as part of a drag act called 'Les Lolitas'."

On 14 December 2019, Anna Karina has died in a Paris hospital of the effects of cancer at the age of 79, her agent Laurent Balandras told AFP, adding that she passed away in the company of her fourth husband, American director Dennis Berry. 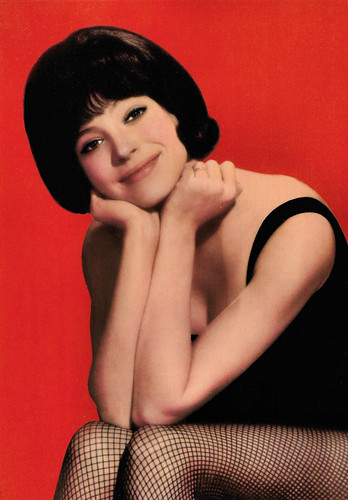 What incredible eyes she has!

I love this era in film and style.

What a wonderful collection!

Great cards and fascinating story, thanks for stopping by. And I never thought of it, but you are quite likely right he may have been the only one.

Bob, it is such a natural looking postcard, the one of Anna Karina! She's lovely and looks a little like Audrey Hepburn, no?

I saw Marcello Mastroianni in "Bell'Antonio" when I was young and dating a boy who was much more mature than I was. I was shocked by the movie but never forgot it. I'm sure it is a classic today! :)

Thanks for commenting at my PFF post. I really appreciate it.

I checked to see if I could find any images of her artwork with no luck. But I found these two of interest:

All three clips were great. I love the street scene in the first...interesting how there was no sound...no talking in that part of it.

Wow, thank you for sharing this little bit of history. I went to school with a girl who was named Anna Karina Villatorres (in Guatemala, CA), she said she was named after a movie star, her father chose the name. She dose have incredible eyes!!

I love that she hitch hiked to Paris and was discovered at Les Deux Magots. That's a movie in itself. Thanks again for an entertaining and informative post.

Thank you all for stoppong by and for your comments. Mary, I'm very curious now about Bel Antonio. Must see that film. And, Anita, thanks for the links, they're an interesting addition to the post. Till next PFF! 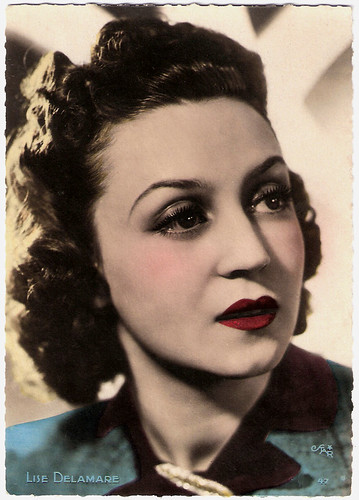