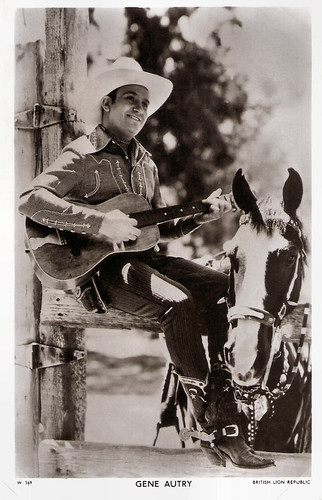 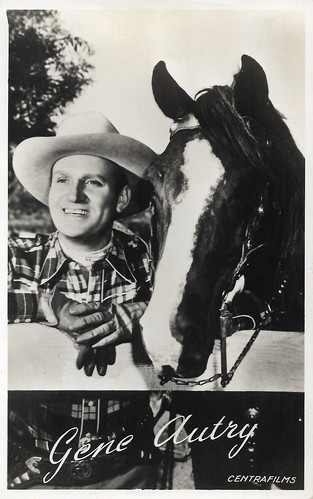 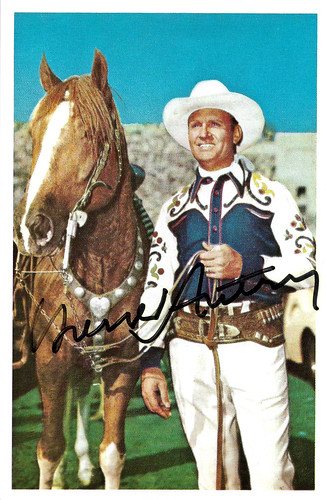 
Orvon Grover 'Gene' Autry was born near Tioga in Grayson County in north Texas, in 1907. His parents were Delbert Autry and Elnora Ozment.

He worked on his father's ranch while at school. After leaving high school in 1925, Autry worked as a telegrapher for the St. Louis–San Francisco Railway. His talent at singing and playing guitar led to performing at local dances.

While working as a telegraph operator in Chelsea, Oklahoma, Autry would sing and accompany himself on the guitar to pass the lonely hours. One night, he was encouraged to sing professionally by a customer, the famous humorist Will Rogers. As soon as he could save money to travel, he went to New York. In the autumn of 1928 he auditioned for Victor Records, but was turned down. He got the advice to sing on radio to gain experience and to come back in a year or two.

In 1928, Autry was singing on Tulsa radio station KVOO (now KFAQ) as 'Oklahoma's Yodeling Cowboy'. Autry signed a recording deal with Columbia Records in 1929. He worked in Chicago on the WLS-AM radio show 'National Barn Dance' for four years, and with his own show, where he met singer-songwriter Smiley Burnette.

Autry and Burnette were discovered by film producer Nat Levine in 1934. Together, Autry and Burnette made their film debut for Mascot Pictures Corp. in In Old Santa Fe (David Howard, Joseph Kane, 1934) starring Ken Maynard, as part of a singing cowboy quartet.

Levine then gave Autrey the starring role in the 12-part serial The Phantom Empire (Otto Brower, B. Reeves Eason, 1935) with Frankie Darro. Shortly thereafter, Mascot was absorbed by the newly formed Republic Pictures Corp. and Autry went along to make a further 44 films up to 1940, all B-Westerns in which he played under his own name, rode his horse, Champion, had Burnette as his regular sidekick, and had many opportunities to sing in each film. 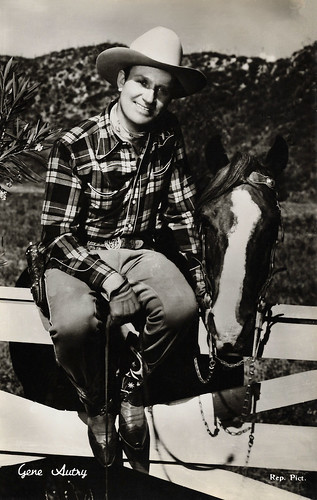 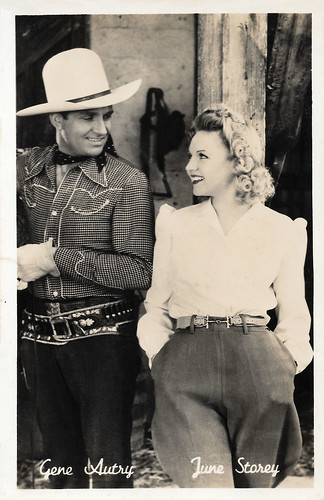 
During the 1930s and 1940s, Gene Autry personified the straight-shooting hero — honest, brave, and true — and profoundly touched the lives of millions of Americans. In the Motion Picture Herald Top Ten Money-Making Western Stars poll, Autry was listed every year from the first poll in 1936 to 1942 and 1946 to 1954 (he was serving in the AAF 1943–45).

Gene Autry was the first of the singing cowboys in films, but was succeeded as the top star by Roy Rogers while Autry served as a flight officer with the Air Transport Command during World War II. Part of his military service included his broadcast of a radio show for one year; it involved music and true stories.

Gene briefly returned to Republic after the war to finish out his contract. The contract had been suspended for the duration of his military service, and he had tried to have it declared void after his discharge. Republic did then publicise him as 'King of the Singing Cowboys'. He appeared in the film Texans Never Cry (Frank McDonald, 1951), with a role for newcomer Mary Castle.

After 1951, Autry formed his own production company, Flying A Productions, to make Westerns under his own control, which continued the 1947 distribution agreement with Columbia Pictures. During the 1950s, Flying A produced his TV series The Gene Autry Show (1950), The Adventures of Champion (1955), and Annie Oakley (1954). 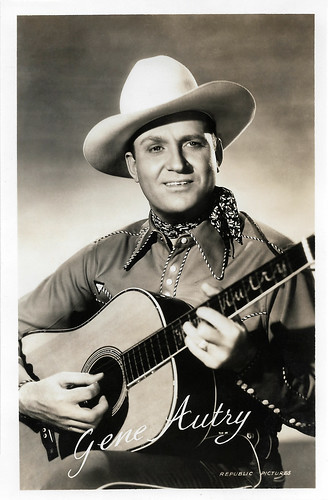 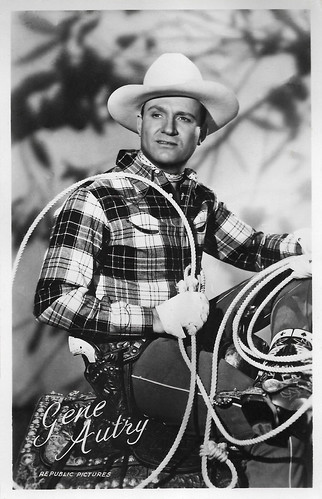 Back in the Saddle Again


Gene Autry was also one of the most important pioneering figures in the history of country music, considered the second major influential artist of the genre's development after Jimmie Rodgers. His singing cowboy films were the first vehicle to carry country music to a national audience.

In addition to his signature song, 'Back in the Saddle Again', and his hit 'At Mail Call Today', Autry is still remembered for his Christmas holiday songs, most especially his biggest hit 'Rudolph, the Red-Nosed Reindeer' as well as 'Frosty the Snowman', 'Here Comes Santa Claus', and 'Up on the House Top'.

From 1940 to 1956, Autry had a huge hit with a weekly show on CBS Radio, 'Gene Autry's Melody Ranch'. His horse, Champion, also had a CBS-TV and Mutual radio series, 'The Adventures of Champion'. In response to his many young radio listeners aspiring to emulate him, Autry created the Cowboy Code, or Ten Cowboy Commandments. These tenets promoting an ethical, moral, and patriotic lifestyle that appealed to youth organisations such as the Boy Scouts, which developed similar doctrines.

Autry retired from show business in 1964, having made almost 100 films up to 1955 and over 600 records. Autry was the owner of a television station, several radio stations in Southern California, and the Los Angeles / California / Anaheim Angels Major League Baseball team from 1961 to 1997.

At the age of 91, Gene Autry died in 1998 in Studio City, California, U.S. In 1932, Autry had married Ina May Spivey, the niece of Jimmy Long. After she died in 1980, he married Jacqueline Ellam, who had been his banker, in 1981. He had no children by either marriage. He is a member of both the Country Music Hall of Fame and Nashville Songwriters Hall of Fame, and is the only person to be awarded stars in all five categories on the Hollywood Walk of Fame, for film, television, music, radio, and live performance. The town of Gene Autry, Oklahoma was named in his honour, as was the Gene Autry precinct in Mesa, Arizona. 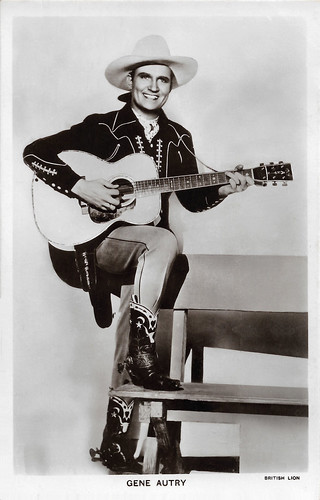 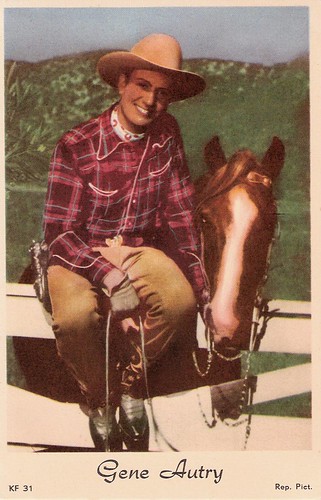 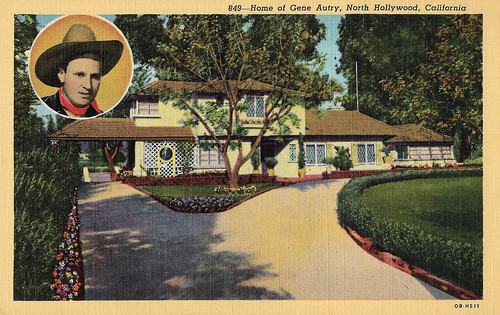