Lissi Arna (1900-1964) was a beautiful, exotic-looking German silent screen actress. She became a star opposite the popular action star Harry Piel, and had a brief Hollywood career. Usually she was cast as a femme fatale or a fallen woman. 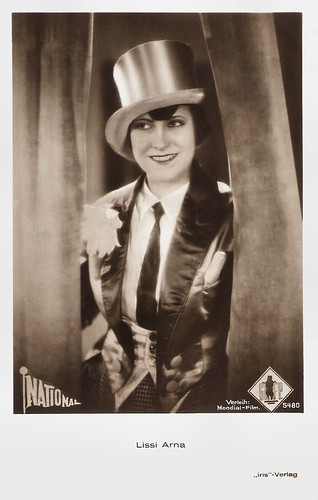 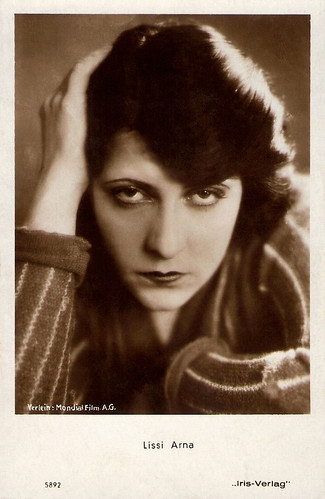 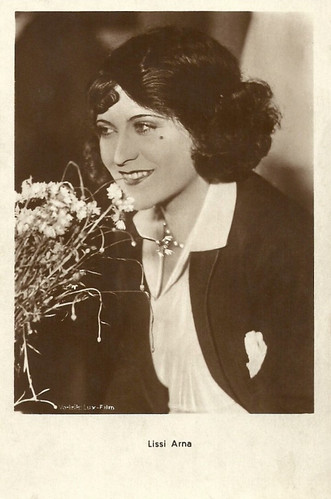 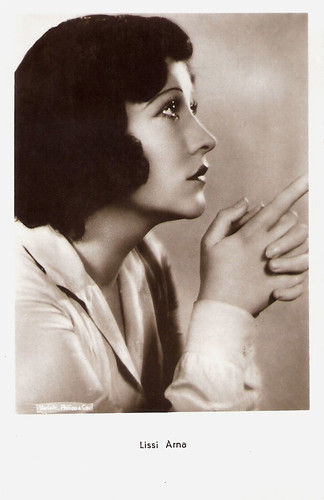 
Lissi Arna (or Lissy Arna) was born as Elisabeth Arndt in Berlin in 1904. She attended a trade school and then started to work for a house broker.

Meanwhile she also appeared as an extra in silent shorts like Der Katzensteg/The Cat's Gang Plank (Max Mack, 1915) before she was engaged by comedian Ottchen Mücke as partner for his series of short films, directed by Rudi Bach.

The public liked her and she even got her own short, Lissys Flimmerkur/Lissy's Short Flicker (Rudi Bach, 1919). Her first real feature film was Abenteuer einer Nacht/Night's Adventures (1923), directed and produced by action star Harry Piel.

The next two years she lived with relatives in New York and her film career was interrupted. When she returned it was again Harry Piel who offered her the female lead in his film Abenteuer im Nachtexpress/Adventures in the Night Express (1925, Harry Piel). This film paved the way for a great career. 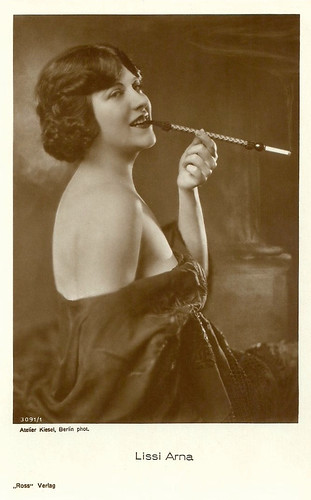 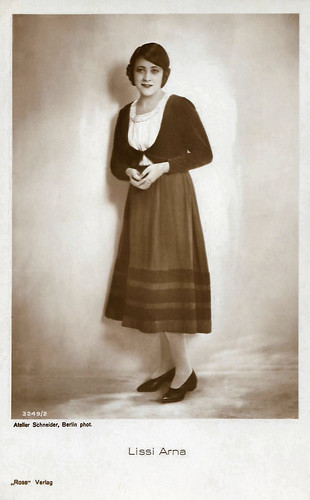 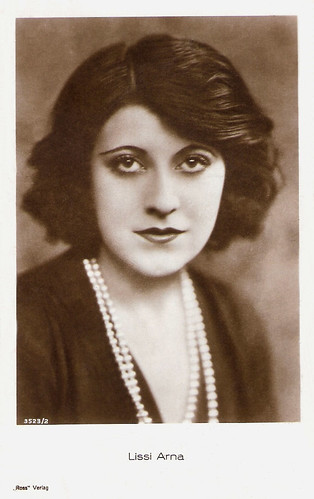 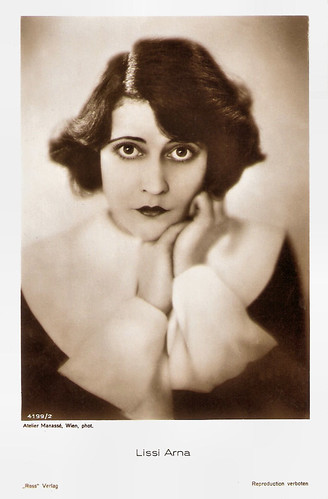 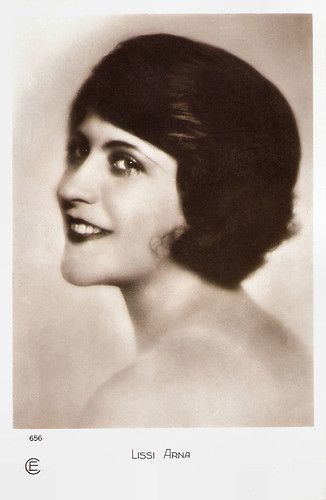 French postcard by Cinémagazine-Edition, Paris, no. 656.

She was contracted by RKO and played William Boyd's German fiancee in the World War I melodrama Beyond Victory (John S. Robertson, 1931). The film was an obvious attempt at duplicating the success of Universal's antiwar statement All Quiet on the Western Front (Lewis Milestone, 1930) but fell far short of such lofty expectations and did little for her. Apparently her role was severely cut prior to release.

In Hollywood, she went on to play in several German-language versions of American pictures like Die Maske fällt/The Costume Falls (William Dieterle, 1930) and Dämon des Meeres/Demon of the Sea (Michael Curtiz, 1930).

In 1931 she returned to Germany and achieved her last great successes with the Edgar Wallace adaptation Der Zinker/The Squeeker (Martin Fric, Carl Lamac, 1931) with Karl Ludwig Diehl, and the mountain drama Berge in Flammen/Mountains on Fire (Karl Hartl, Luis Trenker, 1931).

The arrival of sound film obviously had hurt her career. She moved over to work in the theatres of Berlin. Her further film works were confined to supporting roles in films like Zu neuen Ufern/To New Shores (Douglas Sirk, 1937) starring Zarah Leander.

Lissi married the physician Dr. Kleiber in 1939 and then retired completely from the film business. She lived with her husband in Venezuela till his death in the late 1950s. She returned to Germany, and in 1962 she played for the last time in a film, Das Leben beginnt um acht/Life Starts at Eight (Michael Kehlmann, 1962) with O.E. Hasse.

In 1964, Lissi Arna died of cancer in her hometown, Berlin. She was 63. Arna was interred at the Kaiser-Wilhelm-Gedächtnis-Friedhof in Westend. Wikipedia notes that her grave has not been preserved. 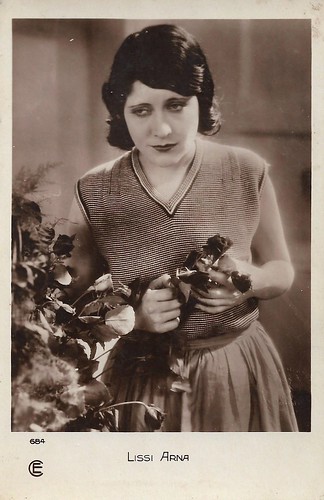 French postcard by Editions Cinémagazine, no. 684. 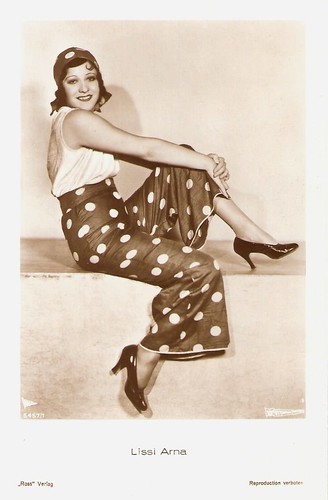 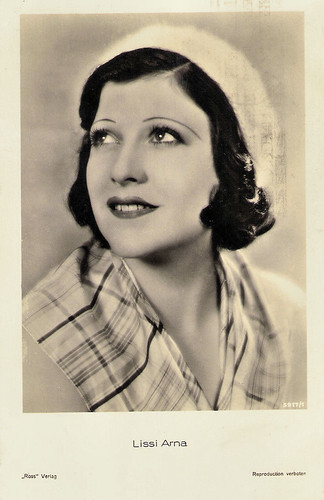 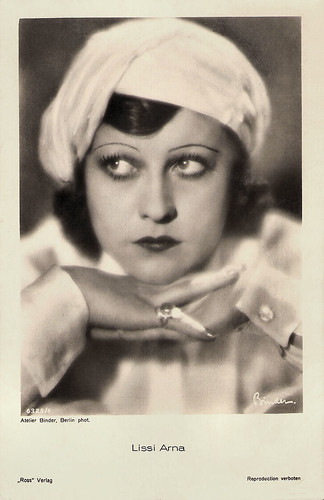 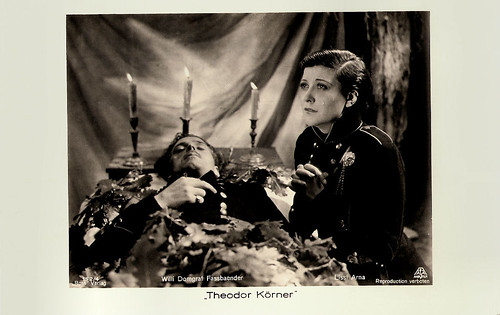