Vanni Marcoux or Vanni-Marcoux (1877–1962) was a French operatic bass-baritone, renown as one of the most memorable singing-actors of the 20th century. Marcoux only acted in three silent films and one sound film, but these were significant leads. 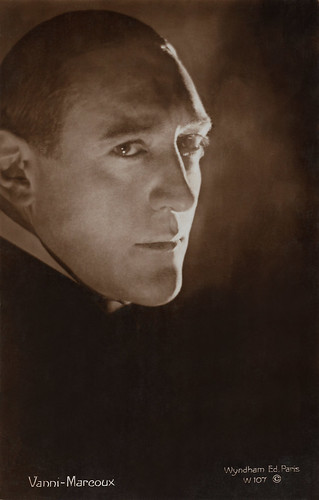 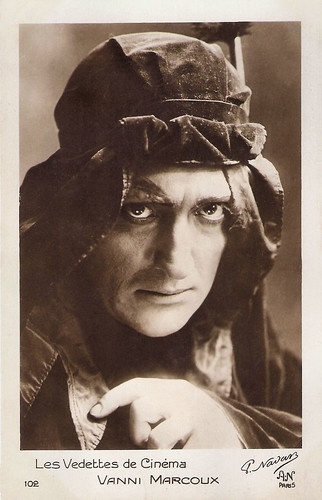 
Vanni Marcoux was born in 1877 in Turin, Italy, as Jean Emile Diogène Marcoux. He was born to a French father and an Italian mother. His mother gave him the nickname 'Vanni', short for Giovanni, the Italian equivalent of Jean.

He studied with Collini at the music conservatory in his hometown. He made his operatic debut in 1894, at the age of 17, as Sparafucile in Giuseppe Verdi's 'Rigoletto', in Turin.

After further studies in Paris with Frédéric Boyer, he made his first stage appearance in France, at Bayonne, as Frère Laurent in Charles Gounod's 'Roméo et Juliette', in 1899.

Marcoux became particularly associated with the French and Italian repertories. He made his Paris Opéra debut in 1908 as Méphisto in Gounod's 'Faust', and at La Scala in 1910, as the Old Hebrew in Camille Saint-Saëns' 'Samson and Delilah'.

The same year, 1910, he sang for the first time Jules Massenet's 'Don Quichotte' at the Gaieté Lyrique in Paris, a part that would soon become his signature role. His huge repertoire included an estimated 240 roles and he won renown as one of the most memorable singing-actors of the 20th century. He married Madeleine Morlay, an actress, in 1914. 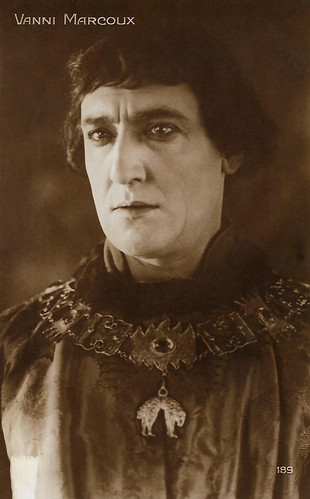 
Vanni Marcoux only acted in 3 silent films and one sound film, but these were significant leads. He appeared as Faust in Don Juan et Faust/Don Juan and Faust (Marcel L'Herbier, 1922) opposite Jaque Catelain as Don Juan, and as Maurice Ferrioul in the Franco-British coproduction The Scandal (Arthur Rooke, 1923).

His best known role is probably as Charles le Téméraire (Charles the Bold) in Le Miracle des Loups/Miracle of the Wolves (Raymond Bernard, 1924) with Charles Dullin and Yvonne Sergyl. He later also appeared as Vitalis in the sound film Sans famille/Without family (Marc Allégret, 1934) with Robert Lynen as Rémy.

Vanni Marcoux began teaching at the Paris Conservatory in 1938. He retired from the stage in 1948 and became director of the Grand Théâtre de Bordeaux. He held that post from 1948 to 1951.

Wikipedia: "Vanni Marcoux's career was impressive for its longevity and the remarkably wide variety of operatic roles which it embraced. He possessed a clear, although not especially large voice, with a characteristic vibrato and a weight and timbre of almost tenor quality."