Marguerite Clark (1883–1940) was an American stage and silent film actress, who after a Broadway career in 1900-1913 had a prosperous film career in the 1910s, mainly at Famous Players. As a film star, at one time, Clark was second only to Mary Pickford in popularity. 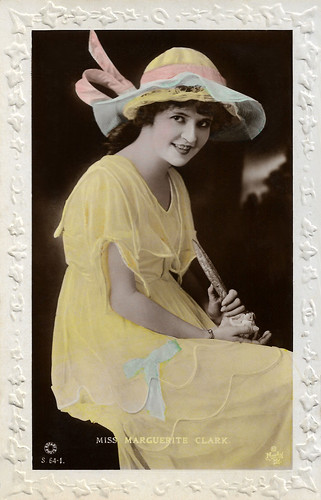 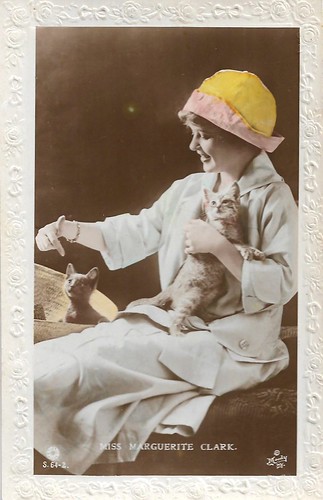 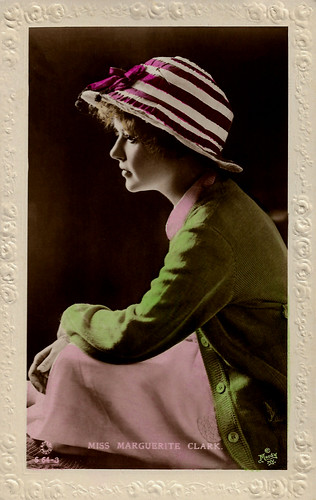 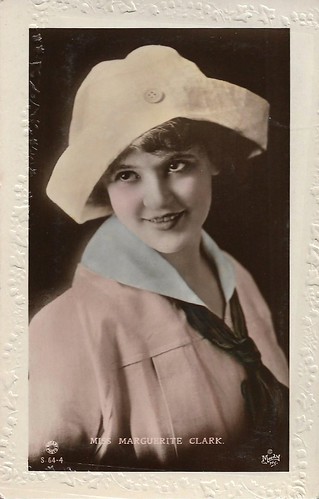 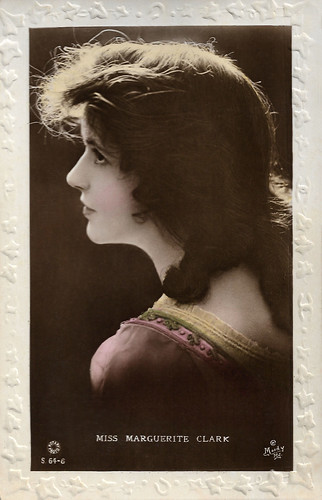 
Born in Avondale, Cincinnati in 1883, Marguerite Clark was the third child of Augustus 'Gus' James and Helen Elizabeth Clark. She grew up on an Ohio farm. After her mother (1893) and father (1896) died, Clark's sister Cora was appointed as her legal guardian and removed her from public school to further her education at Ursuline Academy in Cincinnati, Ohio.

Clark finished school at age 16, decided to pursue a career in the theatre and soon made her Broadway debut in 1900. The 17-year-old performed at various venues. In 1903, the tiny-sized Clark (she was 5-foot-tall (1.47 m) was paired with the huge comedian DeWolf Hopper in the Broadway play 'Mr. Pickwick', after which several adventure-fantasy roles followed, which would become her hallmark. In 1910, Clark appeared in 'The Wishing Ring', a play directed by Cecil B. DeMille and later made into a motion picture by Maurice Tourneur.

In 1912, Clark performed in a lead role with John Barrymore in the play 'The Affairs of Anatol' later made into a motion picture by Clark's future film studio Famous Players-Lasky and directed by DeMille.

That same year, she starred in a retelling of 'Snow White and the Seven Dwarfs'. The classic tale was adapted for the stage by Winthrop Ames, who closely oversaw its production at his Little Theatre in New York and personally selected the lead actress. Clark expressed her delight in the role, and the play had a successful run into 1913.

Clark's popularity led to her signing a film contract in 1914 with Adolph Zukor's Famous Players Film Company. Over the next two years, she was cast in starring roles in more than a dozen features. She then reprised her stage role in a film that would define the Clark persona — the influential screen version of Snow White (1916). A few years ago a print of the film was found at the Dutch EYE Filmmuseum. 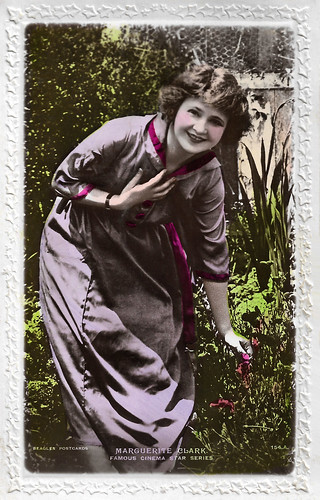 British postcard in the 'Famous Cinema Stars Series' by Beagles & Co. Ltd., London, no. 154.A. 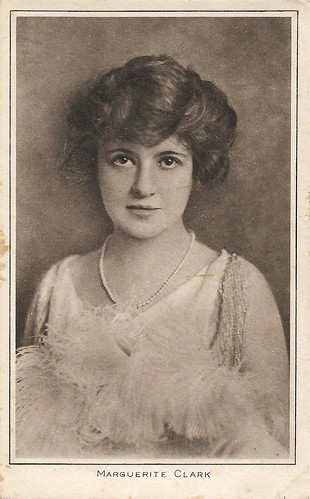 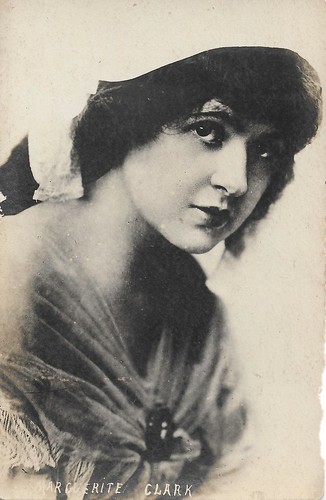 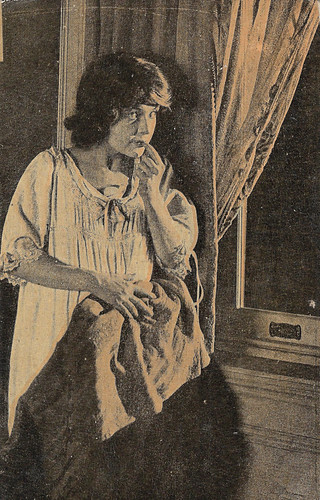 
At age 31, it was relatively late in life for a film actress to begin a career with starring roles, but Marguerite Clark had the little-girl look, like Mary Pickford, that belied her years. And audiences craved for petite, waif-like actresses in the 1910s.

Clark made her first appearance on screen in the four-reeler Wildflower (1914), directed by Allan Dwan. In 1915, Clark starred in a feature-length production of The Goose Girl (Fred Thomson, 1915), based on a 1909 bestseller.

Clark's screen partners were Creighton Hale, Harold Lockwood, Monroe Salisbury, Frank Losee, Richard Barthelmess, Conway Tearle, Jack Pickford, and many others. Clark made all but one of her 40 films with Famous Players-Lasky, her last with them was Easy to Get (Walter Edwards, 1920), in which she starred opposite Harrison Ford and Rod La Rocque.

Her next film, Scrambled Wives (Edward H. Griffith, 1921), was produced by herself, with First National Pictures distribution. The annual Quigley Publications poll of motion picture exhibitors ranked her as the nation's top movie actress of 1920, and the second-place movie star overall to Wallace Reid. She was 38,  disbanded her production company and retired to be with her husband at their country estate in New Orleans.

In 1918, Clark had married New Orleans plantation owner and millionaire businessman Harry Palmerston Williams. Her husband forbade her kissing any of her leading men. The marriage ended with the death of Williams in 1936 because of an aircraft crash. After his death, Clark was the owner of the Wedell-Williams Air Service Corporation, which had built and flown air racers, along with other aviation enterprises until sold in 1937.

After the death of her husband, Clark moved to New York City where she lived with her sister Cora. In 1940, she entered LeRoy Sanitarium where she died five days later of pneumonia at the age of 57. She was cremated and buried with her husband in Metairie Cemetery in New Orleans. For her contribution to the motion picture industry, Marguerite Clark has a star on the Hollywood Walk of Fame. With the exception of five films, most of her 40 films are considered lost. 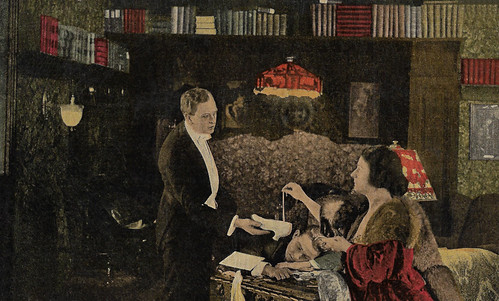 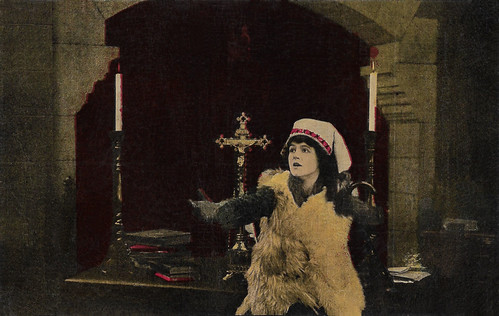 Spanish collectors card by Chocolat Imperiale, no. 6 (of 6 cards). Photo: Famous Players/ Paramount. Marguerite Clark in Out of the Drifts (J. Searle Dawley, 1916). The Spanish release title was La Borrasca. 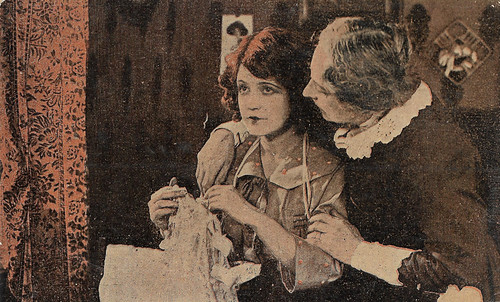 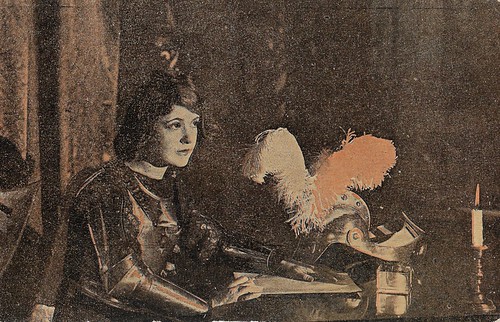