Yes, we have a guest post at EFSP. Today the floor is for my friend, collector Carla Bosch a.k.a. Meiter.

Carla: "Some time ago I told Paul I found some lovely cards in my magic attic. I was looking for other cards which I know must be there too, but instead, I found these. This often happens: when you search for one thing you will find another thing that has been lost a long time ago too. The cards I found were vintage black and white cards with filmstars wearing bathing suits. Paul immediately suggested I should make a list as the spring approaches and we are longing for some sun. I thought it would be a nice idea to pick some cards that are not on European Film Star Postcards, but this proved to be rather difficult. It is hard to find a card that is not on this site. However, I did find five cards that should have been on the EFSP site… I added a few cards of American filmstars. The site is moving towards a more worldwide approach and coverage, so this should not be a problem." 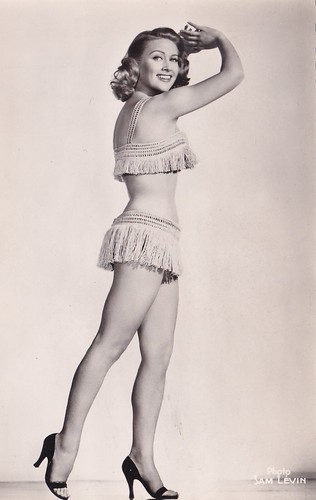 Carla: "French actress Martine Carol in a bikini with frills. I don’t think the bikini was meant to swim with. Many considered her a French Marilyn Monroe. I do not agree. Perhaps her personal problems: alcohol, drugs, a suicide attempt, and four marriages remind of Marilyn’s stormy life, but her appearance in swimwear cannot be compared with Marilyn." 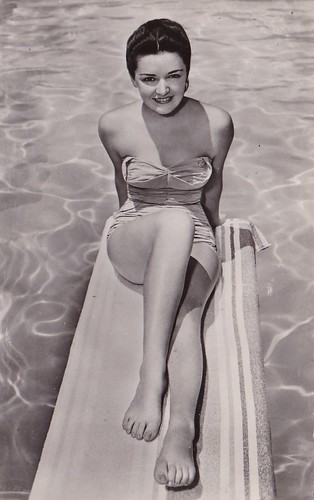 "A lovely card of Italian-American operatic singer and actress (Anna) Maria Alberghetti. She was compared to another Italian-born actress: Pier Angeli. Alberghetti, however, had a rather more successful career and personal life. I think she radiates this satisfaction with her life on this card. After the photoshoot, she rolls off her air mattress and goes for a swim." 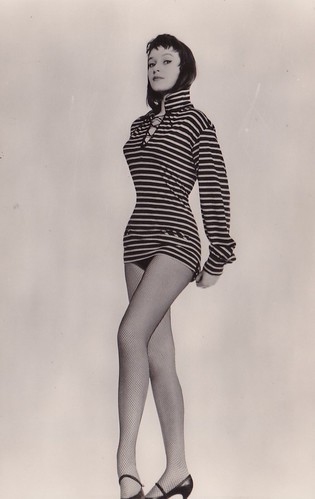 "French actress Beatrice Altariba. Frankly, I don’t know what to make of her beachwear. I suppose she wears a bathing suit or bikini beneath her long-sleeved sweater. Her hair is tucked in the collar and she wears shoes with high heels. Our (or, at least mine) attention is drawn to her legs. And yes, she has nice legs. (I read she was a model as well.) I think it is a wonderful card and perhaps that is all there is to it." 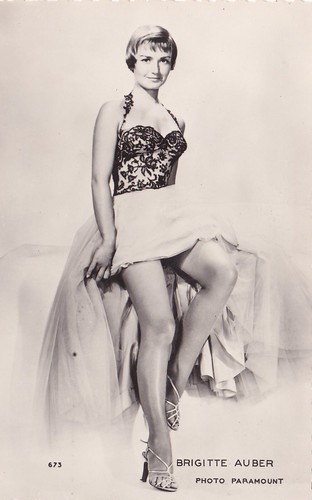 "French actress Brigitte Auber. I am not sure whether it is a bathing suit Brigitte wears. It could be a dress and she pulls up the skirt. Or: she wears a bathing suit and has a large tablecloth across her legs. Anyway, Brigitte does show us her legs. On purpose." 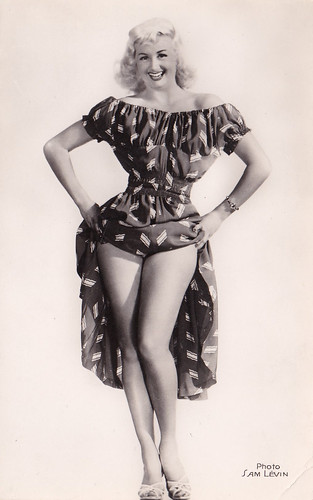 "On the card, it says this is “Cereda”. I searched the internet and have come to the conclusion this must be Claudine Cereda, a French singer and dancer. I don’t know anything about her. She does not wear a bathing suit in this picture. Instead, she wears a summer dress and shows us her legs. Just like Brigitte Auber. She radiates a kind of cheerfulness and it looks as if she is preparing to dance the can-can." 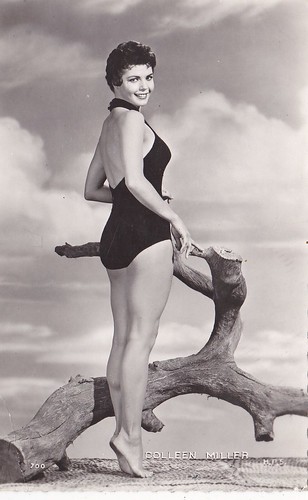 "American actress Colleen Miller. On this card, Colleen wears a decent and practical bathing suit. I think she is standing in a studio with a tree trunk. Because of this bathing suit, I have the impression that Colleen is a nice, decent and practical girl as well. Of course, I could be wrong and she is a wild and unpredictable girl. This card, however, tells us something different." 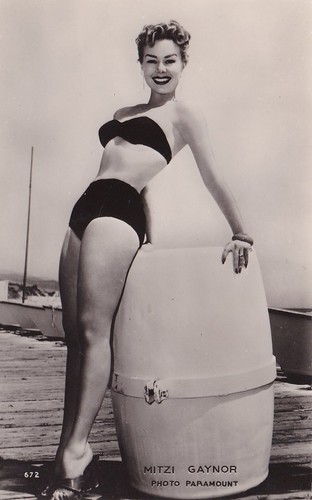 "American actress Mitzi Gaynor. Mitzi is wearing a bikini. She apparently is standing on a scaffolding, because we can see a boat behind her. But of course, we can never be sure. She is an actress, acting in movies in studios, and she can be standing in a studio for all we know. Yet, I like to think she is standing in the cold in her bikini on a scaffolding." 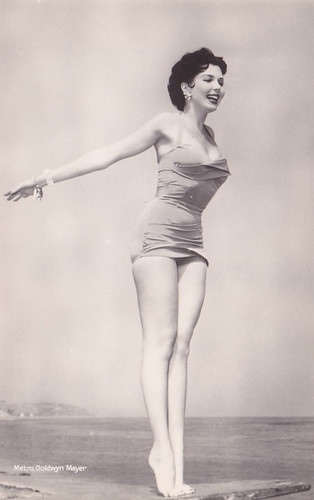 "American dancer, singer and actress Ann Miller wearing a bathing suit. This picture radiates a kind of 'lust for life'. Ann stands on her toes, arms back, in a posture as if she is going to dive into the water. She doesn’t mind the camera. Yet, she knew she was going to be photographed because she did not take off her jewelry. I doubt whether she would wear bracelets and earrings if she was planning to take a swim. Again in a studio?" 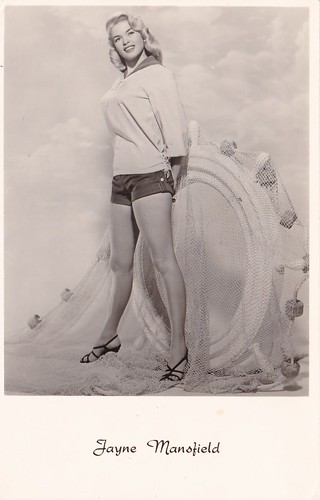 "I like this card of American actress and pin-up Jayne Mansfield because it is rather different from what we are used to from Jayne. My guess is that this picture was taken when she was not yet world-famous. She is wearing a nice pair of shorts, a sweater with long sleeves and sandals which are partly hidden by fishing nets. My attention is drawn to her pretty face and her bare legs. On pictures that were published later (again: it is an assumption this is an early picture) my attention is usually drawn to her obvious bombshell appearance. On this card, Jayne is not a sex bomb yet." 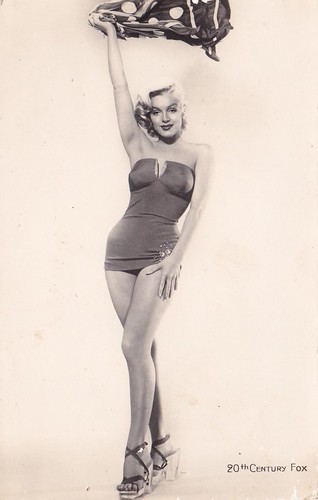 "And of course, no list of mine is complete without Marilyn Monroe. As I said before, I do not have many vintage cards of Marilyn, but I cannot stop bragging about the few I do have. This is one of them. My English Marilyn-loving-friend gave it to me as a present a week ago. So I can immediately boast about it on this list and tell how much I love this card. Again Marilyn is an outstanding example of a nice and decent pin-up postcard. She is wearing a strapless bathing suit and is on the verge of throwing her towel away. I know it probably is not a towel, but every card must have a story. So a towel it is.

These were 10 bathing suit cards that will prepare us for the approaching spring. I am always struck by how nice these cards are. They are in no way vulgar or cheap. They all radiate a kind of optimism and happiness which seems to belong to these years, I think. They were meant to be 'pinned-up' on a wall. (Hence the term 'pin-up'.) I often think they could have been used for advertising bathing suits. Fun fact: female pin-ups were called 'cheesecake' in America. Male pin-ups were called 'beefcake'.

I was looking for a bunch of large 'Ross' photos when instead I found these cards. I am curious about what I will find next time I search for those 'Ross' photos."

Carla, thank you very much for this sunny post. For me, spring has arrived!