American actress Dorothy Gish was the sister of silent film star Lilian Gish. D.W. Griffith discovered the two girls in 1912 and they starred in his epics Hearts of the World (1918) and Orphans of the Storm (1921). While Lillian specialised in dramas, Dorothy excelled in comedies. 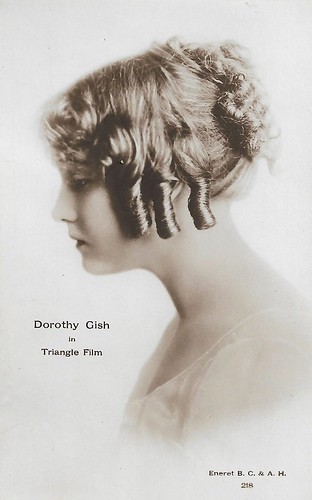 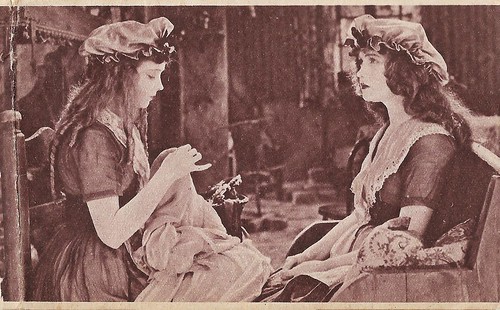 Picture from an unknown magazine, stuck to cardboard card. Lillian Gish and Dorothy Gish in Orphans of the Storm (D.W. Griffith, 1921). 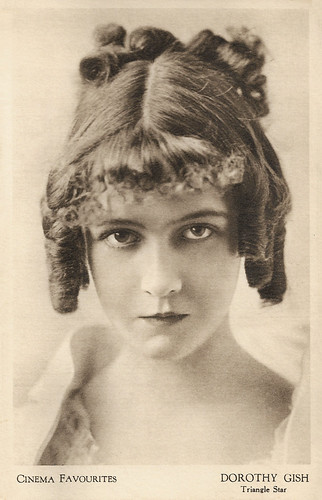 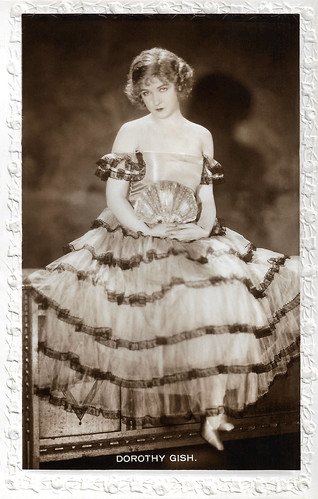 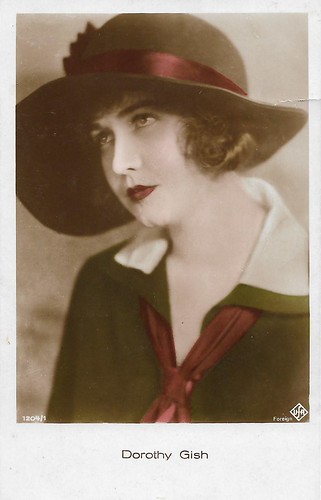 Specialised in pantomime and light comedy

As soon as Dorothy and her sister Lillian Gish were old enough, they became part of the act. In 1902, at the age of four, Dorothy made her stage debut portraying the character Little Willie in 'East Lynne', an adaptation of the 1861 English novel by Ellen Wood.

In 1912 they met fellow child actress Mary Pickford, and she got both of them extra work with Biograph Pictures in New York at salaries of 50 dollars a week. Director D.W. Griffith was impressed by both the girls and cast them in An Unseen Enemy (D.W. Griffith, 1912), their first picture.

Dorothy would go on to star in over 100 two-reel films and features over the years. She would appear in the very successful Judith of Bethulia (D.W. Griffith, 1914) with Blanche Sweet and Henry B. Walthall. Griffith did not use Dorothy in any of his earliest epics, but while he spent months working on The Birth of a Nation and Intolerance, Dorothy was featured in many feature-length films made under the banner of Triangle and Mutual releases.

They were directed by young Griffith protégés such as Donald Crisp, James Kirkwood, and Christy Cabanne. Elmer Clifton directed a series of seven Paramount-Artcraft comedies with Dorothy which were wildly popular with the public and the critics. They were so successful and popular that the tremendous revenue they raked in helped to pay the cost of Griffith’s expensive epics.

Dorothy specialised in pantomime and light comedy, while her sister Lilian appeared in tragic roles. Then the two sisters made a number of films together, including the extremely successful Hearts of the World (D.W. Griffith, 1918) and Orphans of the Storm (D.W. Griffith, 1921). In both films, Dorothy would play French girls, but in different periods of time.

Wikipedia about Hearts of the World: "In the 1918 release Hearts of the World, a film about World War I and the devastation of France, Dorothy found her first cinematic foothold in comedy, striking a personal hit in a role that captured the essence of her sense of humor. As the 'little disturber', a street singer, her performance was the highlight of the film, and her characterization on screen catapulted her into a career as a star of comedy films."

Dorothy became famous in a series of Griffith-supervised comedies for the Triangle-Fine Arts and Paramount companies from 1918 through 1920. Almost all of these films are now considered to be lost. 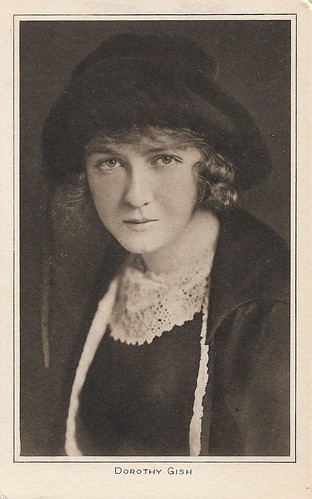 British postcard in the "Pictures" Portrait Gallery, London, no. 127. 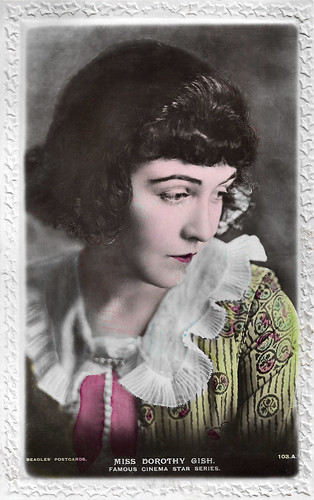 British postcard in the Famous Cinema Stars Series by J. Beagles & Co., London, no. 103.A. 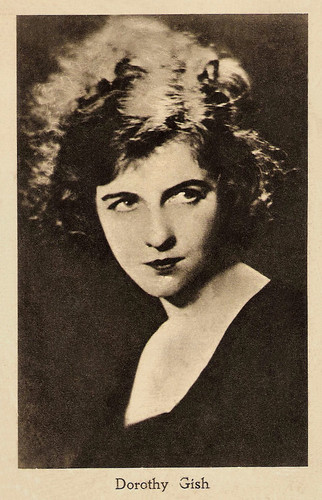 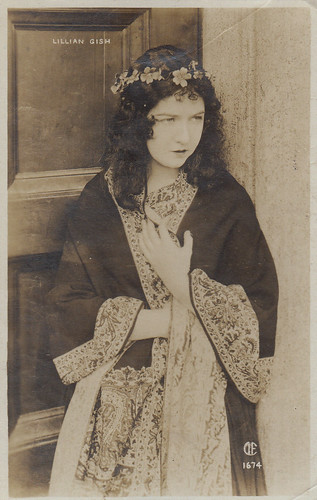 Mexican postcard by C.I.F. no. 1674. Photo: MGM. This is indeed one of the Gish sisters but it is Dorothy Gish, not Lillian. This portrait is from the film Romola (Henry King, 1924) in which the two sisters starred together. Collection: Marlene Pilaete.


While Dorothy Gish would excel in pantomime and light comedy, her popularity would always be overshadowed by that of her sister Lillian, who was considered to be one of the silent screen's greatest stars. Lillian would try her hand at directing, with a film called Remodeling Her Husband (Lillian Gish, 1920), which starred Dorothy and James Rennie. Dorothy and James married later that year.

Dorothy would only make a handful of films in the 1920s. In the costume film Romola (Henry King, 1924) about Italy in the Middle Ages, she would again co-star with Lillian. By 1926 Dorothy had moved to England, where she would star as the title figure in Nell Gwyn (Herbert Wilcox, 1926). The success led to three more British films.

Her last silent film would be Madame Pompadour (Herbert Wilcox, 1927) with Antonio Moreno. When the film industry converted to talking pictures, Dorothy made one in 1930, the British crime drama Wolves (Albert de Courville, 1930) with Charles Laughton.

Earlier, in 1928 and 1929, her performances in the Broadway play 'Young Love' and her work with director George Cukor renewed her interest in stagecraft and in the immediacy of performing live again. After that, she enjoyed a long career on the stage. Only incidentally, she accepted film offers. Director Otto Preminger cast Dorothy in his 1946 film, Centennial Summer. Her final film appearance was in The Cardinal (Otto Preminger, 1963).

Dorothy Gish had divorced James Rennie in 1935, but she never married again. In 1968, Dorothy Gish passed away by bronchial pneumonia in Rapallo, Italy. She was 70. Her remains were interred at Saint Bartholomew's Episcopal Church in New York City. In 1976, the Dorothy and Lillian Gish Film Theater was dedicated on the Bowling Green State University campus in Bowling Green, Ohio. 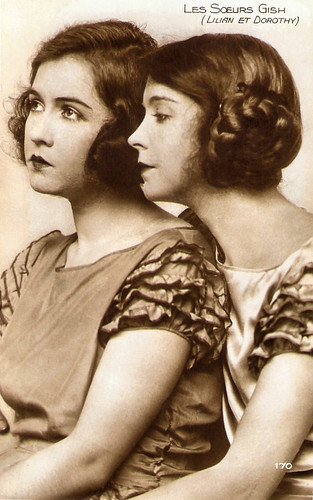 French postcard by Cinémagazine-Edition, Paris, no. 170. Caption: The Gish sisters (Lilian and Dorothy). 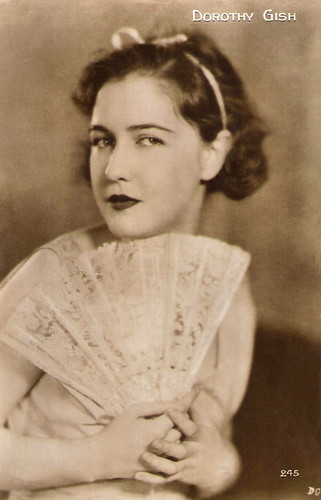 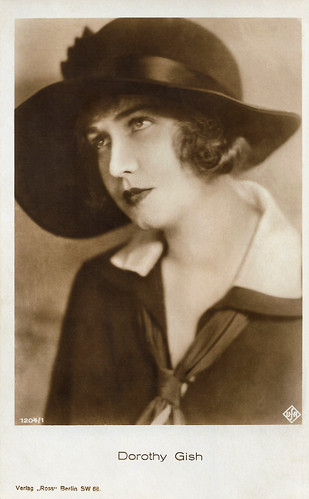 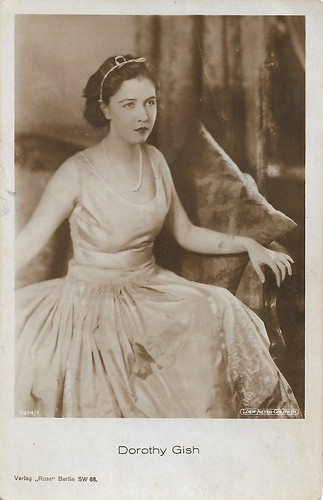 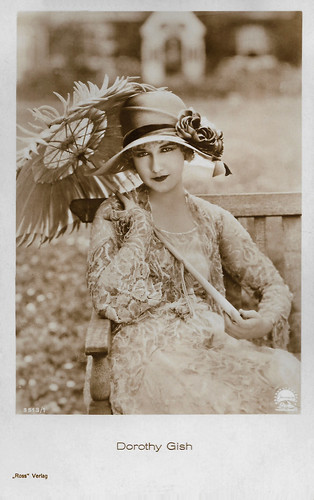