American stage and film actress Elsie Ferguson (1885–1961) first climbed up to become a big Broadway star. From 1917 till 1922, she had a fertile career in the silent cinema, debuting in Maurice Tourneur's Barbary Sheep (1917). She was nicknamed the 'Aristocrat of the Screen' because she often played elegant society women, but also because of her arrogant behaviour. 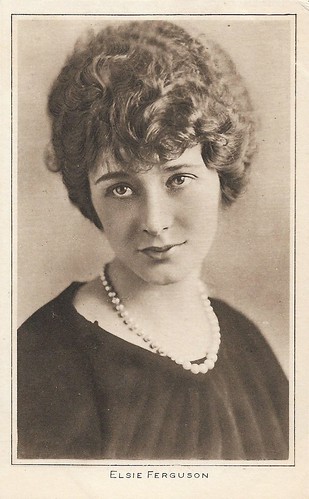 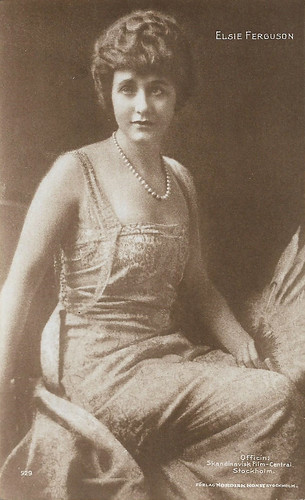 The Toast of Broadway

Elsie Louise Ferguson was born in 1883 in New York City. She was the only child of prominent lawyer Hiram Benson Ferguson and his wife. Due to her father's wealth, she had a privileged childhood, though she developed a penchant for socialism in her late thirties.

Educated in Manhattan, Elsie made her theatrical debut as a chorus girl in the musical comedy 'The Belle of New York' at the Madison Square Theatre in 1900. Her early flirtation with the stage was linked to a friend importuning her to join the chorus, which she did out of curiosity. She also was a chorus girl in 'The Liberty Belles' the following year. Allowed to speak one line in 'Belles', she made up her mind to become a stage actress.

Elsie was quite beautiful, as well as talented, and she worked her way up from the chorus to become a Broadway star for three decades. She made her Broadway debut, proper, at the end of 1903 in the musical 'The Girl from Kay's' at the Herald Square Theatre. In 1904, she then appeared in the play 'The Second Fiddle'.

Between the time Elsie appeared on Broadway in the musical 'Miss Dolly Dollars' and in Arthur Conan Doyle's play 'The Brigadier', one of the major scandals that periodical rock America to its core occurred. On June 25, 1906, Pittsburgh millionaire Harry K. Shaw, the husband of Elsie's friend Evelyn Nesbitt, shot and killed renowned architect Stanford White. The press had a field day and dragged Elsie into the scandal revolving around the murder. A journalist revealed that Elsie had known about her friend Evelyn's affair with White, which brought unwanted attention.

Jon C. Hopwood at IMDb: "The two Thaw murder trials (the first one having ended with a hung jury) constituted the first "Trial of the Century" in that new century, and Elsie was anxious to avoid being subpoenaed as a witness as it might generate more bad publicity. To be tarred as one of the loose showbiz girls the press was reveling in, boosting its circulation while sanctimoniously condemning their immorality while covering their yellow pages with the skinny on their antics, could prove fatal to a career in those more-outwardly Puritanical times. Elsie accepted an offer to appear in 'The Earl of Pawtucket' at the London Playhouse in England, which proved to be a hit."

Returning to her home country, she appeared in melodramas on Broadway, such as Edgar Selwyn's 'Pierre of the Plains' in 1908. The next year, she was hailed for her performance in the title role of 'Such a Little Queen'. In the following decade, she became the 'Toast of Broadway' and earned the reputation as 'the most beautiful woman on the spoken stage.' Elsie rejected offers from film producers as she considered the primitive photoplays of her time to be inferior to the stage. She continued to act on Broadway, appearing in a string of successes, including the revival of 'Arizona'.

She distinguished herself playing Portia opposite Shylock of the great English tragedian Sir Herbert Beerbohm Tree in a 1916 production of 'The Merchant of Venice'. Elsie next appeared as the eponymous heroine of 'Shirley Kaye.' At this time, she surrendered to the blandishments of Paramount-Artcraft mogul Adolph Zukor, who had offered her a very lucrative three-year contract that would pay her $5,000 per week to appear in 18 films. 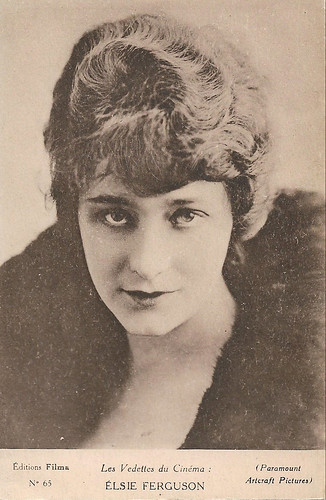 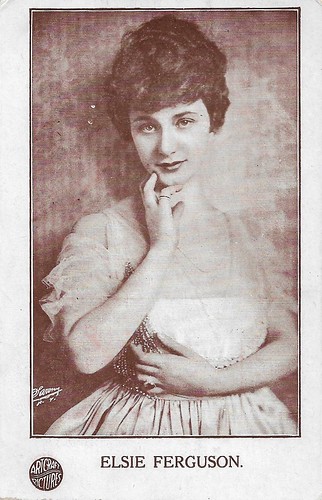 The Aristocrat of the Screen

Elsie Ferguson's first picture for Paramount was Barbary Sheep (Maurice Tourneur, 1917), which also featured the film debut of George M. Cohan, later immortalised on film by James Cagney in Yankee Doodle Dandy (Michael Curtiz, 1942). Initially, Elsie hated the experience, but she had a good working relationship with Tourneur, who became her favourite director during her relatively brief film career.

Tourneur predicted that Elsie would become a major star due to her beauty and talent. Barbary Sheep was a hit with critics and audiences, and Tourneur directed her next two pictures, The Rise of Jenny Cushing (Maurice Tourneur, 1917) and Rose of the World (Maurice Tourneur, 1918). In 1918, Tourneur also directed her as Nora Helmer in a cinematic adaptation of Henrik Ibsen's masterpiece 'A Doll's House'. It was the third film version of the play.

Marshall Neilan directed her in Heart of the Wilds (1918), a remake of her old stage hit 'Pierre of the Plains', while George Fitzmaurice directed her in four films. A fashion maven, Elsie earned the sobriquet 'The Aristocrat of the Screen' for her many portrayals of aristocrats and high society women in her pictures.

Elsie refused Paramount's offer for a new, more lucrative contract, and returned to the Broadway stage with the play 'Sacred and Profane Love' (1920), which was a huge hit. In 1920, she traveled to the Middle East and Europe. She fell in love with Paris and the French Riviera, and within a few years, she bought a permanent home there. Paramount managed to sign Elsie to a two-year, four-picture contract in late 1921, and she filmed a film version of her stage success, Sacred and Profane Love (William Desmond Taylor, 1921).

George Fitzmaurice directed her in a screen adaptation of George du Maurier's novel 'Peter Ibbetson' called Forever (1921), co-starring Wallace Reid. Containing her best screen performance, this third film of her two-year Paramount contract was a big hit, as was her last, Outcast (Chester Withey, 1922). She then returned to the Broadway stage in the 1923 hit 'The Wheel of Life', but she refused Paramount's offer of a new contract, which would have included filming her latest success. She instead appeared in 'The Grand Duchess and The Waiter' on Broadway.

Elsie would later take her 'Wheel' and 'Duchess' co-star, British stage actor Frederick Worlock, as her third husband. Earlier, she had been married to businessman and Adams Express Co. heir Frederick C. Hoey, then married bank executive Thomas Clarke, Jr. in the mid-1910s. Elsie divorced Clarke in the late 1920s, married Warlock, and then shortly divorced him in 1930. But that lay in the future.

After appearing in a supporting role to Adolphe Menjou and Norma Shearer in Broadway After Dark (Monta Bell, 1924) for Warner Bros., she made one more silent film, Vitagraph's The Unknown Lover (Victor Halperin, 1925), a film she detested and would never discuss. Elsie continued her stage career with great success throughout the decade but retired at the end of the 1920s.

Five years later, she appeared in First National Pictures' talkie Scarlet Pages (Ray Enright, 1930), based on the play of the same name that Elsie had appeared in on Broadway in 1929. The 47-year-old actress played a lawyer defending a young woman accused of murder. Elsie's speaking voice on film was lower-pitched than her fans expected, but she had clear and precise diction. It was her last film appearance.

Well known as difficult to work with, temperamental, and argumentative, she married four times. In 1934, the 51-year-old Elsie married wealthy Irishman Victor Augustus Seymour Egan. They bought a farm in Connecticut that same year, where she spent her retirement. They also maintained a home in France. Elsie came out of retirement to appear on Broadway in the 1943 production of 'Outrageous Fortune', which was a hit with the critics, but a flop at the box office, playing only 77 performances. She retired from acting for good, splitting her time between Connecticut and France.

Elsie's husband, Victor Egan, died in France in 1956. Widowed for five years, Elsie died at the age of 78 in 1961 in Lawrence Memorial Hospital in New London, Connecticut. She was interred in the Duck River Cemetery in Old Lyme, Connecticut. A very wealthy woman with no heirs and a lover of animals, her will left $1,000,000 to the Animal Medical Center in New York, NY, plus various sums to Bide-A-Wee, Orphans of the Storm, the American Society for the Prevention of Cruelty to Animals, and England's the Royal Society for the Prevention of Cruelty to Animals.

Only one of her silent films survives, The Witness For The Defense (George Fitzmaurice, 1919) in the Gosfilmofond Archive in Moscow. Jon C. Hopwood at IMDb: Her sole talkie, Scarlet Pages (Ray Enright, 1930), does exist and is part of the Time-Warner library of films. It occasionally is shown by the cable movie network Turner Classic Movies and remains the sole legacy of this great actress's spectacular career in the first part of the last century." 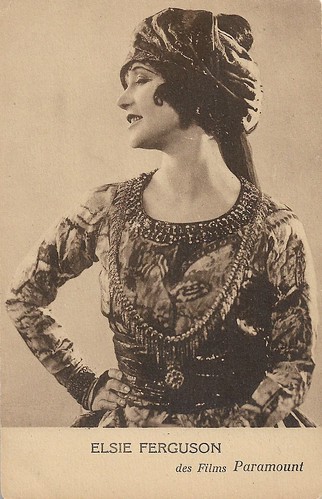 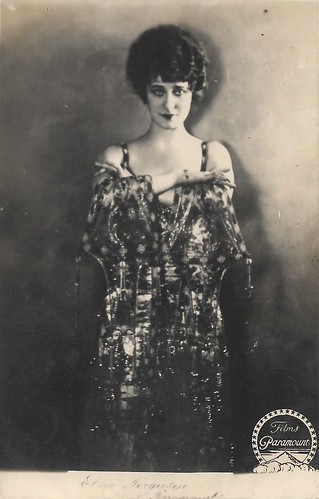