The Milanese company Rizzoli & C. in Milan was one of the most prominent publishers of film star postcards in Italy between 1936 and 1942. Through the years, Ivo Blom collected many of the wonderful Rizzoli cards with their glamorous portraits of famous actresses. In a series of posts, Ivo chooses his favourite Rizzoli cards and describes what happened in Italy in this turbulent period. Today, Part 4 about the year 1939. 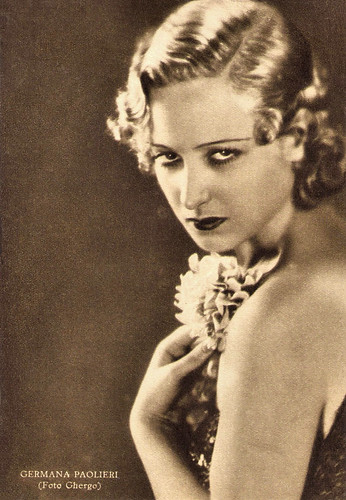 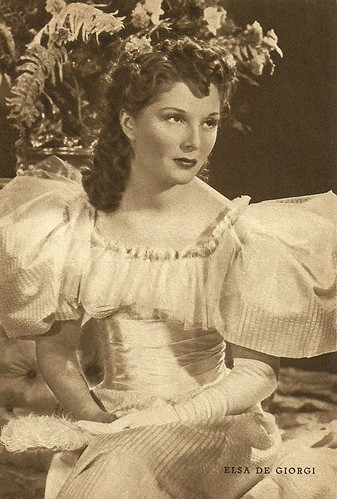 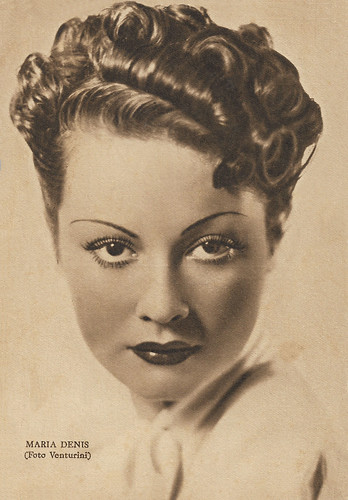 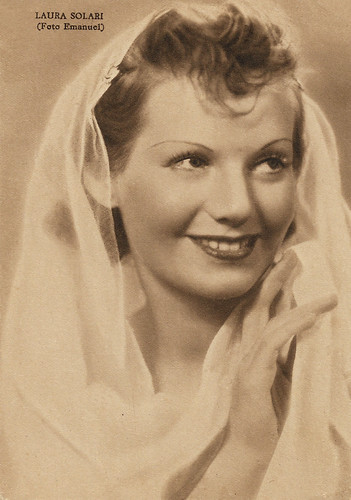 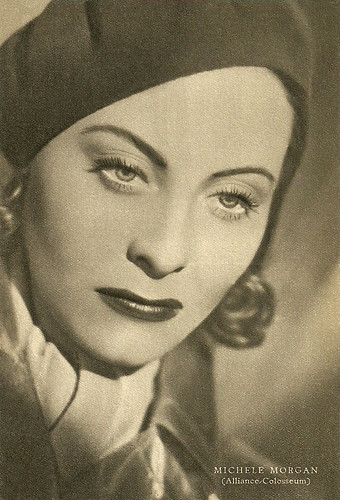 The tense situation before the war


In the year 1939, the Second World War broke out. On 1 September Germany invaded Poland and Britain and France declared war on Germany. However, Italy would not become belligerent before June 1940. France and Britain did not attack Germany either, so for ¾ years the ‘phony war’ lasted, while the Germans and the Russians made a non-aggression pact in August 1939 by which Poland was split up over Germany and the USSR.

Yet, the situation already had become tenser in early 1939 when Mussolini laid claim on the Mediterranean and the Balkan, referring to the Roman Empire of Antiquity. Explicit links between the First Rome of the Emperors and the Third Rome of Mussolini had already been made clear from the late 1920s onward, with the ‘clearing’ of Roman Antiquity sites such as the Forum and the Tomb of August from later buildings from the Second Rome, that of the papal times.

Mussolini also continued and increased the pre-Fascist era's desires for expansion and colonialism in North Africa. But in 1939 he wanted to break the British and French control of the Mediterranean area and invaded Albania to ease its overpopulation but also as a first step in conquering the Balkan. Italy and Germany signed the Pact of Steel to help each other militarily. However, Italy was way behind Germany’s military preparations for war.

1939 also signed the end of the Spanish Civil War (1936-1939) in which the Italian army extensively had helped Franco’s Nationalists to beat the Republicans. In hindsight, Italy made several propaganda films to boost morale such as Carmen fra i rossi (1939) and Alcazar (1940). Also, several Spanish actors would work in Italian film productions, such as Imperio Argentina, Conchita Montenegro, and Juan de Landa. Yet, when the war broke out in Italy 1940, and matters became tough, Spain seemed a relatively quiet place to work and live, so several Italian actors and directors went there and stayed until Italy was liberated.

Another country that stood out for its co-productions with Italy was France. Hoping not to be attacked by both Germany and Italy at the same time, the French state promoted co-productions with Italy and sent e.g. French director Jean Renoir to Rome, to make the film Tosca with Imperio Argentina, the Franco-Swiss actor Michel Simon and upcoming Italian star Rossano Brazzi. Shooting would only start in Spring 1940, and soon after the first days, Renoir fled the country when the war broke out. His assistant Carl Koch would take over and finish the film. 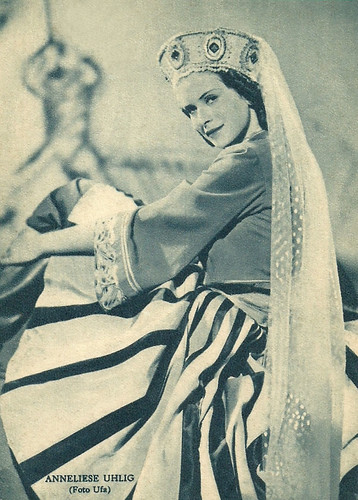 Anneliese Uhlig had her breakthrough in 1937-1938 with the German circus film Manege/Die Stimme des Blutes by Italian director Carmine Gallone. (IMDb lists the two films as separate ones but they are the same one). In 1939 Uhlig acted in four German films, Die Stimme aus dem Äther/The Voice from the Ether (Harald Paulsen, 1939), Der Vorhang fällt/The Curtain Falls (Georg Jacoby, 1939), Das Recht auf Liebe/The Right to Love (Joe Stöckel, 1939), and Verdacht auf Ursula/Suspected Ursula (Karl Heinz Martin, 1939). After having rejected Goebbels' advances in 1940, Uhlig was banned from film acting in Germany and proceeded to act in several Italian films, thanks to the mediation of her friend, singer, and actress Maria Cebotari. Yet, in 1943 she was called back to Germany. 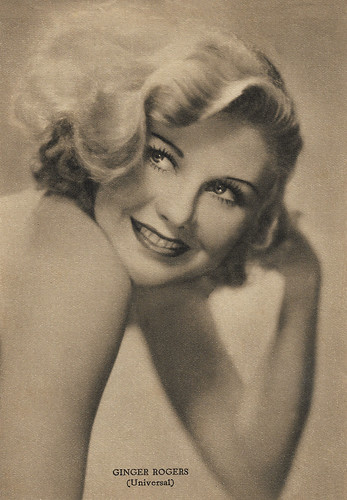 It is remarkable Rizzoli still released postcards with American stars after the Hollywood majors had withdrawn from the Italian market in early 1939. However, RKO was not among these majors, so the Fred Astaire & Ginger Rogers musicals by RKO could still be shown. Among these, e.g. Carefree (Mark Sandrich, 1938) and The Story of Vernon and Irene Castle (H.C. Potter, 1939). In 1938-1939 Rogers did also various films at RKO without Astaire, such as Having Wonderful Time (Alfred Santell, 1938) with Douglas Fairbanks jr., Bachelor Mother (Garson Kanin, 1939) with David Niven and Fifth Avenue Girl (Gregory La Cava, 1939) with Walter Connolly. 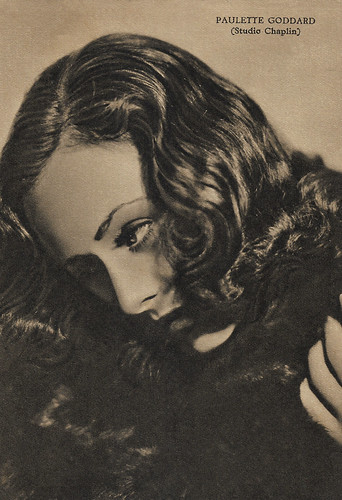 Paulette Goddard's breakthrough and claim of fame were of course Chaplin's Modern Times (1936), released in Italy in 1937 by United Artists. United Artists was not among the four Hollywood majors that withdrew from the Italian market. So when Goddard continued to act for United Artists in The Young in Heart (Richard Wallace, 1938), this could still be seen in Italy. In 1938 Goddard moved to MGM and afterward to Paramount. In 1940 she returned to United Artists for Chaplin's The Great Dictator. For obvious reasons (the film mocked Hitler and Mussolini), the film was shown in Italy first in June 1945, after the Liberation.


The Venice film festival signalled the tensions of the times. The Coppa Mussolini - the precursor of the Golden Lion attributed to the best national and foreign film between 1934 and 1942 - was given to the Italian propaganda film Abuna Messias/Cardinal Messias (1939) by Goffredo Alessandrini, which legitimised Italy’s war in Ethiopia of the 1930s, by narrating a tale that precedes the war. It portrays the life of Guglielmo Massaia (Camillo Pilotto), a nineteenth-century Italian known for his missionary work in the Ethiopian Empire, and having a good bond with king Menelik (Enrico Glori). The film was shot in Italian Oriental Africa, the then combined colony of Ethiopia, Eritrea and Somalia.

The Coppa Volpi for best male and female actor were not assigned in 1939. The Coppa della Biennale was given to five films. One was La Fin du Jour (Julien Duvivier, 1939) an homage to stage acting with Louis Jouvet, Michel Simon, Victor Francen, and Madeleine Ozeray. Another was Robert Koch, der Bekämpfer des Todes (Hans Steinhoff, 1939), starring Emil Jannings. A third was the British film The Four Feathers (Zoltan Korda, 1939), with John Clements and Ralph Richardson amidst colonial war in Sudan.

While the United States was completely absent in Venice, Germany instead was present with 28 films. These included Willi Forst’s Bel-Ami, with Olga Tschechowa and Forst himself. France had a smaller section but with memorable titles such as La Bête humaine (Jean Renoir, 1938), with Jean Gabin and Simone Simon, Le jour se lève (Marcel Carné, 1939), with Gabin and Arletty, and Jeunes filles en détresse (G.W. Pabst, 1939) with Micheline Presle and Marcelle Chantal. 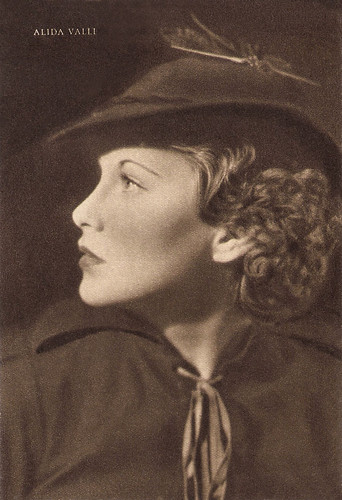 Both in 1938 and in 1939 Alida Valli could be seen in comedies and romantic dramas: L’ha fatto una signora/A lady made it (Mario Mattoli, 1938), L’amor mio non muore!/A Night in May (Giuseppe Amato, 1938), and La casa del peccato/The house of sin (Max Neufeld, 1938), and Mille lire al mese/One thousand lire per month (Max Neufeld, 1939), Ballo al castello/Ball at the Castle (Max Neufeld, 1939), and Assenza ingiustificata/Absence Without Leave (Max Neufeld, 1939). Mille lire al mese not only launched a popular song, but it was also one of those late 1930s Italian films reflecting on the upcoming medium of television. Yet Valli’s recognition as a dramatic actress would come first with Piccolo mondo antico/Old-Fashioned World (Mario Soldati, 1941). 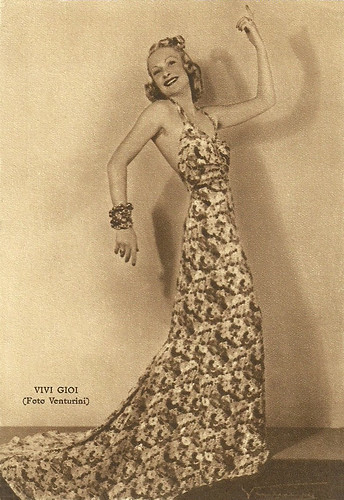 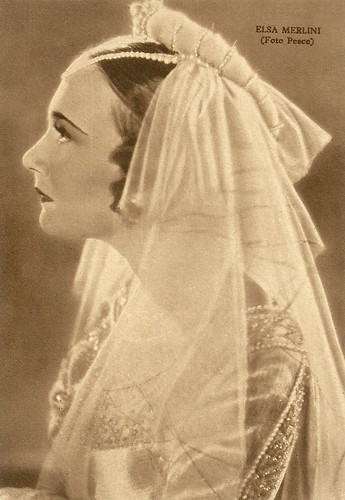 Elsa Merlini acted in three films in 1938: L’albero di Adamo/Adam's Tree (Mario Bonnard, 1938) with Antonio Gandusio, Amicizia/Friendship (Oreste Biancoli, 1938) with Nino Besozzi, and La dama bianca/The White Lady (Mario Mattoli, 1938), again with Besozzi. In 1939 she was in only one film Ai vostri ordini, signora..., with Vittorio De Sica as a man who poses as the lover of a rich widow (Merlini, of course). 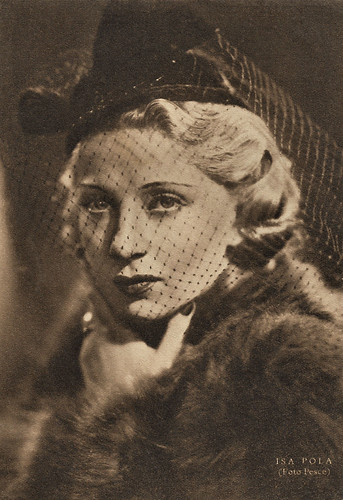 Isa Pola acted in two films in 1939. She starred in La vedova/The Widow (Goffredo Alessandrini, 1939) with Leonardo Cortese, while she played Santuzza in Cavalleria rusticana (Amleto Palermi, 1939), also with Cortese as Turiddu, Doris Duranti as Lola, and Carlo Ninchi as Alfio. Pola didn’t act in film in 1938. 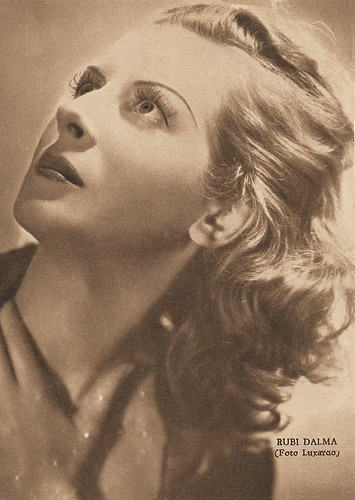 After her breakthrough in Il signor Max/Mister Max (Mario Camerini, 1937), Rubi Dalma (or D'Alma) acted in 1938 in L'argine/The Dyke (Corrado D'Errico, 1938) and L’allegro cantante/The Merry Singer (Gennaro Righelli, 1938), and in 1939 in Uragano ai tropici/Hurricane in the tropics (Pier Luigi Faraldo, Gino Talamo, 1939) and Camerini’s Batticuore/Heartbeat (Mario Camerini, 1939). The latter was, just like Mille lire al mese, a comedy in which the early stage of television is mocked. In Batticuore the leads were for Assia Noris (the female star from Il signor Max), playing a spying pickpocket involved in diplomatic scandals, and American actor John Lodge, who did various film in Europe in the 1930s and was married to actress Francesca Braggiotti. 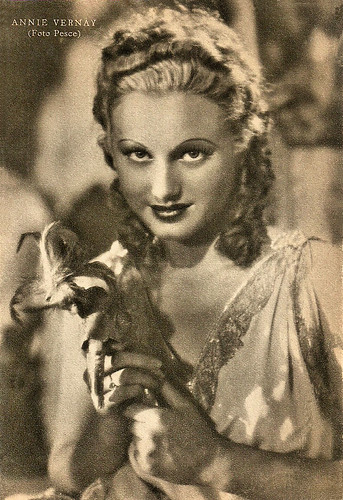