Ettore Manni (1927-1979) was a Dark, rugged, and exceedingly good-looking Italian film and television actor, who appeared in 107 films between 1952 and 1979. While he was the handsome lead in the fifties, he became a character actor in the sixties. His last role is also his best-known performance, the despicable Katzone in Federico Fellini's La città delle donne/City of Women (1979). Manni suddenly died because of a freak accident. 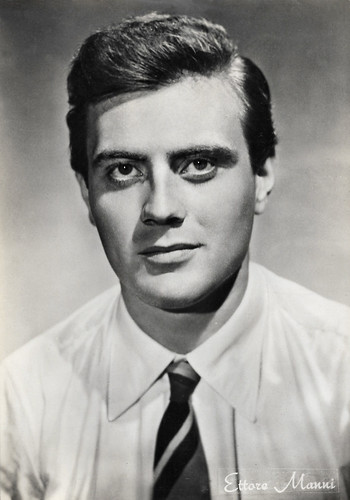 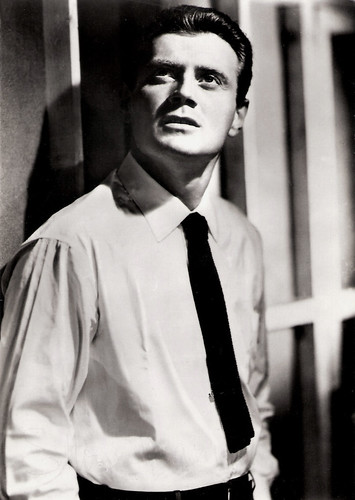 A handsome and powerful student


Ettore Manni was born in Rome in 1927. He was motherless since birth. In 1952, Manni was noticed by director Luigi Comencini, who was struck by this handsome and powerful out-of-school university student.

He made his film debut as the protagonist of La tratta delle bianche/Girls Marked Danger (Luigi Comencini, 1952), alongside divas such as Eleonora Rossi Drago, Silvana Pampanini, Tamara Lees and a very young Sophia Loren. In that film, Manni's name appeared in the credits before those of Vittorio Gassman and Enrico Maria Salerno.

This marked the beginning of an intense and successful season for Manni. He interrupted his university studies and became in a short time one of the most popular actors in Italian cinema. The Roman actor ranged from the dramatic roles that characterised his debut - he starred in Le amiche/The Girlfriends (1955) by Michelangelo Antonioni and La lupa/She-Wolf (Alberto Lattuada, 1953) - to parts in comedies, Peplums, and Spaghetti Westerns.

In the comedy Poveri ma belli/Poor, But Handsome(Dino Risi, 1957), he played Ugo, the fiancé of Giovanna (Marisa Allasio). In Ladro lui, ladra lei (Luigi Zampa, 1958), he was the merchant who saves Cesira (Sylva Koscina) by stealing her from the thief Cencio (Alberto Sordi). And in Marisa la civetta (Mauro Bolognini, 1957) and Susanna tutta panna (Steno, 1957) he found Marisa Allasio as his co-star again. 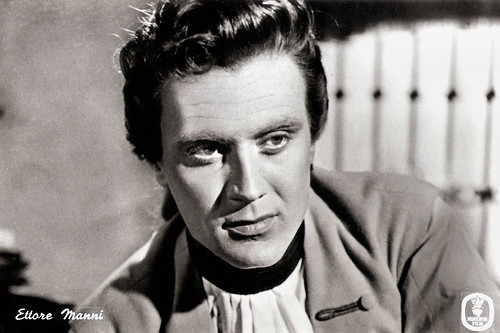 
With the passing of time, Ettore Manni considerably weighed down, and his charm was no longer that of his early days. Although he continued to work intensely in numerous films, Manni was gradually relegated to roles as a character actor or a negative character. He definitively lost the image of the handsome and charming protagonist of the fifties and sixties.

He also made several films for television, notably the TV Mini-Series Orlando furioso/The Frenzy of Orlando (Luca Ronconi, 1974), Il nero muove/Black moves (Gianni Serra (1977), and Circuito chiuso/Closed Circuit (Giuliano Montaldo, 1978), in which a man is shot dead in his seat during a matinee screening of a Giuliano Gemma Spaghetti Western, prompting the police to close off the cinema in an attempt to gather evidence.

His last performance and perhaps artistically the most significant was in Federico Fellini's film La città delle donne/City of Women (1979), in which he played the despicable Dr. Xavier Katzone. Amid Fellini's characteristic combination of dreamlike, outrageous, and artistic imagery, Marcello Mastroianni plays Snàporaz, a man who voyages through male and female spaces toward a confrontation with his own attitudes toward women and his wife. Snaporaz visits Katzone's grotesque house, with a mausoleum-like tunnel containing what is essentially the 'essence' of Katzone's numerous past conquests. The scene is a never-obvious send-up of machismo.

Fellini's film was released the following year, after Manni's sudden death in July 1979 at the age of 52. Ettore Manni had been married to the French actress Mireille Granelli who had worked with him in Ursus, il terrore dei kirghisi/Ursus, the terror of the Kyrgyz (Antonio Margheriti, 1964). The couple had a daughter.

Later, Manni was the partner of Austrian-born actress Krista Nell. Sadly, Nell was diagnosed with leukemia and lost her battle against the disease in Rome in 1975. She was only 28. The grief-stricken Manni suffered from chronic depression following her death but continued to work. Wikipedia writes that while Manni was cleaning a rifle from his gun collection, an accidental bullet hit his leg and the actor bled to death. At IMDb, Gary Brumburgh tells another story: "Much now has been said over the controversy of the actor's untimely death on July 27, 1979, in Rome. It was originally believed that the 52-year-old Manni, an avid gun collector, accidentally shot himself in the groin while cleaning or handling a gun. It is now believed he committed suicide." 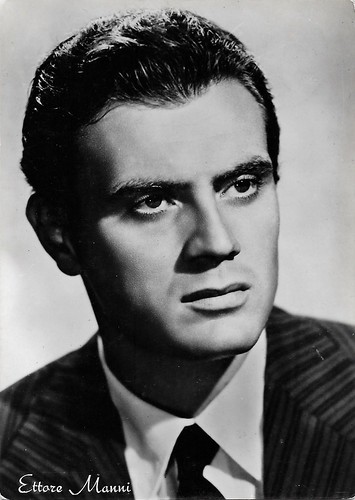