Les Fratellini or the Fratellini brothers was a legendary clown trio whose wit, charm, and superb acting techniques were widely admired in Europe. Paolo or Paul, the poetic whiteface François, and the very wild and crazy Albert came from an illustrious circus family and were the Toast of Paris between the two world wars. They also performed in a few films. Paul's granddaughter Annie Fratellini (1932-1997) later also became a circus artist, singer, and film actress. She was one of the few female circus clowns in France and the founder of the first circus school in the country. From 1969, she was married to filmmaker and actor Pierre Etaix, and together they appeared in Fellini's I Clowns (1970), which also commemorates Les Fratellini. 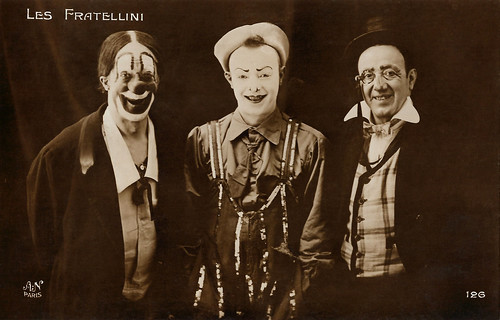 French postcard by A.N., Paris, no. 126. From left to right, Albert, François, and Paolo (Paul) Fratellini. 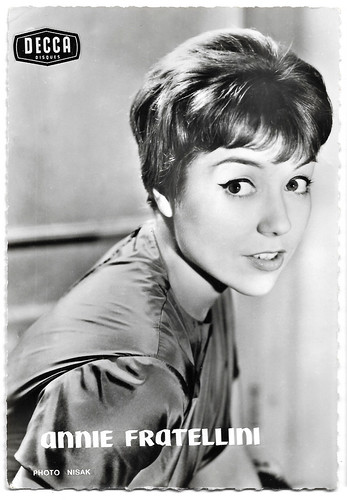 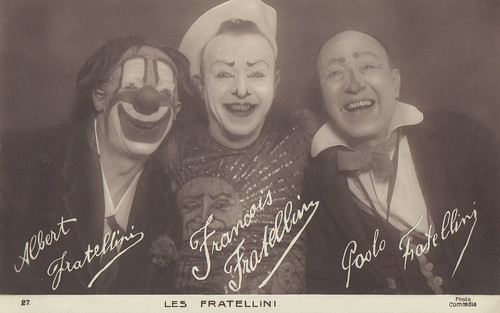 Their father, Gustavo Fratellini (1842–1905), was a Florentine follower of the Italian patriot Giuseppe Garibaldi and took part in the unification of Italy. Gustavo was a circus trapeze artist and acrobat, and his eldest son Luigi or Louis (1867–1909), later worked as a clown with his brother Paul. François and Albert also began their careers as a pair. When Louis died in 1909 he left a family without support and Paul without a partner.

To solve both problems the remaining brothers formed a unique triple act: François retained his traditional role as the white-faced clown; Albert, as the hapless, ragged Auguste, designed grotesque new makeup with high black brows, an exaggerated mouth, and a bulbous red nose (a makeup style that influenced countless subsequent clowns); and Paul joined the act in a new role, the notary, with little makeup and a comic style midway between those of his brothers. The Fratellinis toured Europe and Russia.

The Fratellini brothers appeared in a few films. In 1905, they could be seen in the silent short L'éléphant acrobate/Acrobatic Elephant (1905), produced by Pathé Frères. It was followed by two other shorts for Pathé Frères the next year, Automobile et cul-de-jatte/Motorcar and Cripple (Ferdinand Zecca, 1906) and Bicyclette présentée en liberté/The Riderless Bicycle (Gaston Velle, 1906).

During World War I, the Fratellini brothers joined the Cirque Medrano in Paris. Their engagement at the Circus Medrano was so successful that it sparked a strong resurgence of interest in the circus. The wit, charm, and superb acting techniques of the three Fratellini brothers were widely admired. They were lauded in print and worshipped by adoring fans who would show up at the circus just in time for the Fratellini entree, which sometimes ran as long as forty-five minutes.

By 1923 they were the toast of Paris, admired by the general public and by such intellectuals as the playwrights Raymond Radiguet and Jean Cocteau, both of whom created characters based on the Fratellinis. Les Fratellini returned to the screen in the silent feature Rêves de clowns/The Dream of the Clowns (René Hervouin, Madame Vigier de Maisonneuve, 1924) with Georges Melchior. They played three famous clowns who are puzzled by a single woman in the audience who seems to find their act not funny.

François Fratellini originally played Pierrot the clown in the final film of Sarah Bernhardt, La voyante/The Clairvoyant (Leon Abrams, 1924). Pierre offered shelter to Jean Detaille (played by George Melchior), but when Sarah Bernhardt died, production was halted. It was later decided that the film could be finished with Jeanne Brindeau acting as a double for her. By then, Fratellini had given up the part, which was rewritten for Jean-François Martial as a painter. 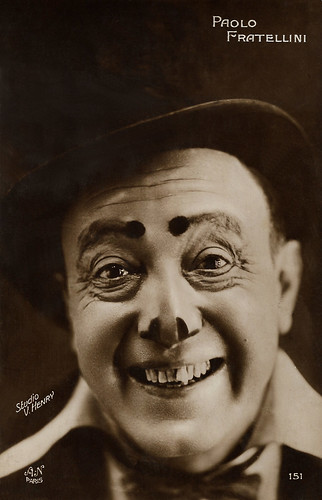 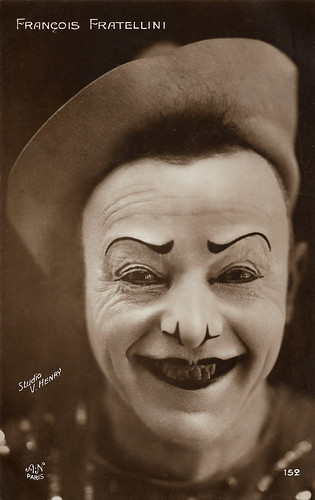 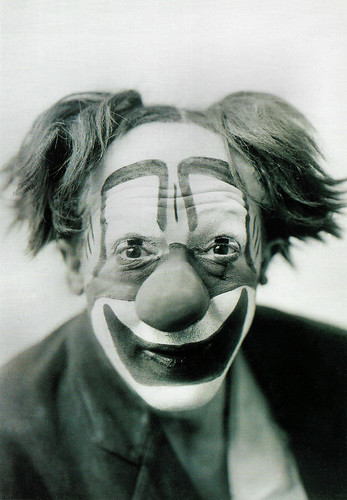 
Annie Violette Fratellini was born in 1932, in Algiers, French Algeria, where her parents, who were circus performers, were touring. Her father was Victor Fratellini, a clown and acrobat; her mother, Suzanne (née Rousseau), was the daughter of Gaston Rousseau, the director of the Cirque de Paris, a huge circus building located Avenue de la Motte-Picquet in Paris that was active from 1906 to 1930. Her grandfather was Paul Fratellini, one of the three clowns of the famous Les Fratellini.

Although Annie made her debut in the ring at age 13 at the famous Cirque Medrano in Paris, she eventually ran away from the circus when she was 18 years old, and begun a music-hall and recording career as a musician and singer. She also became a film actress. She was Mado Petits Pieds, the waitress in Louis Malle's imaginative illustration of Raymond Queneau's Zazie dans le métro (1960). She also appeared in La Métamorphose des cloportes/Metamorphosis of the Woodlice (1965) a film directed by Pierre Granier-Deferre, whom she had married in 1954. They had one daughter, Valérie.

In 1969, Annie Fratellini starred in Pierre Étaix's funnily poetic Le Grand Amour/The Great Love (Pierre Etaix, 1969). They fell in love and married that same year. Pierre Étaix (1928–2016), who had been a comedian and Jacques Tati's assistant before becoming a filmmaker himself. Etaix was directly inspired by Max Linder and Buster Keaton and kept the tradition of slapstick alive. In the 1960s he made a series of acclaimed short- and feature-length films, many of them co-written by Jean-Claude Carrière. He won an Academy Award for their short film Heureux Anniversaire/Happy Anniversary (Pierre Etaix, 1962). Due to a legal dispute with a distribution company, these films were unavailable for three decades. As an actor, assistant director, and gag writer, Étaix worked with Jacques Tati, Robert Bresson, Nagisa Oshima, Otar Iosseliani, and Jerry Lewis.

Pierre had a passion for the circus and clowns and Annie had an inherited talent for comedy, so Pierre convinced her to take it seriously. Together, they created a classic European clown duo in which Étaix was the Clown to Fratellini's Auguste (the comic character of the duet). They made their debut on tour with the French Cirque Pinder. In 1975, Étaix and Fratellini opened the École Nationale du Cirque, one of Paris's (and Europe's) first two professional circus schools, and created the Nouveau Cirque de Paris, an intimate, high-end traveling circus that was the performing arm of the school, and in which they regularly performed their act.

Pierre Étaix and Annie Fratellini divorced in 1987, and Annie continued to run the school and the circus, performing her clown act with her daughter, Valérie. The school has become the Académie Fratellini, one of France's two major state-sponsored circus schools. Annie Fratellini died from cancer in 1997, at Neuilly-sur-Seine and is buried at the Cimetière de Montmartre in Paris, France, near the other members of her illustrious family. 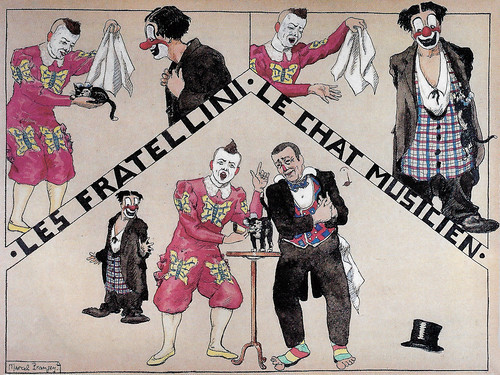 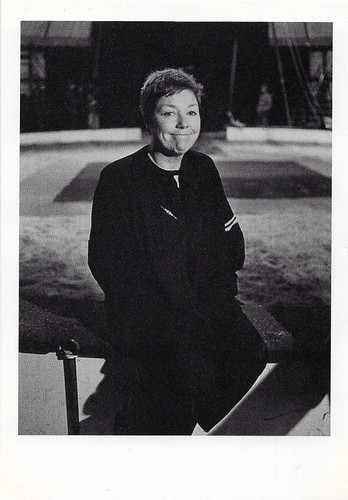 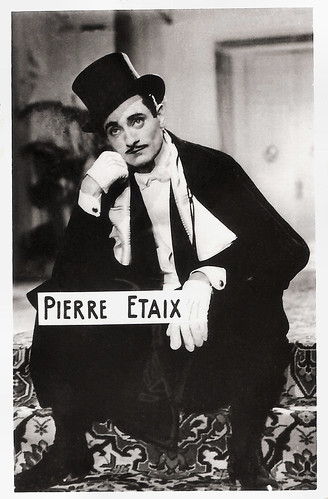 Romanian collectors card. Photo: Pierre Etaix in Yoyo/Yo Yo (Pierre Etaix, 1965). Yoyo/Yo Yo is seen as Etaix's masterpiece. He plays a spoilt millionaire who loses everything in the Wall Street crash, then finds his former sweetheart, a circus horse rider, and their son Yoyo, a budding clown. 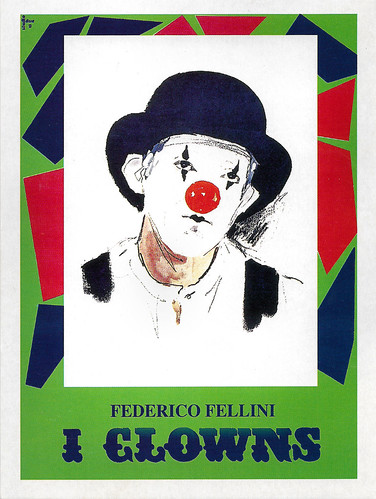 Italian postcard in the Federico Fellini series by Gruppo Prospettive. Film poster by Rinaldo Geleng for I clowns/The Clowns (Federico Fellini, 1970). Both Pierre Etaix and Annie Fratellini were featured in Federico Fellini’s semi-documentary I clown (1970) about the human fascination with clowns and circuses. Fellini also reconstructed one of the acts of Les Fratellini for this film.