Arkady Raikin (1911-1987) was a very popular Soviet stand-up comedian, theatre and film actor, and stage director. Raikin developed his own pantomime style from various elements of theatre, operetta and cabaret and is often called the "Russian Chaplin". He starred also in several films. 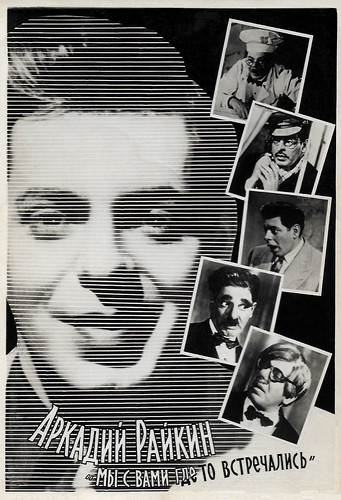 Soviet postcard by FK, Rostovdon, no. 60, 1960. This postcard has been distributed in 100.000 copies. The retail price was 75 Kop. Photos: stills from the film My s vami gde-to vstrechalis/Did We Meet Somewhere Before (Nikolay Dostal, Andrey Tutyshkin, 1954). 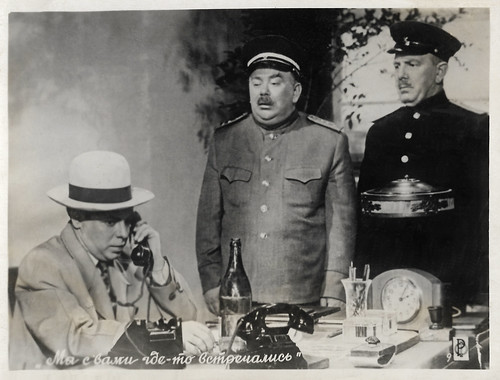 Soviet postcard, no. AX 07282. Retail price: 60 K. The right side of the card is cut off by a former owner. Photo: Arkady Raikin (left) and Mikhail Yanshin (middle) in My s vami gde-to vstrechalis/Did We Meet Somewhere Before (Nikolay Dostal, Andrey Tutyshkin, 1954).


Arkady Isaakovich Raikin (Russian: Аркадий Исаакович Райкин) was born in 1911 into a Jewish family in Riga, in the Governorate of Livonia of the Russian Empire (present-day Latvia). His father, Isaak Raikin, was a scaffolding brakeman at the Riga seaport, and his mother Lea Raikina (née Gurevich) was a midwife. The family also included younger sisters Bella and Sofia, and brother Max.

When he was five years old, his parents took him to Rybinsk, as the First World War was in full swing and German troops were getting dangerously close to Riga. At school, he became interested in the theatre and was involved in a drama club. In 1922 the family moved to Petrograd (St. Petersburg was formerly known as Petrograd (1914–1924) and later as Leningrad (1924–1991)). He studied at one of the oldest schools of Petrograd number 206.

In 1929 he got a job as a laboratory assistant at the Okhta Chemical Plant, an explosives factory. Against his parents' wishes, he applied at the Leningrad Technical School of Stage Art (now the Russian State Institute of Stage Art) where his classmate was actor Georgi Zhzhyonov. He originally enrolled on the course of the directors Grigori Kozintsev and Leonid Trauberg, but his exam results led him to the workshop of Vladimir Soloviov, a specialist in Italian popular theatre, particularly Commedia dell'arte, and the theatre of Molière. At the same time, he took private lessons in pantomime and stage expression with actor Mikhail Savoyarov, the "king of humour" of the 1910s.

After graduating in 1935, Raykin joined the Leningrad Theatre of Young Workers (TRAM), which was soon transformed into the Leninskij Komsomol Theatre (now the Baltic House Theatre). At that time Raykin also had begun his film career by playing small roles, often uncredited, such as in Pervyy vzvod/The First Platoon (Vladimir Korsh, 1933) with Fyodor Nikitin. In the next years, he worked in both state theatres and variety shows.

In 1939, he won the 1st All-Union competition of entertainers in Moscow, performing two dance-mimic musical numbers 'Chaplin' and 'Mishka' (Little Bear). During his later career, Raikin would often be compared with Charlie Chaplin. Steve Shelokhonov at IMDb: "His great acting talent unfolded in stand-up comedy. His hallmark monumentalism, his razor-sharp wit, and free-spirited humour won him the love of millions."

In 1939, Raykin acted in two films: Ognennye gody/The Fiery Years (Vladimir Korsh, 1939) and Doktor Kalyuzhnyy/Doctor Kalyuzhny (Erast Garin, Khesya Lokshina, 1939). However, his film career would be less successful than his stage career. That year he started to work as an actor at the Leningrad Variety and Miniature Theatre (now the Raikin Variety Theatre) and he became its artistic director in 1942. He discovered and invited comedians such as Mikhaïl Jvanetski, Roman Kartsev, and Viktor Iltchenko to his company.

In such plays as 'Cup of Tea' (На чашку чая, 1940), Raikin developed his own pantomime style from various elements of actor's theatre, operetta, and cabaret, which made him internationally known. Even though pantomime was his main art, he did not renounce words and singing and could change his appearance quickly. This also made him very successful as a satirist and comedian and he made fun of the Communist bureaucracy and the Soviet way of life. Wikipedia: "In the Stalinist police state, this was prone to danger, as it was not uncommon to get purged not only for telling a casual joke but even for not reporting it to the authorities." The Jewish director and actor was closely monitored by the censors, but his relations with the leaders, and in particular with Leonid Brezhnev, ensured him certain protection. 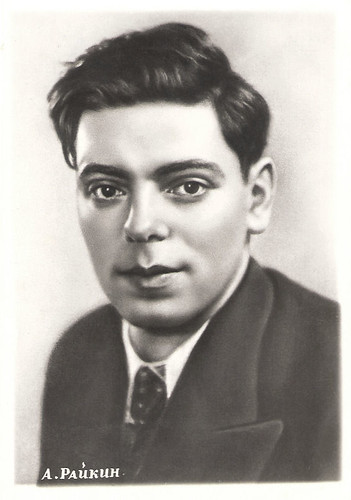 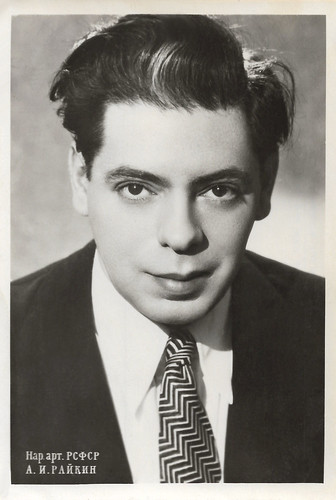 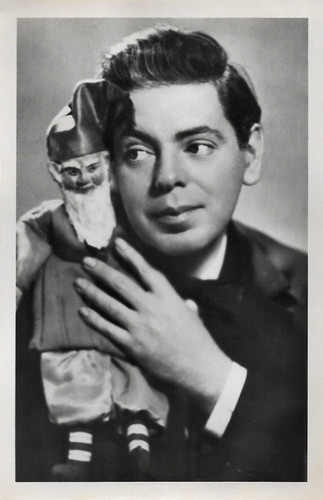 Lifting the spirits of the survivors in Leningrad


Arkady Raikin appeared in several stage comedies during the second world war, including 'Do not pass by' and 'Frankly speaking', which he created with writer-satirist V.S. Polyakov. His witty performances helped to lift the spirits of the survivors in Leningrad, while the city was besieged by the Nazis. He also gave several concerts for the Red Army soldiers, who were fighting the Nazis on the front line. For this and his courage, he was decorated with the medal "For the Defence of the Caucasus".

One of his most famous and successful productions after the war was 'The Voyage Around the World in 80 Days' (1951), based on Jules Verne. He produced more than 25 productions, toured all socialist countries. In addition to his theatre work, he sometimes appeared in films like My s vami gde-to vstrechalis/Did We Meet Somewhere Before (Nikolay Dostal, Andrey Tutyshkin, 1954).

He created an array of popular satirical characters, some of which were featured in the TV serial People and Mannequins. His radio and TV appearances and audio recordings were immensely popular. He performed to consistently "sold out" audiences and toured all over the former USSR. He launched the careers of several other prominent stand-up comedians, such as Mikhail Zhvanetsky and Roman Kartsev.

From 1957 on, he toured throughout Central and Eastern Europe and performed at the International Festival of Pantomime in Western Berlin (1962). He was such a success that he was invited to participate in the opening night of BBC Two television in 1964. He combined his trip to London for the BBC broadcast with a tour through Great Britain during which he was reunited with his British cousin, pianist Bruno Raikin. It marked the first of only two times when the Soviet government permitted him to perform in the West. Raikin maintained good working relationships with Marcel Marceau and some other foreign actors.

In 1969, he staged 'Traffic Light' with Mikhail Zhvanetsky. His relationship with the Leningrad party authorities began to deteriorate during his later years, and he asked Leonid Brezhnev for permission to move with his theatre to Moscow. In 1982, the theatre was in Moscow renamed the State Theatre of Miniatures. In April 1987, it was renamed 'Satirikon' (since 1992 the theatre is named after 'A.I. Raikin'), now run by his son Konstantin Raikin, also an acclaimed actor.

His wife, Roma, played a major role in guiding Raikin's career, and his daughter, Ekaterina, also had a successful career as a Moscow actress. For a month during the summer of 1987, Raikin hosted his American cousin, Washington D.C. attorney Steven Raikin, as a guest in his Moscow flat. In September 1987 the Soviet Ministry of Culture finally permitted Raikin to visit the United States, where, with his son and daughter, he gave emotional farewell performances in several cities to adoring audiences of Russian émigrés.

Arkady Raikin passed away in Moscow in 1987 at the age of 76 and is buried in the Novodevichy cemetery. Raikin was awarded the title of People's Artist of the USSR in 1968, the State Lenin Prize in 1980, and also received the highest civilian award in the Soviet Union, the Hero of Socialist Labour in 1981. The asteroid (4518) Raikin, discovered on 1 April 1976 in Nautchnyi by Nikolai Chernykh, bears his name. A stamp with his image was issued in Russia in 2001. Till today, Arkady Raikin's films and records remain popular in Russia. 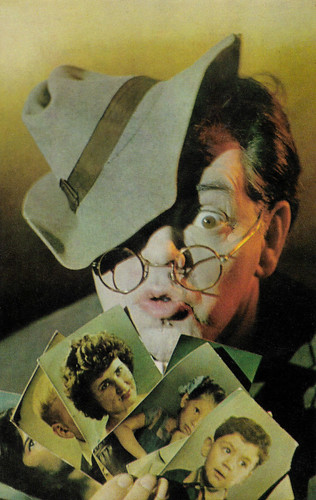 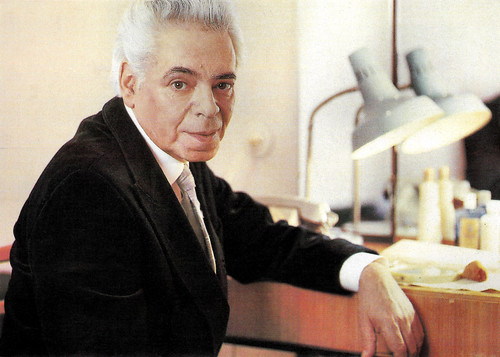