Gustaf Gründgens (1899-1963) was one of the most famous and influential but also controversial German actors and artistic directors of the twentieth century. He launched himself as a comet during the Weimar Republic. His most beautiful role was Mephisto, the devil in Goethe's 'Faust'. With that role he celebrated triumphs. His best-known film role was the criminal 'Der Schränker' (The Safecracker), the chief judge of Peter Lorre's character in Fritz Lang's M – Eine Stadt sucht einen Mörder/M (1931). After 1933, Gründgens became the stage favourite of the Nazi top. Although Reich Propaganda Minister Joseph Goebbels hated the homosexual Gründgens to the bone, Field Marshal Hermann Göring protected him personally. In 1946, Gründgens again acquired an important position in the German theatre. He triumphed in Berlin, amidst returned exiles and survivors from the concentration camps and was again respected as an actor. 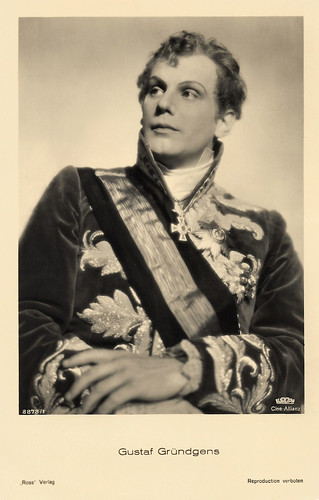 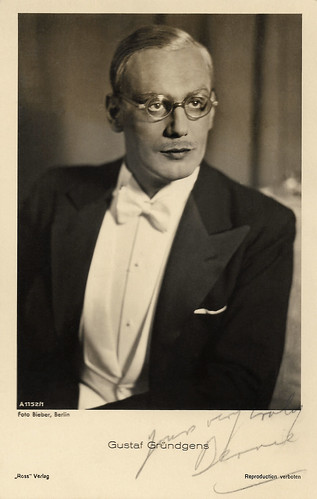 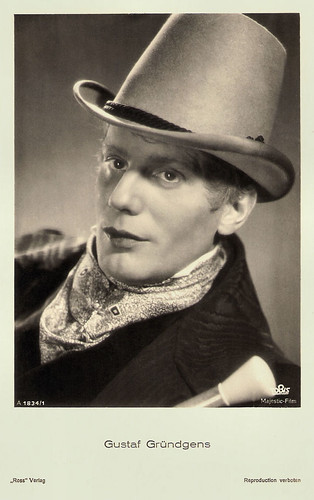 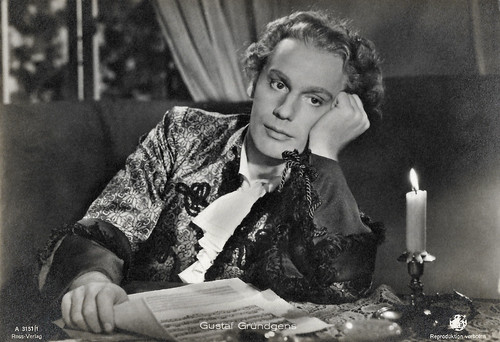 
Gustav Heinrich Arnold Gründgens was born in Düsseldorf in 1899, ten days before the turn of the century. The Gründgens family (the father descended from a Dutch family) was already in serious financial problems when Gründgens was born.

The young Gustaf Gründgens volunteered for the military in 1916, immediately after secondary school, and was sent to the Westfront. In 1917 he became a member of the front theater company Saarlouis, one year later he managed this company. He completed his training at the drama school of the Schauspielhaus Düsseldorf in one year, 1919-1920. A month later, he made his first appearance as a footman in Tolstoy's 'The Living Corpse'.

Via smaller theatres in Halberstadt, Kiel (where he played Mephisto for the first time) and a short engagement in Berlin, Gründgens ended up in 1923 at the Kammerspiele in the second important German theatre city of those days, Hamburg. From the age of twenty-five, Gründgens had to support his parents completely on his own financially.

In Hamburg, he met Klaus and Erika Mann. He directed the curious teenage fairy tale 'Anja und Esther' in which Klaus Mann and Gründgens played parts, and which was considered a scandalous performance for that time. He married Erika Mann in 1925 (or 1926 - the sources differ) and the marriage lasted three years.

In a short time, Gründgens became too big for Germany's second-largest theatre city. In 1928, Max Reinhardt engaged him for the Deutsches Theater on Berlin's Schumannstrasse. Gründgens plunged into Berlin theatre life with boundless energy. He tackled everything he could get: film, revue, cabaret, big stage roles.

One of his first film roles is the gangster leader 'Der Schränker' (The Safecracker) who is the chief judge of the kangaroo court presiding over Hans Beckert (Peter Lorre) in Fritz Lang's timeless classic M – Eine Stadt sucht einen Mörder/M (1931).

In 1932, the Berliners saw Gründgens for the first time as Mephisto in 'Faust I', in the Staatliches Schauspielhaus am Gendarmenmarkt opposite Werner Krauss in the title role. Critic Herbert Ihering wrote in the Berliner Börsen Courier (3 December 1932): 'Gründgens flashes and sparks. He plays a hundred variations on the Mephisto theme, but never the theme itself. He plays commentary on Mephisto, witty footnotes, against the Goethe exegetes.' 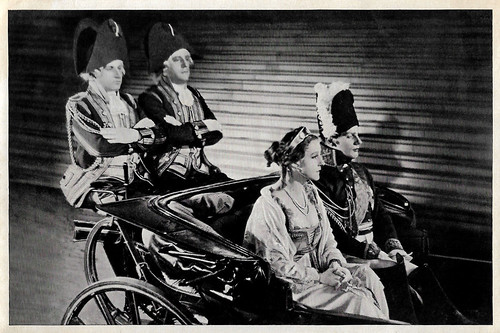 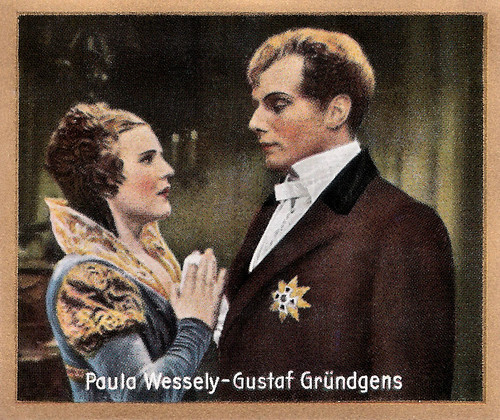 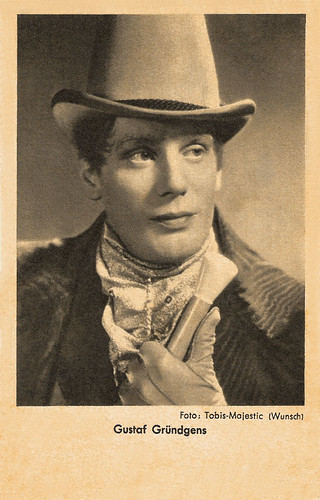 
In 1933, after the seizure of power by Hitler et al., and the fire in the Reichstag, many artists left Germany. Thomas Mann's children call their father in Switzerland and tell him to stay there. Klaus and Erika Mann themselves started the anti-fascist cabaret 'Die Pfeffermühle'(the Pepper Mill), with which they celebrated triumphs all over Europe.

Gustaf Gründgens stayed in Germany. In the summer and early autumn of 1933 Gründgens made a film in Spain. In October 1933 he returned to Berlin to play a leading role in Hermann Bahr's comedy 'Das Konzert', alongside Emmy Sonnemann, Mrs. Göring. Hermann Göring, who had become Prime Minister of Prussia, was looking for a new Intendant for the 'Preussisches Staatstheater' and his wife pointed out Gründgens' leadership qualities.

Gründgens was appointed to that position for the 1934-1935 season. Joseph Goebbels was furious and contacted Hitler about Gründgens and his alleged homosexuality. Göring took the longest straw. The general dismissed the argument of Gründgens' alleged homosexuality with the sentence: 'I decide who is a faggot'.

Gründgens formed a brilliant ensemble with actors like Werner Krauss, Kurt Meisel, Bernhard Minetti and Heinz Rühmann, and actresses like Marianne Hoppe and Pamela Wedekind. He also became a member of the Presidential Council of the Reichstheaterkammer (Theatre Chamber of the Reich), which was an institution of the Reichskulturkammer (Reich Chamber of Culture).

In 1936, Gründgens married the famous German actress Marianne Hoppe. Despite this "lavender marriage", Gründgens was widely known as homosexual, according to Wikipedia.

In the 1930s Gustaf Gründgens increasingly alienated himself from his progressive circle of friends from the Weimar Republic. Klaus Mann wrote a novel about a career fighter in the Third Reich with Gründgens as a metaphor. Klaus Mann had had a short-lived relationship with Gründgens, and the novel was said to resemble an act of personal revenge.

In 1936, 'Mephisto - Roman einer Karriere' was published in Amsterdam. The qualifier 'key novel' will haunt the book of Mephisto well into the 1970s. The novel remained banned in Germany until more than thirty years after the victory over the Nazis. Gründgens's adopted son and heir Peter Gorski, who had directed Faust, successfully sued the publisher on his late father's behalf in 1966.

The judgment was upheld by the Federal Court of Justice in 1968. In the time-consuming lawsuit, the controversy over libel and the freedom of fiction from censorship was finally decided by the Federal Constitutional Court in 1971. It ruled that Gründgens's post-mortem personality rights prevailed and upheld the prohibition imposed on the publisher.

However, the novel met with no further protests when it was published again in 1981 by Rowohlt. The novel was made into the film Mephisto (István Szabó, 1981), with Klaus Maria Brandauer in the role of Hendrik Höfgen. The film was a huge commercial and critical success and won the Academy Award for Best Foreign Language Film in 1981. 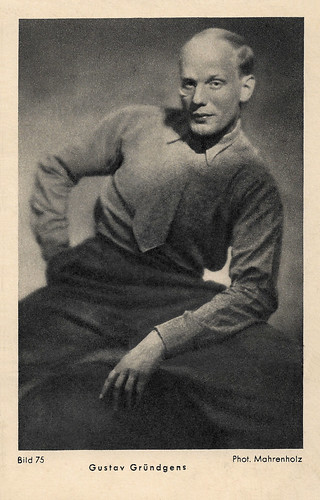 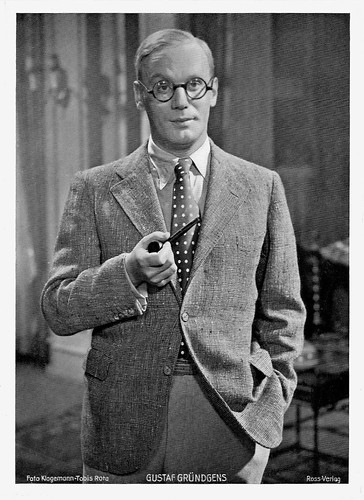 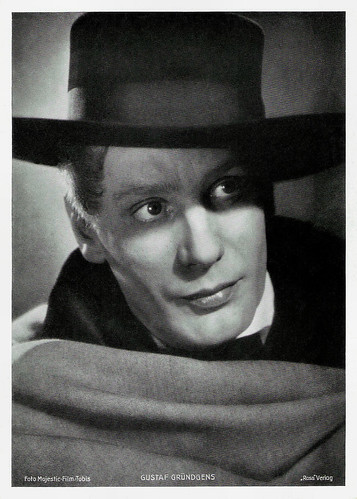 To continue to prevent worse and to help individuals


Loek Zonneveld wrote in a 1995 article in the Dutch magazine De Groene Amsterdammer: "Of course Gründgens' overt flirtations with the barbarians are unpalatable. And of course, it is quite wrong that through his theatre he provided the Nazis with an aesthetically and artistically sound civilizational alibi, as it were.

But that is why Gründgens' argument (to continue to prevent worse and to help individuals) cannot simply be thrown into the trash by means of the tight right/wrong scheme. First of all: Gründgens has helped, supported, and rescued people from the hands of the Nazi executioners.

When the anti-Semitic paper Der Stürmer by Julius Streicher starts a smear campaign in September 1934 against the 'verjudung' of the theatre in Gründgens' birthplace Düsseldorf, in particular by attacking the actress Louise Dumont (wife of his former teacher Lindemann), the Intendant writes an open letter to Streicher's obscure paper.

In the same year, the theatre critic Alfred Mühr tackles Gründgens' theater mercilessly. Göring feels addressed and proposes to his Intendant to send the critic to a concentration camp 'for a short vacation'. Gründgens replies: 'Unfortunately that is not possible. I have engaged him to your theater today, as a dramaturge.' When his old chief from Hamburg, Erich Ziegel, is caught by the Nazis, Gründgens takes him to Berlin and saves him from the clutches of the Hamburg Gestapo.

The most famous man who survived Gründgens is Ernst Busch, the communist singer/actor. Busch barely disappears to a concentration camp in 1943, on the intercession of the Intendant, who recruits (and pays for) the best lawyers for Busch. It takes courage to defend a communist in the year the Nazis suffer their first major defeat at Stalingrad." 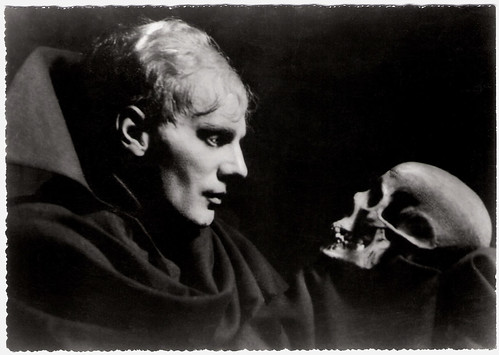 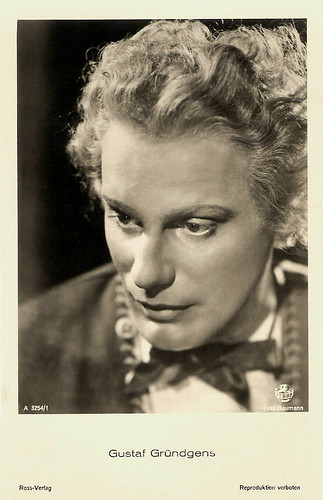 Again the undisputed darling of the Berlin theatre

Another hit was Pygmalion (Erich Engel), 1935) in which he played Professor Higgins opposite Jenny Jugo as Elisa Doolittle. Gründgens tried to keep away from the 'Propaganda and amusement rubbish' in the UFA films. In 1938, he formed his own production company at Terra Filmkunst.

For quite some time he managed to fend off the Nazi culture bosses, but in 1941 he was forced to take part in Ohm Krüger/Uncle Krüger (Hans Steinhoff, 1941), starring Emil Jannings. This propaganda film claimed that the British invented the phenomenon of 'concentration camp' in South Africa.

He also acted in the historical drama Friedemann Bach (Traugott Müller, 1941), a film he also produced. The film depicts the life of Johann Sebastian Bach's son Wilhelm Friedemann Bach (Gründgens), who is shown as a gifted son trying to escape his father's (Eugen Klöpfer) shadow.

When the pressure from Goebbels became too much for him, Gründgens enlisted in the Wehrmacht in 1944, and he ended up in a Russian internment camp in 1945. On the intercession of Ernst Busch, he was released after nine months. In 1946, he played again, on the stages of the Deutsches Theater on Berlin's Schumannstrasse in 'Der Snob' by Carl Sternheim in the role of an opportunist. Klaus Mann - in the uniform of a US army correspondent - sat in the front row.

He became again the undisputed darling of the Berlin theatre. In 1946, Gustaf Gründgens was in dramatically bad health. For years, he had been keeping himself going with painkillers and sleeping pills, and he was heavily addicted to morphine. Yet he became an Intendant twice: first in Düsseldorf and from 1955 in Hamburg. There he staged his last 'Faust' in 1957 and played Mephisto one more time. The lines at the cash register were front-page news one more time.

In 1960, the film Faust (Peter Gorski, 1960) was adapted from this theater production at the Deutsches Schauspielhaus with Will Quadflieg as Faust. Gründgens' last role was Phillips II in Schiller's 'Don Carlos', in 1962. In the summer of 1963, he gave his last television interview on the ZDF, in which he said 'For the past thirty years I have played roles all the time, I have forgotten to live.'

In September 1963 Gründgens left for a world tour. On 7 October 1963, Gustaf Gründgens died lonely in a hotel room in Manila, Philippines, of an internal hemorrhage. He was 63. It has never been ascertained whether or not he committed suicide by an overdose of sleeping pills. His last words, written on an envelope, were, "I believe that I took too many sleeping pills. I feel a little funny or strange. Let me sleep long." He is buried at the Ohlsdorf Cemetery in Hamburg. 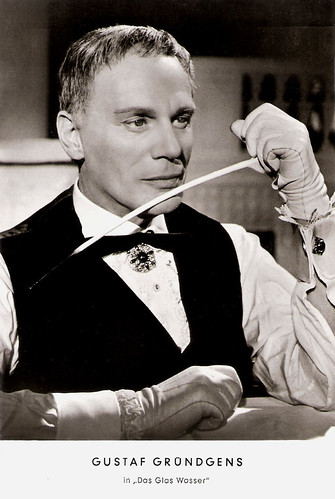 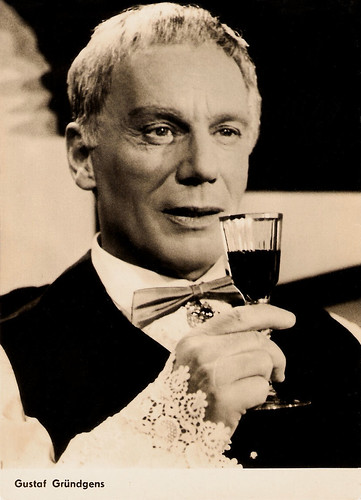 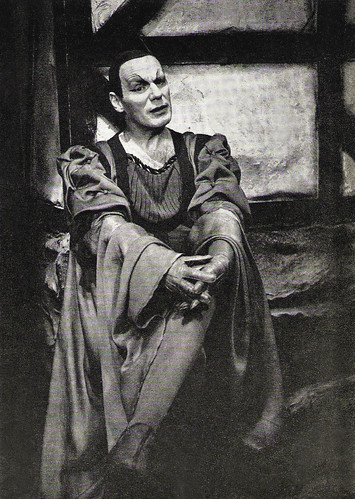