Green-eyed beauty Jean Peters (1926-2000) flashed across the screen in the late 1940s and early 1950s. Peters did not want to be turned into a sex symbol. She preferred to play unglamorous, down-to-earth women. After just seven years as a bright star of 20th Century Fox, she joined in the reclusive lifestyle of her eccentric billionaire husband, Howard Hughes, and became his second wife. 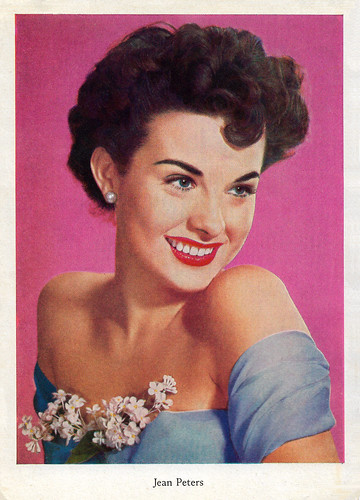 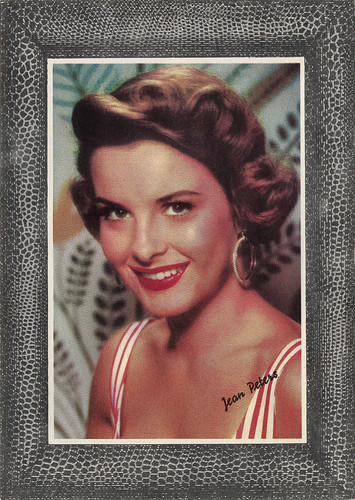 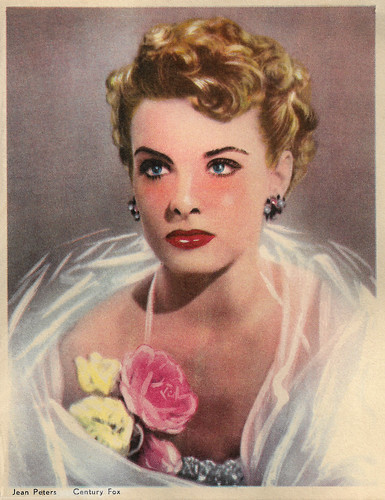 No shrinking violet when it came to defending her interests


Jean Elizabeth Peters was born in 1926 in East Canton, Ohio, the daughter of Elizabeth (née Diesel) and Gerald Peters, a laundry manager. Her father died when she was ten years old. Her mother owned a tourist camp on the outskirts of town and there was enough money around to send Jean to college.

She went to college at the University of Michigan and later the Ohio State University, where she studied to become a teacher and majored in literature. A campus popularity contest she won ended her plans as an English teacher because it came with a trip to Hollywood and a screen test. In short order, "Miss Ohio State University" was offered a seven-year contract at 20th Century-Fox with a starting salary of $150 a week.

It was announced that in her first film I Wonder Who's Kissing Her Now (Lloyd Bacon, 1947), she would play an "ugly duckling", supported by "artificial freckles and horn-rimmed glasses". After being picked by Darryl F. Zanuck to co-star opposite Tyrone Power in the studio's splashy big-budget swashbuckler Captain from Castile (Henry King, 1947), Jean came to the attention of Howard Hughes. She discreetly dated him for the remainder of the decade and continued to live an unpretentious lifestyle, rarely seen in public and eschewing the Hollywood nightlife and parties.

A self-confessed tomboy, she rarely wore make-up in private and preferred to dress in jeans rather than glamorous gowns. She and her mother lived in a smallish bungalow in Bel-Air, paid for by Hughes. After relative success in her second feature, Deep Waters (Henry King, 1948) opposite Dana Andrews, she became increasingly dissatisfied with the prissy roles she was assigned in her subsequent efforts.

She was no shrinking violet when it came to defending her interests: she refused outright to appear in Yellow Sky (William A. Wellman, 1948) - a part she thought as "too sexy" - and Sand (Louis King, 1949). As a result, the studio, frustrated by her stubbornness, put her on suspension. She returned to farm life in Ohio, but was back in New York in 1951 to be screen-tested by Elia Kazan for the epic biopic of Mexican revolutionary hero Emiliano Zapata in Viva Zapata! (Elia Kazan, 1952), shot on location in Mexico with Marlon Brando in the lead. 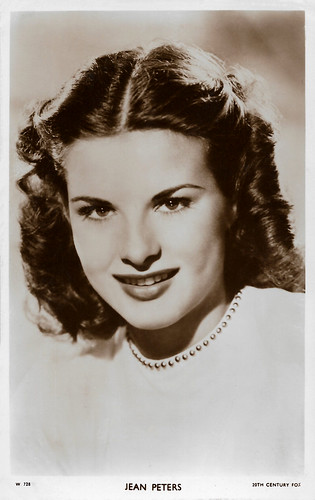 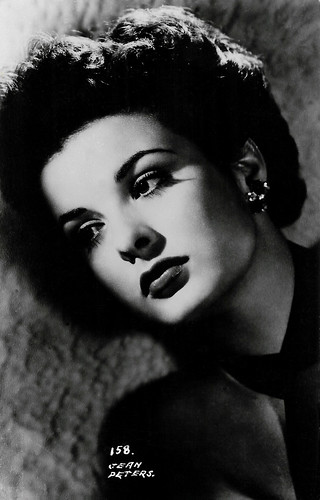 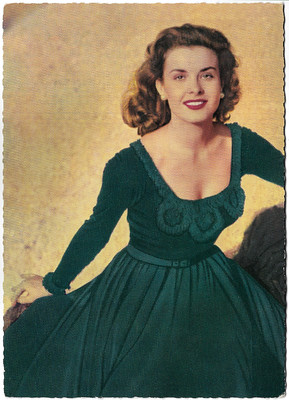 West-German postcard by ISV, no. A 35. Photo: 20th Century Fox. Jean Peters in Three Coins in the Fountain (Jean Negulesco, 1954).


Fox wisely used Jean Peters during the next few years for similarly unglamorous outdoor roles, notably as the titular heroine of Anne of the Indies (Jacques Tourneur, 1951), and a tempestuous girl living in the Georgia swamps in Lure of the Wilderness (Jean Negulesco, 1952). Then followed a gum-chewing dame innocently involved in espionage in Samuel Fuller's Pickup on South Street (1953). Fuller said he thought Peters had the right blend of sex appeal and the tough-talking, streetwise quality he was seeking.

Then she was Burt Lancaster's Indian squaw in the hard-hitting Western Apache (Robert Aldrich, 1954). She got good notices in all of these films and was now recognized as a major star. As a result, she was cast in the prestigious Film Noir Niagara (Henry Hathaway, 1953), opposite Joseph Cotten and Marilyn Monroe (both of whom she befriended), and the Spencer Tracy Western Broken Lance (Edward Dmytryk, 1954).

Under a new contract with Fox, Jean was now no longer in a position to refuse an assignment and, though basically unhappy with her part in Three Coins in the Fountain (Jean Negulesco, 1954), the picture proved to be one of her most popular pictures to date. Her next film, A Man Called Peter (Henry Koster, 1955) starring Richard Todd, was to be her swan song.

Following a 33-day marriage to Stuart Warren Cramer III, a Texan oilman, which ended in a whirlwind divorce, Jean finally married Howard Hughes in a secret ceremony and left public life for the next 13 years. She never gave interviews and retreated to an isolated hilltop mansion above the Santa Monica Mountains.

In 1969 she resurfaced, studying for a degree in sociology at UCLA under an assumed name. When Jean's marriage to Hughes ended in June 1971, the actress settled for the relatively modest sum of $70,000 a year and happily waived any further claims on the estate. That same year she got married for the third time, to 20th Century-Fox vice-president Stanley Hough. Her screen career was briefly resuscitated when she was cast in the miniseries Arthur Hailey's the Moneychangers (Boris Sagal, 1976) and she was last seen in an episode of Murder, She Wrote (1984).

She devoted her final years to charitable causes and never spoke in public about her years with Howard Hughes. Jean Peters died of leukemia in 2000 in Carlsbad, California. 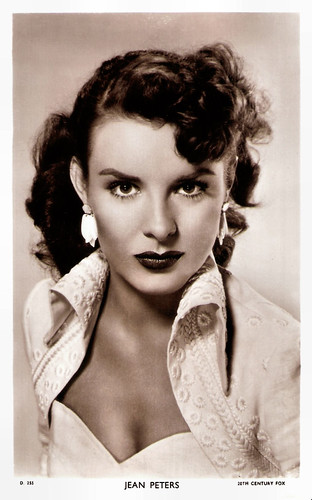 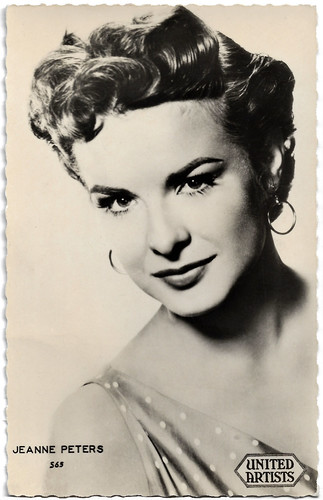 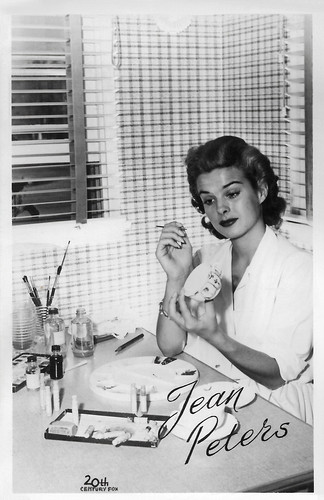