This month, EFSP presents a series of posts on stars of the remarkable Hungarian silent cinema. In the 1910s many famous Hollywood names including Michael Curtiz, Alexander Korda and Bela Lugosi started their film career in Hungary. We will focus on lesser-known but still very interesting Hungarian stars. We start the series with the Hungarian stage and screen actress Juci Lábass (1892-1932), aka Juczi Lábass, who also worked in Germany under the alias Lucie Labass. 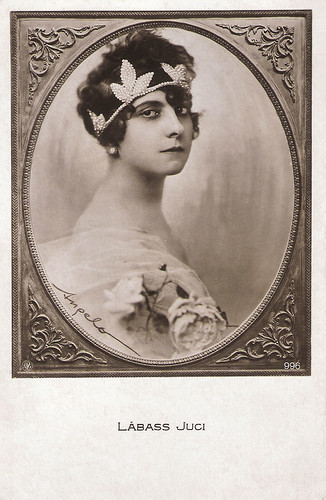 From soubrette to prima donna


Juci Lábass was born Julianna Lábas in 1885 in Zilah, Hungary (the actual Zalau in Romania), as the daughter of Gyula Lábas and Julianna Vidovich. Her voice was already noticed in Subotica as a schoolgirl from Zarda.

In 1910 she studied with Szidi Rákosi. She performed in the Városligeti Theatre Circle, and on 24 May 1913, she appeared in the King's Theatre in the operetta Buksi as Lóri. She also played at the Apollo Theatre. At first, she played the role of the soubrette, then she became a prima donna.

On 20 April 1922, she was a guest at the Municipal Theatre in 'Boccaccio, and in September 1923, she appeared in 'Orpheus'. Also at the Municipal Theatre, she appeared as a guest in the operetta 'Bacchus Night 'on 14 February 1924. From April she was a great success at the King's Theatre in the role of Maritza in Kálmán's 'Countess Maritza'. From 1928 she was a member of the King's Theatre. Her last role was at the Summer Opera Theatre in 1932.

Memorable parts Juci Lábass had as Rolla in 'Mágnás Miska', as Gonda in Leo Fall's 'The Divorced Woman', as Vilma in Franz Lehár's 'The Lark' (A pacsirta), as Serpolette in Planquette's 'The Bells of Corneville', and as Fedora in Kálmán's 'The Circus Princess'.

The Hungarian Encyclopaedia of the Arts of the Theatre described her as follows: "Juci Lábass loves serious and even difficult stage tasks. [...] Her modesty and publicity phobia only add to her value. The beauty and cultivation of her singing voice, her movement, the charm of her appearance in general, are stage armament which will impress her fans and the public in all directions when she has tired of being a girl-staff actress and has finally made the transition to the serious (dramatic) stage." 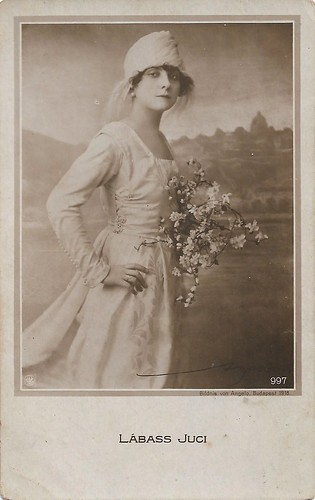 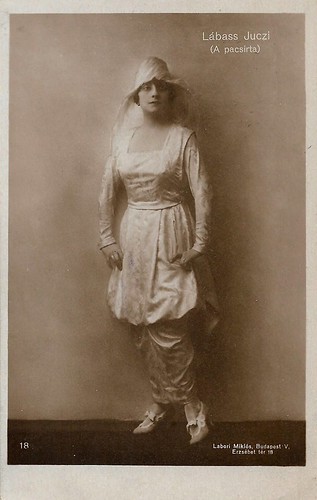 Hungarian postcard. Photo: Miklos Labori, Budapest, No. 18. Juci Labass in the operetta 'A pacsirta' (The Lark) by Franz Lehar.

A modest but interesting film career


Juci Lábass also had a modest but interesting film career. In 1915 she debuted at the Hungarian film company Projectograph in Mihaly Kertesz' (the later Michael Curtiz) film A paradicsom/A Paradise (1915), in which she played a newcomer on the stage, opposite Jenõ Sziklay as a married lawyer.

She remained with Curtiz for the comedy Doktor úr/Mr. Doctor (1916), based on a play by Ferenc Molnár. The male leads were for Márton Rátkai, Labass' future husband, and György Kürthy. Three more silent films followed: A föld rabjai/Slaves of the Land (László Békeffi 1917), Mágia (Alexander Korda, 1917) with Mihaly Varkonyi (the later Victor Varconi), and A Kivándorló/The Emigrant (Louis Neher, 1918). In 1918, Lábass married the actor Márton Rátkai in Józsefváros, Budapest, from whom she divorced three years later.

In 1923 Labass was the star and title character of Ewald André Dupont's melodrama Die grüne Manuela, for which she was credited as Lucie Labass. She played a nightclub dancer who befriends a family who survive by smuggling. She falls in love with Carlos (Josef Winter) but his jealous brother Juan (Kálmán Zátony) betrays him to the authorities. Manuela moreover is courted by the head of the gendarmes (Angelo Ferrari). Repentant Juan stands in for his brother when the latter is about to be executed and Manuela and Carlos flee.

A few decades ago, a print of the film was found at the present Eye Film Museum. A poster of the film is shown in Dziga Vertov's famous film, Chelovek s kino-apparatom/Man with a Movie Camera (1929). Unfortunately, this was Labass' only adventure in the Weimar cinema.

In 1932, at age 40, Juci Labass died in Budapest. Why Labass died so early is unknown although one source suggests it was because of her excessive dieting. 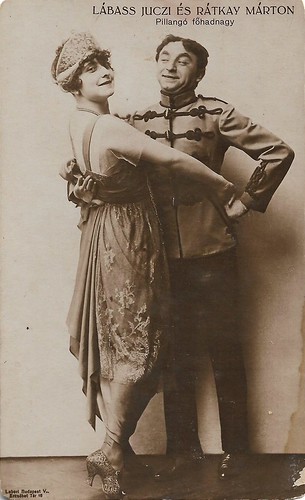