Handsome and sophisticated Swedish film actor Einar Hanson (1899 - 1927) was a popular star of the silent film era, first in Europe, later in the US. In 1927 he was ideally positioned to take over from the late Rudolph Valentino as Hollywood's ‘great screen lover’, but suddenly he died tragically after a freak car accident. 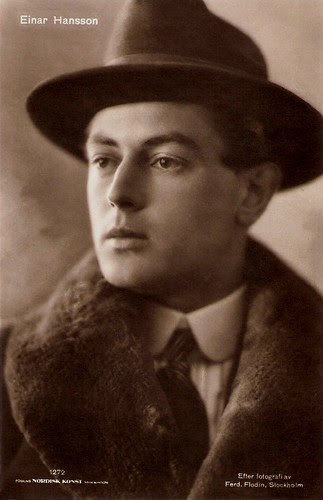 Mauritz Stiller
Einar Hanson (sometimes credited as Einar Hansson of Hansen) was born in Stockholm, Sweden in 1899. Hanson had made his film debut in 1916 in a bit part in Hemsöborna/The People of Hemso (1919, Carl Barcklind), based on a play by August Strindberg. He was discovered at Stockholm's Royal Dramatic Theatre by Finnish-born director Mauritz Stiller, who according to rumor had more than a professional relationship in mind. Stiller cast him as the title character of Gunnar Hedes saga/The Story of Gunnar Hede (1923, Mauritz Stiller), based on the novel by Selma Lagerlöf. Hanson went on to play leading parts in Mälarpirater/Pirates on the Malonen (1923, Gustaf Molander), and Johan Ulfstjerna/Human Destinies (1923, John W. Brunius). In early 1924, Stiller had a big succcess with Gösta Berling Saga. Shortly after, he signed a contract with the largest German film company at the time, Trianon A.G. for two films. He started production in December 1924 on a film version of the novel, Odalisken från Smoln/The Odalisque from Smolensk by Vladimir Semitjov, in Istanbul, Turkey. His other protegee Greta Garbo would play the female leading role, Einar Hanson was her film lover, and Conrad Veidt was the villain. But Trianon went bankrupt and the project was stopped after only three weeks. Stiller sold Garbo’s contract to director Georg Wilhelm Pabst for Die Freudlose Gasse/A Joyless Street (1925, G.W. Pabst). Einar Hanson also played a small part in this now classic film. 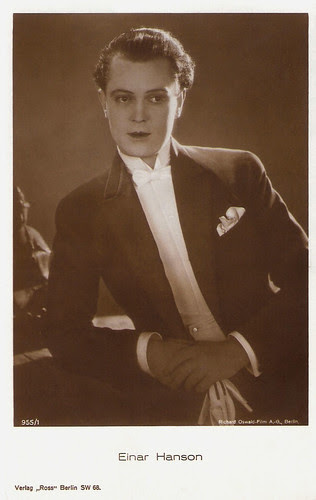 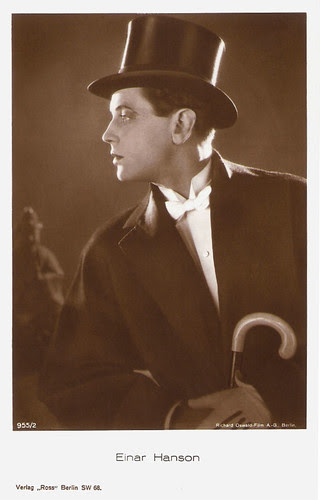 Universal and Paramount
In the summer of 1925 Einar Hanson, Stiller and Garbo traveled to Hollywood. At Universal Studios Hanson starred opposite the ‘Orchid Lady’ Corinne Griffith in Into Her Kingdom (1926, Sven Gade), and opposite another screen diva, Laura La Plante in the comedy Her Big Night (1926, Melville W. Brown). Fan mail began pouring in and Hansen was promised bigger and better things to come by Paramount, who had bought his original five-year contract from Universal. He showed great progress in The Woman on Trial (1927, Mauritz Stiller) and Barbed Wire (1927, Rowland V. Lee) both starring Pola Negri. That same year, he also appeared in The Lady in Ermine (1927, James Flood) with Corinne Griffith, The Masked Woman (1927, Silvano Balboni) with Anna Q. Nilsson, Fashions for Women (1927, Dorothy Arzner) with Esther Ralston, and Children of Divorce (1927, Frank Lloyd, Josef von Sternberg) opposite Clara Bow and Esther Ralston. On 3 June 1927, Einar Hanson was on his way home from having dinner with Stiller and Garbo when his car apparently skidded off the road on the Pacific Coast Highway near Topanga Canyon. He died on the way to the hospital. Barry Paris, in his 1995 biography Garbo says that Hanson met Garbo and Stiller at a party where Hanson became intoxicated and drove off on his own, leading to the fatal accident. When the crew of a tow truck came across Hanson's overturned car, they found him beneath the wreck pinned to the steering wheel, with his pet Airedale standing guard. It was too late. The actor passed away four hours later at a Santa Monica hospital with his loyal pet still at his side. Einar Hanson was only 27.