Austrian singer, stage and film actress Hansi Knoteck (1914) starred in 18 films in just five years - between 1934 and 1939. She often played the natural, sweet Dirndl in Heimatfilms. She continued her film and stage career until the mid-1970’s. 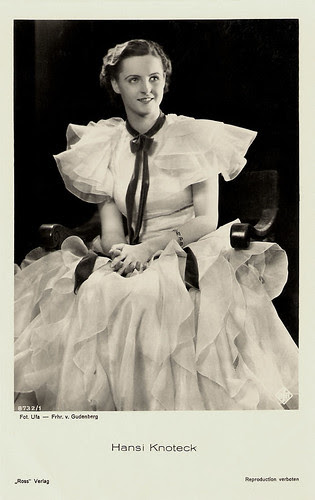 Sweet and Blond
Johanna ‘Hansi’ Knoteck was born in Wien (Vienna), Austria-Hungary (now Austria) in 1914. She was the daughter of an insurance agent and an actress. Her great aunt was Katharina Schratt, a famous actress of the Burgtheater in Vienna. After attending a convent school, Hansi trained as a ballet dancer at the Wiener Hofoper, and later studied for three years at the Wiener Akademie für Musik und darstellende Kunst (Academy of Music and Art in Vienna). Her first engagements were in theatres in Mährisch-Ostrau, Marienbad, and Leipzig. Then she moved to Berlin and began a successful film career at the Ufa studio. As a 20-year-old Knoteck made her film debut with a starring role in Schloß Hubertus/Hubertus castle (1934, Hans Deppe), based on a novel by Ludwig-Ganghofer. She became the successor of the equally sweet and blond Lien Deyers, and would be a predecessor for Maria Schell. Knoteck became popular with her role as the gypsy Saffi in Der Zigeunerbaron/The Gypsy Baron (1935, Karl Hartl) at the side of Adolph Wohlbrück a.k.a. Anton Walbrook. Among her other well known films are the melodrama Fürst Woronzeff/Prince Voronzeff (1934, Arthur Robison) opposite Albrecht Schoenhals, Das Mädchen vom Moorhof/The Girl from the Marsh Croft (1935, Detlev Sierck a.k.a. Douglas Sirk) based on the novel by Selma Lagerlof, the satiric thriller Der Mann, der Sherlock Holmes war/The Man Who Was Sherlock Holmes (1937, Karl Hartl) with Hans Albers and Heinz Rühmann, and Waldrausch/Forest Fever (1939, Paul May) with Paul Richter. She also had a role in the Nazi propagandafilm Ritt in die Freiheit/Ride to Freedom (1937, Karl Hartl) starring Willy Birgel. 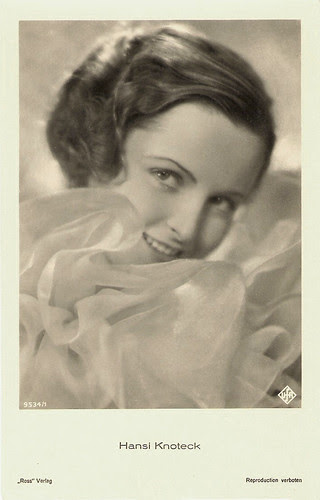 Dirndl in Heimatfilms
In 1940, Hansi Knoteck married Ufa star Viktor Staal, her co-star from Gewitter im Mai/Storms in May (1938, Hans Deppe). They costarred in a total of seven films. She also would interpret seven times the girls and women from the Ganghofer novels. This stereotyping as a ‘natural, sweet soul’ in dirndl dress in Heimatfilms (melodramas with a regional character) was the reason, she could not develop as a dramatic actress in the cinema. But she had stayed faithful to the theatre and always appeared regularly on stage, also during the years she was committed to the Ufa. She played among others the naive Puppi in Richard Billinger's comedy Stille Gäste (Silent guests), starred in the title role of Carlo Gozzi's Turandot, and appeared as the protagonist in Gerhard Hauptmann's dream poem Hanneles Himmelfahrt (Hannele's Ascension). During WWII, she slowed down her film work and worked for the Bavaria studio. From then on, the Staal family lived in Munich. In 1942 their son Hannes was born. Her few films during these years include the comedy Das sündige Dorf/The Sinful Village (1940, Joe Stöckel), Venus vor Gericht/Venus on Trial (1941, Hans H. Zerlett) and Das war mein Leben/That Was My Life (1944, Paul Martin) with Carl Raddatz. Reportedly, Knoteck and her husband were members of the anti-Nazi German-Austrian underground during this period. After the war her old successes with Heimatfilms lead to more roles in this genre. In the 1950’s, the Heimatfilm was at the height of its popularity and the film offers for Hansi Knoteck were more or less limited to this genre. Among these films are Die fidele Tankstelle/The jolly gas station (1950, Joe Stöckel), Grenzstation 58/Border Station 58 (1950, Harry Hasso) with Mady Rahl, and Der Pfarrer von Kirchfeld/The Priest from Kirchfeld (1955, Hans Deppe) with Claus Holm. Then her film career halted. In the 1970’s, Knoteck made a brief comeback with a mother role in the film Der Jäger von Fall/The Hunter from Fall (1974, Harald Reinl), the fifth remake of a 1918 Heimatfilm. It was not a success. Then she finally retired from the film business. Hansi Knoteck and Viktor Staal remained together until his death in 1984. Knoteck lives in Munich. Her son Hannes worked as an architect. 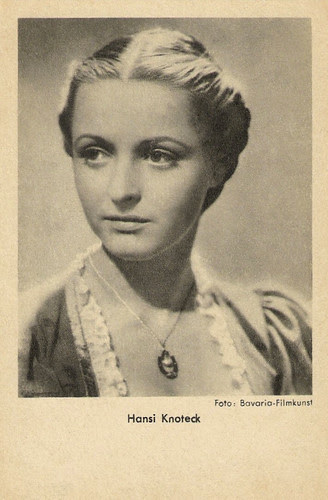