With his sleepy eyes, distinctive eyebrows, and deep, gravelly voice, English actor David Hemmings (1941-2003) was one of the princes of ‘swinging London’ in the 1960s. His role as the fashion photographer in Michelangelo Antonioni’s classic thriller Blow Up (1966) made him an international cinema icon. 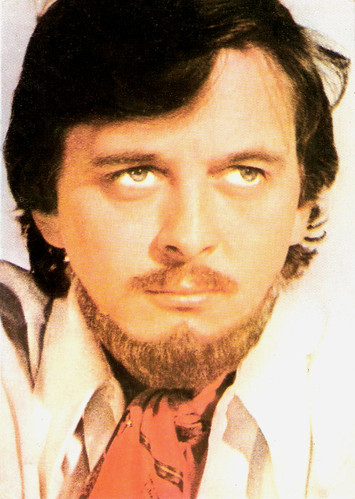 
David Edward Leslie Hemmings was born in Guildford, Great Britain in 1941 to a cookie merchant and his wife. He was educated at Alleyn's School and the Glyn Grammar School (now the Glyn Technology School).

This led the 9-year old to start a professional career performing as a boy soprano in several operatic works by the composer Benjamin Britten. Hemmings played the title role in Britten's 'The Little Sweep' (1952), which was part of Britten's 'Let's Make An Opera!' children's production. Most notably, Hemmings created the role of Miles in Britten's chamber opera 'Turn of the Screw' (1954) with the English Opera Group.

He was renowned for his mature and intelligent vocal interpretations of these parts. His close friendship with Britten is described in John Bridcut's book 'Britten's Children' (2006). Although many commentators identified Britten's relationship with Hemmings as based on an infatuation, throughout his life the actor maintained categorically that Britten's conduct with him was beyond reproach at all times.

He briefly left the musical world when his voice changed. He studied painting at the Epsom School of Art and staged his first exhibition at 15. He returned to singing in his early 20s, first in nightclubs, then on the musical stage.

As a child actor, he had made his film debut in the drama The Rainbow Jacket (Basil Dearden, 1954) for Ealing Studios. He also had a bit part in Saint Joan (Otto Preminger, 1957) featuring Jean Seberg.

When the youth culture hit Britain in the late 1950s, Jon C Hopwood writes at IMDb: “Hemmings was in the right place at the right time to capitalize on his skills and looks. Boyish-looking, with large, protuberant blue eyes covered with heavy lids, his face was at once startling and decadent while simultaneously conveying an air of fragility”.

He appeared as misunderstood youths and belligerent ‘Teddy Boys’, such as in the teen musicals Some People (Clive Donner, 1962), Live It Up! (Lance Comfort, 1964), and Be My Guest (Lance Comfort, 1965). He also played opposite Oliver Reed in the drama The System/The Girl-Getters (Michael Winner, 1964). 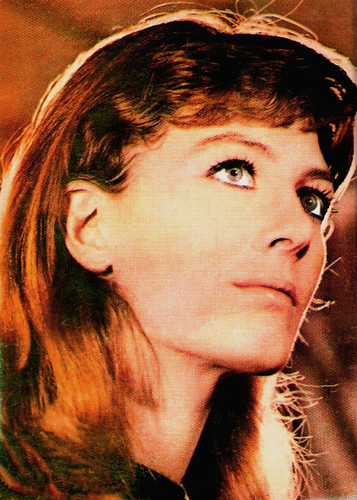 Career-defining role in a groundbreaking movie

In his obituary of Hemmings in The Guardian, Tim Pulleine described how the character “is eventually brought face to face with the illusoriness not only of success but of reality itself. The film's conclusion, in which the photographer is gradually torn into participation in an imaginary game of tennis, must surely rank as one of the most mesmerising in all cinema. Hemmings's physical demeanour, combining down-to-earth chippiness with an almost ethereal air of fragility, admirably embodied the themes of a groundbreaking movie, which dissolved the barriers between art and popular cinema.”

Blow Up made Hemmings an international star and pin-up for a while, a darling of the pop culture filmmaking that was expected to revolutionise the English-speaking cinema in the 1960s.

Following Blow Up, Hemmings appeared in a string of major British films, including the musical Camelot (Joshua Logan, 1967), the war film The Charge of the Light Brigade (Tony Richardson, 1968) and in the title role in the epic film Alfred the Great (Clive Donner, 1969) with Michael York. His short stature, sleepy eyes, and undershot jaw made him an unconventional leading man, but unconventional was right for the times, and he became one of the icons of the ‘swinging London’ scene.

In 1967, Hemmings recorded a pop single, 'Back Street Mirror', and a studio album, 'David Hemmings Happens', in Los Angeles, California. The album featured instrumental backing by several members of The Byrds. Later, Hemmings provided the narration for Rick Wakeman's progressive-rock album 'Journey to the Centre of the Earth' (1974) – an adaptation of Jules Verne's science-fiction novel 'A Journey to the Center of the Earth' (1864). 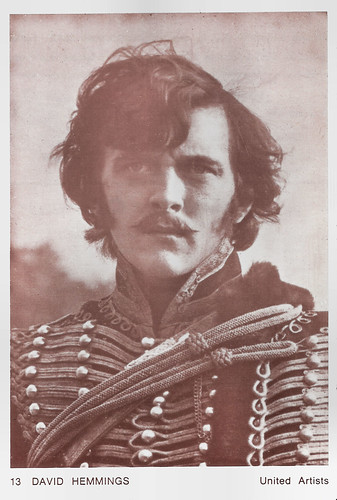 Belgian card by Publishop, Brussels, no. 13. Photo: United Artists. David Hemmings in The Charge of the Light Brigade (Tony Richardson, 1968).


David Hemmings’ career took a new turn when he founded the Hemdale Corporation with business partner John Daly, as a tax shelter and to give him greater control both before and behind the camera. He directed his first film, the suspense thriller Running Scared (David Hemmings, 1972) starring his wife at the time, Gayle Hunnicutt.

In the 1970s, he relocated to Malibu, California to live with Hunnicutt and the fabled beach community which was his home for the next generation. His next film, the drama The 14 (David Hemmings, 1973), won the Silver Bear at the 23rd Berlin International Film Festival. He appeared in the disaster film Juggernaut (Richard Lester, 1974) starring Richard Harris, and the Italian Giallo Profondo Rosso/Deep Red (Dario Argento, 1975).

He directed David Bowie and Marlene Dietrich in the drama Schöner Gigolo, armer Gigolo/Just a Gigolo (David Hemmings, 1978). The film was poorly received, with Bowie describing it as "my 32 Elvis Presley movies rolled into one". As an actor, he worked on the Sherlock Holmes film Murder by Decree (Bob Clark, 1979) with Christopher Plummer and James Mason, and played a vindictive cop in the docudrama film Beyond Reasonable Doubt (1980) about a New Zealand farmer innocently jailed for a double murder but later pardoned.

Hemmings directed the horror film The Survivor (David Hemmings, 1981), starring Robert Powell and Jenny Agutter. In the 1980s he became one of the top directors of American action TV series, like Magnum, P.I. (1980), The A-Team (1983), Airwolf (1984), and Quantum Leap (1989). In some episodes of Airwolf, he also played the role of Doctor Charles Henry Moffet, Airwolf's twisted creator.

For the cinema, he directed the thriller Race for the Yankee Zephyr (David Hemmings, 1981), starring Ken Wahl, and the drama film Dark Horse (David Hemmings, 1992). After a six-year absence, he returned as an actor to feature films to play Uncle Henry in Ken Russell's adaptation of D.H. Lawrence's The Rainbow (1989). He also returned to the voyeuristic preoccupations of his Blow Up character with a plum part as the Big Brother-esque villain in the season-three opener for the television horror anthology series Tales From the Crypt (1991).

In 2000, David Hemmings had another come-back on the screen as Cassius in the historical epic Gladiator (Ridley Scott, 2000), with Russell Crowe. He had become bulkier and the following years he appeared as a character actor in the drama Last Orders (Fred Schepisi, 2001) the film version of Graham Swift's elegiac novel with Michael Caine and Tom Courtenay, and the espionage film Spy Game (Tony Scott, 2001) starring Robert Redford and Brad Pitt.

He appeared as Mr. Schemerhorn in the historical film Gangs of New York (Martin Scorsese, 2002) starring Leonardo DiCaprio. Shortly before his death, he had cameo appearances in the science-fiction film Equilibrium (Kurt Wimmer, 2002) starring Christian Bale, and the superhero film The League of Extraordinary Gentlemen (Stephen Norrington, 2003), with Sean Connery.

In 2003, David Hemmings died, at age 62,. He was in Bucharest, Romania, on the film set of the horror film Blessed (Simon Fellows, 2004) starring Heather Graham. After playing his scenes for the day, he had a fatal heart attack. His funeral was held in Calne, Wiltshire, where he had made his home for several years.

I remember David Hemmings so well, most especially for Blow Up though I don't think I saw that until it had been out a couple of years. The sad thing is, I didn't know he had died, and so young!