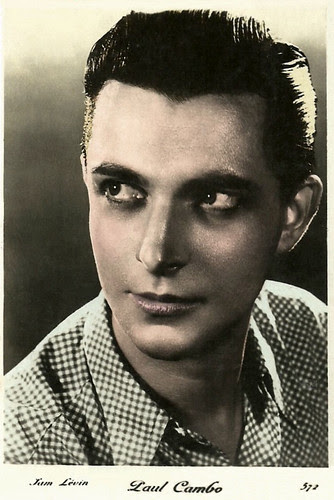 Mexico
Paul Cambo was born Paul-Marius-Raymond Mignonat in Bort-les-Orgues, France in 1908. In 1932 he made his film debut in Chair ardent/Burning Flesh (1932, René Plaissetty) with Jean Marchat. At the end of the decade he had his first lead role in Ramuntcho (1938, René Barberis) opposite stage giant Louis Jouvet. He appeared also as the son of Raimu in the war drama Le héros de la Marne/Heroes of the Marne (1938, André Hugon), and as a Russian prince in Le joueur d'échecs/The Chess Player (1938, Jean Dréville) with Françoise Rosay as Catherine the Second. After the war he worked for some time in Mexico. There he appeared in such productions as El jagüey de las ruinas/The liana from the ruins (1945, Gilberto Martínez Solares), the comedy Ocho hombres y una mujer/Eight Men and One Women (1946, Julián Soler), and El último amor de Goya/Goya's last love (1946, Jaime Salvador). In 1947 he was back in France and played in Le village de la colère/The Village of Wrath (1947, Raoul André) with Louise Carletti In the following decade, he focused on his stage work. In 1956, he acted under the direction of Raymond Rouleau in Edmond Rostand's play Cyrano De Bergerac, at the Theatre Sarah Bernhardt. During this period he only incidentally starred in films.

Don Juan
At the end of the 1950’s, Paul Cambo regularly appeared in French films. He starred opposite Dora Doll in the prostitution drama Miss Pigalle (1958, Maurice Cam). In the entertaining swashbuckler Le Bossu/The Hunchback of Paris (1959, André Hunebelle) he supported Jean Marais and Bourvil. In the early 1960’s he continued to play supporting parts in adventure films with Marais, such as Les mystères de Paris/Devil of Paris (1962, André Hunebelle). On TV he appeared in Madame Sans Gêne (1963, Claude Barma), an adaptation of the Victorien Sardou play featuring Sophie Desmarets. From then on his screen appearances were mostly on television. Very popular was the mini-series Belphégor (1965, Claude Barma) starring Juliette Greco and René Dary. He played the lead in the TV drama Tout pour le mieux/Everything for the best (1969, Jeannette Hubert), based on a play by Luigi Pirandello. In 1973 he reunited with Jean Marais and director André Hunebelle for the mini-series Joseph Balsamo (1973), based on a novel by Alexandre Dumas père. That year he also appeared in a TV version of Molière’s L'école des femmes/The school of women (1973, Raymond Rouleau) starring Bernard Blier and with the young Isabelle Adjani in a supporting part. In the cinema he played with Brigitte Bardot in Don Juan (1973, Roger Vadim), her final leading role in a film as a woman who believes she is the reincarnation of Don Juan. His last small film part was in the comedy La course à l'échalote/The Wild Goose Chase (1975, Claude Zidi) starring Pierre Richard and Jane Birkin. Three years later, Paul Cambo died in Massons-Lafitte, France, at the age of 69.