Belgian actress and singer Angèle Durand (1925-2001) was a popular star in Germany during the 1950s and 1960s. She appeared in several musicals. In both 1956 and 1960 she was a contestant of the German pre-selection for the Eurovision Song Contest. 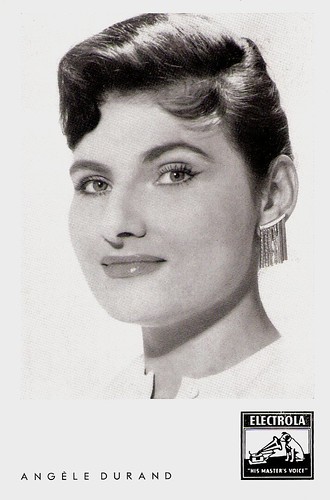 Borrowed Dress
Angèle Durand was born as Angèle Caroline Liliane Josette Marie-José De Geest in 1925, in Antwerp, Belgium. She was the daughter of a diamond merchant and a ballet dancer. Her grandmother was a well known Wagner interpreter. At 15, Angèle made her stage debut as a singer. In a dress borrowed from her aunt she won the second place in a talent competition in the Rubens Paleis (Rubens Palace Theater) in Antwerp. Her voice was dark and typical. She got engagements for the radio, first in Brussels, later for the American station AFN in Stuttgart, Germany. In 1950 she replaced a singer of the legendary Duke Ellington Band during a concert in Brussels. Soon after this successful performance, she made an extended European tour with Ellington. She got more engagements for variety and radio shows in Germany, and in 1950 she had her first hit in both Belgium and Germany with C'est si bon. The following year she also made her first film appearance in the film Die Mitternachtsvenus/Midnight Venus (1951, Ferdinand Dörfler) starring Theo Lingen. In 1951 she met her later husband Nils Nobach, who would become her producer. She appeared in the German success comedy Käpt'n Bay-Bay (1953, Helmut Käutner) as the partner of Hans Albers. Her song So ist Paris (1956) became another international hit. In 1957 she was together with Maurice Chevalier one of the stars of Tivoli in Copenhagen. She also performed in variety shows with stars like Zarah Leander, Edith Piaf and Josephine Baker. 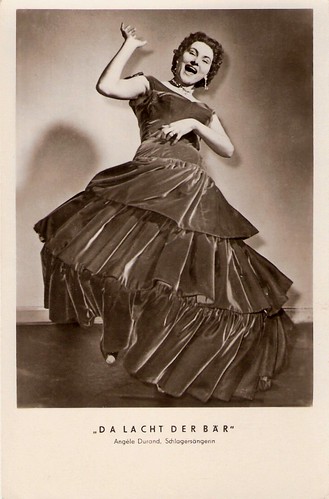 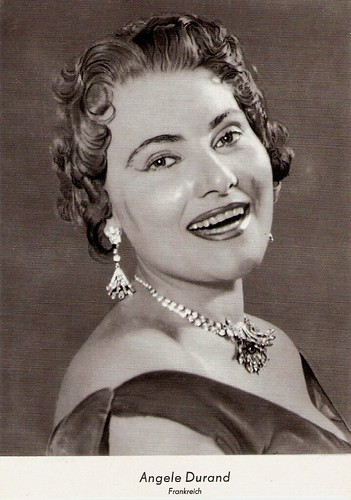 Eurovision Song Contest
In the 1950’s and early 1960’s Angèle Durand appeared in several musicals and Schlager films, like Ein Mädchen aus Paris/A Girl From Paris (1954, Frans Seitz), Die Herrin vom Sölderhof/The Mistress of Sölderhof (1955, Jürgen von Alten) with Ilse Werner, Der Lachende Vagabund/The Laughing Vagabond (1958, Thomas Engel) and Hula-Hopp, Conny (1959, Heinz Paul) with Conny Froboess. In both 1956 and 1960 she was a contestant of the German preselection for the Eurovision Song Contest. In 1960, together with Rex Gildo, she sang the duet Abitur der Liebe. From 1958 till 1961 she was married with producer Nils Nobach. After their divorce she had a new big hit with Ja ich bin die tolle Frau. During a tour she met the Dutch entertainer Lou van Burg, who became her life partner. She became also his manager. In the 1970’s after their separation she started a new career as a theatre actress. She appeared in Germany and France in musicals as Anatevka, Dreigroschenoper (Three Penny Opera) and Hello Dolly, and also made a solo program, Das Theater und ich (The theater and me). In 1976 she appeared in the documentary Ich bin ein Antistar - Das skandalöse Leben der Evelyn Künneke/I'm an Antistar (1976, Rosa von Praunheim), about the life and career of the German singer Evelyn Künneke. In 1977 Durand’s song Chanson d'amour (1958) would become a huge hit in a new version of the group Manhattan Transfer. She often was seen on radio and TV, like in an episode of the popular Krimi  series Tatort (1982). Angèle Durand died in 2001 in Augsburg, Germany. She was 76. 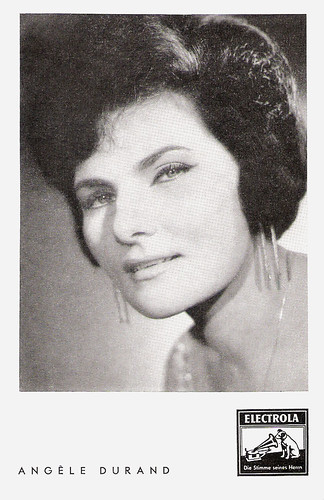 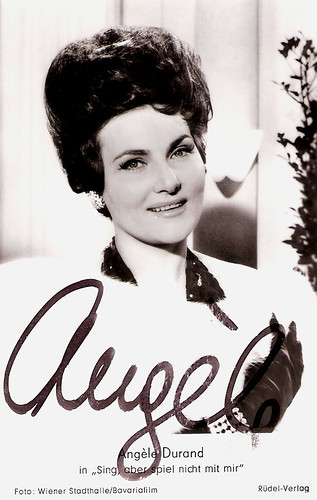