André Bourvil or simply Bourvil (1917-1970) was an endearing comic French actor and singer. He is best known for his roles opposite Louis de Funès in the classic comedies Le Corniaud (1965) and La Grande Vadrouille (1966). 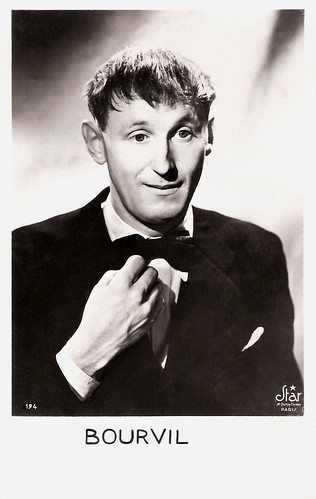 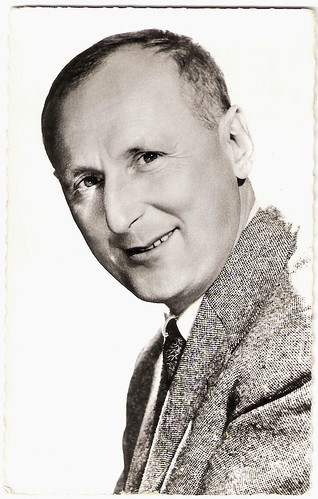 The Famous Bearded Woman
André Bourvil was born as André Robert Raimbourg in Prétot-Vicquemare, France in 1917. His father was killed in the First World War before Bourvil was born. As a result, he spent his entire childhood in Bourville in the region of Normandy. The name of the village later inspired his stage name. He finished school at the age of 15 and began to work in a patisserie. He was already playing harmonica, mandolin and cornet when he engaged himself in a village band. During the Second World War, he joined the army as a trumpet player. While making a music-hall show for the troops, he changed his name into Andrel as his idol Fernandel from whom he was singing songs. He left the army in 1940, and returned to Paris. He did odd jobs to make ends meet. For a while, he worked as an accordionist to accompany Bordas, the famous bearded woman. He began to write his own songs, making a name by himself, and took a new name, Bourvil, in 1942. He appeared in various night clubs in Paris an began to be recognized as a stand-up comic. In 1943, Bourvil married Jeanne Lefrique, and they would stay devoted to each other for the rest of their lives. In 1944, Bourvil was engaged by Michel Fortin to replace the comedian Paulin, and created the character for which he is probably best known, the naïve peasant farmer. In his act he was dressed as if he had grown too fast for the shirt he wore, and he had his hair coming down on his forehead. At the end of the war, his appearances at Radio Luxembourg extended his fame. 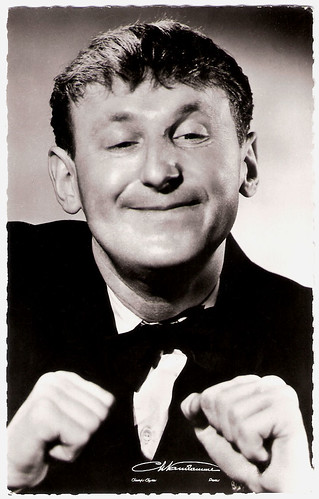 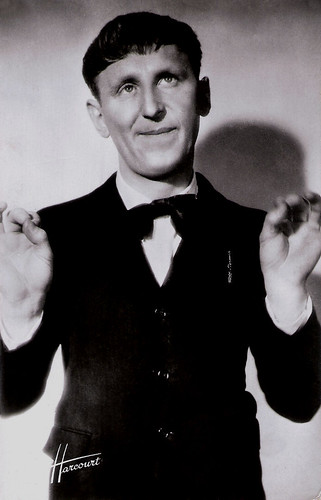 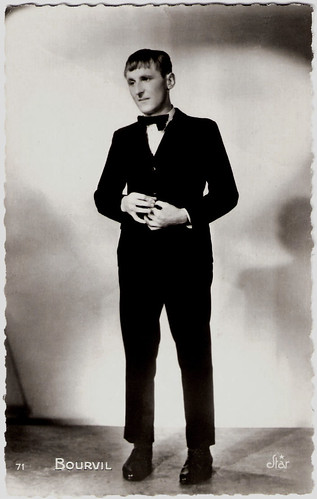 The Sucker
By 1946, Bourvil was a household name in France. He began to record the first of his 300 recorded monologues and songs. He had performed one of his songs in his first film La Ferme du pendu/Hanged Man’s Farm (1945, Jean Dréville). This would be followed by similar performances in other films. And thus the popular music hall entertainer found his way into the cinema. His early film parts were extensions of the simple minded but crafty native. They offered little opportunity for him to build a reputation as an actor, but he finally showed signs of his real potential as a film actor in La traversée de Paris/Four Bags Full (1956, Claude Autant-Lara), in which he starred with Jean Gabin as a pair of unlikely black-market operators. The film established Bourvil’s credentials as an actor and opened up a whole new career. Bourvil’s greatest popular successes came under the direction of Gérard Oury in Le Corniaud/The Sucker (1965, Gérard Oury) and La Grande Vadrouille/Don’t Look Now – We’re Being Shot At (1966, Gérard Oury). In these films Bourvil was the gentle working class man opposite the energetic Louis de Funès. The partnership worked perfectly: there was a unique synergy. Bourvil's good natured, easy going characters not only managed to make us laugh but also to save themselves from whatever adversity Fate - or the temperamental, near-paranoid perfectionist De Funès - happened to throw in his path. James Travers at Films de France: “Le Corniaud was one of the first in a series of enormously successful big budget comedy extravaganzas to be made in France. Although it now appears modest in comparison with what was to follow, this film was in a different league to previous French film comedies – which tended to be studio-bound, low budget and almost exclusively targeted at a home market. The success of Le Corniaud came as a total surprise to its production team. With an audience of 9 million spectators in France alone, it became the most popular film in French cinema history at that time – and by a wide margin”. The success of Le Corniaud almost necessitated a sequel. Oury resisted the pressure to make a Corniaud II and instead opted for a wartime comedy, La Grande vadrouille. That film re-united Bourvil and De Funès and became the most popular film in French cinema history, achieving more than double the audience of Le Corniaud. 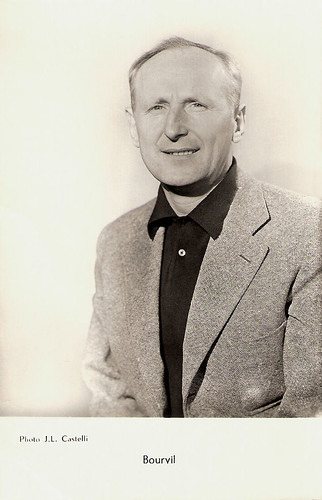 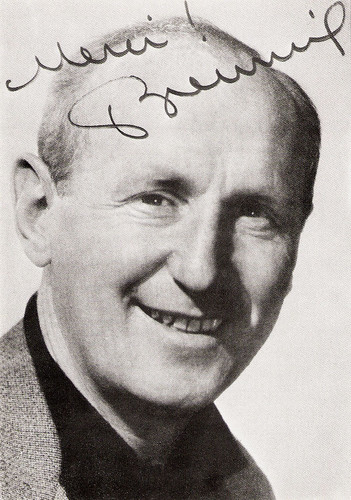 Bourvil starred also in Oury’s next comedy Le Cerveau/The Brain (1969, Gérard Oury), this time opposite opposite Jean-Paul Belmondo as two wannabee train robbers. Although not so successful as Oury two previous films, Le Cerveau attracted five and half million spectators in France and had comparable returns from America. Bourvil was also capable of more dramatic roles. In 1948 he had taken part in the complete recording of Jacques Offenbach's The Tales of Hoffmann, conducted by André Cluytens. Bourvil played the four 'servant' roles opposite artists of the Paris Opéra-Comique. He had also played the supporting part of a French mayor in the famous war film The Longest Day (1962, Ken Annakin, Andrew Marton, Bernhard Wicki, Darryl F. Zanuck). In L'Arbre de Noël/The Christmas Tree (1969, Terence Young), he played a handyman who observes the relationship between a man (William Holden) he works for and the young son who has fallen ill and has just a few months left to live. The audience can identify with the character played by Bourvil, just as they can in his comic roles. Notable are also his role of the villainous landlord Thénadier in the film adaptation of Les Misérables (1958, Jean-Paul Le Chanois), and one of his last roles as the policeman Mattei in Melville's masterpiece Le Cercle rouge/The Red Circle (1970, Jean-Pierre Melville) starring Alain Delon. James Travers reviews at Films de France: “Most surprising is the casting of Bourvil in the part of a rough and, in fact, rather nasty police inspector. (...) With a toupee and smart suit, Bourvil is transformed from his familiar comic persona and gives an extraordinarily believable – and rather touching – performance.” After a battle with Kahler's syndrome, which attacks the bone marrow, André Bourvil died in 1970 in Paris. He was 53. Bourvil and his wife Jeanne Lefrique had two children. Bourvil was to play in the comedy La folie des grandeurs/Delusions of Grandeur (1971, Gérard Oury) opposite Louis de Funés but he died a few months before the beginning of the shooting. He was replaced by Yves Montand.