English actress Vesta Tilley (1864 – 1952) was the most famous and well paid music hall male impersonator of her day, nicknamed ‘The London Idol’. She was a star in both Britain and the United States for over thirty years. Tilley also appeared in some very early silent films. 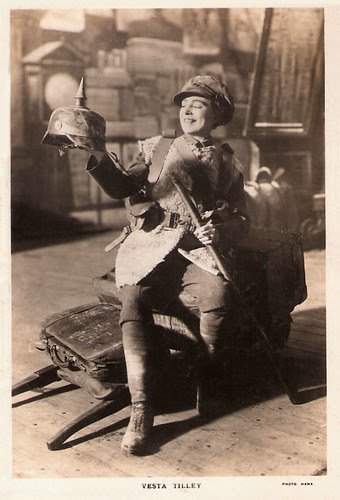 Girls are the Ruin of Men
Vesta Tilley was born as Matilda Alice Powles in Worcester, England in 1864. She was the second of thirteen children. Her father was an ex-factory worker who worked as a comedy actor and sometimes as a theatre manager, using the name Harry Ball. His daughter first appeared on stage at the age of three and a half. Managed by her father, she was soon performing regularly, billed as ‘The Great Little Tilley. Tilley was the family’s nickname for Matilda. At the age of six she did her first role in male clothing under the name Pocket Sims Reeves, a parody of then-famous music-hall singer, J. Sims Reeves. It was a great success and her father quickly developed her music-hall act into a series of male impersonations, for which she wore specially tailored costumes. She would come to prefer doing male roles exclusively, saying that "I felt that I could express myself better if I were dressed as a boy". At the age of 11 she debuted in London at the Canterbury Hall the name Vesta Tilley. ‘Vesta’ referred to the trade-mark of the most popular safety-match, 'Swan Vesta'. In 1877, she performed in Portsmouth in her first pantomime and, the following year, made her first major London theatre appearance at the Royal Holborn. Tilley began to be known for her singing of comic numbers, including ‘Girls are the Ruin of Men’ and ‘Angels without Wings’, both by George Dance. In 1890 she married Walter de Frece, who was active in theatre management. Under his management, she established herself as one of the highest paid and most loved music-hall performers. The V&A site describes her stage act: “Tilley rehearsed her act down to the last detail, practising every word and every gesture. She impersonated dandies and fops and her dress was so immaculate that she became a fashion icon for men. She revealed male foibles and eccentricities, which were especially appreciated by the women in her audiences.” In 1894, Vesta Tilley embarked on her first tour of the USA, starting at Tony Pastor's music hall in New York. She became almost as popular in America as she was in Britain and would return to the US on subsequent tours playing in New York and Chicago. In 1900 she made her film debut in the short The Midnight Son (1900, Walter Gibbons). The 3 minutes-long film was produced by Gibbons' Bio-Tableaux. Gibbons also made with her Louisiana Lou (1900, Walter Gibbons) and Algy the Pickadilly Johnny (1900, Walter Gibbons). The latter was based on her act Algy, ‘The Piccadilly Johnny with the Little Glass Eye’. Algy was described as ‘the most perfectly dressed young man in the house’. In the cinema she also appeared in the silent short Please Conductor, Don't Put Me Off the Train (1907, Arthur Gilbert) for Gaumont. 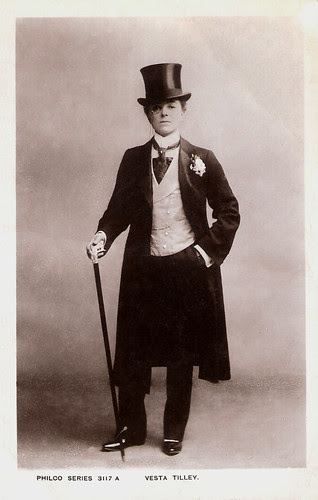 British postcard by the Philco Publishing Co, London, no. 3117 A. 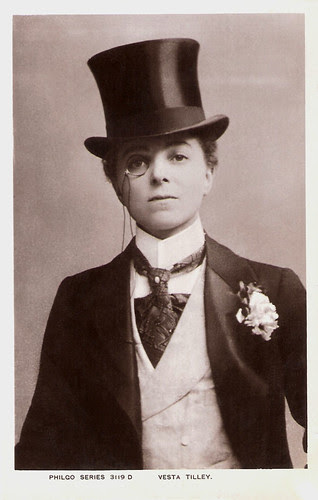 British postcard by the Philco Publishing Co, London, no. 3119 D.

I've Got a Bit of a Blighty One
In 1912 Vesta Tilley appeared in the first Royal Variety Performance, again as Algy. It is said that Queen Mary was so shocked to see Tilley wearing men's trousers that she buried her head in her program. Tilley's popularity reached its all-time high point during World War I, when she and her husband ran a military recruitment drive, as did a number of other music-hall stars. In the guise of characters like 'Tommy in the Trench' and 'Jack Tar Home from Sea', Tilley performed songs like ‘The army of today's all right’ and 'Jolly Good Luck to the Girl who Loves a Soldier'. This is how she got the nickname Britain's best recruiting sergeant - young men were sometimes asked to join the army on stage during her show. She was prepared to be a little controversial. Famously, for example, she sang a song ‘I've Got a Bit of a Blighty One’, about a soldier who was delighted to have been wounded because it allowed him to go back to England and get away from extremely deadly battlefields. Tilley performed in hospitals and sold War Bonds. She also starred in the film The Girl Who Loves a Soldier (1916, Alexander Butler). It was a war drama about a tomboy who becomes a nurse and poses as a man to deliver her wounded fiancé's dispatches. After the war, Tilley’s husband Walter de Frece was knighted in 1919 for his services to the war effort. Vesta Tilley became Lady Matilda Alice de Freece and so she decided that, with her husband's title and intention to enter the world of politics, it was no longer appropriate for her to perform in the variety theatre. Although she had contracts for stage appearance for the following six years, she announced that she would retire. Tilley made her last performance in 1920 at the Coliseum Theatre, London, at the age of 56. Nearly two million people signed the People’s Tribute to her. In the 1924 elections, she campaigned for her husband, who was duly elected as a Conservative Member of Parliament. Upon his retirement in 1931, they moved to Monte Carlo. She returned to England after her husband's death in 1935. Her autobiography, Recollections of Vesta Tilley, was published in 1934. Vesta Tilley died in London in 1952, aged 88. 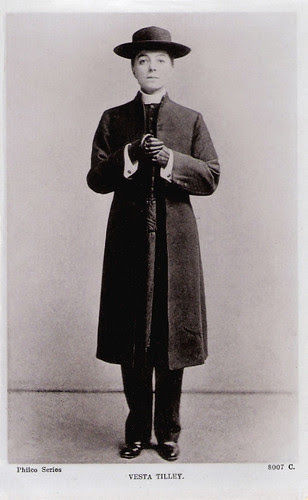 British postcard in the Philco series, no. 8007 C.